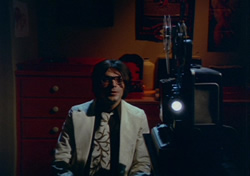 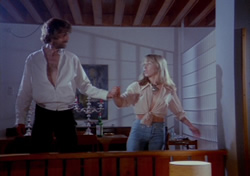 If ever a film had an accurate title, this would be it. Made in the early days of Greek exploitation, this outrageous thriller piles in so many exploitation elements it's amazing the whole thing gels into a coherent storyline... but it does, and then some.

The action starts at a nightclub called Club Tango where we meet coke-dealing gigolo sleazeball misogynist Stathis (Daniels, aka busy actor Lakis Komninos) and his put-upon blonde girlfriend, Joanna (Four Dimensions of Greta's Raffael), who's starting to pick up a nasty drug habit under his influence. She's not happy about the fact that Stathis makes money by sleeping with middle-aged women at the home of his ultra-neurotic buddy, Joachim (Voulgaridis), whose bedroom he uses for his drug-fueled sex encounters.

As it turns out, Joachim doesn't mind since, unbeknownst to everyone else, he's set up a film camera and projector behind a two-way mirror where the poor impotent sap can watch all the debauchery at any time while puffing on a smoke. One of Joachim's regulars, 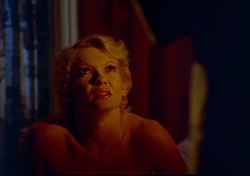 bisexual libertine Rosita (Moore), decides to entertain herself by seducing Joanna in that same bedroom, only for Stathis to burst in and start smacking the bejeezus 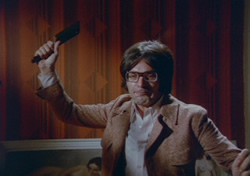 out of both women. Joanna flees in a panic, while Stathis' battery results in Rostia's death after she cracks her head on a dresser. Of course Joachim catches the whole thing on film, and when Stathis leaves the body behind, the voyeur quickly discovers a cure for his impotence: necrophilia! After having his way with Rosita's body, Joachim dumps her off a cliff in a stolen car to cover up the crime... but the nastiness is just beginning as both men embark on a sick battle of wits with Joanna stuck in the middle.

A crackpot cult film still waiting to be discovered, this one doesn't have a single dull frame for its entire running time. Splashy colors, funktastic dance routines, sicko plot twists, and a very uninhibited cast (everyone but Daniels spends a large amount of screen time disrobed) ensure you have no idea where things are headed every few minutes, and it's all shot with plenty of style by director Kostas Karagiannis (under his occasional nom de sleaze, Dacosta Carayan), who dabbled in pretty much every genre in Greek cinema and went on to helm the much more mainstream The Devil's Men. Daniels has the showiest role as the utterly despicable Stathis, managing to keep his character fascinating while plumbing moral depths that will have you shouting for his head by the time the climax rolls around. Raffael and Moore provide the obligatory good and bad girl roles (with the latter showing skin even well after her demise, uncomfortably enough), and Voulgaridis stays pathetic enough to engender a little sympathy even when he goes way off the deep end. His giddiness at discovering the joys of sex with women of both 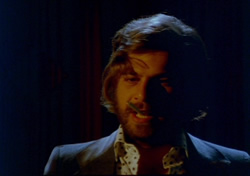 the breathing and non-breathing variety has to be seen to be believed, giving the film's sunny romantic montages a twisted bent that few other filmmakers would ever attempt.

Essentially unknown in America but given a modest English-dubbed release in a handful of other territories like Canada and the UK, this psychotic gem has been given a deluxe release from 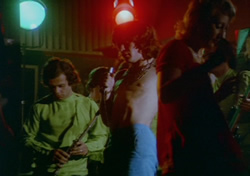 Mondo Macabro complete with a disclaimer about the uneven transfer being sourced from the best material available. They didn't need to worry though since it still looks great; apart from a tiny handful of scratches, the image quality is very nice for standard def with super-saturated colors and reasonably decent detail. The surprisingly solid English dub track is included (complete with Anglicized names for some of the characters) along with the Greek audio, plus optional English subtitles (not dubtitles but a translation of the Greek dialogue). The film was intended to be exported as widely as possible so the primary actors more or less spoke their lines in English with voice actors looping them in later, so either track works well enough.

On the extras side you get the alternate English-language opening credits culled from the British VHS release, three thorough bios for Komninos/Daniels, Karagiannis, and composer Yannis Spanos (seriously, you'll be dying for a soundtrack release after watching this), a text interview with producer Antonis Karatzopoulos, an "about the film" essay (tying this to the popular giallo films of the period and its companion film, The Wife Killer), the usual Mondo Macabro promo reel for additional titles, and a 24-minute featurette, "Sunshine and Shadows," with critic/musician Akis Kapranos covering the sex and violence bases in Greek cinema from its early days into the '70s with additional titles like The Brave Bunch and The Pussycat Syndrome.