For those who think the 1950s were a wholesome, straitlaced decade devoted to promoting nuclear family values, let's just remember one of its most significant contributions to popular culture: EC Comics, the notorious comic book company whose volumes like Tales from the Crypt entranced 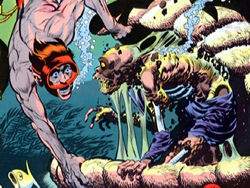 a generation of impressionable kids and outraged their parents enough to prompt legal action. Though EC eventually had to retire its ghastly offerings by 1954, the influence lasted for decades as those same kids grew up into the writers and directors who revolutionized the genre beginning in the 1970s.

Told in linear fashion from EC's beginnings as the brainchild of comic pioneer William Gaines, this documentary covers all of the bases with an engaging and flashy style that often replicates the comic book format, complete with gaudy lettering and sliding panels. Interview subjects include EC editor and artist Al Feldstein, artists and comic historians like Jack Davis, Al Williamson, Jack Kamen, Marie Severin, Robert Overstreet and Russ Cochran, and "EC children" like George A. Romero, John Carpenter, and Goosebumps' R.L. Stine. The Tales from the Crypt TV series (which lifted its plots directly from the comic pages) also gets its due with a variety of clips and comments from producer Joel Silver. The docu features a huge amount of colorful artwork from the

original comic books, plenty of rare photos and anecdotes, and a clear-eyed view of the moral panic that ensued as children were presumably being turned into deviants thanks to reading about reanimated corpses, slaughtered spouses, and various creatures of the night. While it would be nice to say that we now know better and can give kids credit for distinguishing between utter fantasy and reality, times have sadly not changed much at all in our PG-13-safe world.

Originally aired in truncated form on American Movie Classics, Tales from the Crypt: From Comic Books to Television! appears on DVD in a longer "director's cut" complete with a spiffy 5.1 audio mix. The documentary flows much better without those pesky commercials and does a good job of offering a cohesive but concise history of the magazine (apart from short-changing the Amicus years in the 1970s, with only 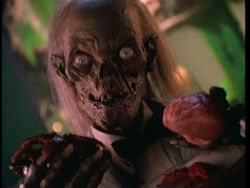 the theatrical trailer from Tales from the Crypt popping up briefly as a token nod). Image and sound quality are excellent, and lest any buyers have misgivings about the short running time, note that the feature itself is only a small percentage of the content on this double-disc set.

Apart from the documentary, disc one also contains an entertaining video segment in which Feldstein and writer Ray Bradbury (whose work inspired a handful of EC tales) sit down for the first time on camera with comic historian Jerry West for a look back at the golden days of EC. Bradbury's an engaging speaker as always, and Feldstein manages to keep up every step of the way. Disc two contains an avalanche of additional interview material: bonus interviews with Romero, Cochran, and Overstreet; interviews with the EC artists; a video visit with Kamen (designer of the Creepshow one-sheet poster) including a look at his son's massive collection of Kamen art; and a video segment with EC expert Roger Hill who offers an interesting look at the self-censorship involved in one of EC's most notorious covers, showing an axe murderer wielding a woman's severed head. Great stuff all around, and anyone with an interest in this vital aspect of horror history should find their time more than rewarded.