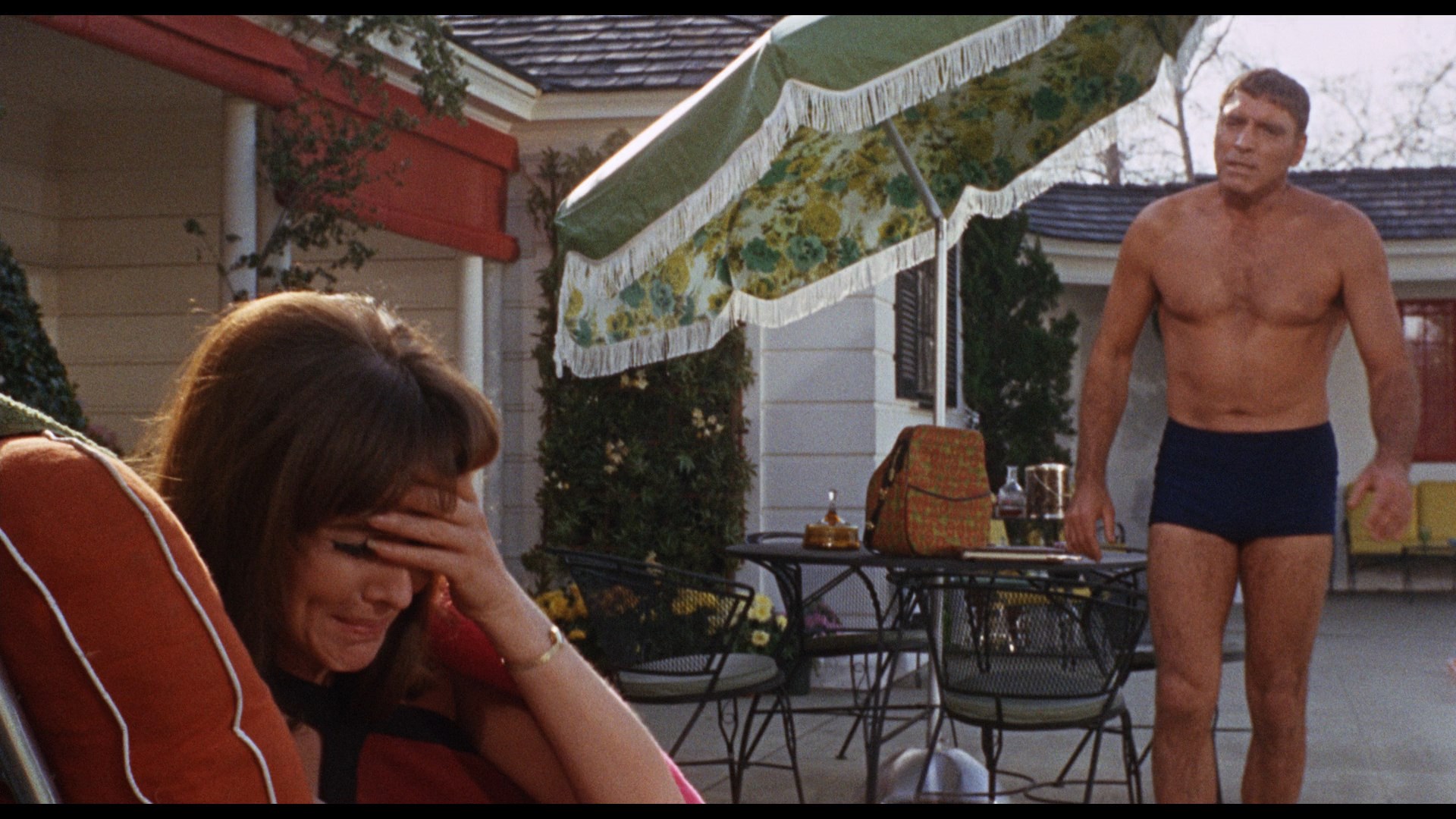 Grindhouse Releasing has certainly never been a label you could call predictable, 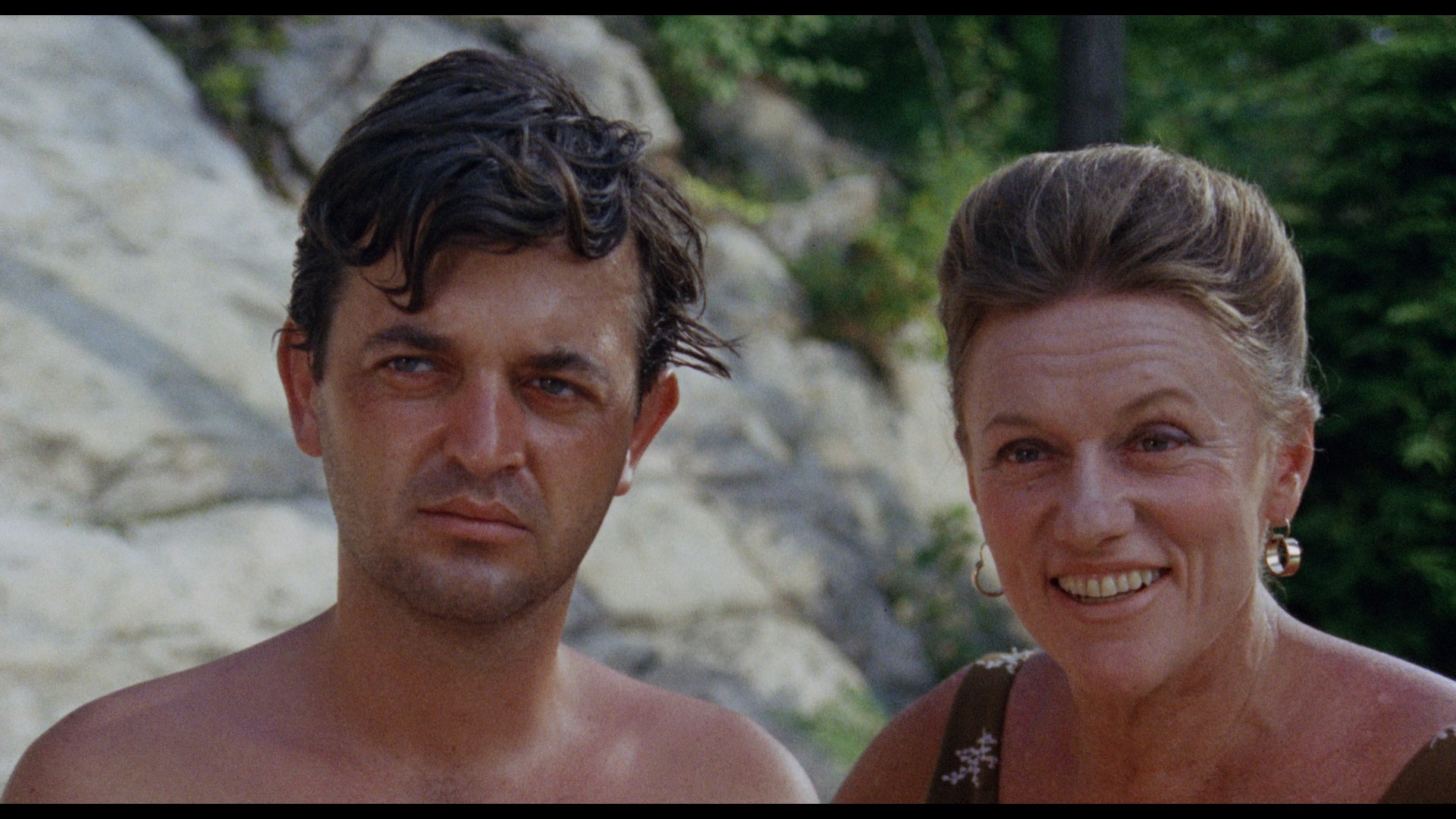 and after Corruption and The Big Gundown, they throw out their most unexpected curveball from their welcome alliance with Sony Pictures to date with The Swimmer. A spooky, arty reverie on the pitfalls of entering middle age in America's most volatile period, The Swimmer is based on a story by John Cheever, a favorite of English teachers keen on exposing the dark underbelly of the suburban experience, and that attitude certainly carries over here. One of the most reliable square-jawed stars of his era, Burt Lancaster stars as Ned Merrill, a man who emerges in swimming trunks from a run in the woods to take a dip across town at the house of a friend's family. Sunday morning drinks are already being poured all around, and looking out at the terrain he observes, "Pool by pool they form a river, all the way to our house," about the string of swimming pools dotting the county's landscape. He decides to swim across each one to get back home, and along the way he runs into various acquaintances who all seem to be living in various degrees of comfort with their suburban luxuries. More disturbingly, their memories don't quite gel with Ned's when it comes to his family, and some of them are downright hostile.

At the time of filming, The Swimmer was a major studio breakthrough for director Frank Perry, who had proven his mettle with David and Lisa and the harrowing Ladybug Ladybug, and his wife Eleanor, an accomplished, Emmy-winning screenwriter. Ultimately the power dynamics of studio production took the film from Perry's hands, with many other parties becoming editorially involved (and Sydney Pollack brought in to shoot additional scenes). The experience didn't harm his career, however, as he went on to a string of sterling films over the next 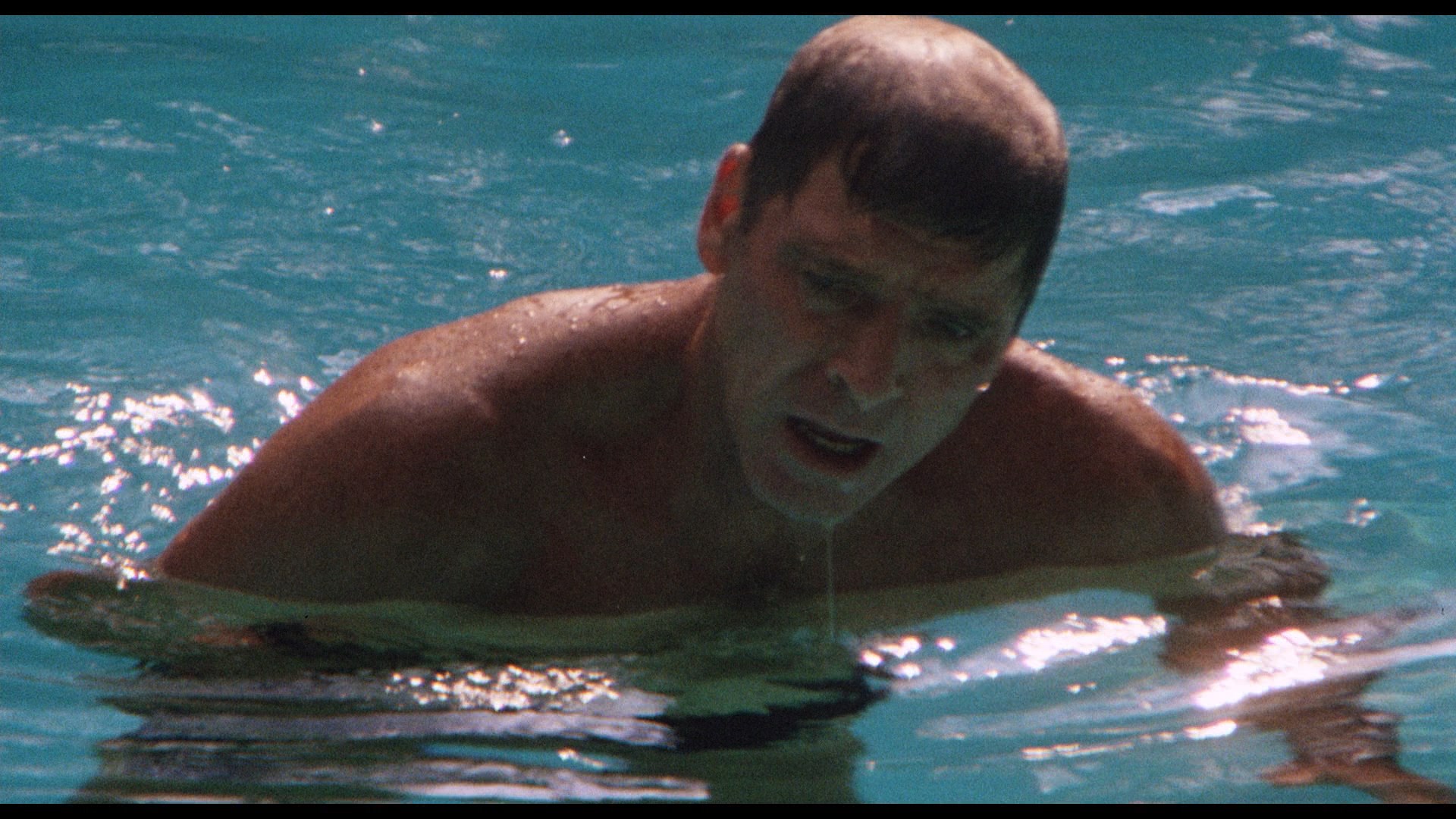 decade including Last Summer, Diary of a Mad Housewife, Play It As It Lays, Man on a Swing, and Rancho Deluxe. (The '80s weren't so kind, however, in what turned out to be a real life echo of the ending of this film.) Despite its production issues, the film turned 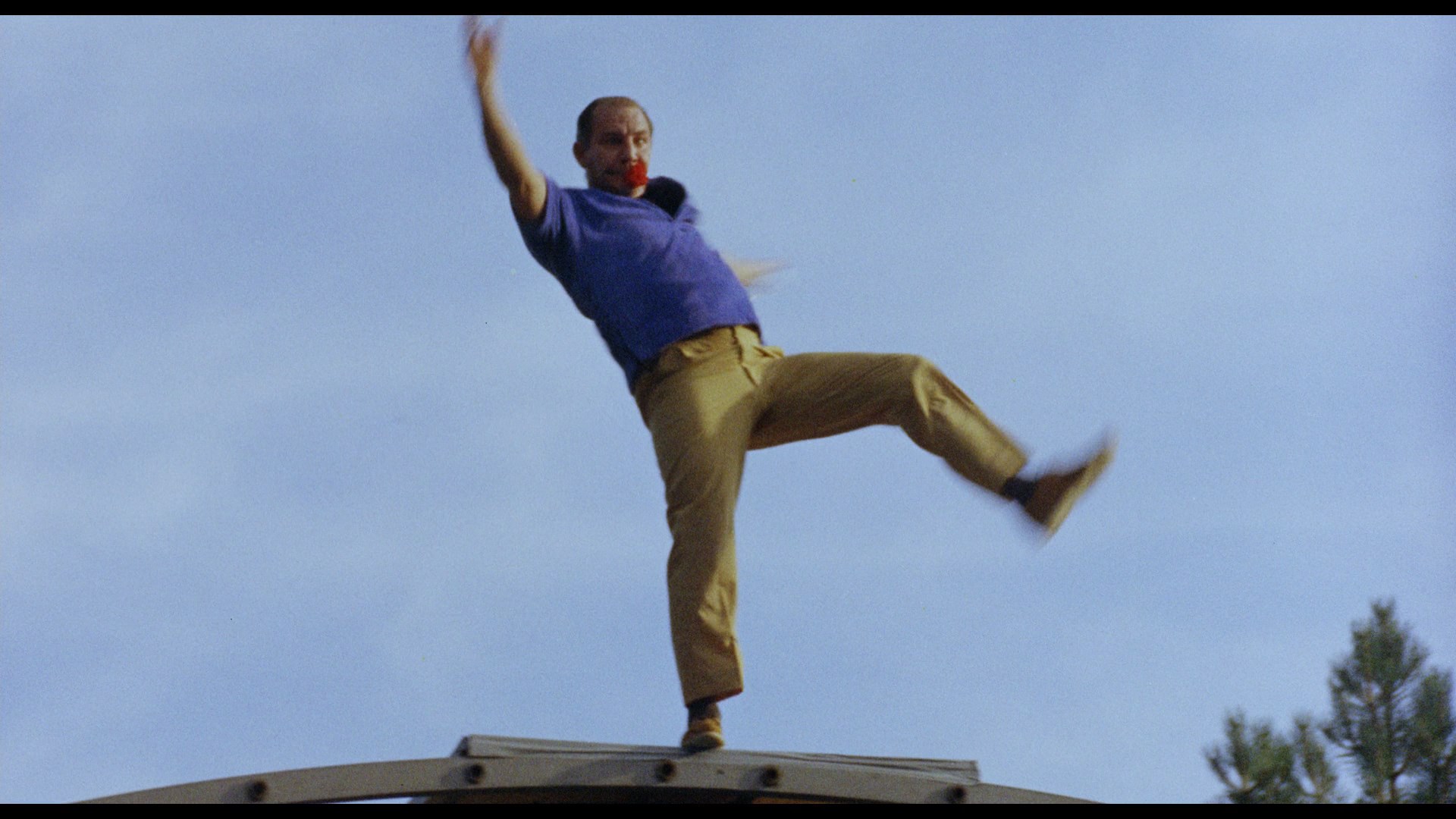 out to be a critical success and a cult favorite whose reputation has endured through the years. Perhaps because of its wistful distance from the culture of the time, the film doesn't feel particularly dated and would still play well opposite many art house films today. (And just for fun, try watching this as a companion film with High Plains Drifter, which shares some surprising thematic similarities.)

Columbia and then Sony have kept this film more or less in circulation since its release, including editions on both VHS and DVD. However, the much-needed special edition by Grindhouse easily eclipses them all both in terms of technical presentation and supplements courtesy of a dual-format Blu-ray and DVD set. The transfer is up to the usual Sony standards with that fantastically saturated color palette found in all of their late '60s output, and in HD it really looks fantastic. There hasn't been any ridiculous digital manipulation, either; it still looks like film all the way. Audio options include a DTS-HD mono track (which sounds great) and, in a nice gesture, an isolated stereo presentation of the music score by Marvin Hamlisch (his film debut). The music has come under fire by some as being inappropriate, but seen today its lilting maudlin quality seems appropriate as a twisted echo of the sunny TV commercial mentality targeted by the film itself. Subtitles are provided in English, French, and Spanish. 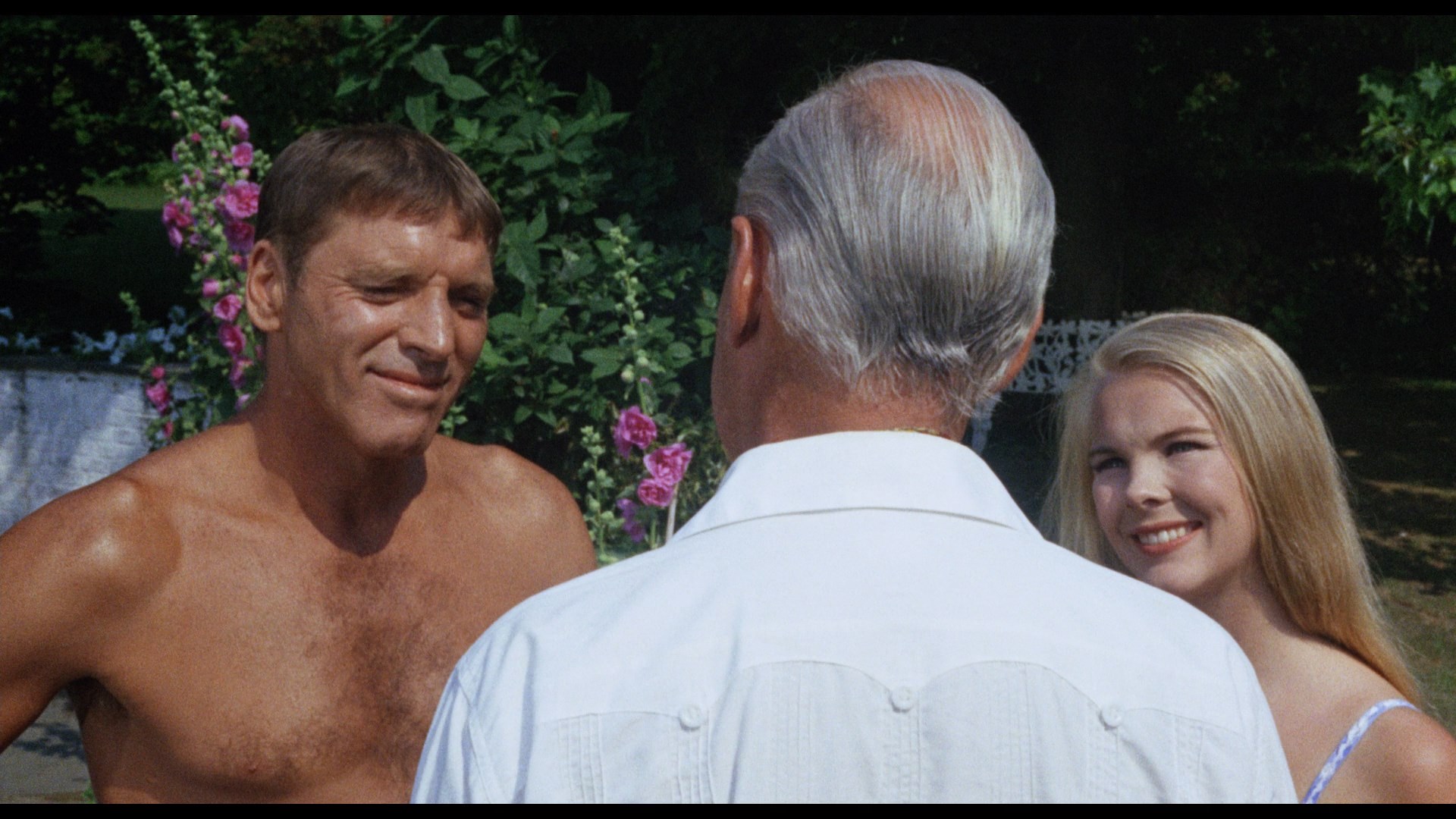 As usual for Grindhouse, the release comes packed with extras. The biggest by far is the mammoth documentary The Story of The Swimmer by Chris Innis, who won an Oscar for co-editing The Hurt Locker with her husband, Grindhouse's Bob Murawski. Pretty much every living participant is included here: Michael Hertzberg (first assistant director), Ted Zachary (second assistant director), Joanna Lancaster (Burt's daughter), actresses Janet Landgard, Marge Champion, and Joan Rivers, Bob Horn (Lancaster's swim coach, who had his work cut out for him considering the actor didn't know how to swim), editor Sidney Katz, and Hamlisch. The piece is divided into five sections (with end credits for each) covering the entire production from inception to release, and not surprisingly, the behind-the-scenes drama and stories of Lancaster's physical preparation for the role (not to mention some fashion choices like one memorable bikini) are the standouts in a fascinating Hollywood story, which also includes some fun name dropping for people like Paul Newman.

A TCM Film Festival interview from 2013 is a nice addition as well, clocking in just under 18 minutes with Marge Champion (still spry at 94 years old) interviewed by director Allison Anders. The focus is on The Swimmer at first, but other topics are covered as well including her role in Showboat (and the one showbiz venue she never explored, burlesque!). There's also a 25-minute audio reading of the short story by Cheever himself (who has a fleeting cameo in the film), a massive set of galleries (Frank Perry's storyboards, two sets of production stills, shots of Landgard, a look at the deleted scenes filmed with Barbara Loden before she was replaced by Janice Rule, U.S. and international marketing materials, and a DVD-Rom pdf of the screenplay. The American theatrical trailer is included ("The drama of a man suddenly plunged off the deep end of life!") along with five TV spots. Also included are filmographies for Frank and Eleanor Perry and Janet Landgard, plus a liner notes booklet with an appraisal by director Stuart Gordon and a handy, very articulate essay by Innis about the film's turbulent history. Dive in!

Buy from Diabolik
Buy from Amazon