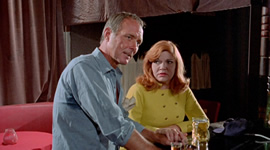 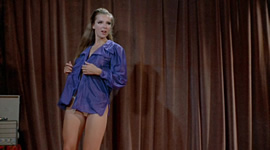 Before he created one of the most memorable bloodsucker films of the decade with 1972's Grave of the Vampire, director John Hayes was already a seasoned exploitation vet with plenty of experience in delivering sex and violence with an eccentric twist. For example, his nutty Nazi outing The Cut-throats (released on DVD by Vinegar Syndrome) used its impoverished budget to push the sleaze factor as far as an American film could go in 1969. The following year he flummoxed audiences with no less than five films: Dream No Evil, the wacko softcore offerings Fandango and All the Lovin' Kinfolk, and the double feature we have here, a pair of portraits of vice and debauchery at the end of the free love era.

Boasting the better title and the lesser sleaze value of the pair is Sweet Trash, which opens with loan shark Dan Carlisle (Connors) smacking the daylights out of his moll and setting up a high stakes card game at his strip club. He offers a chance to win six thousand dollars to his poor sap schoolmate, Mike Donovan (McLeod, best known as lecherous lawyer Porter Hall in Beyond the Valley of the Dolls), a longshoreman who's more motivated to stay drunk than dig himself out of hock. Of course he blows the chance and ends up getting threatened by a variety of goons who want to break or chop off his fingers. Along the way he wanders in and out of bars and strip clubs (with topless women dotting the background every couple of minutes) while lilting Irtish music plays. Eventually Mike smashes a bottle across two muscle men and hightails it on a train to Coney Island (which provides some great vintage location footage), where he has colorful nocturnal meetings with a pitiful blonde prostitute and a Puerto Rican female wino, leading to a booze-induced freak out, some naked blondes jabbing at each other with stilettos, and the only positive presence, lifelong friend Helen (McGee), who's been nursing a crush on him 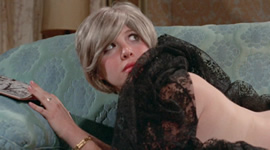 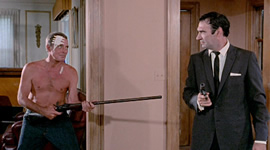 For much of its running time, this feels like Hayes trying to do a gritty New York spin on Eugene O'Neill with a soused hero chatting away with a variety of lowlifes. However, the film starts to take some truly crackpot turns in its second half, especially a sci-fi twist involving an omniscient computer that swerves everything into "head" territory at the last minute. There's no doubt the filmmakers were aiming for something way above the usual 42nd street fare here with McLeod in particular giving a committed, impressive performance, though what the meandering boozing and chatter is supposed to really represent is anyone's guess. Frequent TV actor and future hardcore porn director Peter Balachoff (later Balakoff) even turns up as Dan's boss, a murderous, demanding sleazeball whose fate is the most ironic of the entire film.

In The Hang Up, middle-aged vice squad cop Robert Walsh (Gregory) has been reduced to dressing up in drag (complete with a terrifying red wig) to frequent local bars and break up all that nasty corruption. The debauchery here is appalling, complete with a peroxide blonde in a men's suit doing a floor show with another woman in a negligé who strips to her skivvies and rubs her silicone implants. Appalling! As it turns out, his latest drag assignment involves catching phony cops blackmailing gay clients, which climaxes with Robert punching out and head butting one of the perps until his wig goes flying across the room. However, Walsh is disgusted by his surroundings as he vents his distaste for hookers, homosexuals, and child molesters, the targets of his trade. His home life is a depressing shambles, living in a shabby apartment where he sits around shirtless sipping on Coors and having terrible sex on the bathroom floor with his landlady. However, he soon becomes fixated on Angel (Matt), a 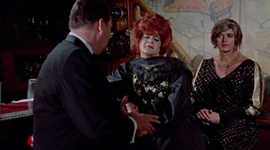 young lady from Salinas employed by the local massage parlor / brothel, who claims she's only been in this racket for a week. He slips Angel out of the place before a raid and takes her under his wing, with the establishment's face-painted 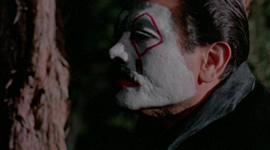 master of ceremonies (Balachoff again) watching the whole thing from afar. He soon chastises her for taking the trash out in her her slip, but she calls him a puritan and argues, "I have a good shape and I like showing it!" Who can argue? Their attempts to play house thaw out when she reveals her actual name, Laurie, and pacifies him by soaping him up in the shower. The relationship softens up his violent streak at work, much to the chagrin of his partner, and he even starts hanging out with Angel's friends who enjoy regular afternoon activities like topless horseback riding. As it turns out, the girl's hiding a sordid secret that could take Bob down for good, which leads to a third act you'll never believe involving a bevy of scantily-clad models parading around a dirt road, jazz music, blackmail, a tragic car chase, and one of the tackiest lines in exploitation history, "I'll rape you good!"

Unlike the first film, this one slams on the gas right out of the gate and barely stops for a second as it delivers the seedy goods. Hopefully we aren't meant to find any of the characters sympathetic, but in this case it doesn't really matter as things start off at a ludicrous fever pitch and keep barreling on through an amped-up mixture of film noir and deranged skin flick. Gregory (who apparently went on to direct the trashy 1982 thriller Victims under his real name, Tony Vorno) was a 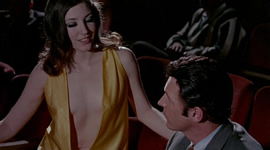 regular member of the Hayes stable since Help Wanted Female and does a good job of showing off his character's hot-tempered side, with a couple of violent outbursts that send the handheld camera careening. Matt (who had just appeared in H.G. Lewis's Linda and Abilene and The Ecstasies of Women) is no great shakes as an actress, but fortunately the plot has enough leeway to allow her stilted, often unconvincing delivery to work as part of the character. Fun stuff and never dull. 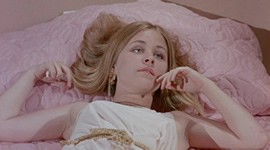 Essentially thrown away upon its initial release, Sweet Trash makes its home video debut here alongside a much-needed upgrade for The Hang Up, which was previously out as a splicey, faded VHS and DVD-R from Something Weird. Both look excellent here with rich colors and very little damage, save for some debris during scenes involving opticals like the credit sequences. The widescreen framing appears to be accurate, and tech specs across the board are up to Vinegar Syndrome's usual standards. The sole extras are the theatrical trailers for both films, and the one for Sweet Trash alone is almost worth the retail price by itself as a female narrator keeps repeating the title with mounting levels of feverish excitement. Be warned that both of the trailers are absolutely crammed with major spoilers, so don't watch 'em until after the main features.