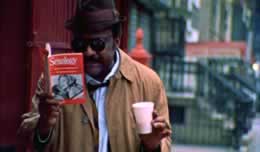 Made during the height of the '70s blaxploitation craze, Super Spook can easily lay claim as the first spoof of the genre way before I'm Gonna Git You Sucka, Undercover Brother, and Black Dynamite took belated stabs at the world of Shaft and Foxy Brown. Unfortunately, that's easily the biggest thing the film has going for it. Shot on 16mm in a little over a week without a script, this rambling goof of a film stars Ganja and Hess' Leonard Jackson as the titular Super Spook, a slovenly private eye who seems to constantly get into fist fights out on the street. (Of course, these fight scenes are performed by the actors very, very slowly since the filmmakers couldn't afford to do real slow motion, which gets the biggest laughs in the film.) Super Spook's latest target is the villain who's out fleecing bag ladies, and another private dick, Hi-Yo (Jay), is on his trail when the policeman in charge, Sergeant Sandwich (King), isn't up to the job. Along the way you get a sex scene on a plastic-covered couch, a colorful musical number shot in Woodstock-style split screens, and a nutty street preacher (Reed) in a wheelbarrow. 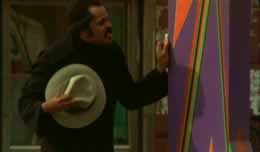 People who gripe about the many technical shortcomings in Dolemite will have a coronary with this one. The camera never seems to find a well-framed shot, the actors ramble on for minutes on end about nothing in particular, and there's never anything resembling a coherent storyline. On the positive side, this was actually shot on the streets of Harlem and provides an amazing snapshot of the area circa '75, while the actors bring a lot of gusto to their roles even when the material leaves them flailing. Scorpion's DVD touts this as the never-released director's cut, containing two minutes of footage cut from release prints. It's impossible to pinpoint where the extra footage lies given the fact that you could easily hack 45 minutes out without anyone noticing, but for what it's worth, this is some sort of restoration. The image quality is about as good as you can get for a cheap, poorly shot film taken from a blown-up 35mm print; no real complaints here given the film's history, and the mono audio sounds fine. 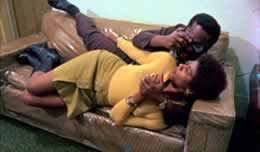 Better than the feature itself are the many extras, particularly a great video interview with Tony King, an Atlanta-based actor who also appeared in Shaft, Hell Up in Harlem, and Bucktown. However, this featurette focuses entirely on his unlikely career as a short-lived Italian exploitation star after he wound up getting hired on to appear in Cannibal Apocalypse (which was shot in Atlanta) and went on to appear in The Last Hunter, Raiders of Atlantis, and Tiger Joe. He talks about working with Antonio Margheriti and John Saxon, among others, and offers a different, somewhat bemused perspective on this strange career detour. You also get an early short film from director Anthony Major called "Off Duty" (a silly B&W sketch about a black man going to extreme measures to hail a cab), and a 53-minute(!) making-of featurette, "Looking Back," in which Major, King, actor Randy Harris, producer Ed Dessisso, and editor Sandy Tung chat about the "make it up as we go along" project which was intended to capitalize on the seemingly endless demand for black action fare; the same participants also elaborate a bit more in an audio commentary which also explains the non-permit shooting and some of the tacky stories behind the locations and furniture, some of which are quite unforgettable. Definitely an example of an underwhelming film still recommended on the strength of its supplements alone.