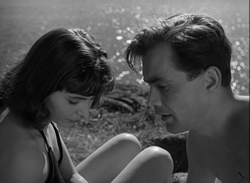 You'll probably never find a more unlikely collision between the art house and the grindhouse than the situation involving Summer with Monika, a coming-of-age story from Ingmar Bergman shortly before his streak of masterpieces in the mid-1950s. Of course, he wasn't the international name at the time he would soon become with films like Smiles of a Summer Night and The Seventh Seal, so when the film was snapped up for American distribution, its then-daring flashes of skin were enough for Hallmark Productions and legendary exploitation pioneer (and former carny showman) Kroger Babb (Mom and Dad) retitled it Monika, the Story of a Bad Girl, complete with a few extra nudie shots. ("You'll flip! Men wilt under the touch of her lips!") The ploy worked, and it became a much-seen sexy Swedish import.

Of course, the film itself is much more serious and sensitive than audiences probably expected. The simple plot follows the romance that grows between 19-year-old kitchenware employee Harry (The Magician's Ekborg) and student Monika (Dogville's Andersson), two years his junior, whom he meets at a pub. They fall in l 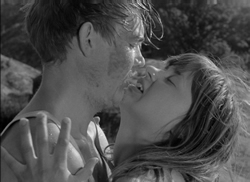 ove and, when she leaves her stifling family home, he likewise quits his job to run off with her on his father's boat to spend the summer on a nearby island. However, when Monika gets pregnant and her ex shows up, their idyllic life seems destined to end.

A lovely little bittersweet character study, Summer with Monika finds its greatest strength in the relationship between the two main characters, a conformist boy and a more rebellious young girl; rather than telling a straightforward love story, it pays as much attention if not even more to the impact the demands of real life can have on what movies normally portray as a romantic ideal. A far cry from the more ambitious scenarios shortly to come with Sawdust and Tinsel and Smiles of a Summer Night, the film was conceived and shot very quickly; however, its use of landscape as an 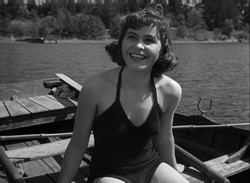 extension of and counterpoint to its characters is pure Bergman, and the wonderfully realized little human touches throughout still make it a little gem worth discovering.

Very hard to find on video in America but available on DVD in the UK from Tartan in a reasonably good edition for years, Summer with Monika finally got the Criterion treatment with both Blu-Ray and DVD editions; go with the former if you can -- it's really something. The transfer is up to the high standards of their previous Bergman releases, which means it's very clean, natural, sharp, and satisfying all around; the densely textured shots of the island now make much of an impression than its SD predecessors could provide, by a long shot. Audio is presented in Swedish with optional English subtitles, and a four-minute Bergman intro recorded in 2003 finds him recalling the film with a great deal of affection. Other extras include a 25-minute video interview recorded for the Criterion release with Andersson and Bergman scholar Peter Cowie, which covers her involvement with Bergman at the time, her numerous roles for him, and the state of both of their early careers at the time. The fascinating "Monika Exploited" with Eric Shaefer covers the film's bizarre American release mentioned above (including its recutting and the addition of Les Baxter jazz music!), while the 30-minute "Images from the Playground" by Stig Björkman mixes audio and video interviews, behind-the-scenes foot 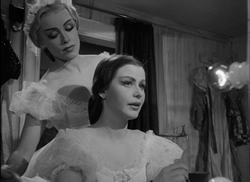 age, and other vault ephemera into a snapshot of the creation of the film. Along with the trailer, the release also includes a liner notes booklet with an essay by Laura Hubner, a 1958 review by Jean-Luc Godard ("it is to the cinema today what Birth of a Nation is to the classical cinema"), and a bizarre, hilarious print interview with Bergman interviewing himself before the film's release. 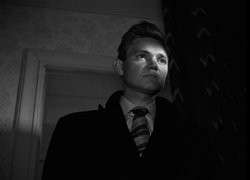 Two years before Summer with Monika, Bergman had already directed another significant film with a related title, Summer Interlude, also released by Criterion at the same time in a much more modest edition. The transfer is likewise excellent, in as close to pristine condition as possible for a film of its vintage. The visual scheme is very different here, obviously, as the lighting schemes are softer and less naturalistic, but the detail on display is impressive, making this a fitting presentation of a film previously underseen in English-language territories.

While sitting in her dressing room before a big final rehearsal for a production of Swan Lake, troubled prima ballerina Marie (Nilsson, star of Bergman's earlier To Joy) receives a diary in the mail. It was written by her first lover from a few years before, Henrik (Masculin Feminin's Malmsten), and she decides to retreat to the countryside away from her current boyfriend (Kjellin) after a technical glitch puts the rehearsal on hold. There she remembers the events and experiences them through her beloved's eyes in flashbacks, showing how she went from an optimistic young lover to a more jaded, wounded soul in the present.

Beautifully shot and performed, this film has often been overlooked in the Bergman filmography; however, it contains many visual and dramatic motifs which would be expounded upon in his later films, ranging from the theatrical setting (which got a far more extreme workout in later projects like Fanny and Alexander and his bizarre The Rite) and the reflective look at life and love from an aged perspective, which of course informs Wild Strawberries and could be seen as a trial run for some of Scenes from a Marriage.

Though the film is presitigous enough to warrant more than inclusion in an Eclipse box set, the only extra in this case is liner notes by Cowie, who covers the young Bergman's position as a director at the time, the location scouting, and the stories behind the leading performers.