Though few will probably qualify it as a pleasurable viewing experience, Double Suicide (Shinju Ten no Amijima) is a technically startling, compelling aesthetic experience. The title itself gives away the finale, so the tragic inevitability of the story keeps the viewer at an emotional distance while experimental director Masahiro Shinoda toys with the cinematic possibilities of filming a bunraku (Japanese puppet play). This art form allows the puppets to be manipulated by kurago (puppeteers dressed entirely in black), a convention kept to unsettling effect within the film itself. 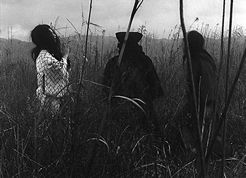 After a prologue in which the play is established and the director establishes over a phone how he wants the proceedings conducted, human actors take over to tell the story of Jihei (Kichiemon Nakamura), an established and respected paper mill baron whose contended family with a wife (Shima Iwashita, the director's wife) and children is disrupted when he begins an affair with Koharu (also Iwashita), a prostitute. For months he vows to buy her freedom but finds himself unable to do so, while his father-in-law demands an immediate divorce and the removal of his children. Rejected by society, the two lovers flee together to continue their love, but Jihei realizes their only solution to their problem lies in the afterworld. Koharu proves reluctant to take her own life, but the powers of fate cannot be denied. 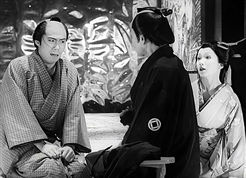 Based on a 1720 play by the renowned Monzaemon Chikamatsu entitled Double Suicide at Amijima, this disturbing film manages to be wrenching and curiously hypnotic at the same time. The stark black and white photography provides a subtle interplay of visual surfaces and the contrasts of fabrics and backdrops, while the frame often splits into beautifully composed juxtapositions of diagonal, vertical, and horizontal planes, a technique carried to its natural conclusion during the violent finale which finds the lovers' bodies splayed against each other. Special note should also go to the minimalist score by Toru Takemitsu, a far cry from his more familiar work for Kurosawa.

Criterion's DVD has been mastered from the same full frame source used for their previous laserdisc and tape editions, though it looks slightly crisper and features more robust contrast. The optional English subtitles are identical and remain easy to read throughout. Some minor grain is evident during some of the stronger white areas onscreen, but this has existed in all previous transfers, too. The disc's only extra consists of a thoughtful 1970 printed essay by feminist critic Claire Johnston which accompanied the film's surprising U.S. theatrical art house release.