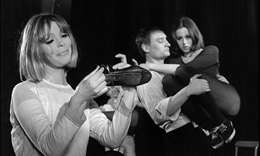 Before she broke through as a familiar face from Andy Warhol's Factory era in the film Chelsea Girls and the immortal chanteuse from the classic album Velvet Underground & Nico in the late '60s, German-born Nico was a rising model jetting back and forth between America and Paris. During this period she made several film appearances (including La Dolce Vita) but only starred in one: Strip-tease, a frequently overlooked "naughty" art film made in the aftermath of Brigitte Bardot's taboo-breaking skin scenes. Though released in America as Sweet Skin two years later, it inexplicably fell between the cracks and dodged most of the home video era for reasons never really explained. Fortunately, it also turns out to be quite a worthwhile film. 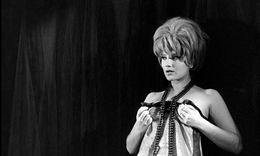 Aspiring ballet dancer Ariane (Nico) decides to accompany some friends to a local club where, according to them, the manager and performers have managed to transform stripping "into an art form." She becomes captivated by this new form of performance art and is drawn in to the environment, where she eventually makes her aborted debut onstage doing a surreal strip act with a marionette calling the shots by using a puppet to demonstrate. She also gets to hang out with American musician Big Joe Turner ("Shake Rattle and Roll") and becomes romantically involved with a shallow but handsome young member of high society, Jean-Loup (Perversion Story's Sobieski, father of Leelee). Will the lure of the glitzy striptease scene continue to draw her in, or will she be able to turn the increasing acclaim for her performances into a new course for her life?

Surprisingly moody considering the potentially salacious subject matter, Strip-tease is often strikingly photographed in glossy black and white and features an early score by French pop legend Serge Gainsbourg, who went on to scandalize Europe with a string of catchy hit songs. His theme song here is a catchy little ditty, though the version in the actual film is different from the one originally recorded with Nico herself (which is available on the excellent Le cinema de Serge Gainsbourg box set). The filmmakers wisely make Nico's character a foreigner, which explains the halting and oddly accented French she exhibits in the film, but she's so stunning to look at that most 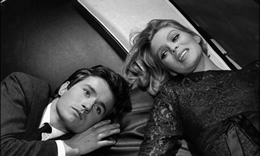 viewers probably won't notice. On a more lowbrow note, the film also delivers a pretty incredible amount of nudity for 1962; most of the stage performers get down to little more than a merkin, and even Nico herself has a brief topless scene that should have celebrity skin watchers reaching for the pause button.

Mondo Macabro's DVD release, the first official one for this film, is a fresh transfer from the negative apparently held by Gaumont, judging by the opening logo. Some very light moisture damage is evident especially on the left side on and off throughout the film, but it's a minor quibble given the overall sterling quality of the presentation; detail is excellent, and the delicate contrasts of the club scenes appear to be accurately maintained. Only the original French audio is present; if there was ever an English dub, it's probably long gone by now. Extras include the usual terrific Mondo Macabro text rundowns about the film (including notes about its mondo-style origins), profiles of the major cast and crew, and a history of stripteases on film. Also included is an interesting video interview with a friend from Nico's days living in London, Richard Witts, who talks about the speaking style, intelligence, and social mannerisms of this ill-fated pop culture icon (as well as her controversial claims that her child was fathered by Alain Delon), while one of her fellow German musicians, Lutz Ulbrich, talks about meeting her and sparking an affair as well as the genesis of her often ignored but fascinating solo experimental album releases. A fascinating cinematic artifact that also happens to still be very rewarding on its own terms, this is a must for anyone with a taste for sleek '60s-era French saucy cinema.