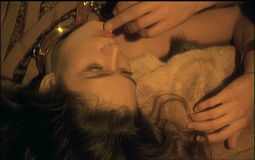 Just Jaeckin's previous moneymaker, Emmanuelle. O (Clery), a beautiful young fashion photographer, is escorted by her lover, Rene (Kier), to the gothic Chateau Roissy where she endures a succession of humiliations and erotic experiments designed to test her physical and emotional limitations. Desiring only to please Rene, she willingly submits to each new demand without question. Back in Paris, O resumes her romantic relationship with Rene, who strangely hands her over into the care of the older Sir Stephen (Steel). A primary member of the Roissy coterie, he performs a serious of mind games with O, who begins to feel unease about her status as a pawn in what appears to be a world of scheming men, focused on their own pleasure solely at her expense. 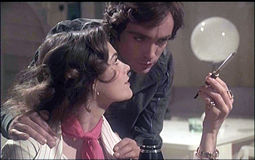 A regular video favourite since the early '80s, Story of O enjoyed numerous VHS incarnations but only two laserdisc releases, one from MGM in the US (a cropped but colourful transfer which stupidly omits Bachelet's main title theme) and one in Japan (also full frame, in French with Japanese subtitles). The original French cut of the film (also issued on VHS in Australia, of all places) runs about 10 minutes longer, consisting mainly of a scene in which Rene calls O from work to tell her to disrobe and remain naked until he comes home (which she does) and a sequence with O and her model protege, Jacqueline, walking near the beach and having a jealous tiff over one of O's female conquests. The Japanese version was subsequently issued on DVD (again, no English subtitles), while the English print first received the DVD treatment in Hong Kong from Heatwave, an adult video label with an outrageously smutty promo opener on 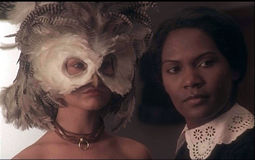 their discs. The image is completely unmatted, exposing a filmed hard matte slightly under 1.66:1 for most of the film but full frame during certain shots. The sound quality is acceptable, though some slight warbling can be heard during the opening credits. For some reason, the back of the packaging only includes promo shots from the vastly inferior Story of O 2, a British-French coproduction which avoided almost everything that made the original work. An Australian release from Force is comparable in terms of both content and quality. The British disc from Arrow features a nice but mildly battered 16:9 transfer of the standard English cut, with the additional scenes tacked on as a supplement (with no audio!). More respectable is the French DVD, which offers a sparkling transfer of the English language edition with optional French, Spanish, or English subtitles, or the longer French cut with the same subtitle options, as well as the stylish European trailer and a host of extras relating to softcore French erotica. The latest release out of the gate came from the U.S. courtesy of Ventura, whose disc largely repackages the contents of the French disc but with a few variables worth mentioning. The 1.66:1 transfers of the English and French cuts look comparable to the PAL French disc, with the French taking the slight edge in terms of clarity and condition of film elements. The disc also carries over the trailer, drops the unrelated erotica ephemera, and adds on a Just Jaeckin commentary; he speaks in French with no subtitles over the French cut, while an English voice translator speaks over the English cut. Apart from using the word "fantasy" about 300 times, he sets the record straight about the novel's origins, discusses the roles of various people behind the camera, and offers his own views about the story's meaning. However, he only talks for 22 minutes, so don't settle in for a lengthy listening experience. For some reason the French track doesn't feature a subtitle option (you can only access it from the main menu by selecting "Francais"); the scene descriptions above should be enough to guide viewers to the extra footage.

During the late '70s and early '80s, countless filmmakers scrambled to cash in on the controversial firestorm ignited by director Just Jaeckin's Story of O, a stylish and popular S&M epic based on the scandalous novel by "Pauline Réage." Hardcore and softcore imitations abounded, with one mediocre legitimate sequel, Story of O Part 2, rearing its head in 1984. A few years earlier, however, another sequel of sorts appeared with Fruits of Passion, based very loosely on Réage's follow up novel, Return to Roissy. This kinky, surreal film was produced by Anatole Dauman, the soul also responsible for Nagisa Oshima's blend of art house pretension and hardcore sex, In the Realm of the Senses. The combination is even more delirious here as the film chucks aside conventional narrative, instead contenting itself with any bizarre path the actors feel like following. Shortly following the events of the original story, the naive, beautiful and submissive O (Isabelle Illiers) accompanies her master and lover, Sir Stephen (Klaus Kinski), to 1920s Hong Kong where he enlists her to work in the House of Flowers, the most demanding brothel in town. The creepy Madame (played by cross-dressing actor Peter, also in Akira Kurosawa's Ran and the fifth Guinea Pig film) explains that refusing any client's demands will result in starvation, gang rape, or torture on a wheel. The despairing O submits to her fate and keeps a picture of Sir Stephen on her wall to sustain her through the ordeal. Meanwhile Sir Stephen makes deals with revolutionaries while dallying with local prostitutes and a scheming French blonde (Pauline at the Beach's Arielle Dombasle) who urges him to leave O for good. The other women at the House of Flowers include a failed actress who constantly hears a piano playing underwater and participates in amateur porn films. O fails to establish a connection with the other women but does her job, observed often from the street below by a young man hoping one day to hire her services. Naturally, it all ends quite bizarrely and tragically.

Rarely seen outside of its initial theatrical run, Fruits of Passion bounced from one video label to another in a horribly butchered, 74 minute edition which featured dreary image quality and few aspects of interest. Anchor Bay's DVD makes for an eye opening revelation; not only is it beautiful to behold and now far more significant as an aesthetic achievement, but this print contains eight minutes of extremely graphic, often hardcore footage. Not really lingering or exploitative, the added scenes are all the more jolting for their unexpected integration into the story, with even Klaus himself participating in a few scenes of blatantly unsimulated coupling. Since this marks Anchor Bay's first hardcore title, one can only wonder how much it will impact any of their future title choices. The direction by poet Shuji Terayama (who died shortly after this film's completion) features a number of startling touches, with a particular and haunting emphasis on water (the submerged piano, a floating doll, the climactic door-bursting). The music score by "J.A. Seazer" is likewise a beautiful achievement, delicate and haunting with a memorable main theme. The film isn't perfect, with Illiers in particular given little to do besides mope around naked and occasionally suffer the abuse of her clients. Compared to the original O, Corinne Clery, she simply fades off into the woodwork. Otherwise, this compares favorably to the original and now earns its place as one of the best films from the final days of classy erotica. The DVD also includes a graceful, striking animated menu design and two language options-- one completely dubbed (poorly) into English, the other retaining the Tower of Babel audio mix of English, French, Cantonese, and Japanese with most of the actors' original voices. Only the latter really works in the context of the film, which thrives on intercultural confusion.