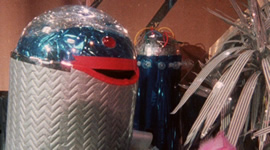 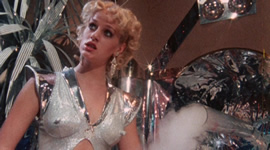 Definitely not your average sci-fi sex spoof, this wild anthology manages to throw in affectionate nods to gothic horror and cheerleader comedies. Very low budget but definitely high on enthusiasm, this was the penultimate adult film directed by Howard Ziehm (credited as "Linus Gator"), who'd scored a decent hit with Flesh Gordon and made a return here to sci-fi sex comedy territory under very different circumstances.

"At the end of time on a planet in a distant galaxy," mankind has completely wiped itself out -- except for a single "girl child" preserved by an "all-powerful race of thinking machines." What this means is that a platinum-blonde, mentally vacant vixen (Hustler centerfold Klark) gets pulled out of a protoplasmic duplicator by a housekeeping robot with a British accent. Our full-grown, barely clad test tube baby doesn't understand the concept of sex, so the robot goes into its faulty memory banks to explain it all. Thus we start an anthology of four stories, kicking off with a nutty retelling of the story of the Garden of Eden set at a '50s high school where Adam (Wise) and Eve (Louise) decide to "go parking." Their idyll is interrupted by a stogie-chomping serpent (Phillips), who urges them to taste a forbidden pineapple so they can get busy for his amusement. Then we get a B&W silent Rocky Horror pastiche as innocent travelers Prissy and Percy (Anderson and Bloom) end up at a spooky castle on a dark stormy night. Count Dracula (Harden) and his assistant (someone credited as "Tricky Dicky" wearing a Richard Nixon mask) take advantage of Prissy on the dining room table. Then we have a couple of frisky cheerleaders (Summers and Dolan) using every means at their disposal in the locker room to revive an injured star quarterback (Ranger), and finally a strip club orgy erupts after a performer does an erotic dance with a 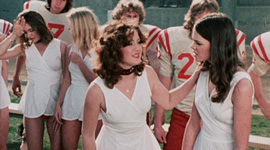 snake and a cigarette, which works up seven guys (including Ranger and Wise again) to indulge in two other female staffers back in the dressing room. 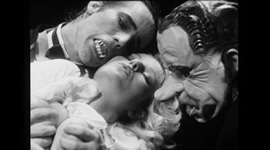 Initially released on VHS and DVD by VCX in a really drab transfer, this endearing oddity fares much better courtesy of a new HD transfer from Vinegar Syndrome from a fairly solid 35mm print. Minor damage is often evident but the overall appearance looks quite nice, albeit not up to the spectacular standards found in their Peekarama series. The intentionally ratty special effects look even more amusing than before, and the gaudy colors are a sight to behold. Interestingly, one aspect lost entirely on past video editions is the aspect ratio switch to 1.33:1 for the vampire sequence; perhaps Ziehm was psychic since the makers of Rocky Horror actually intended the opening act of their film to be monochrome and Academy ratio as well but were stopped by the studio. (An alternate version on the home video releases partially adjusts this.)

There's only one extra on the disc, but it's a good one as Vinegar Syndrome's Joe Rubin sits down with Ziehm for a candid commentary about the film and the state of the business at the time. Ziehm's much more animated here than in his Flesh Gordon commentary (which he was presumably reading off of note cards) as he chats about hiring Klark on the recommendation of Suze Randall, the negative influence of mob involvement in adult filmmaking, the one planned act Anderson couldn't perform during her scene, and the use of a stunt performer for part of Klark's big finale. He also reveals the identity of the pug-nosed Hollywood character actor hiding behind that Nixon mask, which is a little surprising. They definitely don't make 'em like this anymore.