Italian horror films were going through a bumpy transition throughout the 1980s, with the durable giallo 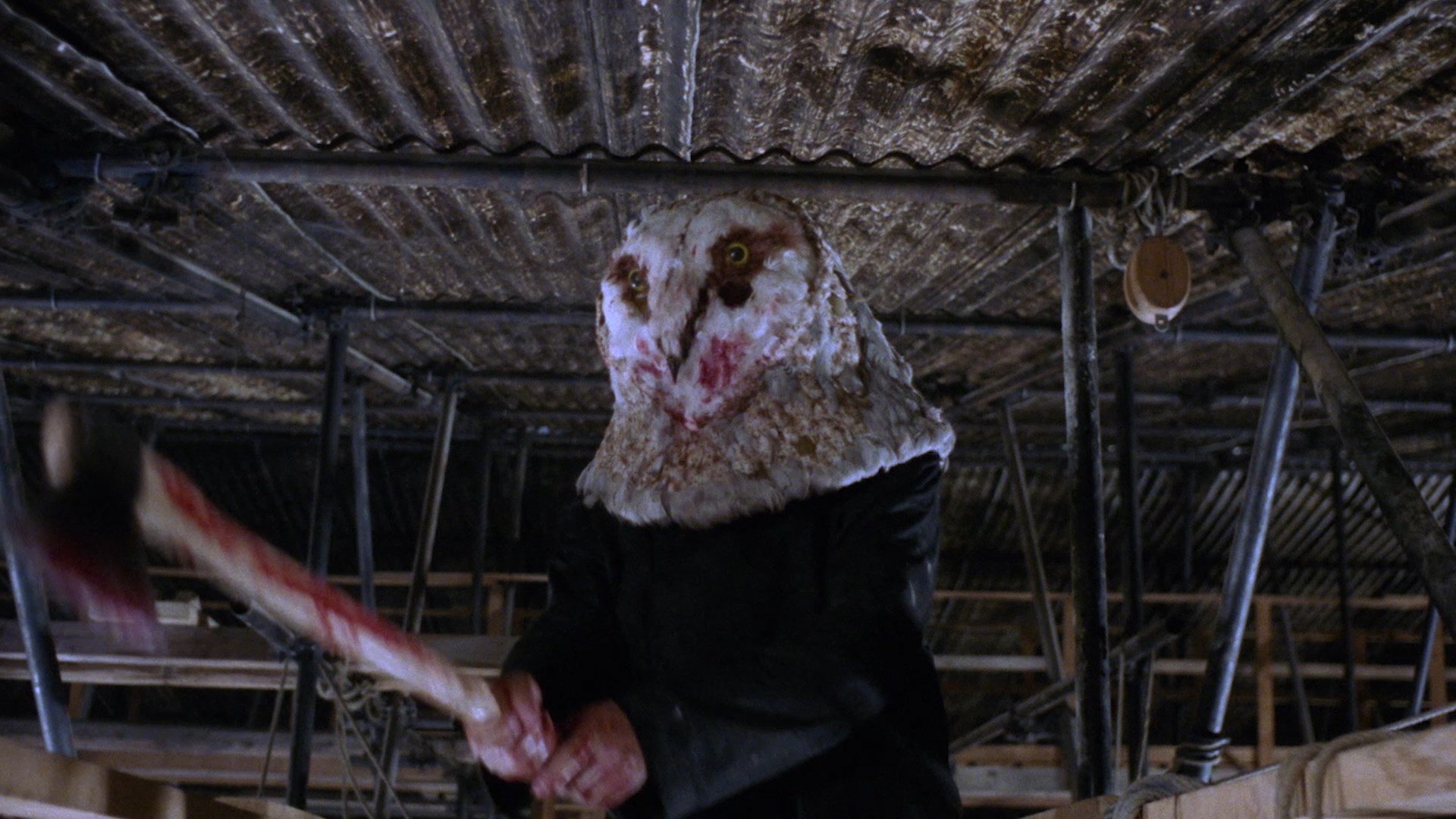 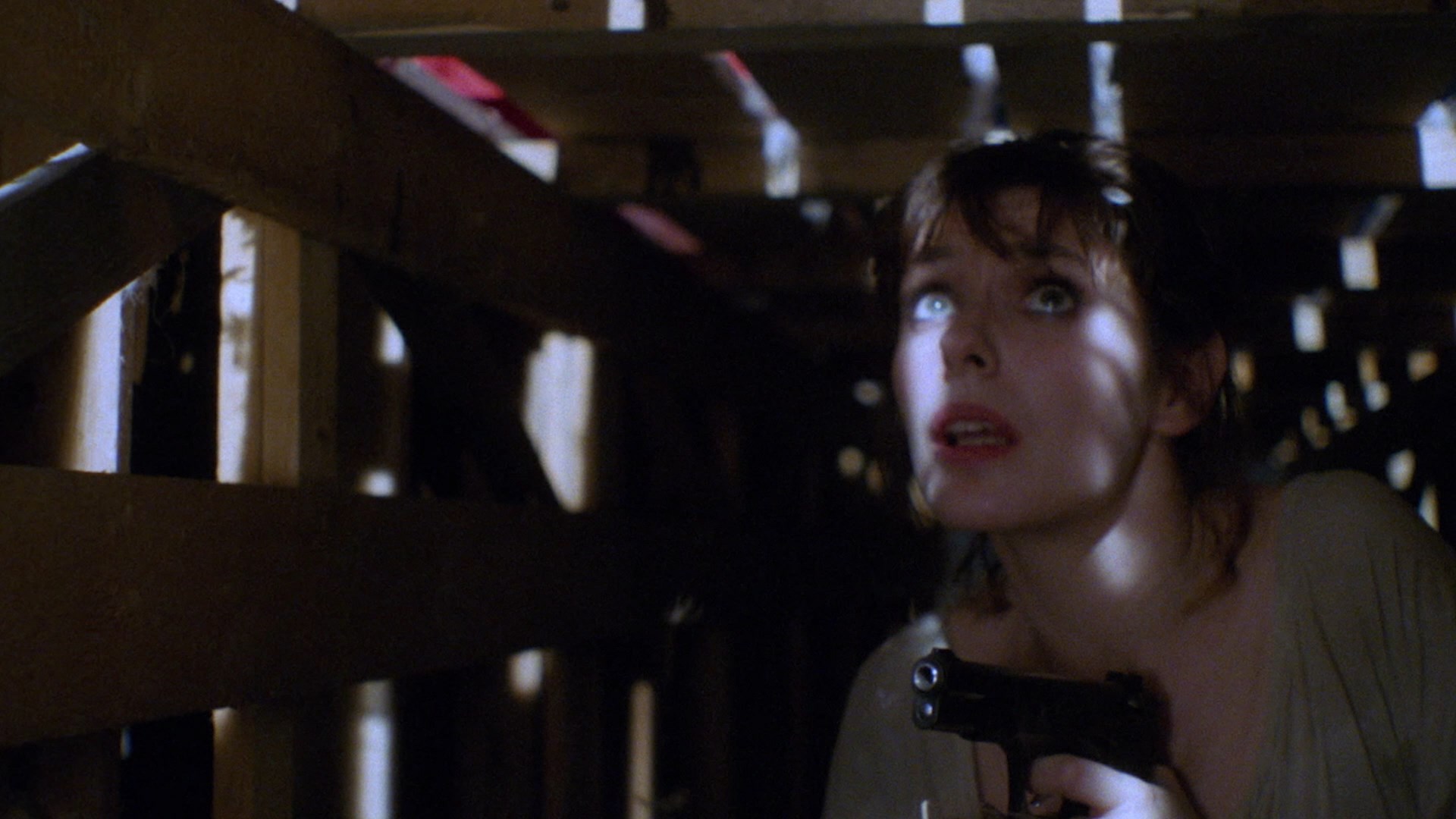 transforming into outrageous, slasher-inspired extravaganzas under the guidance of second-generation maestros like Dario Argento and Lamberto Bava. Offering the genre an unexpected shot in the arm was a low-budget offering seemingly borne out of nowhere: StageFright, also released as Deliria and Aquarius. The film marked the directorial debut of Michele Soavi, an actor who started cutting his teeth behind the camera working as an assistant director on Tenebrae, Demons, and even The Adventures of Baron Munchausen. With this film he proved that he had not only absorbed some of his mentors' best tricks but had more than a few stunning new flourishes of own, delivering a wildly entertaining, stylish rollercoaster of a film that still packs a punch today.

A cavernous theater at night is the setting for the rehearsals of The Night Owl, a macabre pop musical directed by the opportunistic, craven Peter (Brandon). When leading lady Alicia (Cupisti, Soavi's real-life girlfriend at the time) injures her ankle, she's taken to a nearby clinic that turns out to be an institution for the criminally insane. After a bit of bandaging, it's time to head back to the theater -- with an extra passenger in tow, an escaped patient and notorious actor/serial killer named Irving Wallace who quickly dispatches the wardrobe mistress outside the theater. Peter seizes the opportunity to lock the entire cast and crew in for a marathon overnight rehearsal 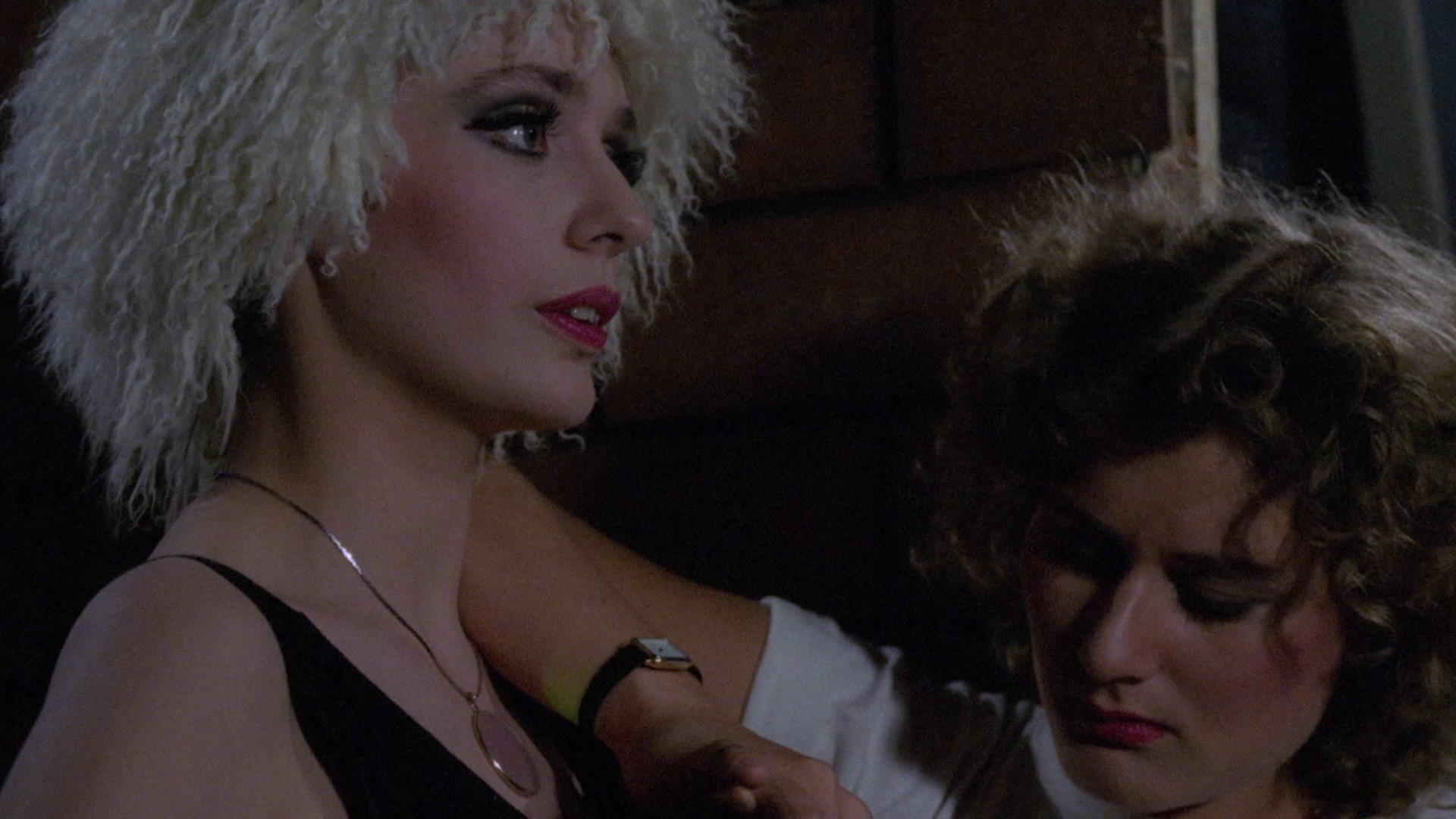 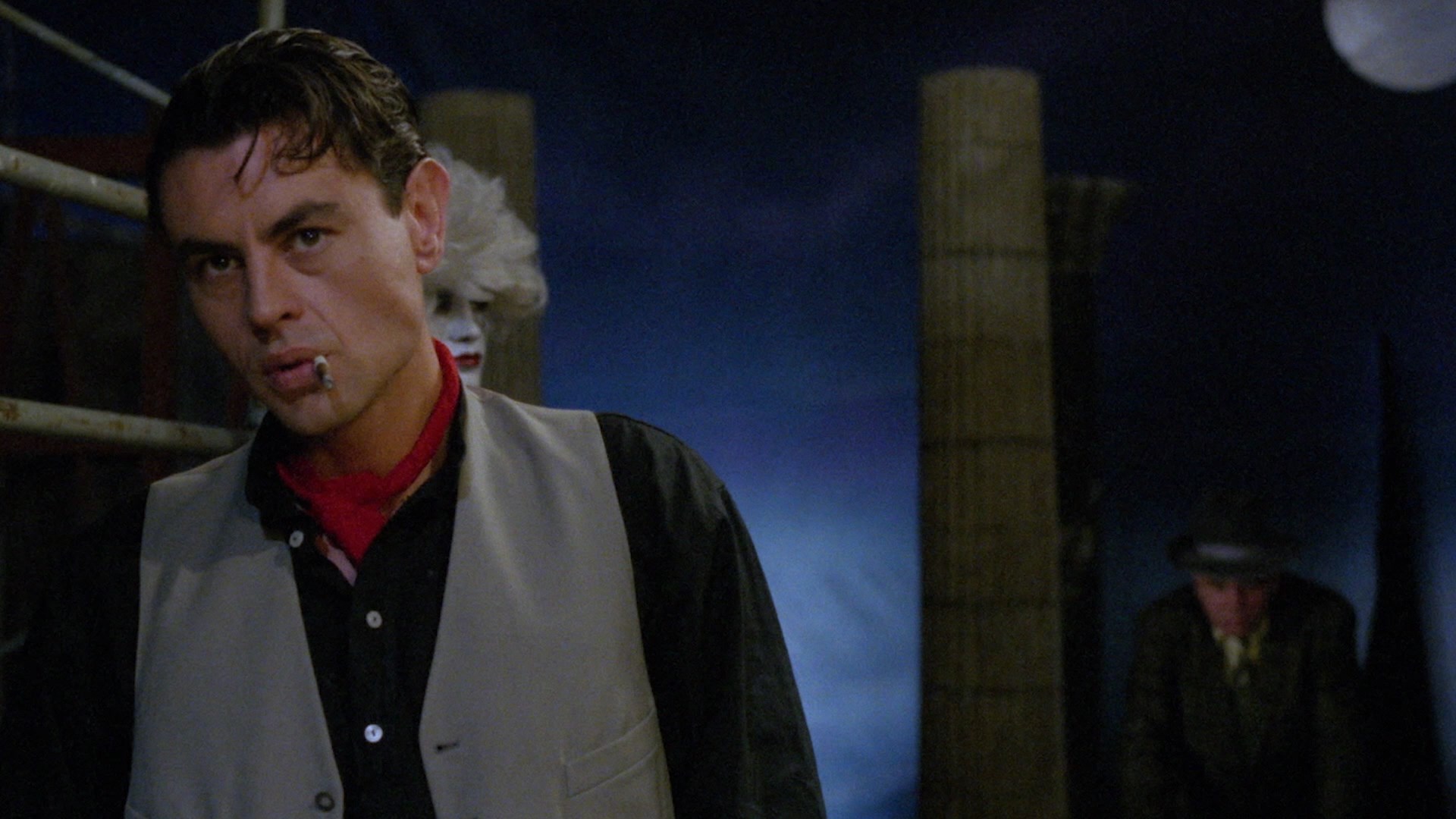 capitalize on the crime and turn the play's nameless killer into Wallace himself. Of course, the madman is already inside with them, and,sporting the eerie owl mask from the play, he stabs one actress to death on stage in front of the stunned onlookers. With the sole key to their escape hidden away, they fight to survive as Wallace turns to a number of power tools and other vicious implements to pick them off one by one.

Far more than your average hack 'n' slash film, StageFright is loaded with fantastically bitchy dialogue including some choice nuggets for Brandon (who starred opposite Soavi as the title character in Caligula: The Untold Story, too) and reliable genre vet John Morghen, a.k.a. Giovanni Lombardo Radice, already well known for Cannibal Ferox. All of the murder set pieces are inventive and suspenseful, including some jolting gags involving a hole in the floor, a power drill, an empty shower stall, and of course, a rousing moment involving a sputtering chainsaw and an axe. The last half hour is a particular tour de force as the final girl plays a game of cat and mouse with the killer, who calmly strokes a yowling cat surrounded by layers of airborne bird feathers on a stage filled with dismembered actors. Also noteworthy is the electronic score by Simon Boswell (hot off of Demons 2 and Phenomena) and Stefano Mainetti. This also turned out to be the high point for its production company, Filmirage, which was founded by director Joe D'Amato and also turned out other horror titles like Witchery, Ghosthouse, Killing Birds, Door into Silence, and of course, Troll 2. Oddly enough, the screenplay was actually conjured up by "Lew Cooper," alias George Eastman / Luigi Montefiori, the star of D'Amato's The Grim Reaper and Absurd.

StageFright didn't receive much theatrical play outside of Europe and Asia, so most of its initial reputation surged thanks to home video including a sought-after VHS release from Imperial and a beautifully-designed Japanese laserdisc which still remains the only accurate home video

representation of the Dolby Stereo English mix heard in 35mm screenings, including the cat meowing over the main titles moving 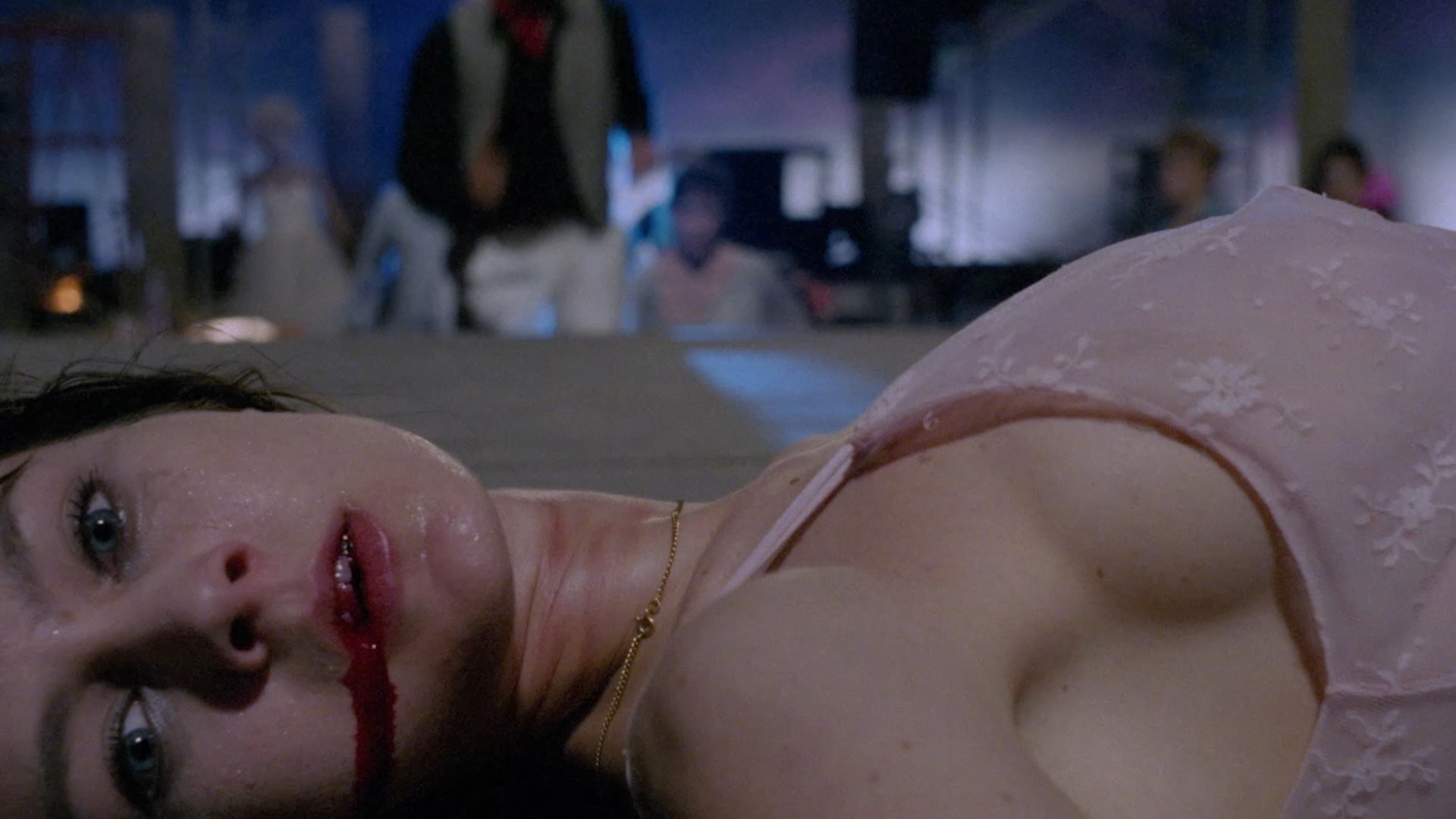 around dramatically between the audio channels. Not surprisingly, the film has had a healthy life on DVD since the early '00s including a solid a/v presentation from Anchor Bay, later ported over to Blue Underground (with the theatrical trailer and a Soavi text bio as the sole extras). The 2014 Blue Underground revisit outfits the film as the special edition it truly deserves, in both Blu-ray and DVD versions. The Blu-ray is obviously the way to go as it features a welcome uptick in detail across the board and also reveals far less print damage than the older transfer; colors also look solid with very red blood and lots of moody shades of blue, a scheme also found in Dario Argento's nearly simultaneous and not dissimilar Opera (on which Soavi also worked). The framing is very close to the earlier transfer, adding a slightly extra bit of info on the sides while repositioning the vertical framing a tiny notch. Audio is presented in English DTS-HD 5.1 and 2.0, sounding heftier but directionally very similar to the same mono mixes heard on the older DVDs. (It's also very, very slightly out of sync either way, but given the nature of the dub the majority of viewers probably won't notice.) Subtitles are offered in English, French or Spanish.

Of course, the main attraction for many here will be the bounty of new extras, kicking off with "Theater of Delirium" (19m1s). This interview with Soavi (who also has a small role in the film as a cop fixated on James Dean) is presented in SD and covers the director's early associations with D'Amato, the circumstances behind the film's creation ("a crazy idea"), the reason he went off to work for Terry 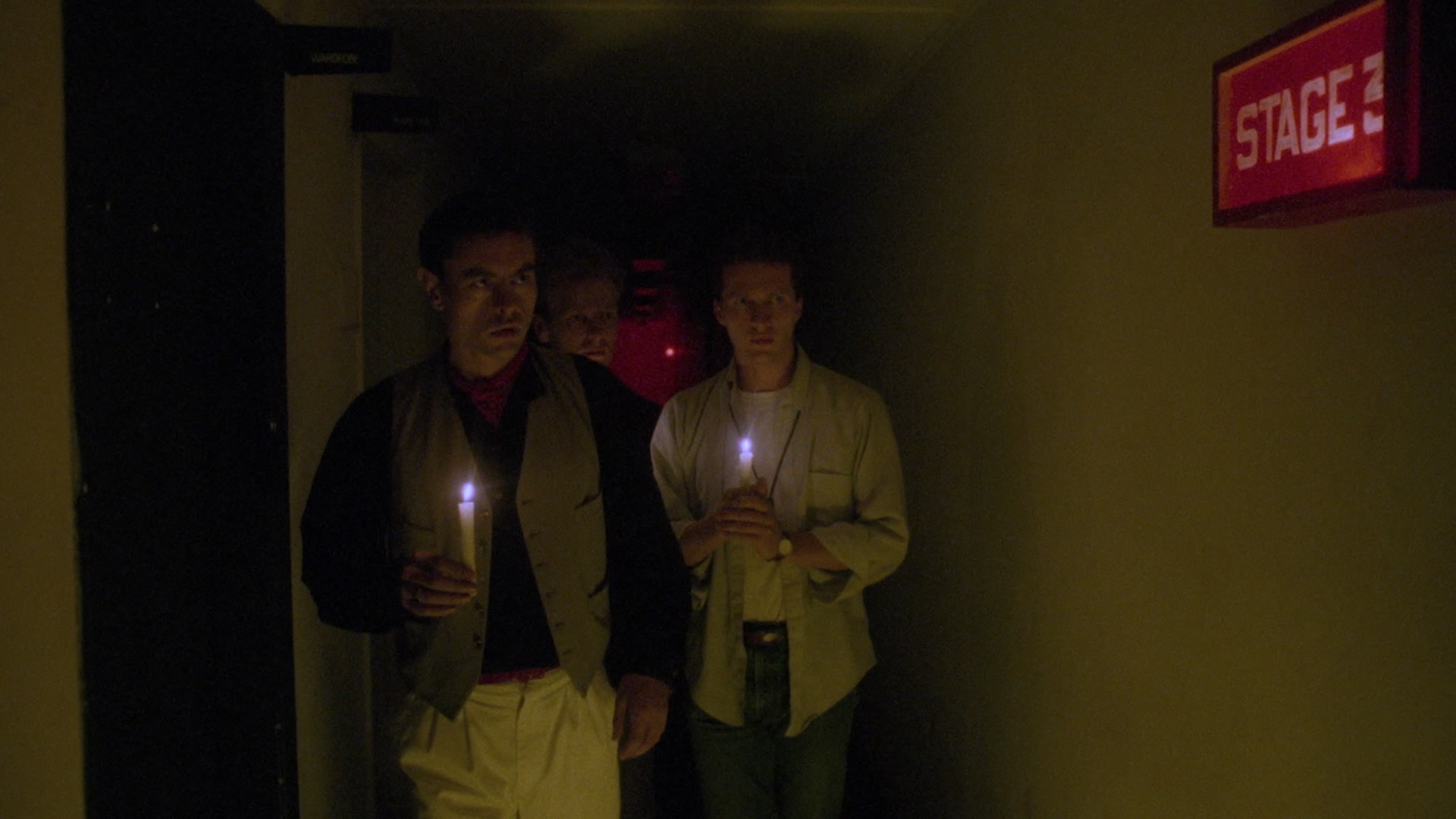 Gilliam, the creation of that giant key seen in the climax, and much more. Interestingly, no attention is given to Soavi's later films 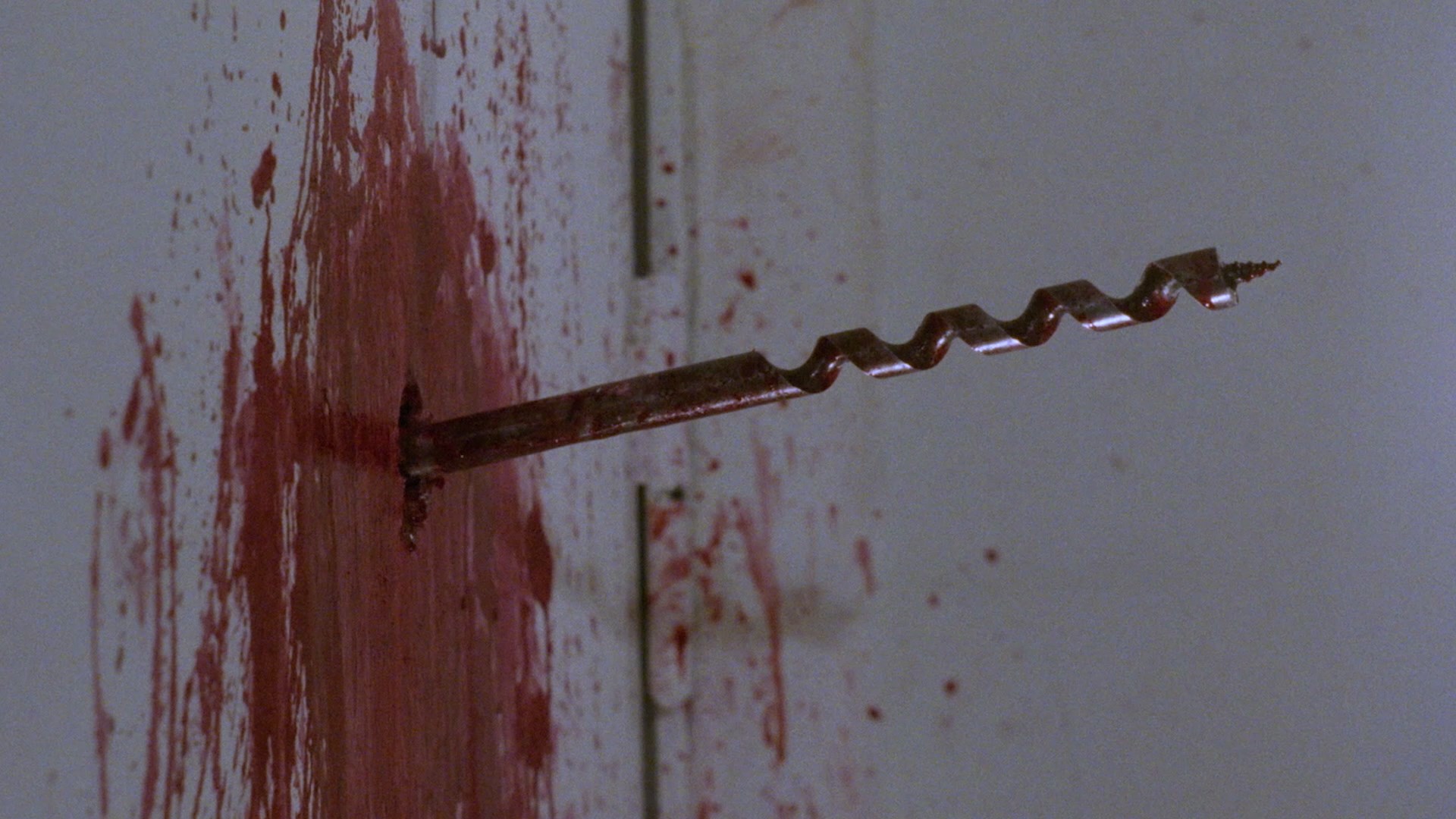 (most notably The Church, The Sect, and Dellamorte Dellamore), so we can only hope those will get the same treatment somewhere down the road. Things get significantly crazier with "Head of the Company" (11m40s) (in HD), a chat with David Brandon. The Irish-born actor talks about D'Amato, Soavi, several of his co-stars (including some pretty unexpected samples of fellow actor Robert Gligorov's photographic work that might ruffle a few viewers' feathers), and his other colorful roles including one hilarious incognito bit behind a fake beard. The always entertaining Radice gets his turn next with "Blood on the Stage Floor" (14m) (also SD) in which he talks about appearing with Soavi in City of the Living Dead, doing some tweaking to the film's screenplay, the difficulty of shooting animal guts without air conditioning, the reason he nicknamed Soavi "Peter Pan," and some of his later films they made together for producer Dario Argento. "The Owl Murders" (11m21s) (HD) features makeup effects artist Pietro Tenoglio covering the challenges of the locale, the camaraderie of the low-budget shooting conditions, the plaster required to pull off a decapitation, and the advantages of improvising gore effects in your own garage. "The Sound of Aquarius" (18m2s) with composer Simon Boswell plays like something of a companion piece to his equally excellent interview on Synapse's Demons 2 release, though here you get some fantastic early video footage of him performing on stage along with lots of memories about Argento, the odd collisions of rock music and soundtrack work, the contributions of Mainetti, and a peculiar 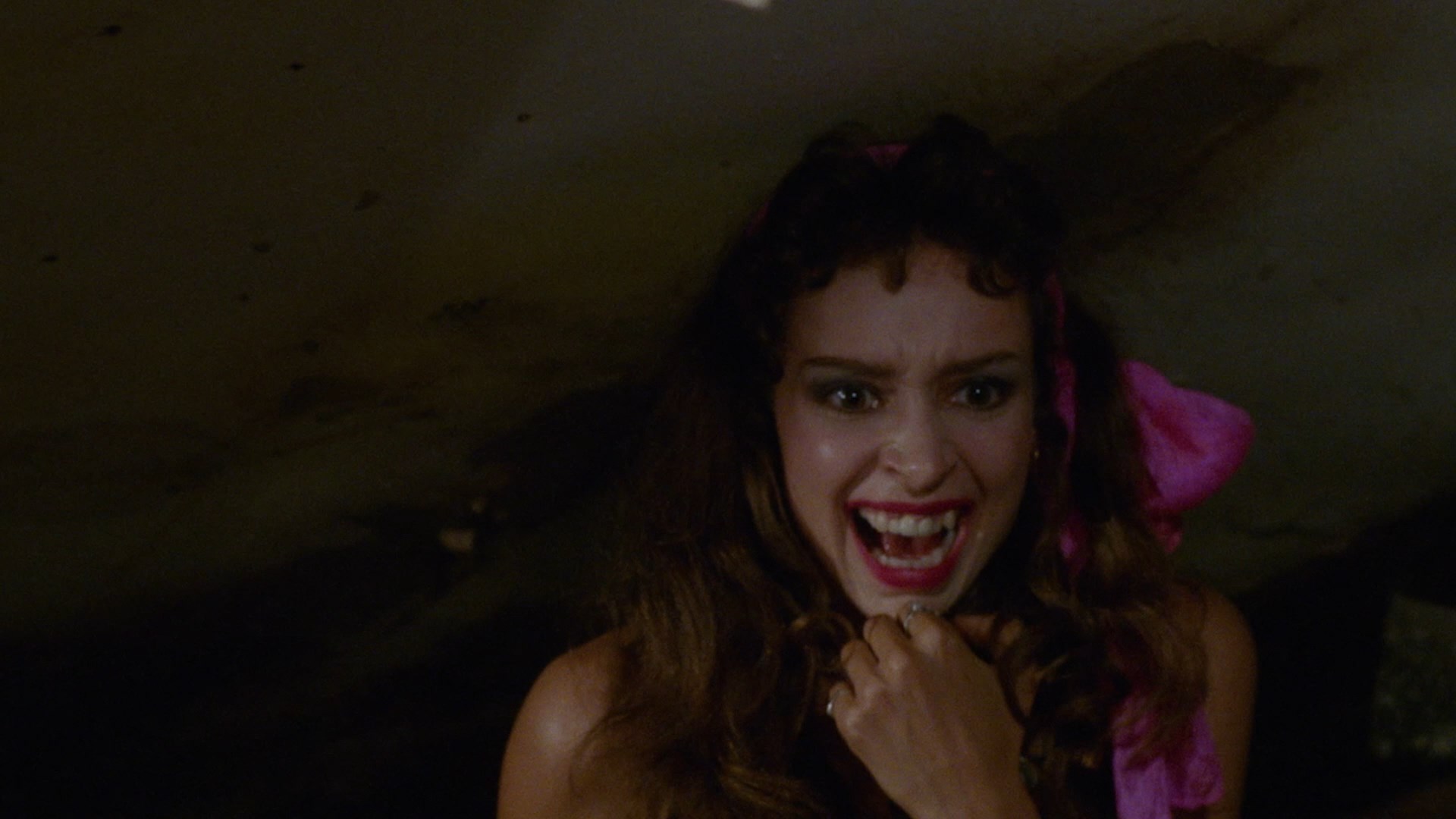 project about Pope John Paul II. Finally the disc rounds out with the theatrical trailer and a gallery of stills and poster art. 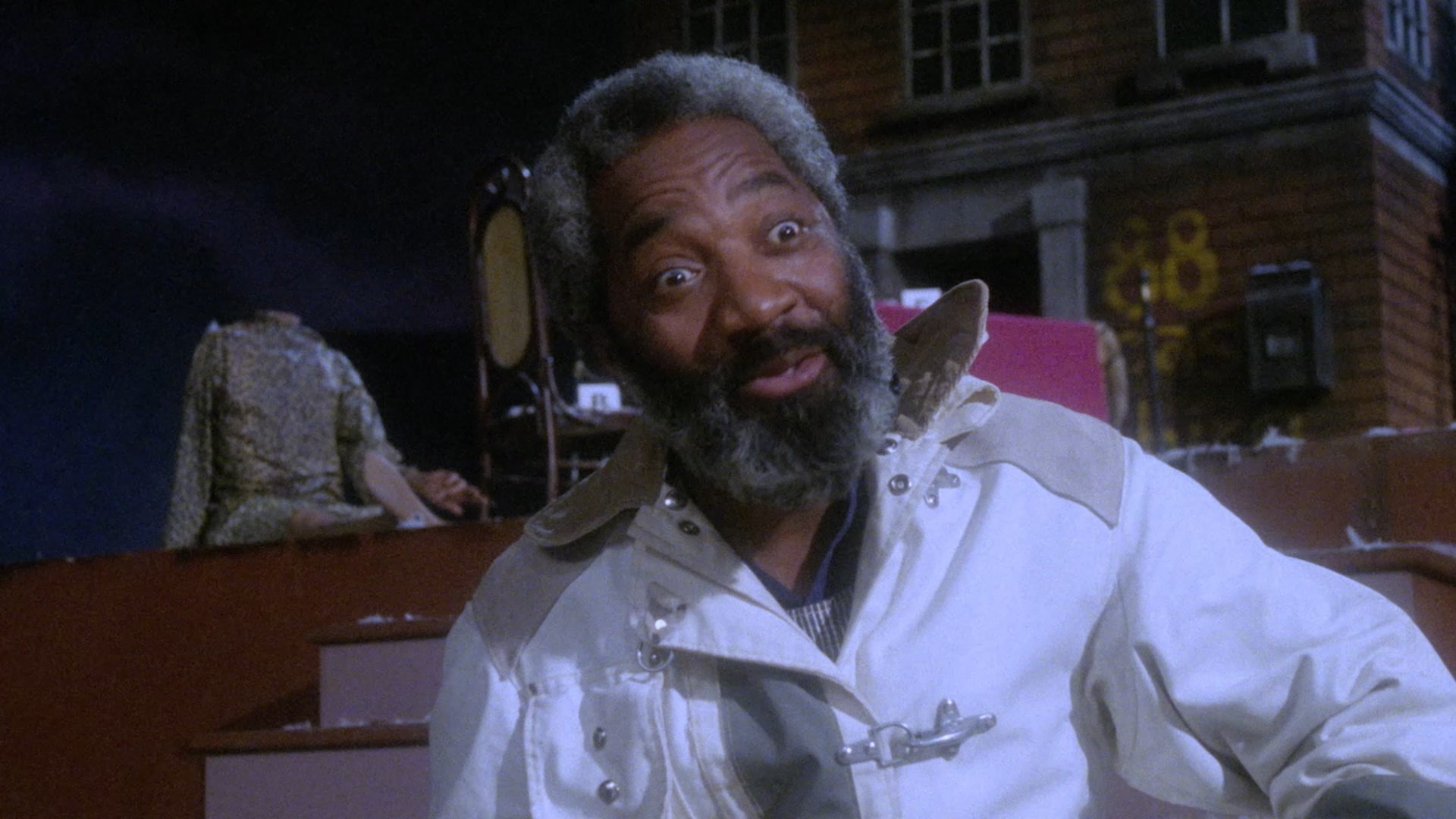 on the heels of the Blue Underground release came another 2014 edition in the U.K. from the very short-lived Exposure Cinema, taken from the same master. However, it's been opened up a bit to 1.78:1 versus the Blue Underground's 1.85:1 and benefits from the extra breathing room; the compression is a tad dodgier but it still looks quite nice for the most part. Here you just get an LPCM 2.0 English audio track that is, again, that old mono mix. "A Bloodstained Featherstorm" (28m3s) is an exclusive featurette with Soavi, Cupisti, Sellers, and Eastman reminiscing about the film, followed by "Giovanni's Method" (20m45s) with Radice covering his career path up to this film touching on other major ones like House on the Edge of the Park as well and the "sluggish" nature of Italian cinema in the '80s. "Alan Jones: The Critic's Take" (28m1s) features the film journalist giving more background about the film and Soavi's contributions to the substantially altered Eastman script, followed by the horror-oriented iteration of the Joe D'Amato: Totally Uncut documentary (54m43s) and a "Revenge of the Video Cassette" (25m12s) look at the unexpected 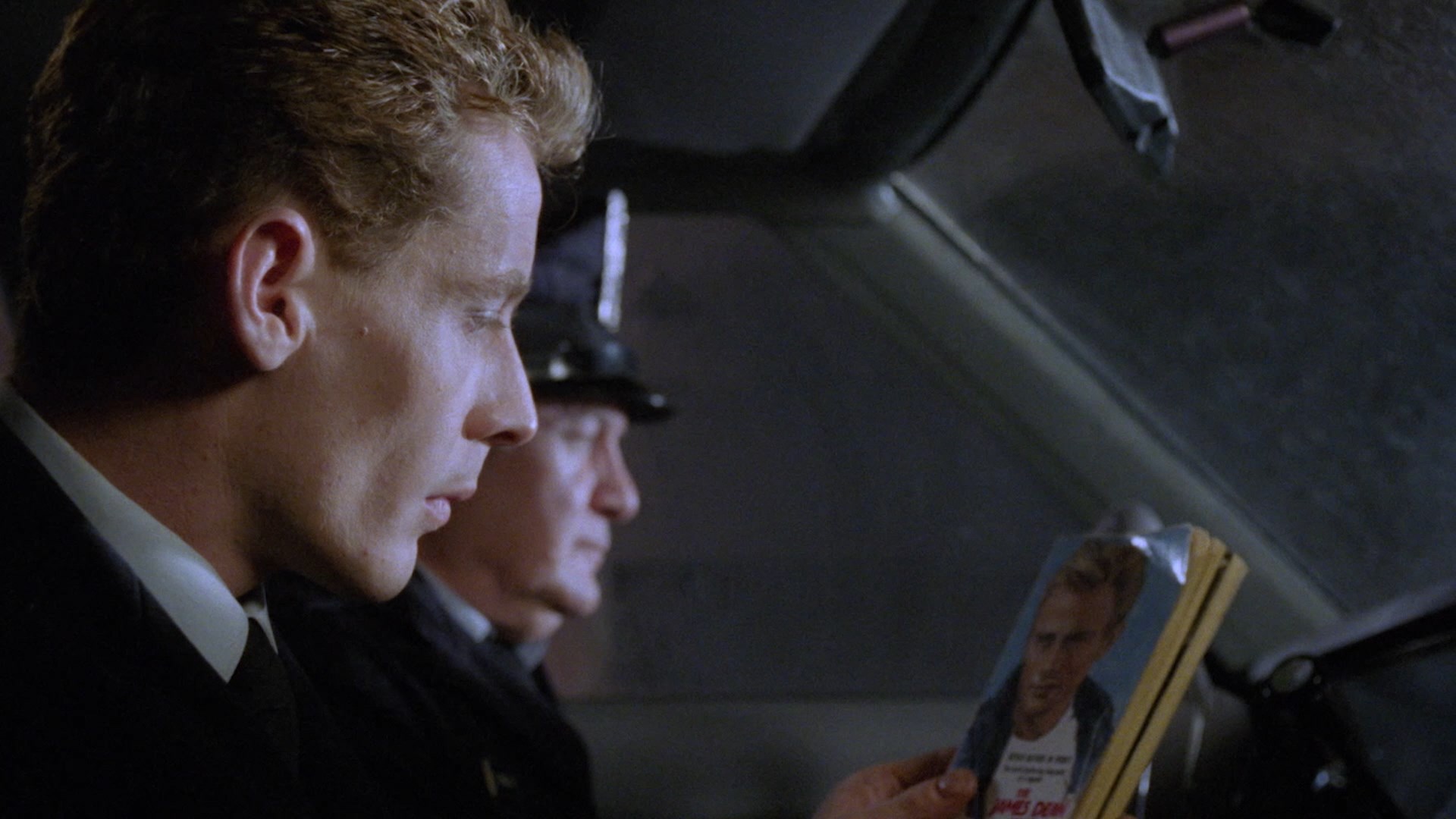 resurgence of VHS in the 21st century. Also included are a gallery (7m54s) of video and promotional art and photos, the English trailer, and a comparison (1m38s) to the previous cut U.K. 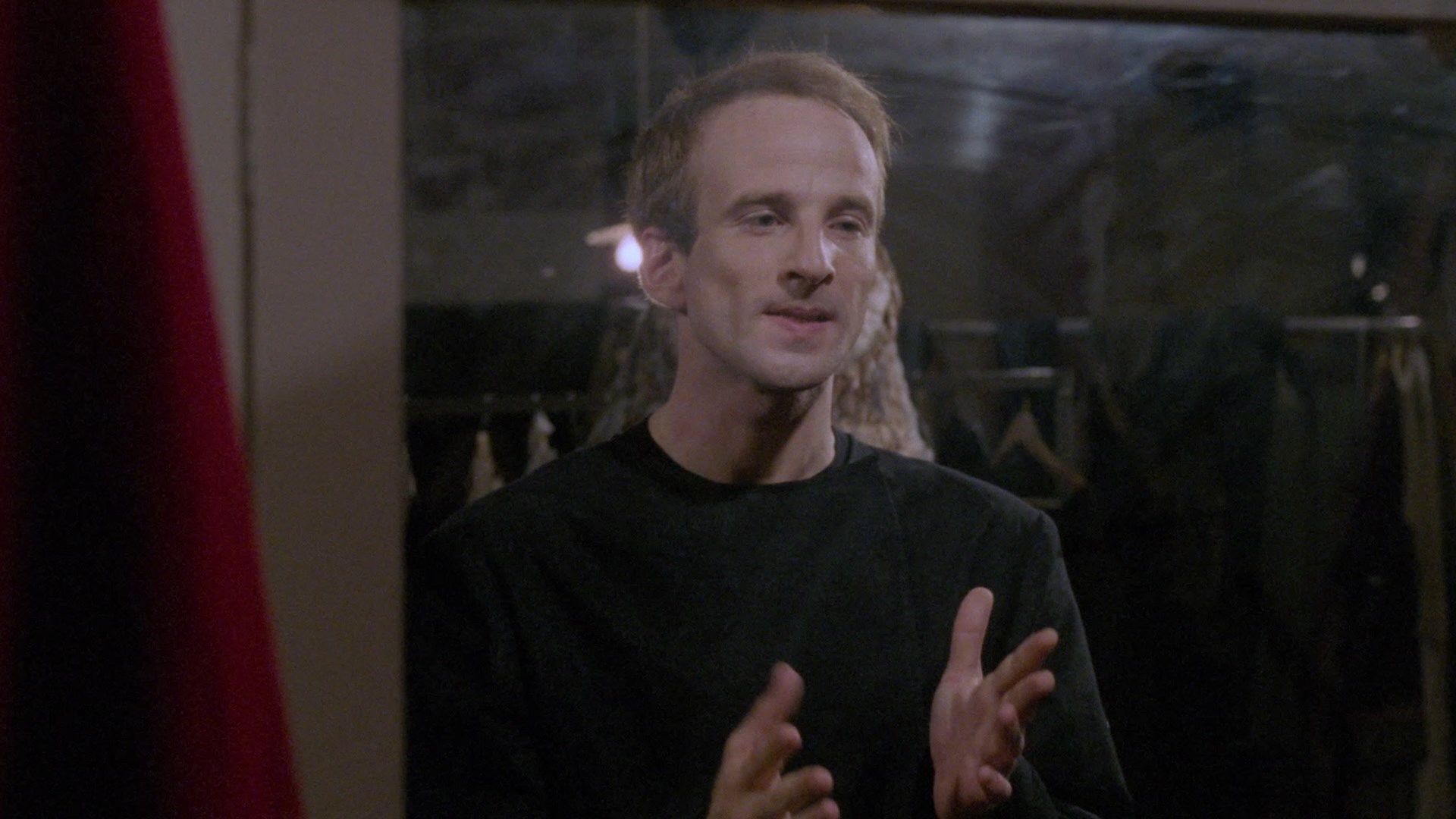 In 2021, Shameless Screen Entertainment brought Soavi's film back to the U.K. with a new Blu-ray special edition touted as a "new 4K-restored version" with "the director's colour grading and framing indications." The often blinding blue push in the older scan is pulled back a few notches here with reds and yellows balancing out more in the process, and the 1.78:1 framing adds more on the bottom while shaving a bit off on the sides. It looks balanced throughout without any visible issues, and it's definitely preferable to the tighter framing seen on the U.S. disc. The English LPCM track sounds the same as the one we've had since DVD, namely flat old mono again, with optional English SDH subtitles; however, a very big reason to snap this one up is the inclusion of the Italian track in glorious, true stereo, the first time it's been heard with the intended multi-channel mix on English-friendly home video in decades. The difference here is significant throughout with the film playing much better and more dramatically this way; it also doesn't hurt that the Italian version (with its own 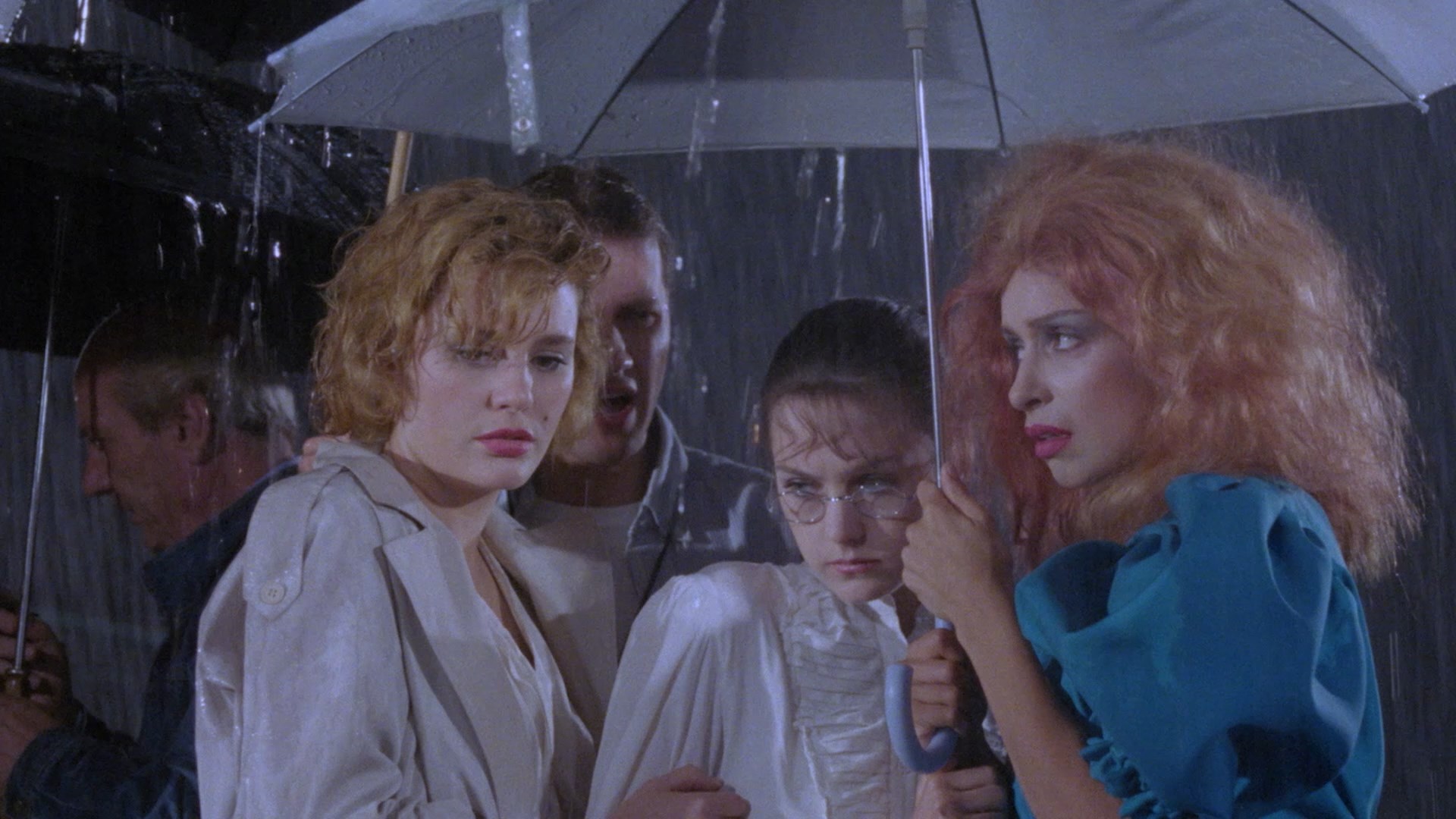 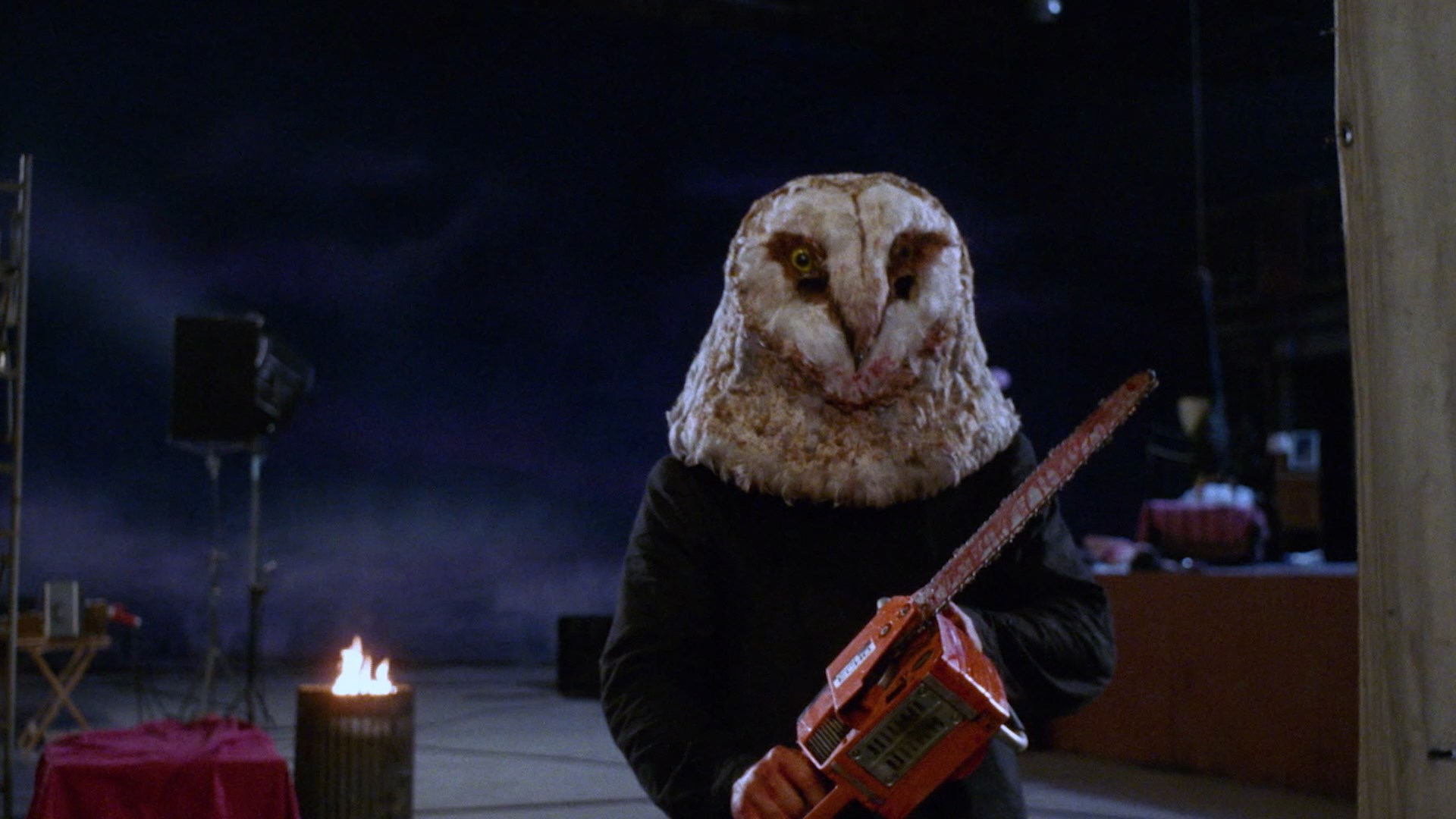 from the familiar English version.

In the new "Staging the Fright" (44m22s), Soavi gives a much longer and more detailed history of the film and his professional relationship with D'Amato than before, as well as the differences working with Dario Argento and Gilliam, his own creative process, the appeal of Agatha Christie-inspired body count conceit, the influence of some key works of fine art, and some of the key shot decisions he made. In "Theatre of Blood" (21m1s), Radice chats about all things Soavi from their early days acting together on City of the Living Dead through his approach to his juicy role in this film, including the less than optimal shooting location and the threadbare nature of the production at times. Finally in "The Last Performance" (21m14s), Brandon goes into his back-to-back shooting with the Taviani brothers on Good Morning Babylon, the effective nature of the isolated sound stage, his previous encounters with Soavi and D'Amato playing Caligula, and the balance on set between director and producer. 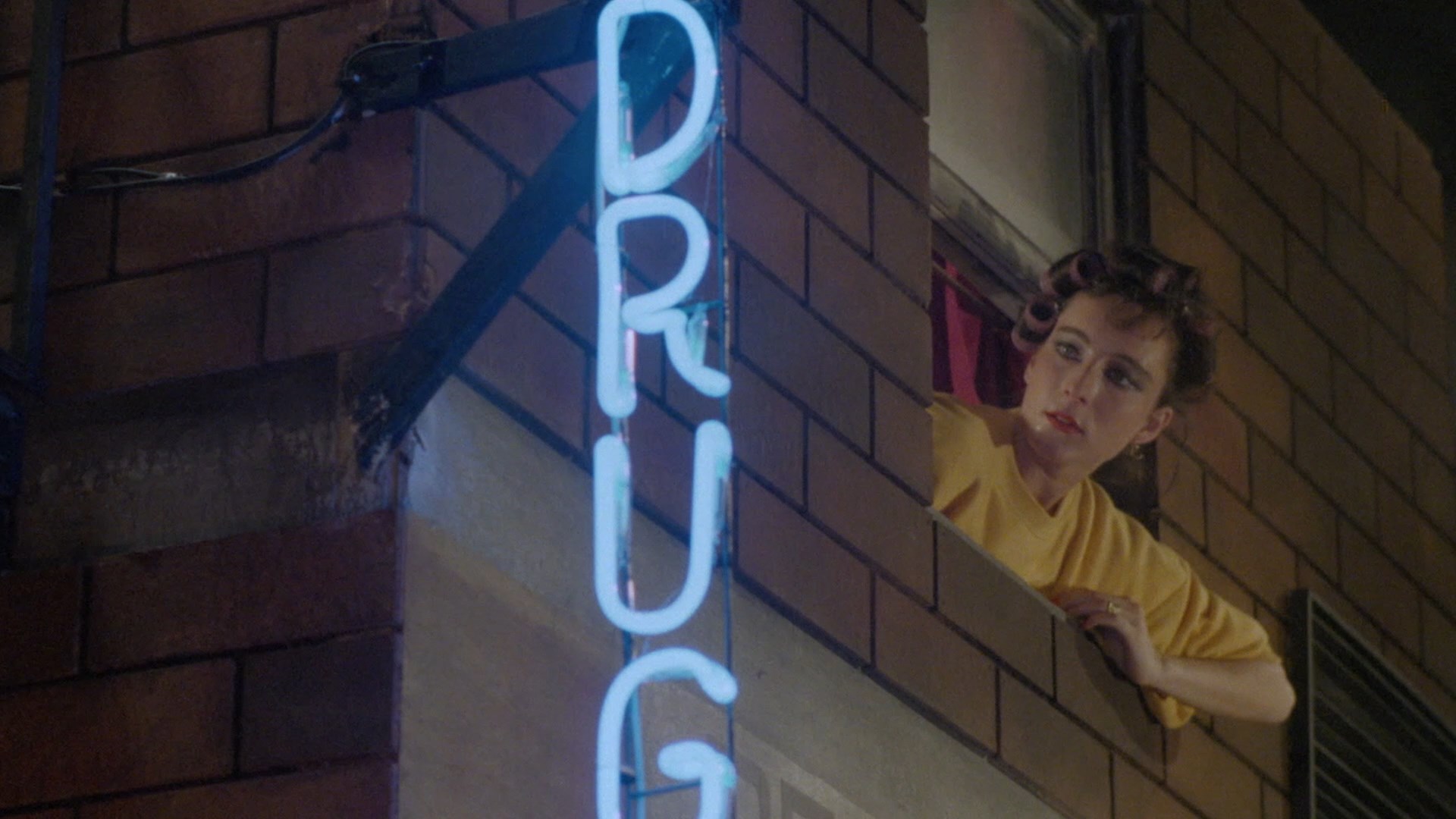 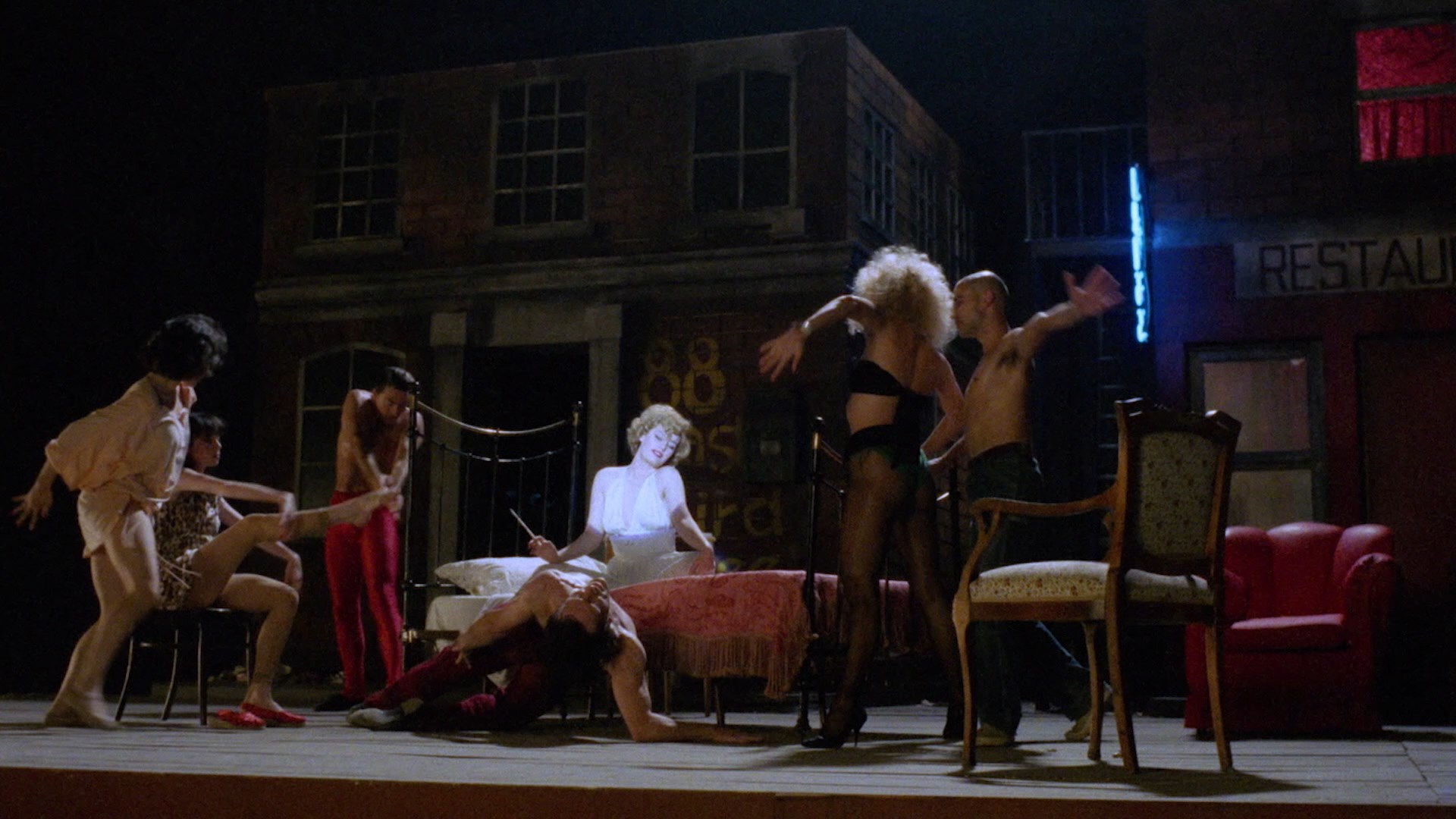 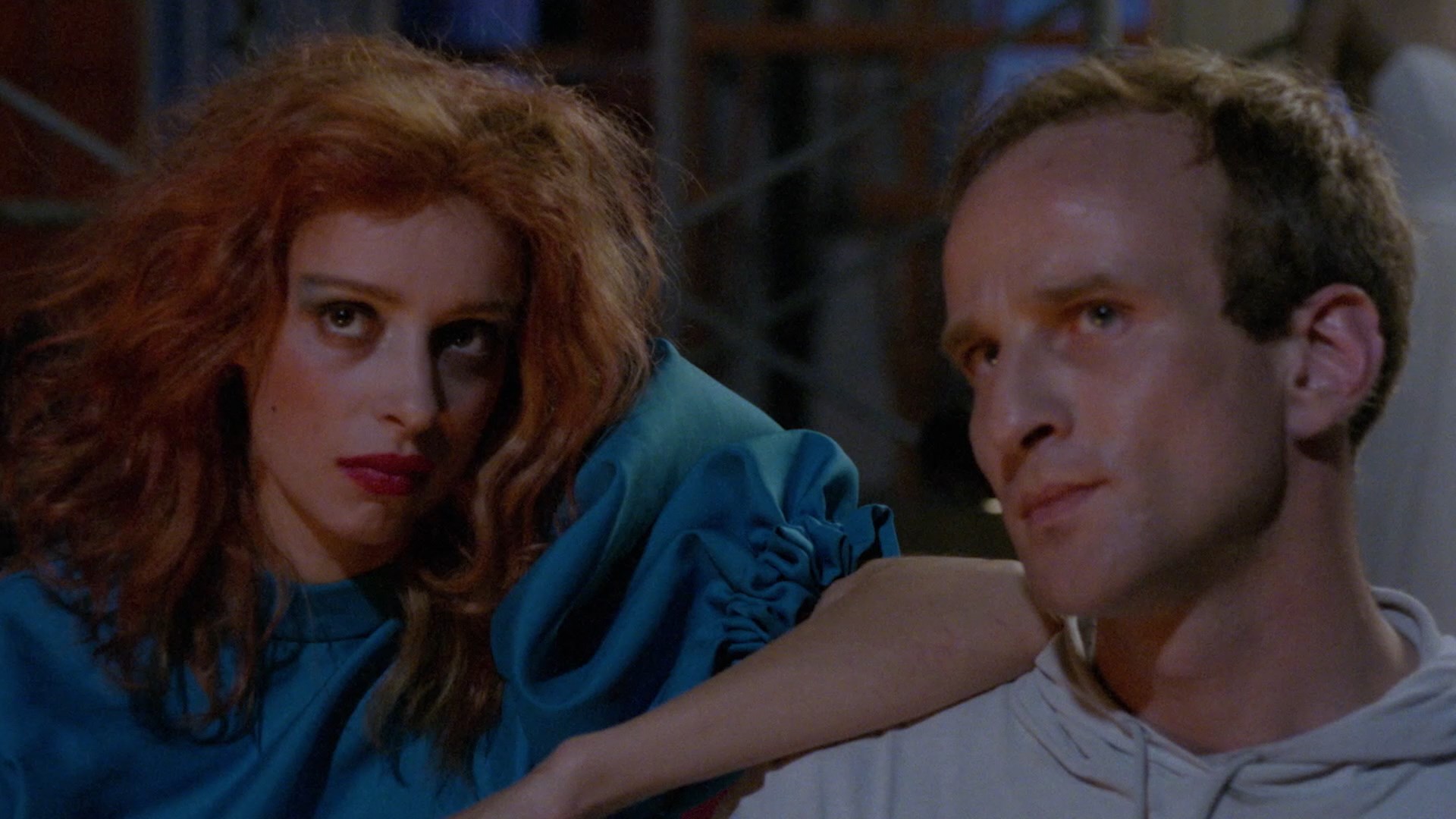 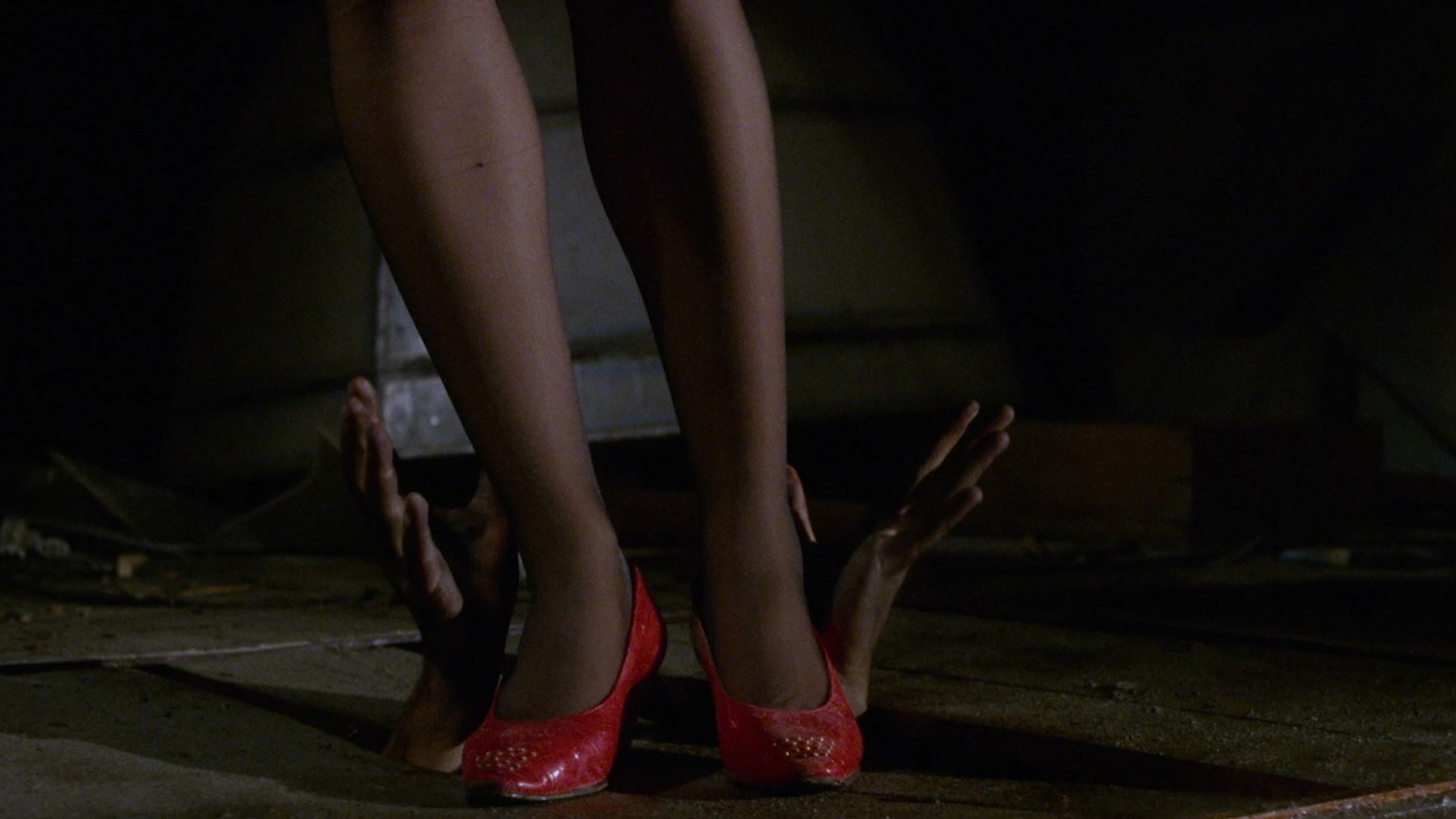 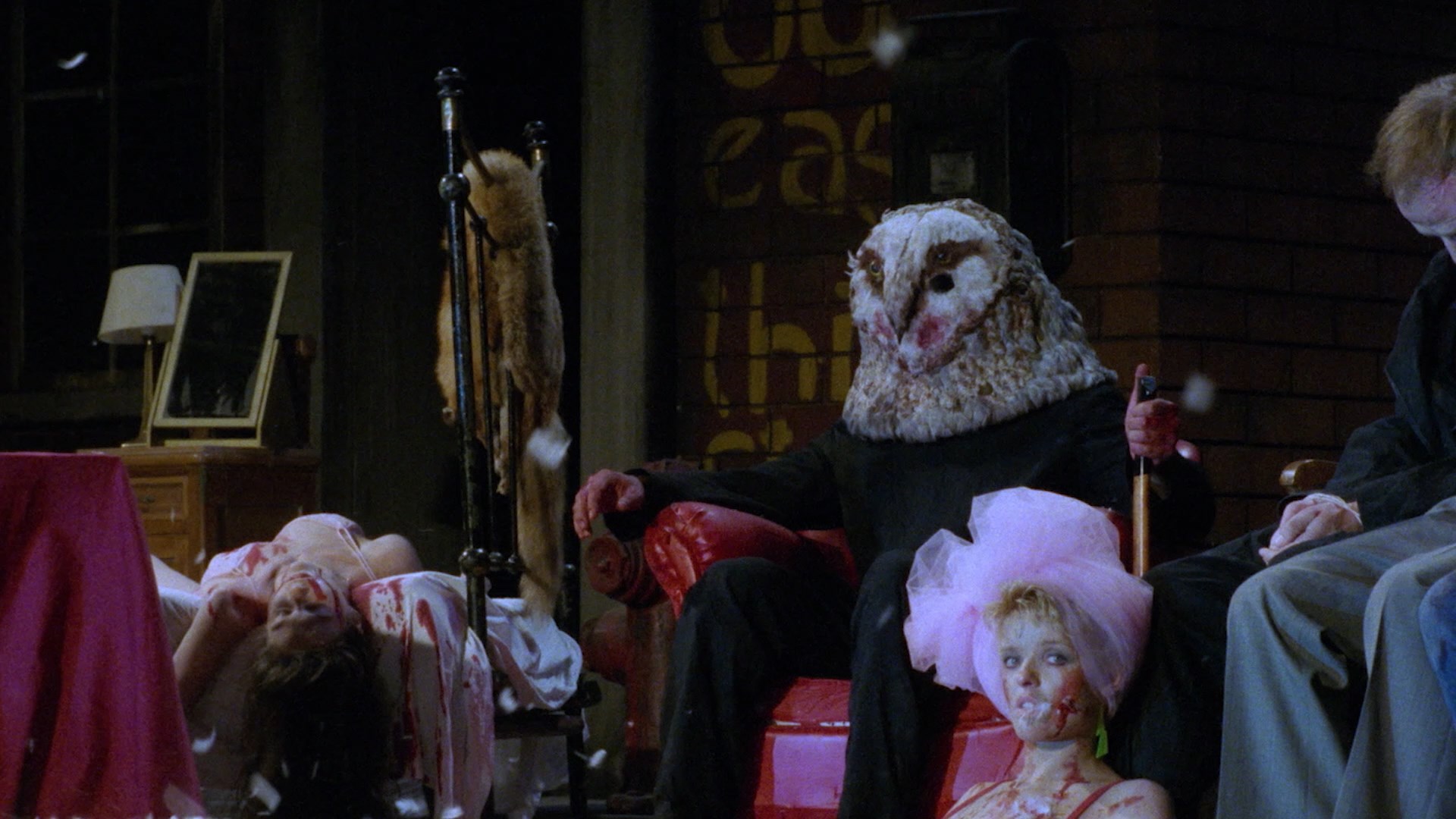 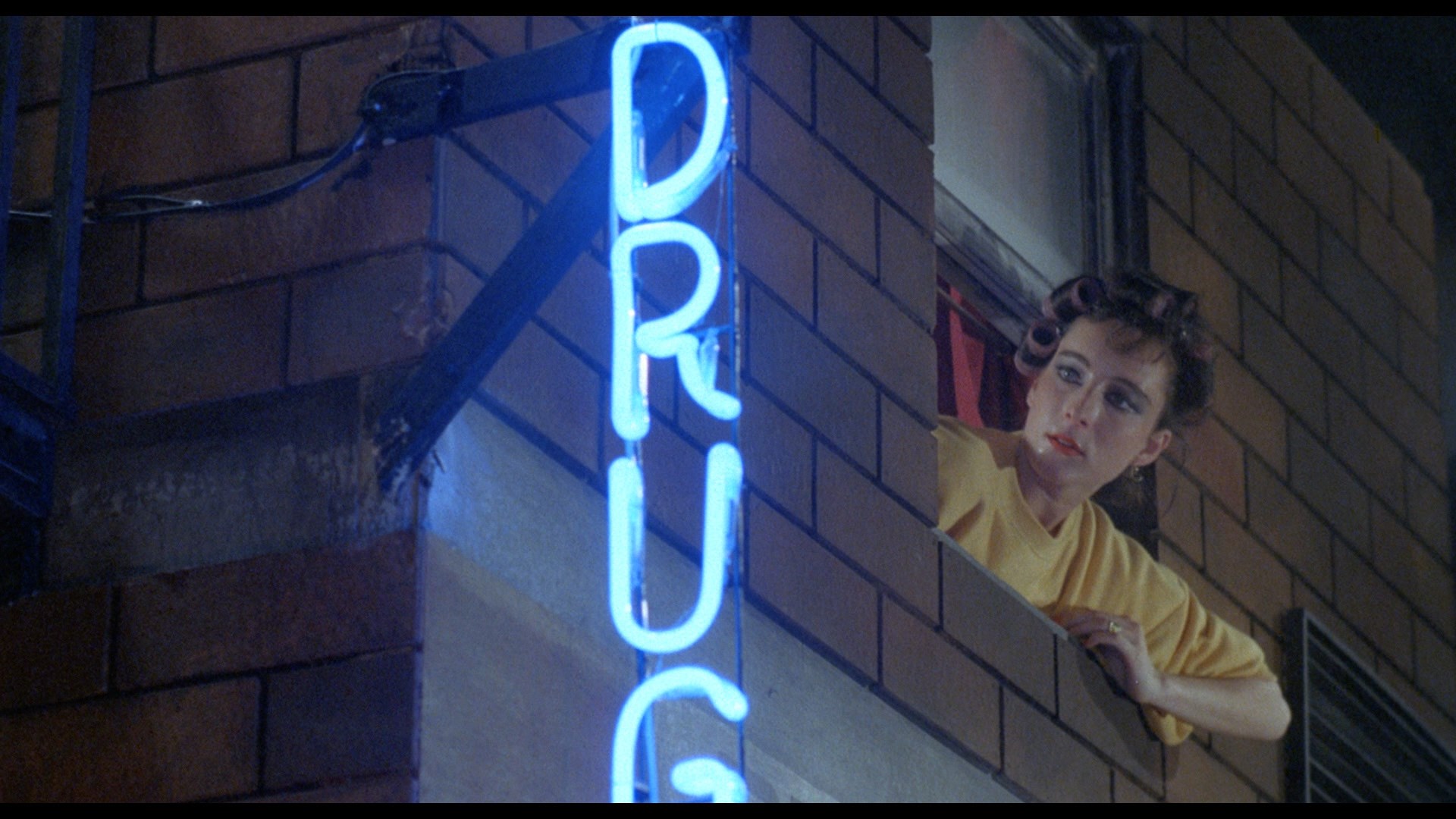 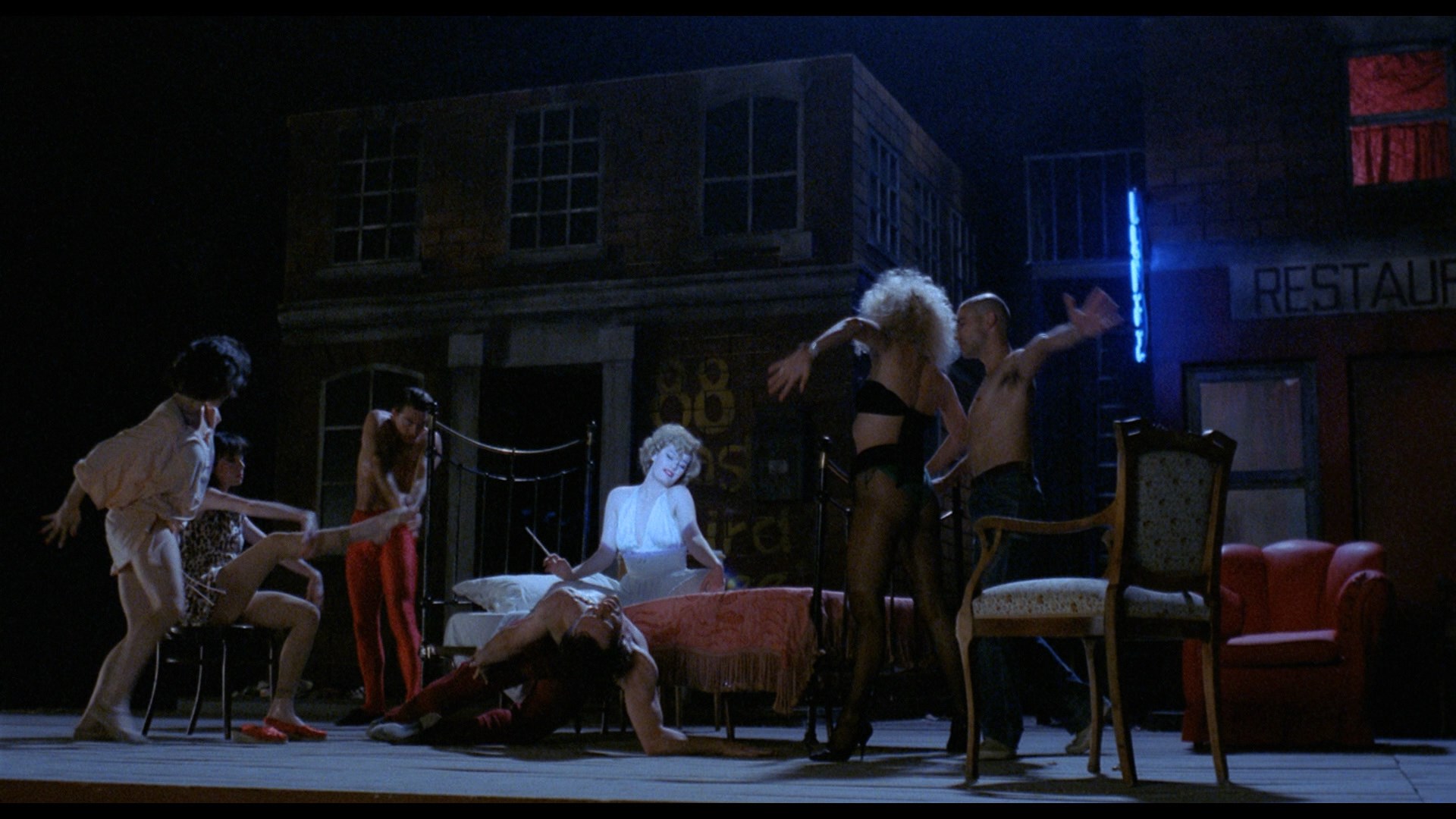 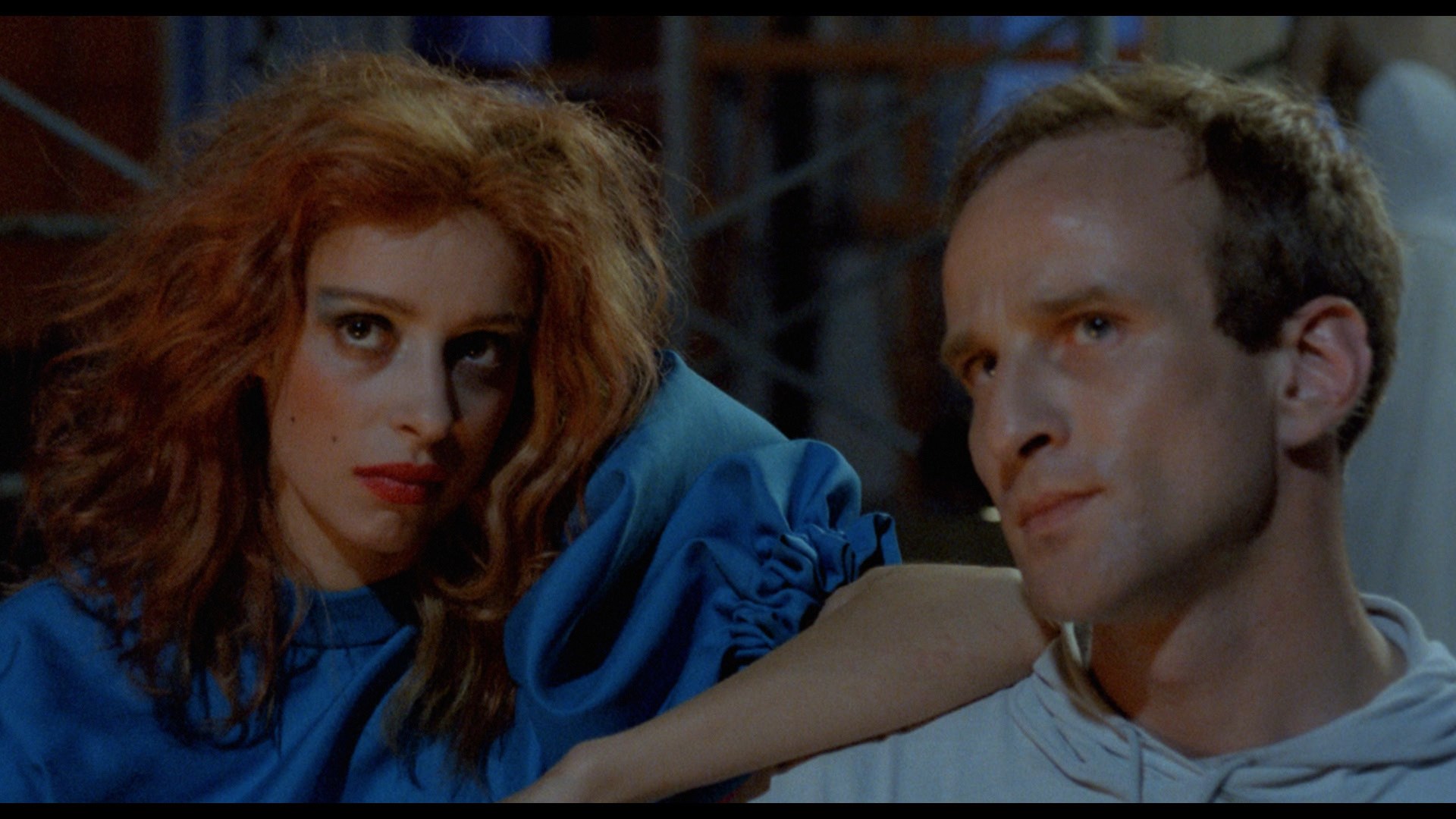 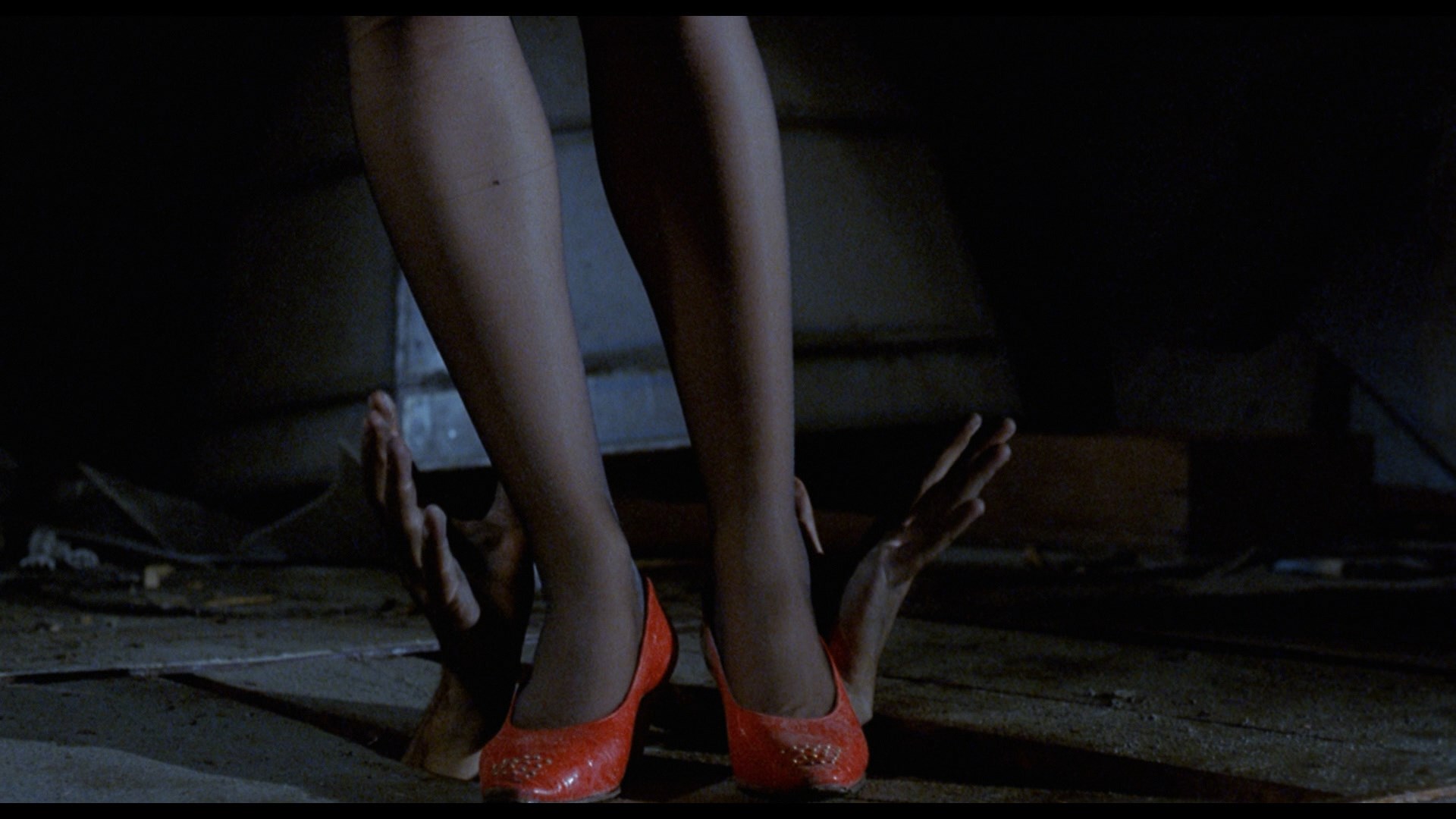 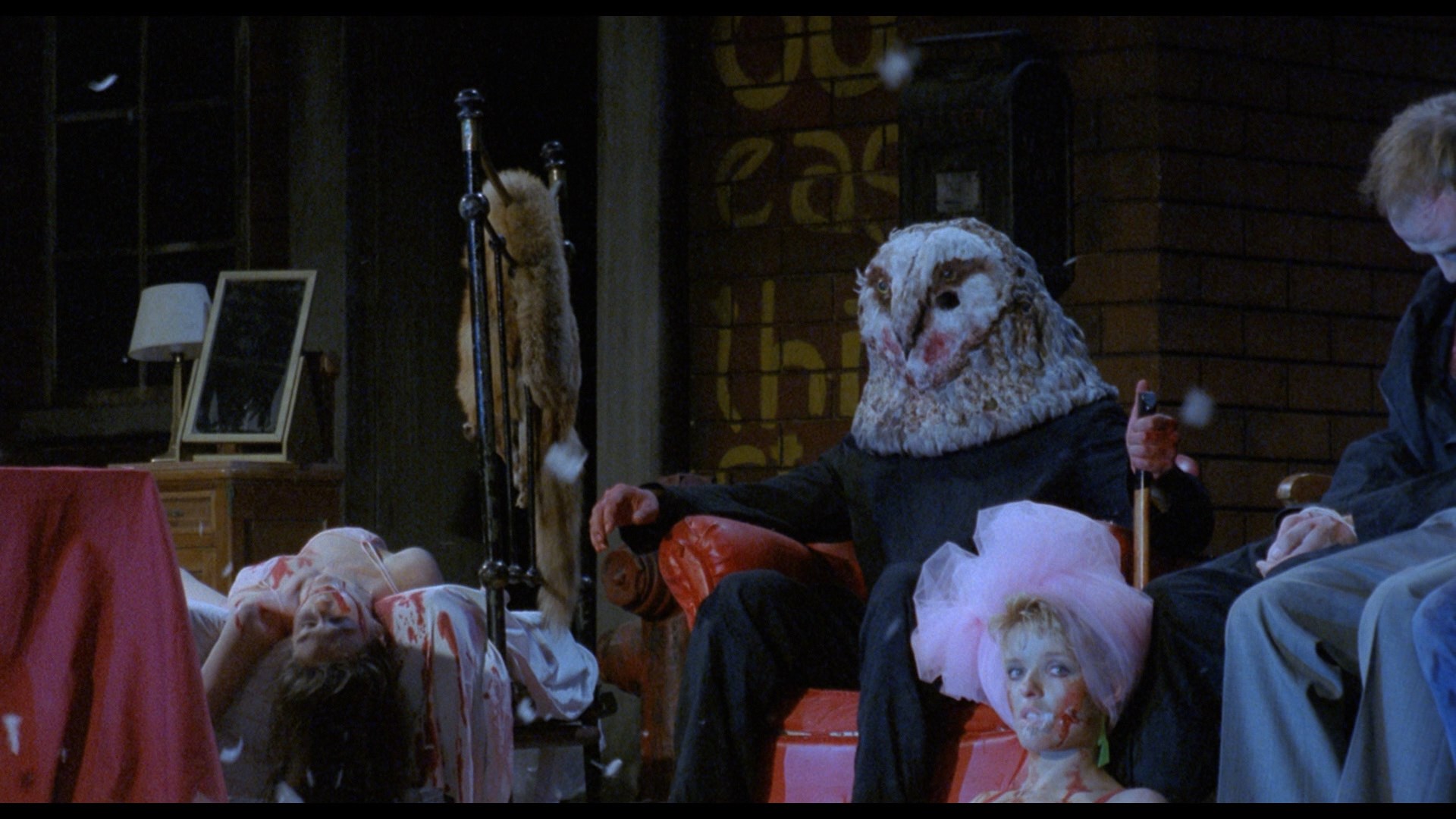 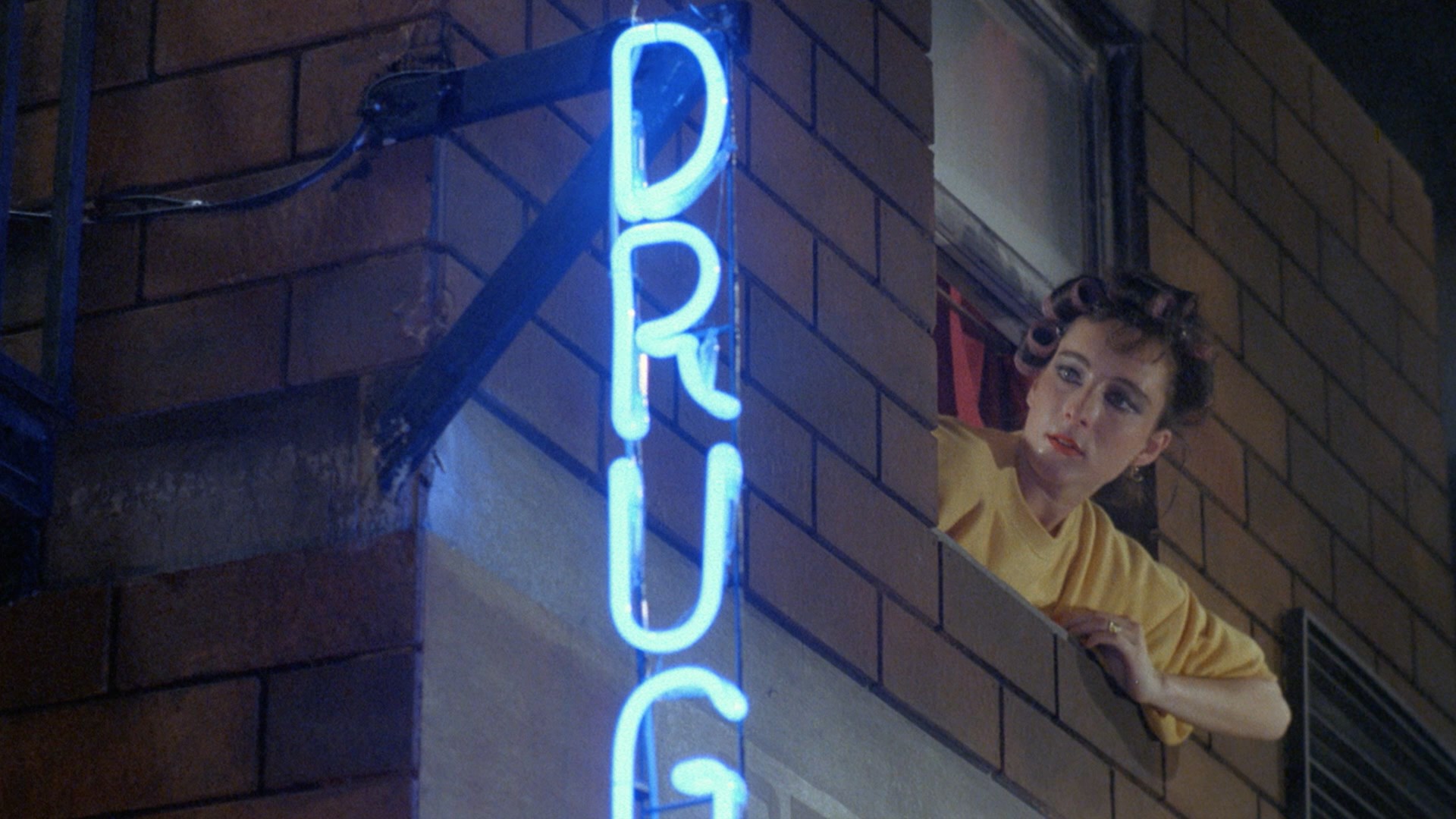 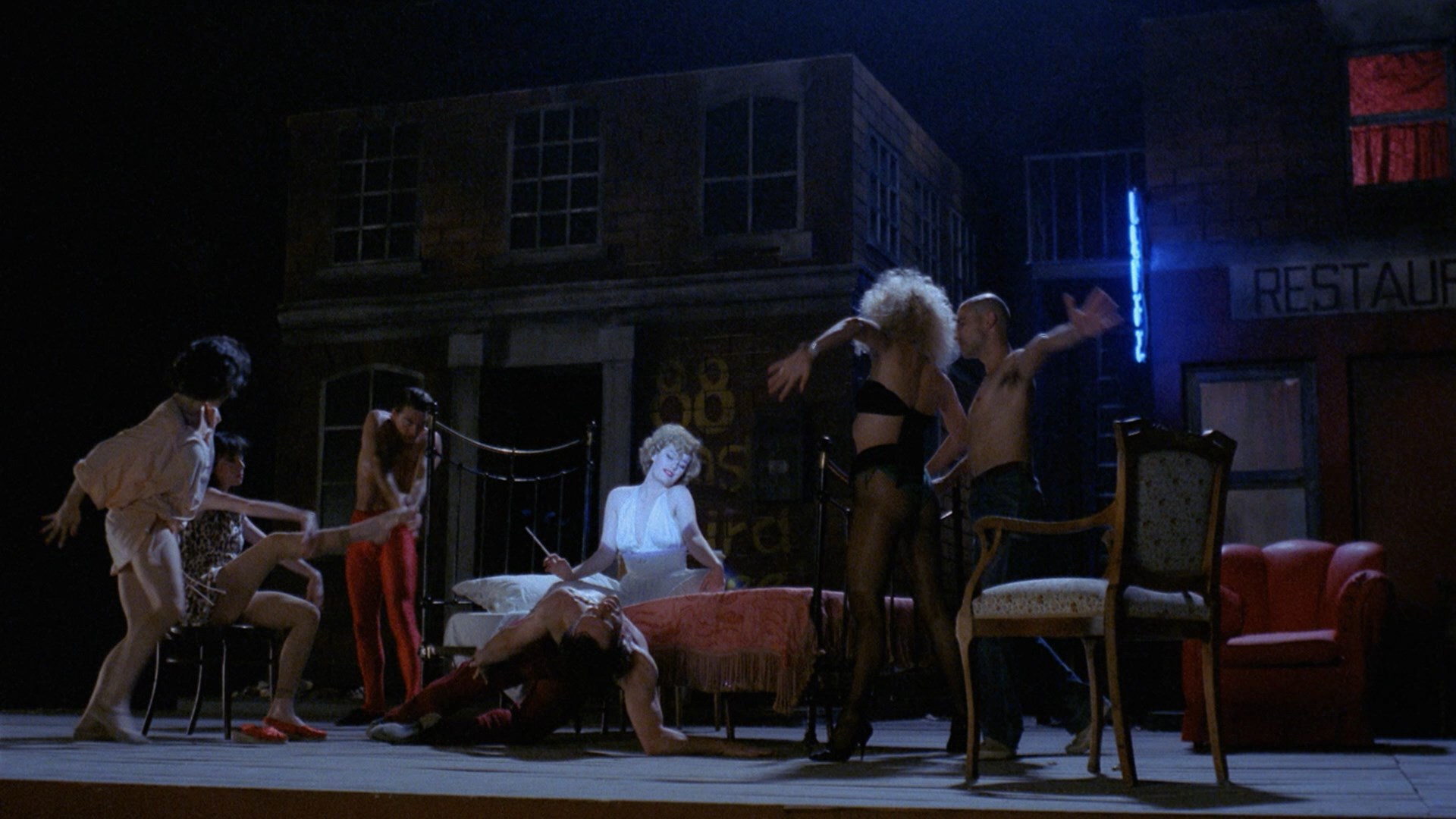 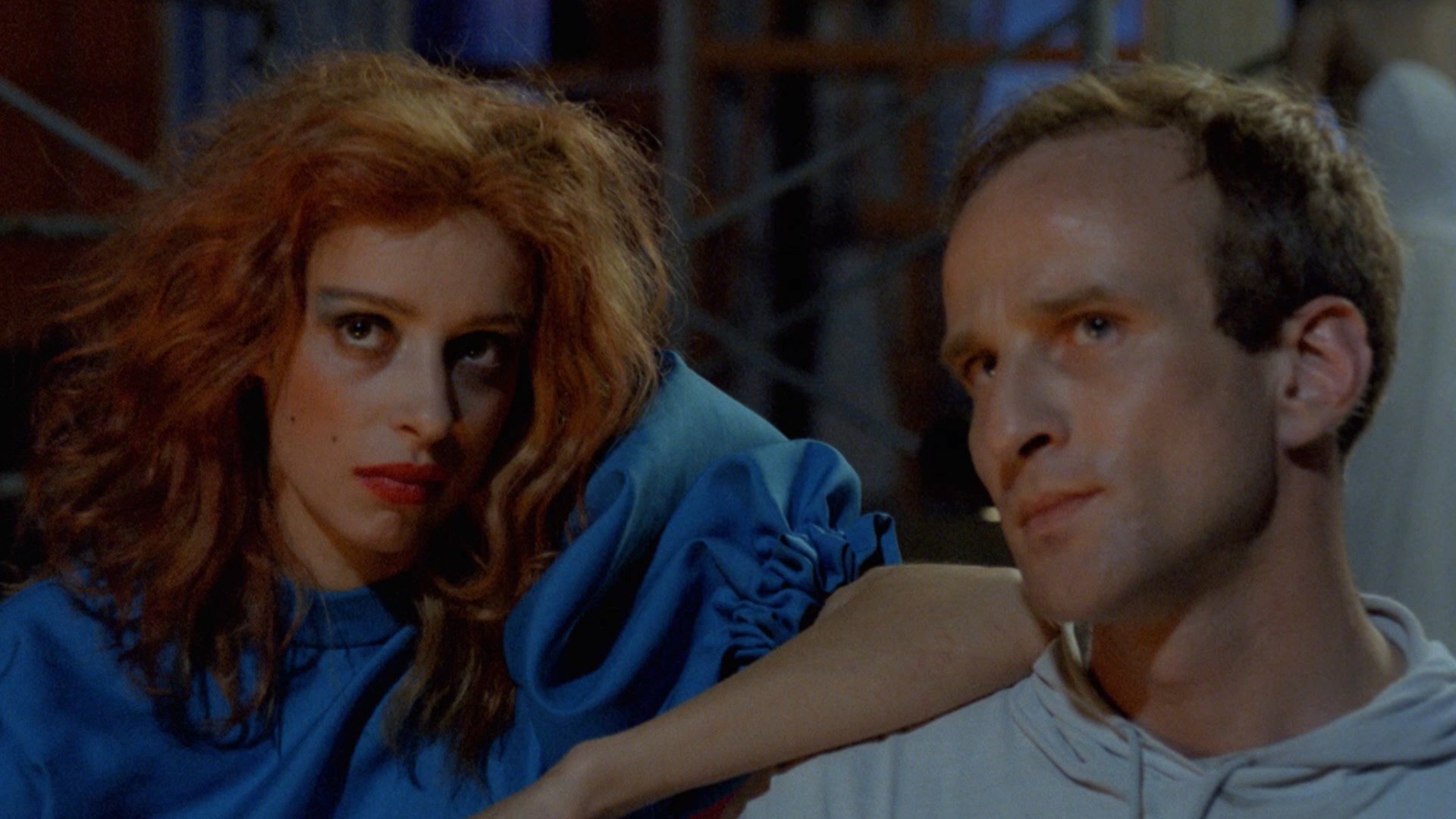 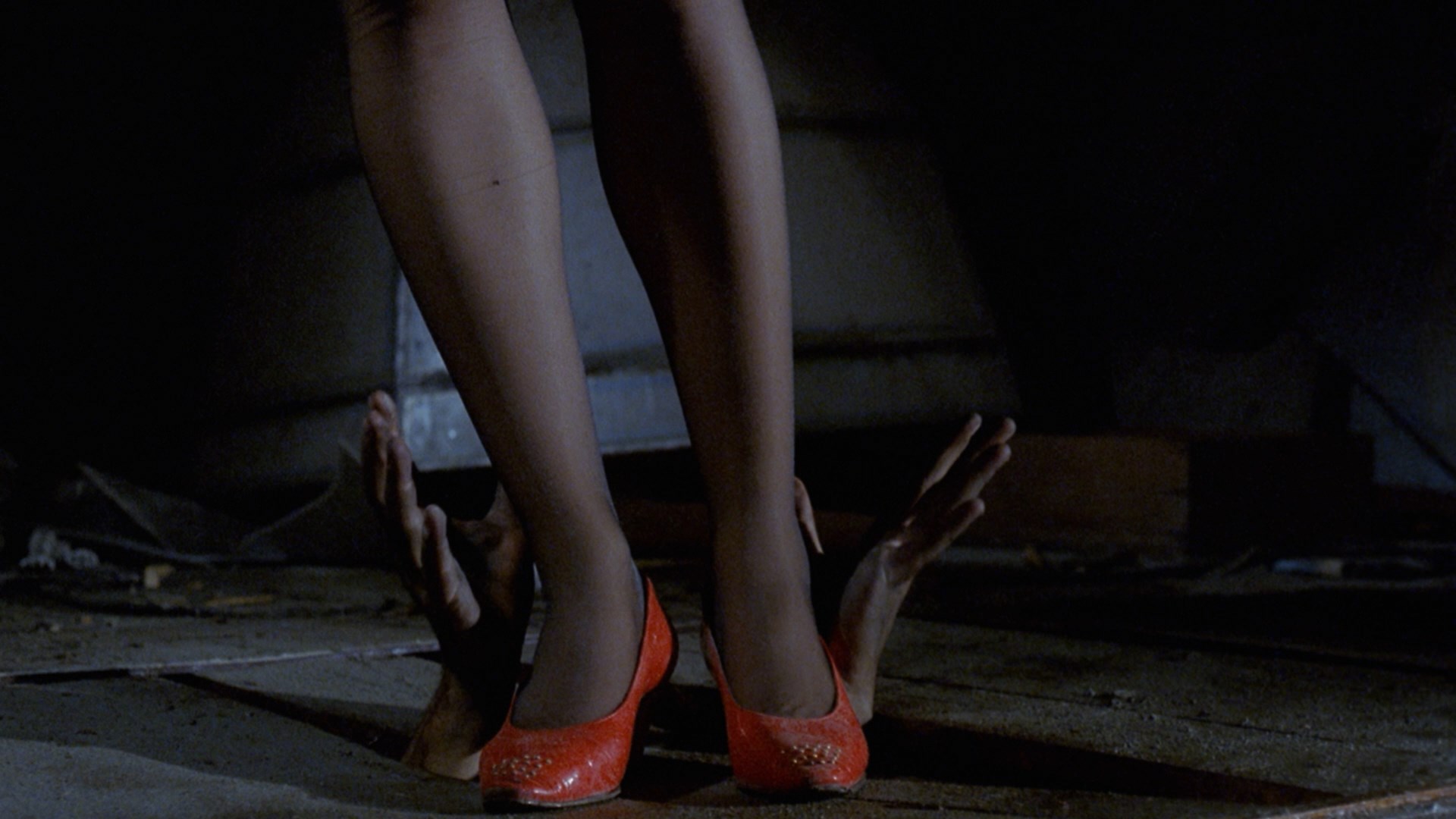 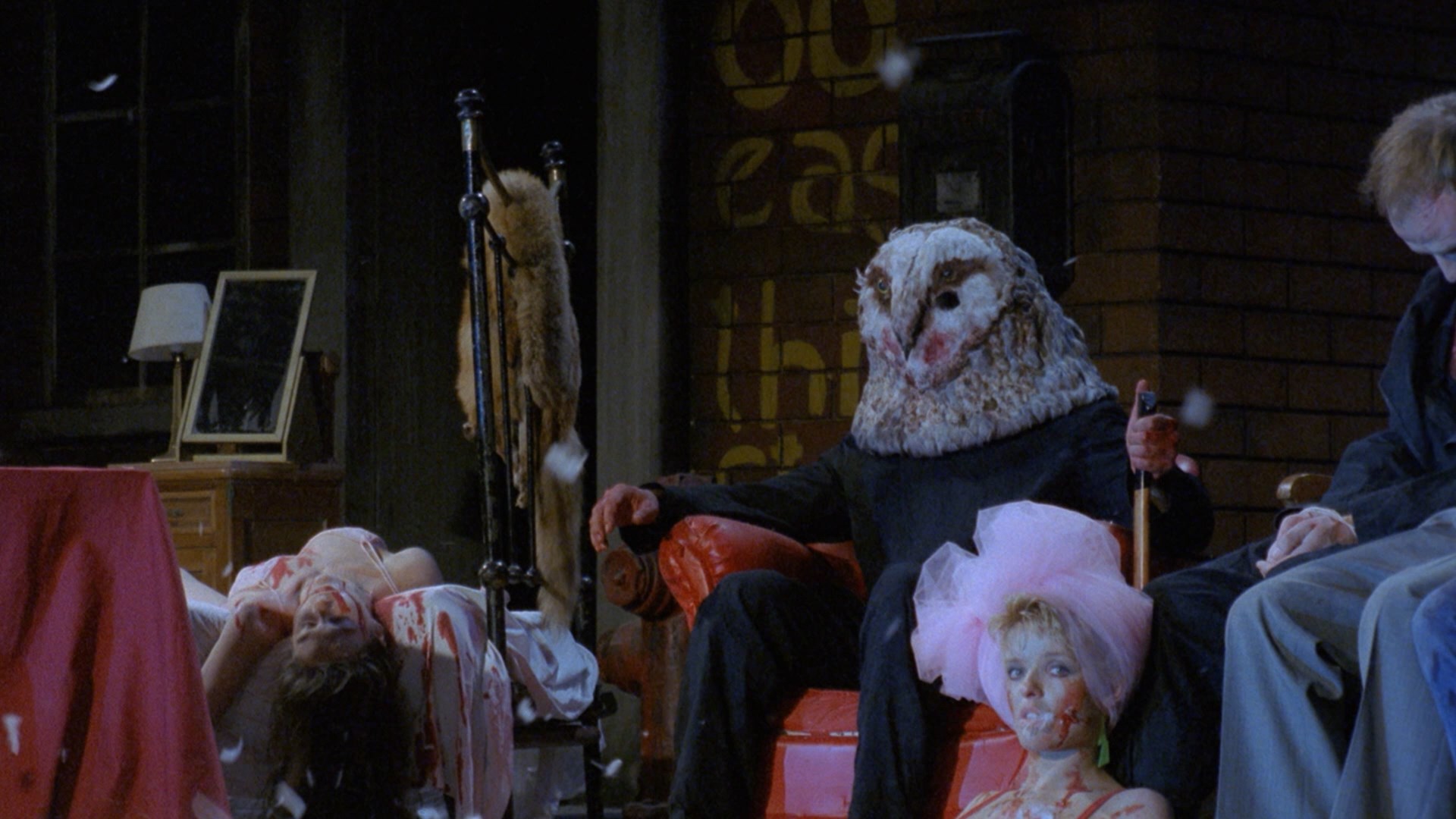