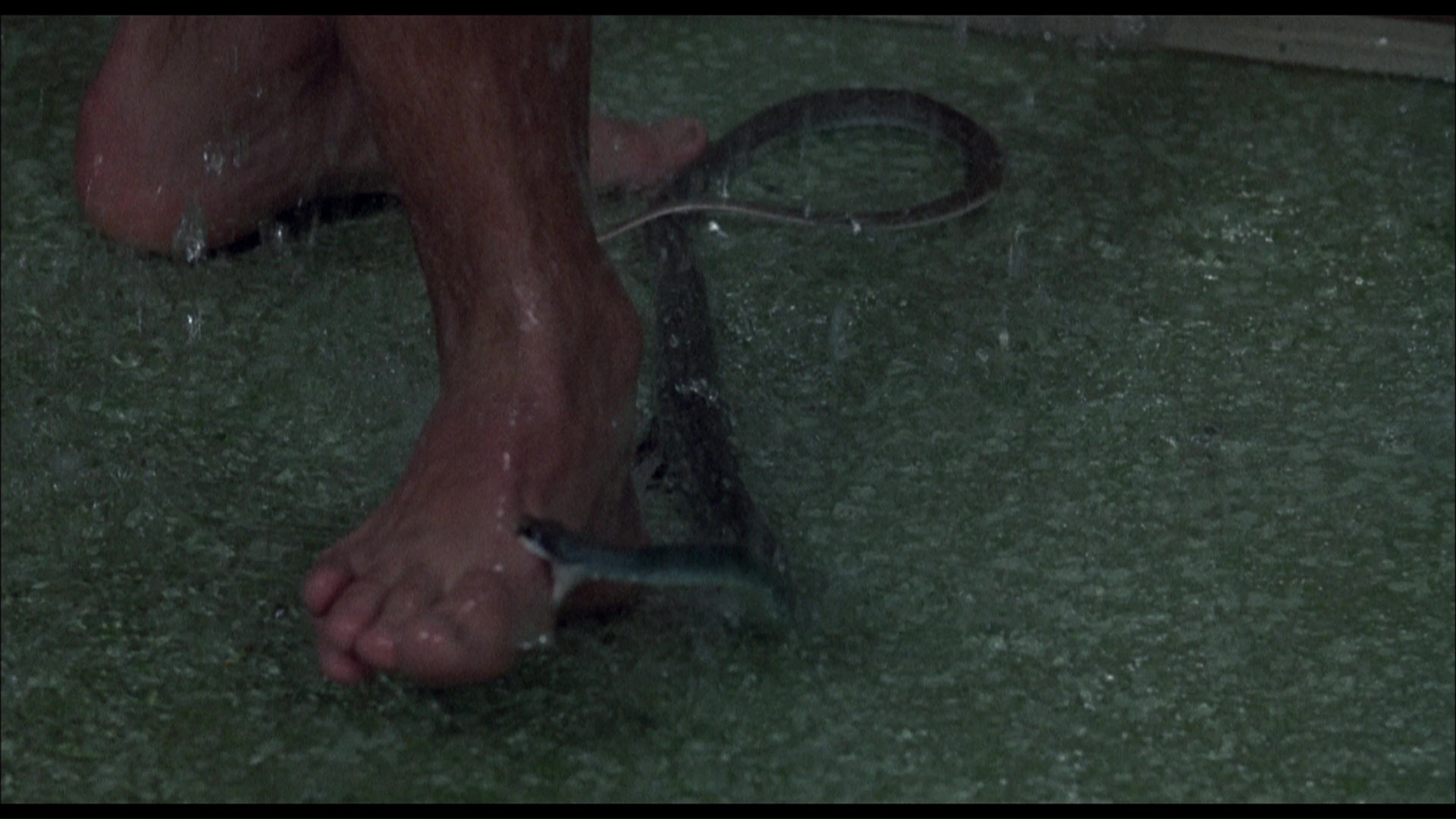 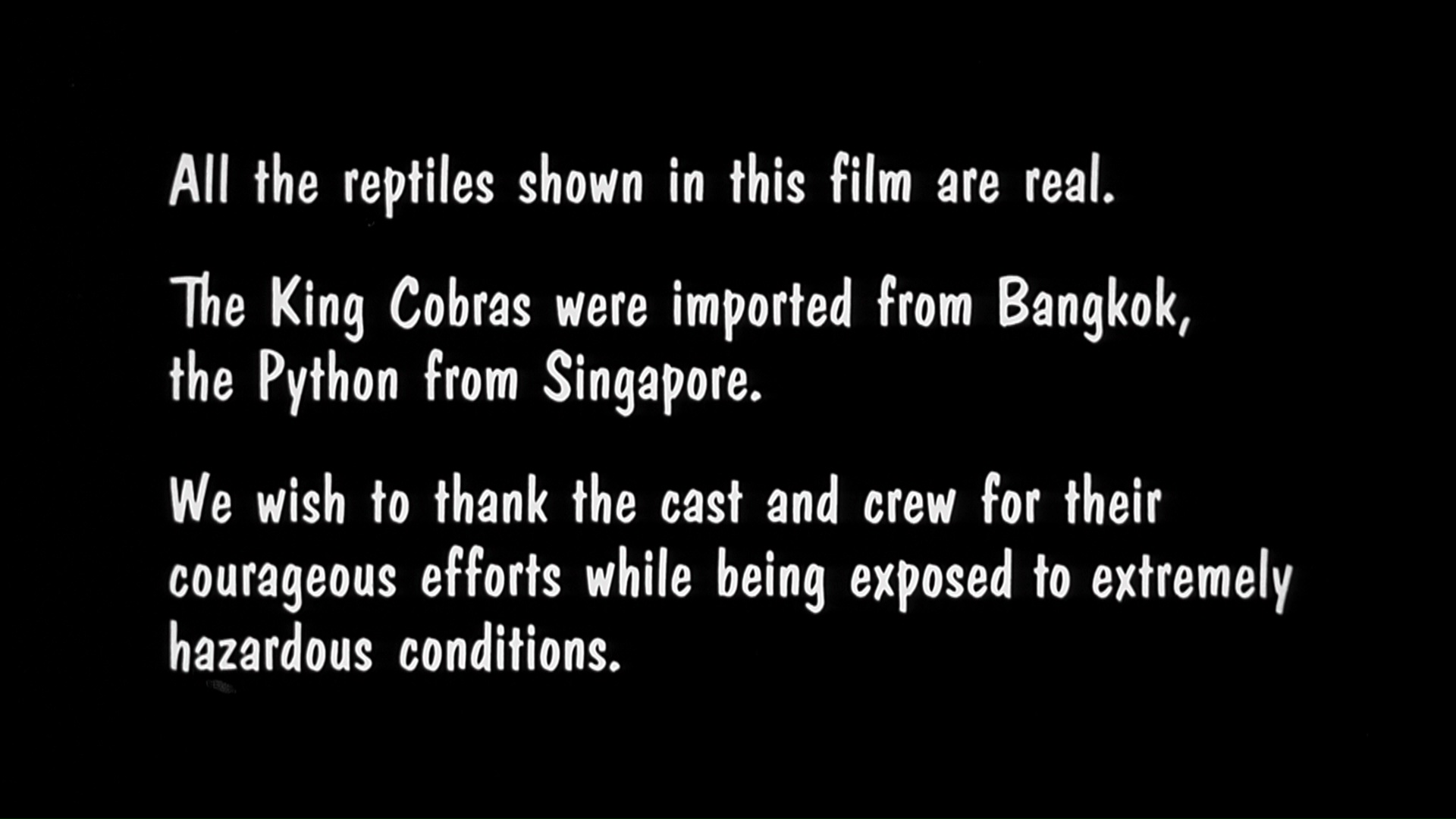 Arguably more famous as a tagline (“Don’t say it, hiss it!”) than an actual movie, this late night TV fixture earned a solid cult following in the late ‘70s and throughout the ‘80s after its run as part of the wave of animal amuck films that populated hardtops and drive-ins. (Think Frogs, Day of the Animals, etc…) This certainly wasn’t the first of the decade’s killer snake movies (Bill Grefé’s Stanley got there a year earlier), but it is one of the best of a small but memorable crop that also includes Jennifer, Rattlers, and Hong Kong’s far more extreme The Killer Snakes.

Innocent college student David Blake (Benedict) thinks he’s gotten a promising opportunity working in the lab of Dr. Carl Stone (Martin), who’s embarking on revolutionary studies involving reptiles – mainly snakes. David’s too distracted at first by the doc’s pretty daughter and collaborator, Kristina (Menzies), to catch on to the fact that the doc’s work entails some highly unorthodox methods, such as gradually turning people into monstrous king cobras. As the doc keeps injecting David with experimental inoculations (just a little hallucinogenic cobra venom here and some skin shedding there!), it’s clear that something very nasty is in store for our young hero. 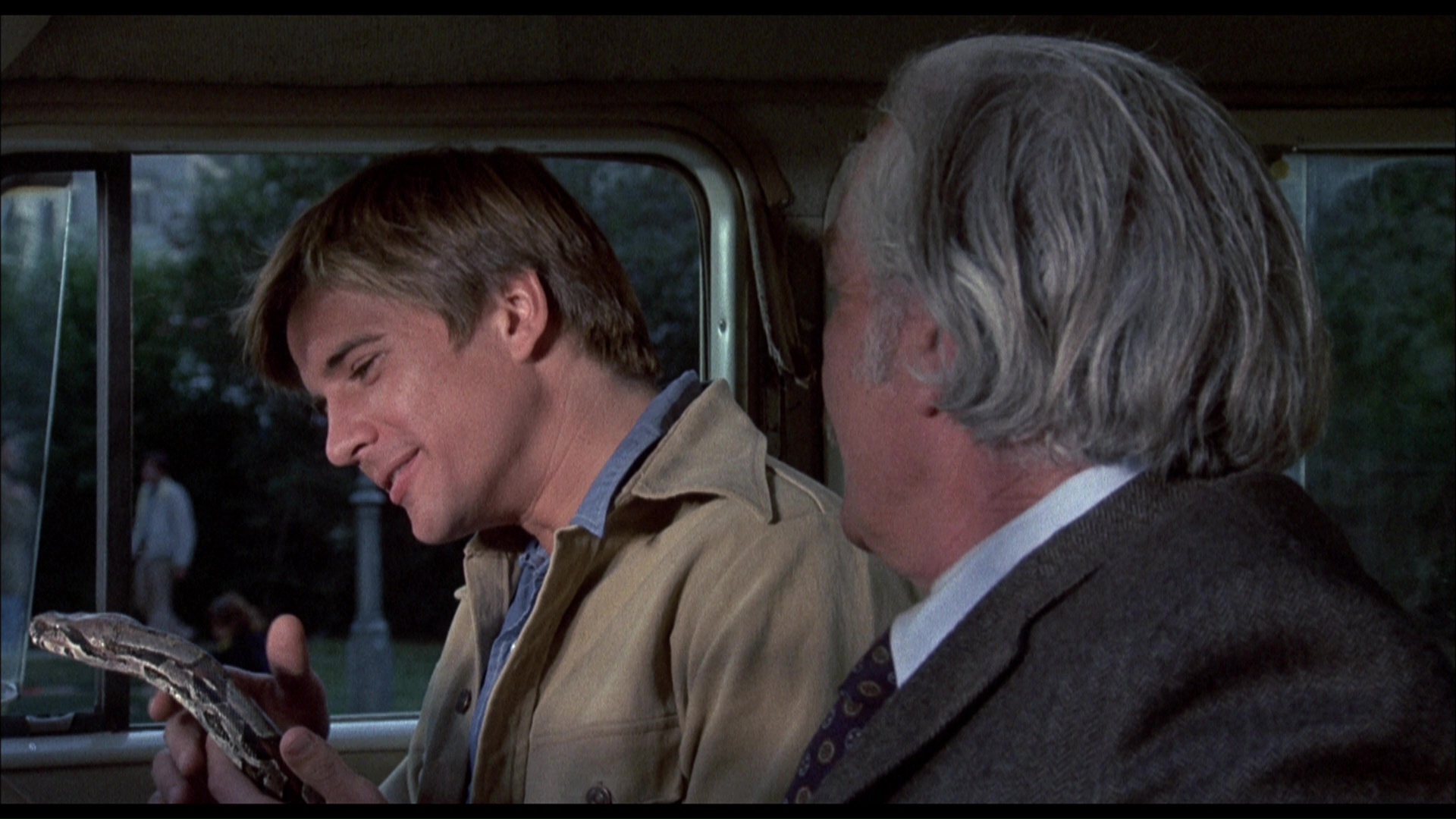 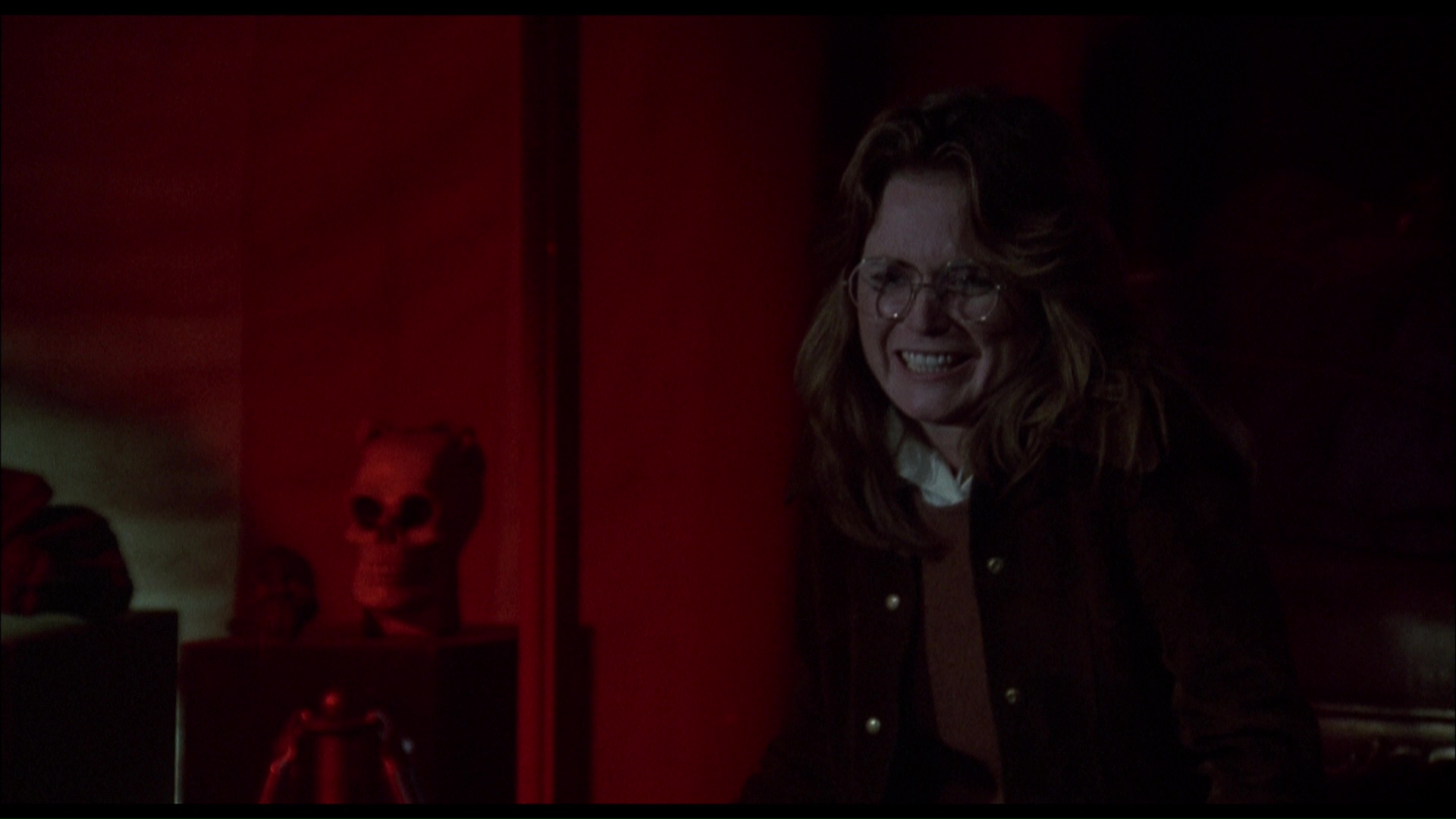 This film marked a rare big screen effort for director Bernard L. Kowalski, who mostly worked in episodic television and occasional made-for-TV movies like The Woman Hunter and the creepy Black Noon.  (In fact, this was only his fourth – and final – big screen effort after odd choices like Krakatoa: East of Java, Stiletto, and Macho Callahan.) His TV aesthetic is still in place here with mostly workmanlike visual setups, but  he also clearly revels in the chance to pelt the viewers with slithering snake imagery that would’ve been way too strong for TV viewers in ’73. Some amusing post-production censorship was imposed via optical leaves and a lamp to cover up some exposed skin during a skinny dipping scene and a post-coital scene, though it's far more careful to cover up Menzies than Benedict or a young Reb Brown (Yor) whose slo-mo shower attack is uncensored here compared to some past video and TV prints. Needless to say, a PG back then meant something completely different. It’s still fun to see a young Benedict here years before he became TV’s go-to cocky smartass in Battlestar Galactica and The A-Team, mostly looking sincere and confounded as he goes through some nasty transformations. The snake procedural aspect is really the film’s strongest suit as we get some great footage of the actors handling and researching snakes, including a startling real venom milking moment and lots of great close ups of the scaly stars in action. If you ever wanted to find out how to force feed a black mamba, look no further. And thankfully unlike some other nature horror films (looking at you, Food of the Gods), this one has the good sense to use a (very obvious) wooden stand-in for an animal getting pumped full of bullets, though there is a (not explicit) skirmish involving a mongoose at the climax that still had UK censors reaching for the scissors.

Universal ramped this one 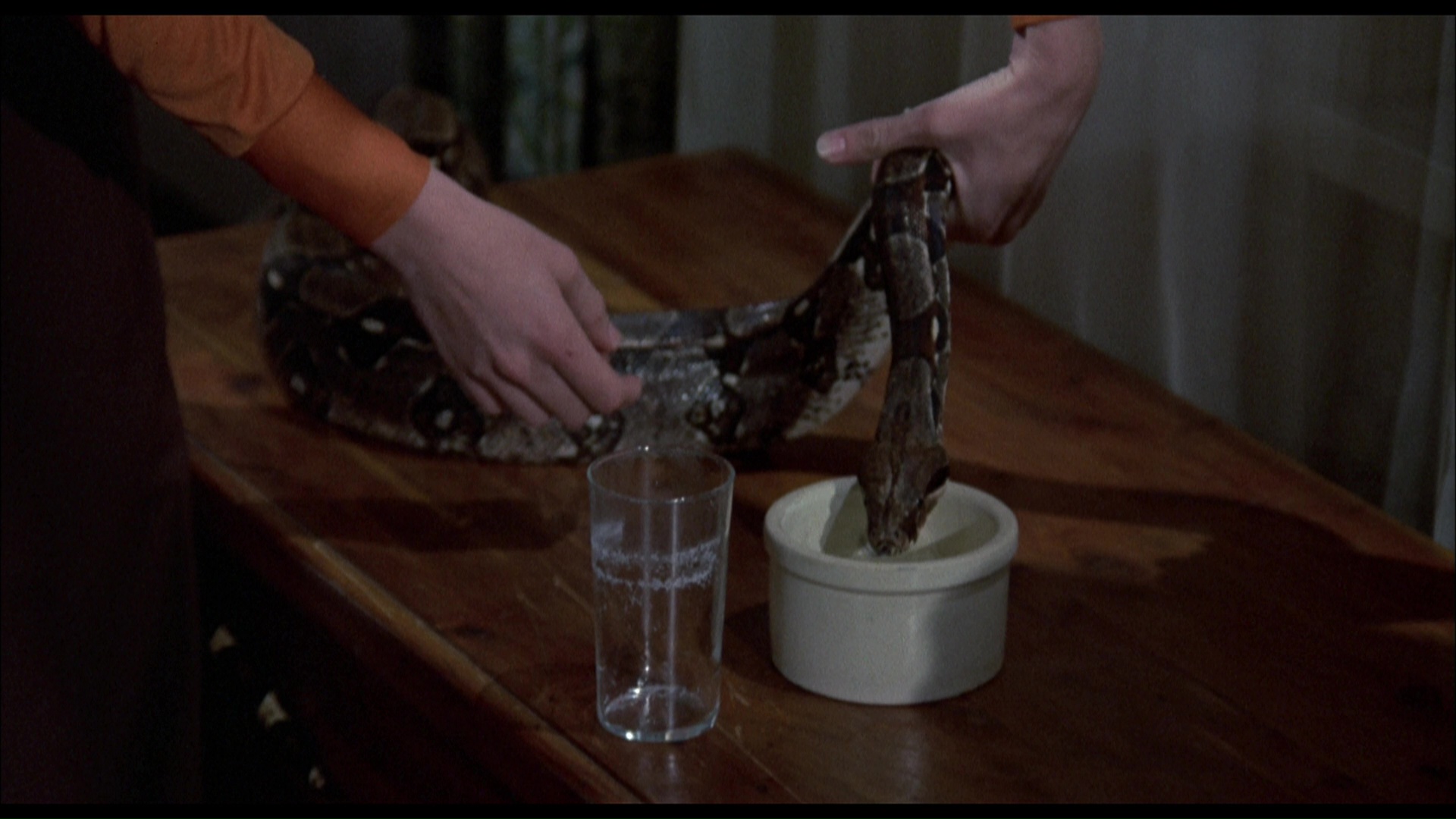 out as one of its last double features, paired up with the less bizarre but much-loved The Boy Who Cried Werewolf. For some reason it bypassed a legit American VHS release but did pop up on DVD in 2004, looking pretty nice with an anamorphic transfer and a theatrical trailer. However, fans will be far  better served by the 2016 Blu-ray release from Scream Factory, which sports a significantly upgraded HD transfer that vaults miles ahead in every technical aspect. Colors look great and well defined, the film 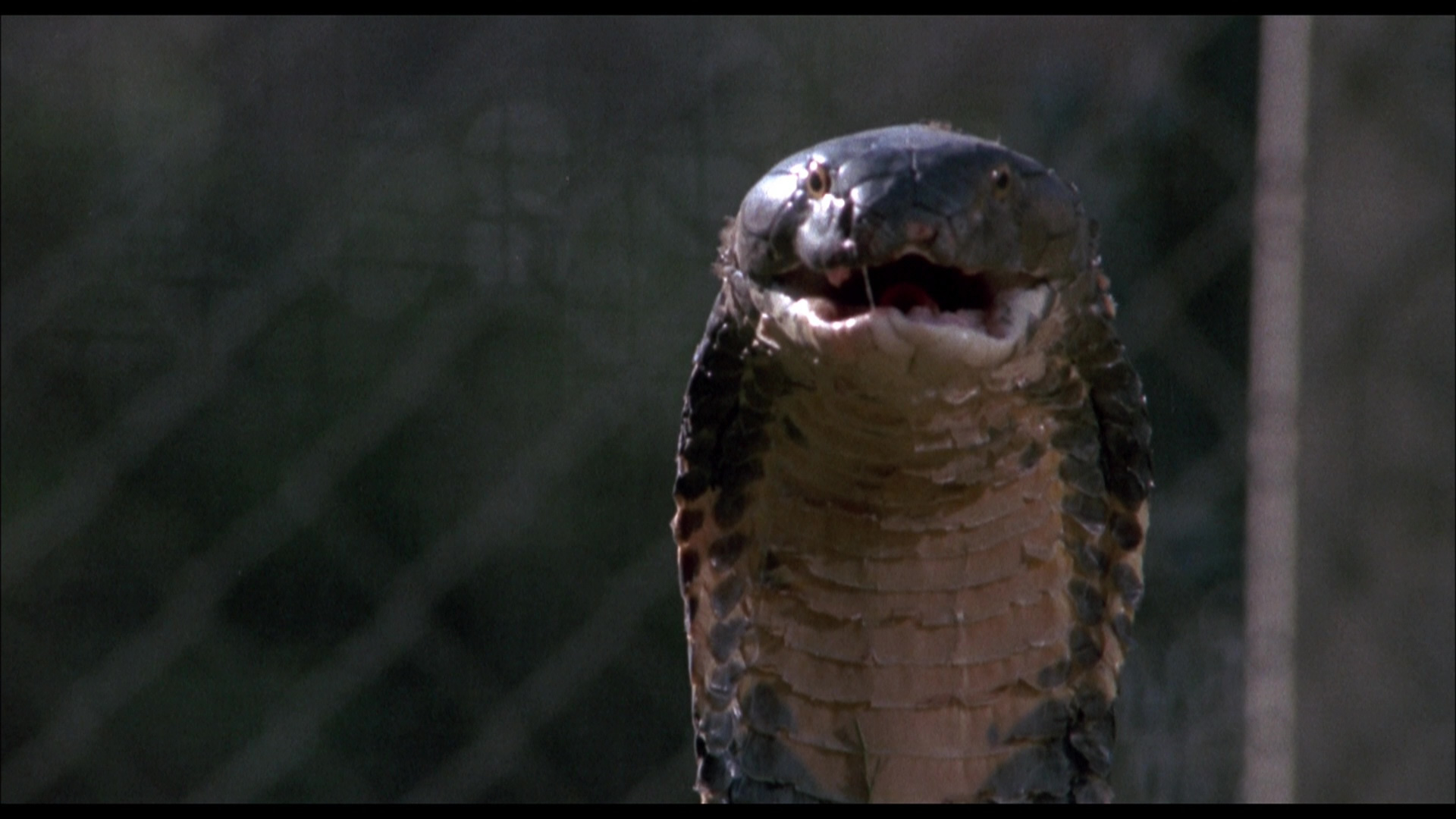 grain is fine and natural, and detail levels are impressive. Always nice to see a Universal catalog title looking this good, compared to the tragic likes of Tremors or  most of its John Hughes catalog. The DTS-HD two-channel mono track also sounds very good (with optional English subtitles), nicely serving the functional score by Patrick Williams (best known for penning the theme song for The Mary Tyler Moore Show and scoring films like Cuba, Used Cars, and All of Me). In addition to the U.S. trailer you get 90 seconds of crackly radio spots ("Look for your legs - they're gone!"), a German trailer, a very hefty gallery of promotional material and production stills (lots of actors getting smiley and cuddly with snakes), and most substantially, two new featurettes. The 17-minute “My Reptilian Past” features Benedict (still coming off quite a bit like Faceman courtesy of his cigar) recalling the undemanding nature of his character (he wanted to be a stage actor at the time) and getting this early gig with exec producer Richard Zanuck, who would soon do another, bigger Universal monster movie, Jaws. He also chats quite a bit about the arduous makeup process under the guidance of the legendary John Chambers, who had worked on Planet of the Apes and played a major part in the true story that would become Argo (in which he was played by John Goodman). Be warned that the audio on this one is unusually loud and has a weird stereo reverb effect, so keep your remote handy. The 15-minute  “The Herpetologist’s Daughter” features future Piranha star Menzies (now Menzies-Urich) chatting about her pleasant real experiences with her reptilian co-stars and her memories of Martin and Benedict, both of whom she got along with famously, as well as the more traditional nature of Universal Studios at the time and going on The Mike Douglas Show with a boa constrictor around her neck!