Thanks to television syndication from the '60s through the '80s, Mexican horror films have become recognized as the domain of wrestlers, campy monsters, and half-dressed women, often together within the same scene. Spiritism is an exception to that rule, instead providing riffs on the Val Lewton formula of atmospheric horror with a few nods to Jacques Tourneur's then-recent Curse of the Demon. Because the lurid thrills are confined mostly to the last half hour, this oddly effective little number has been largely forgotten but deserves a look.

A middle class Mexican couple finds their dinner party conversation going downhill when a psychic woman advises them that difficult times lie ahead for them. Upon returning home, the couple's son informs them that he needs to borrow the family's savings to kick off his private cropdusting business(!), at the suggestion of the son's manipulative fiancee. Naturally the venture quickly crashes and burns, leaving the mother (Carmelita Gonzalez) desperate to revive the family's sorry economic state. Her spiritual faith begins to dwindle when she turns to a psychic society for assistance and witnesses a bizarre display of ghostly visitations. Afterwards she is visited by a dark stranger, perhaps Satan himself, who offers a wooden box capable of granting a wish each time it is opened. After she makes a wish for money and opens the box to release a cloud of smoke, however, things go from bad to worse... and anyone who ever read "The Monkey's Paw" can probably guess what happens next. 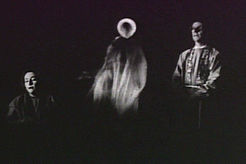 While the plotline is a standard bit of domestic hand-wringing, the fun of Spiritism lies in the incidentals. The psychic sequences, a lively episode involving a disembodied hand scuttling around the house, and the nightmarish finale goose up the film, essentially a patchwork of other horror efforts delivered with more gusto than expected. The moody black and white photography is a major asset, particularly after the overly talky opening half hour, and director Benito Alazraki (Curse of the Doll People) makes effective use of dark rooms and spatial relationships to generate tension where none should really exist.

As with most Mexican '60s titles, Spiritism was picked up by K. Gordon Murray, who dubbed and released it straight to American television courtesy of Trans-International Films. This domestic edition provides the source for Beverly Wilshire's DVD, which looks pretty rough but at least brings this obscure film to disc. Considering Spiritism has been nearly impossible to see for at least twenty years, a lackluster disc is still better than none at all. The video quality is messy, with distorted colors rippling through ever scene. (Turn off your TV's color control if possible.) The print displays some scratches and tears but remains watchable, though the contrasts are weak and washed out. As with several other Beverly Wilshire titles, the copy of the box was obviously written by someone who had no information about the film at all, and it makes for hilarious reading.