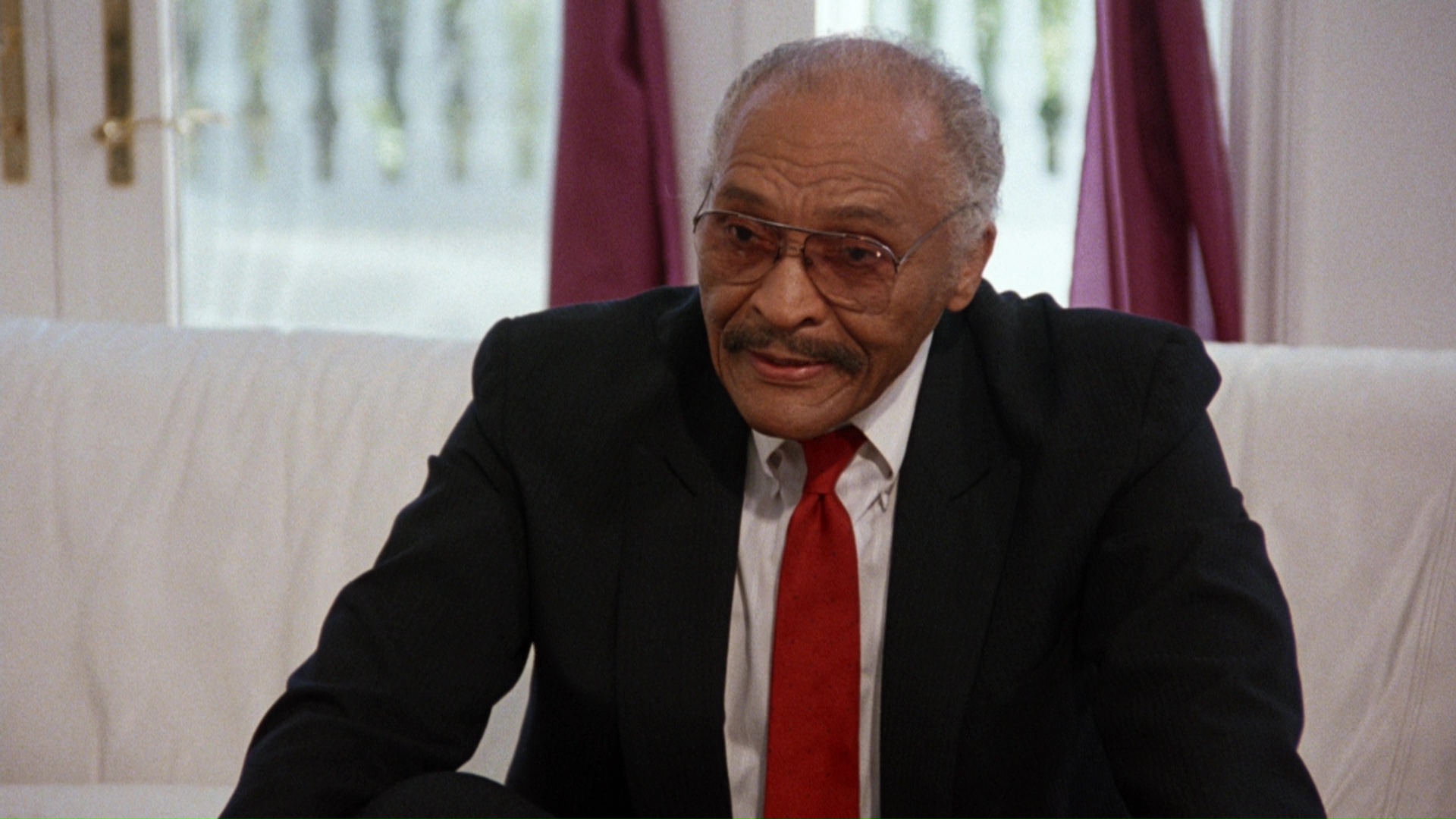 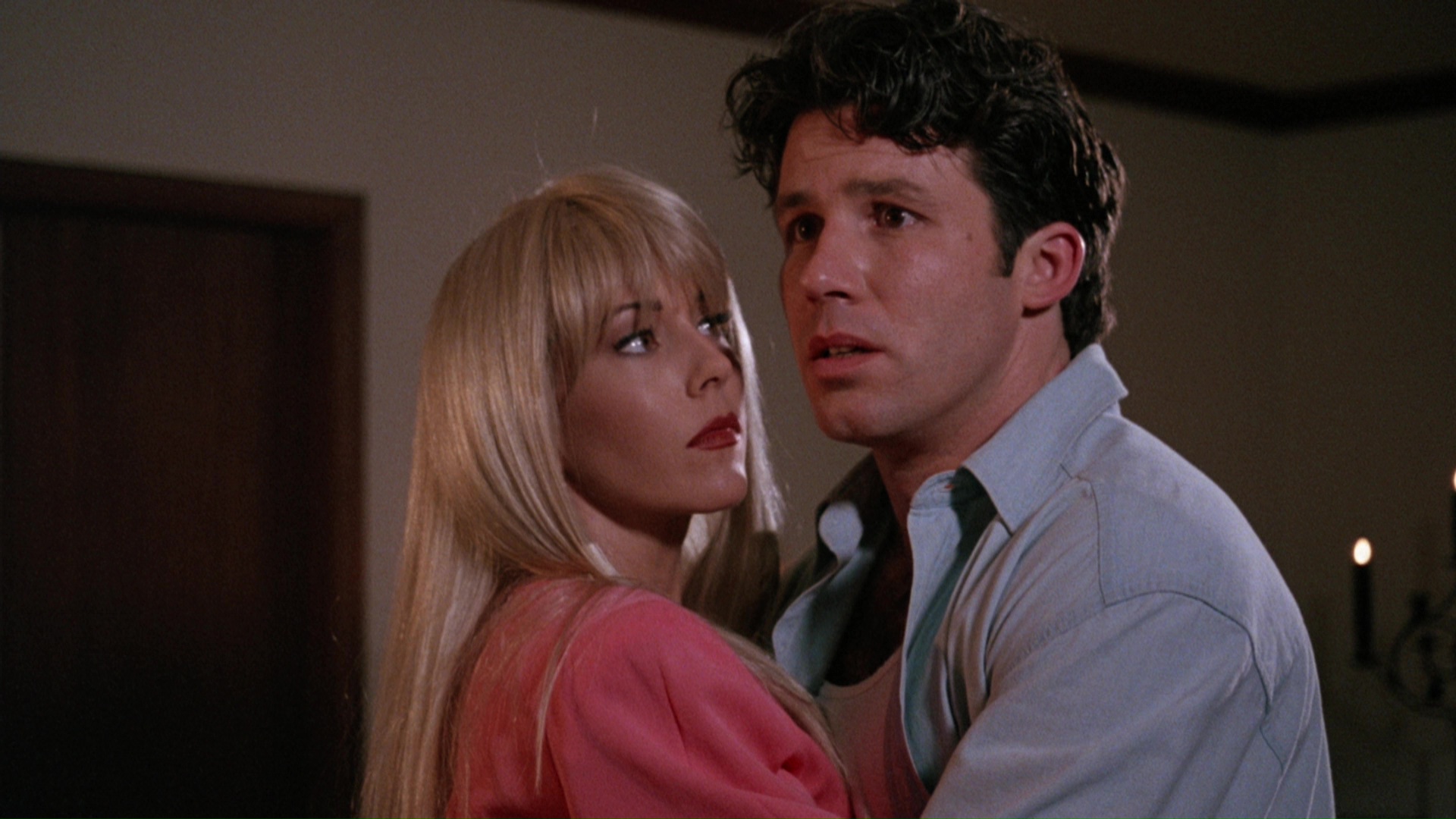 At the very start of his career, drive-in and direct-to-video specialist Jim Wynorski penned the screenplay for a very troubled fantasy film called Sorceress in 1982. Over a decade later he revisited the title and nothing else for a modern day supernatural shocker with a bizarre cast and enough T&A to make it appealing to the cable TV market. Actually, that's an understatement; in its uncensored form as presented on Synapse's Blu-ray and DVD edition, it's a flesh fest that goes about past what you would've seen on Cinemax at the time.

The main character in our torrid little tale is Larry (Poindexter), a lawyer who comes home one night to find his wife, Erica (Strain), in the midst of an oily naked ritual involving a dagger. This particular bit of business sends poor Harold (Albert) nearly crashing close to his death (since he got a promotion over Larry at work), much to the consternation of Harold's wife on the phone, Amelia (Blair). Apparently Larry was in love with sexy blonde Carol (Swanson) but has been tricked into a love spell by Erica, who ends up falling to her death during a tussle. Flash forward a bit and a ticked-off Amelia is a burgeoning witch in her own right and still married to Howard, who's stuck in a wheelchair. Meanwhile poor Larry's haunted by nonstop softcore visions of his past with Erica (including a surprise birthday tryst with her bisexual witch tutor played by Naples), which puts a damper on his current love life with a reunited Carol. Meanwhile their neighbor Stan (Parks) is in hot water as the primary suspect in his family's mass family killing, so trouble is clearly still brewing. Soon Melanie's flinging spells all 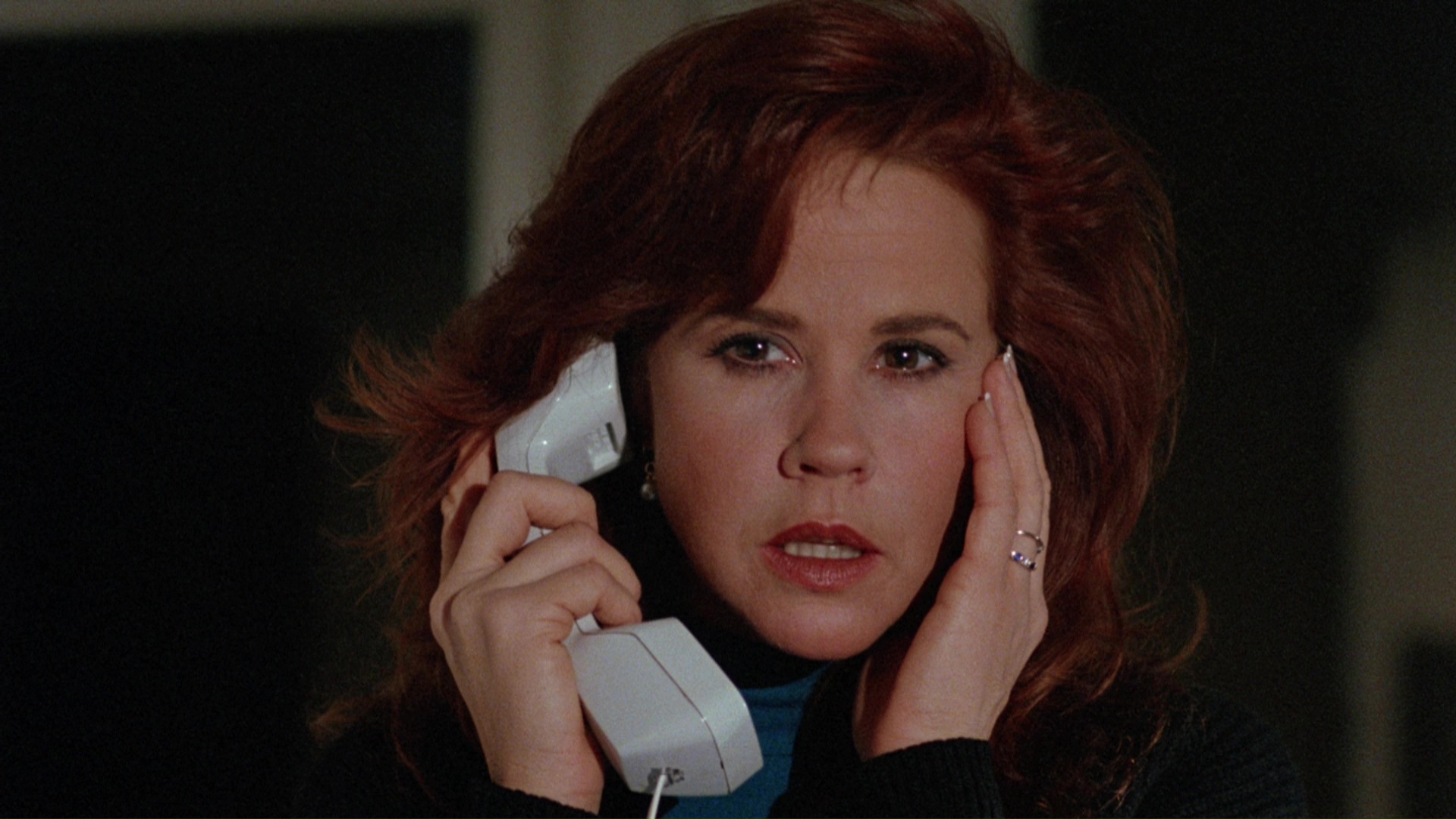 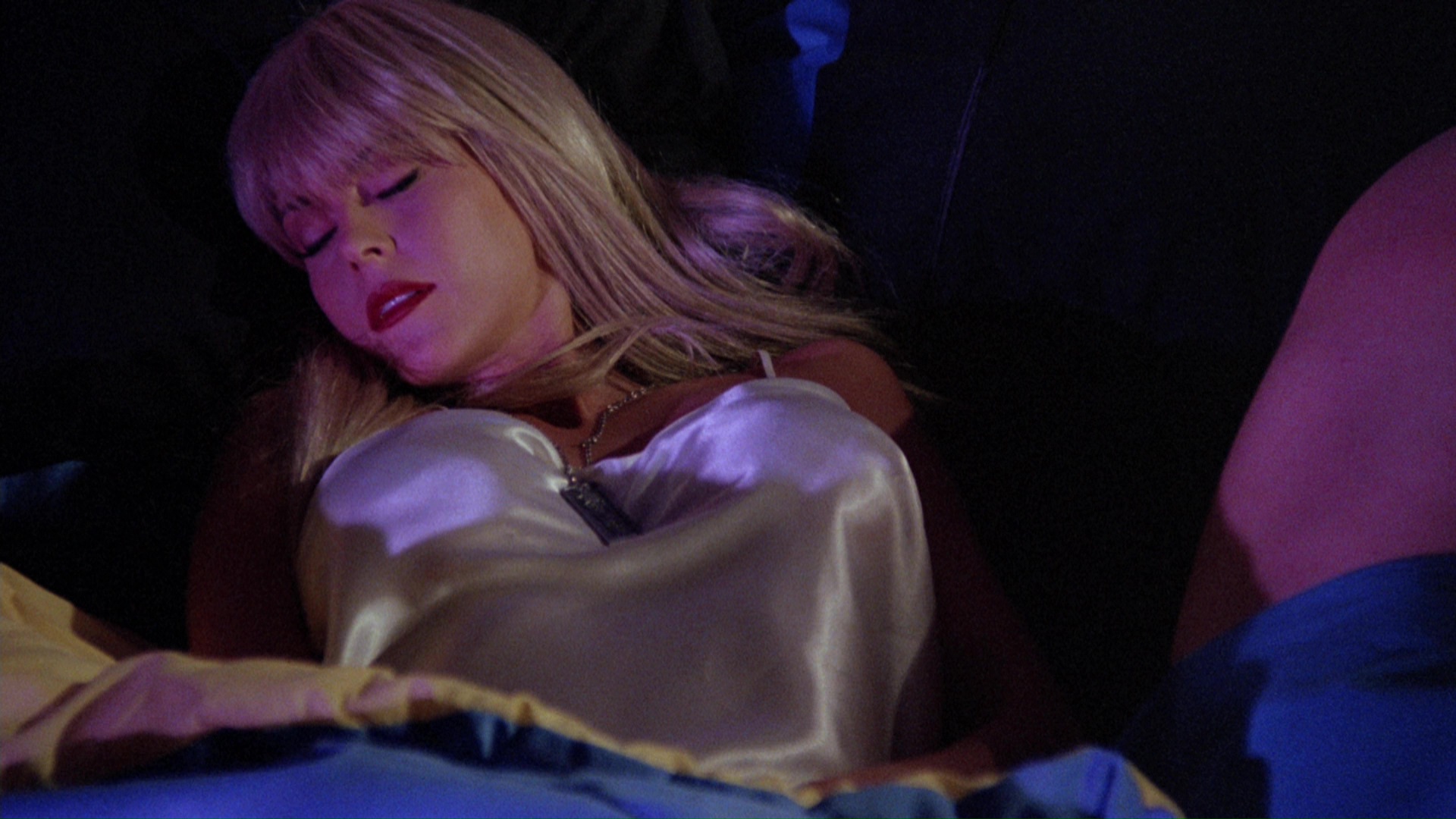 The actual plot of this film is a bit tangled and doesn't quite add up (especially Amelia's character, which leaves Blair wandering in and out of her secret witch room for motivations that never quite makes sense), but none of that really matters when the film throws in a sex scene every ten minutes or so. Old pros like Albert (who makes the most of a pretty thin part), Parks, and even Blacula himself, William Marshall (as Larry's boss), give it plenty of B-movie cred, while Penthouse Playmate Strain seizes your attention right off the bat and gives the film the highest bang for its buck, so to speak. Still a busy TV actor, the puppy-eyed Poindexter is a pretty solid leading man (despite his unintentionally hilarious pain noises during the climax) in a career that veered back and forth between mainstream roles and erotic VHS favorites like Night Eyes. You also get a pretty fun score that blends electronics and ethereal Morricone-inspired vocalizing courtesy of regular Wynorski composer Chuck Cirino, this time collaborating with Darryl Way. In fact this is a real drive-in bonanza behind the camera courtesy of producer Fred Olen Ray (who also has a small role on screen) and cinematographer Gary Graver, whose insane roster of horror, exploitation, and porn credits remains unrivaled. This film was actually shot under the title Temptress, the title on Synapse's print, but changed to Sorceress for its final release. Weirdly, a sequel with Strain was commissioned two years later called, yep, Sorceress II: The Temptress! In any case, the end result is a very mid-'90s slice of softcore supernatural hokum that delivers exactly what you'd expect, complete with a hoary twist ending that will either have you chuckling or tossing popcorn at the screen. 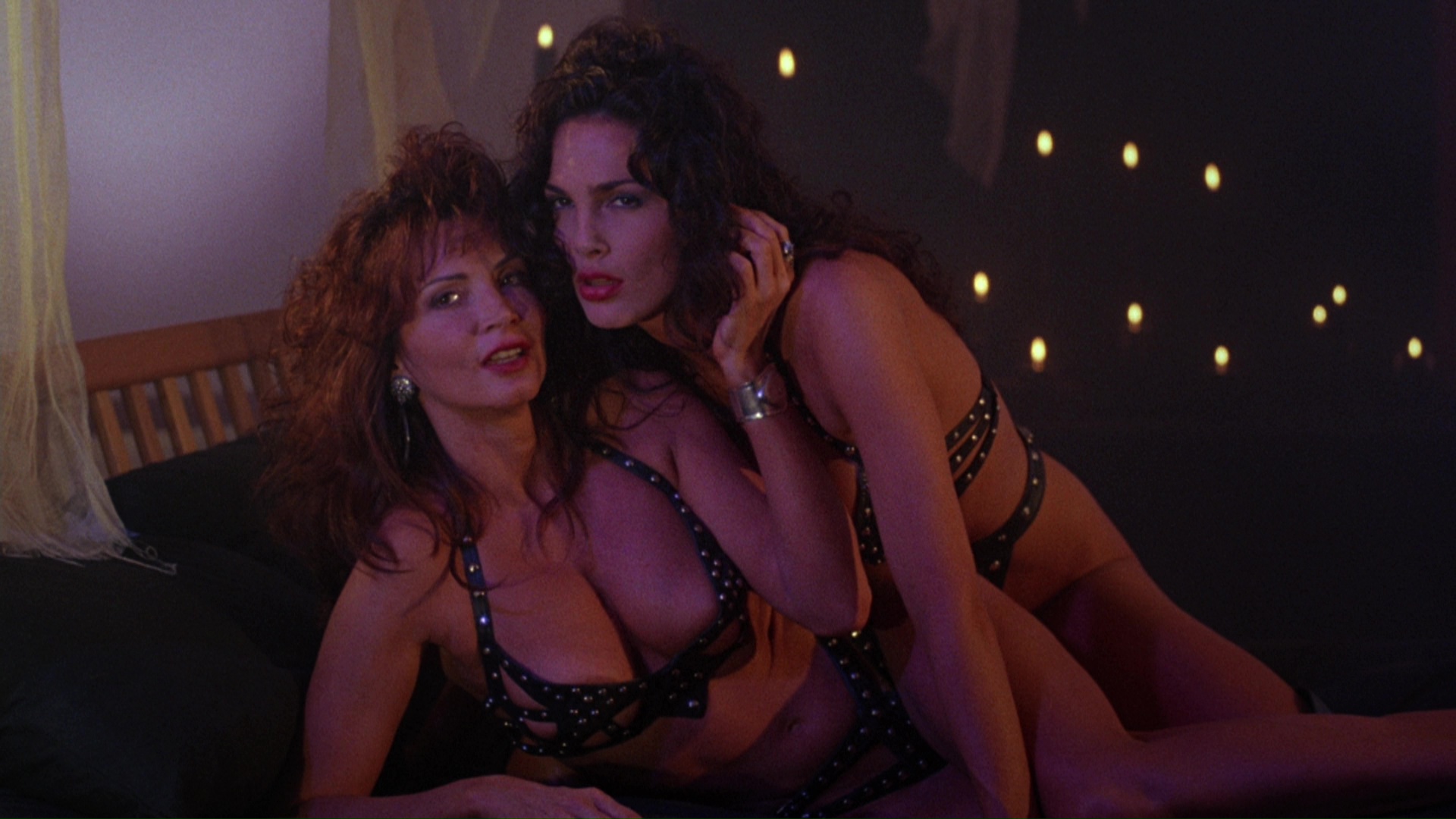 Multiple versions of this film were prepared for different markets, with a drastically edited (but still steamy) R-rated cut created for the VHS and TV venues. A longer unrated version also popped up on VHS from Triboro and popped up on DVD from 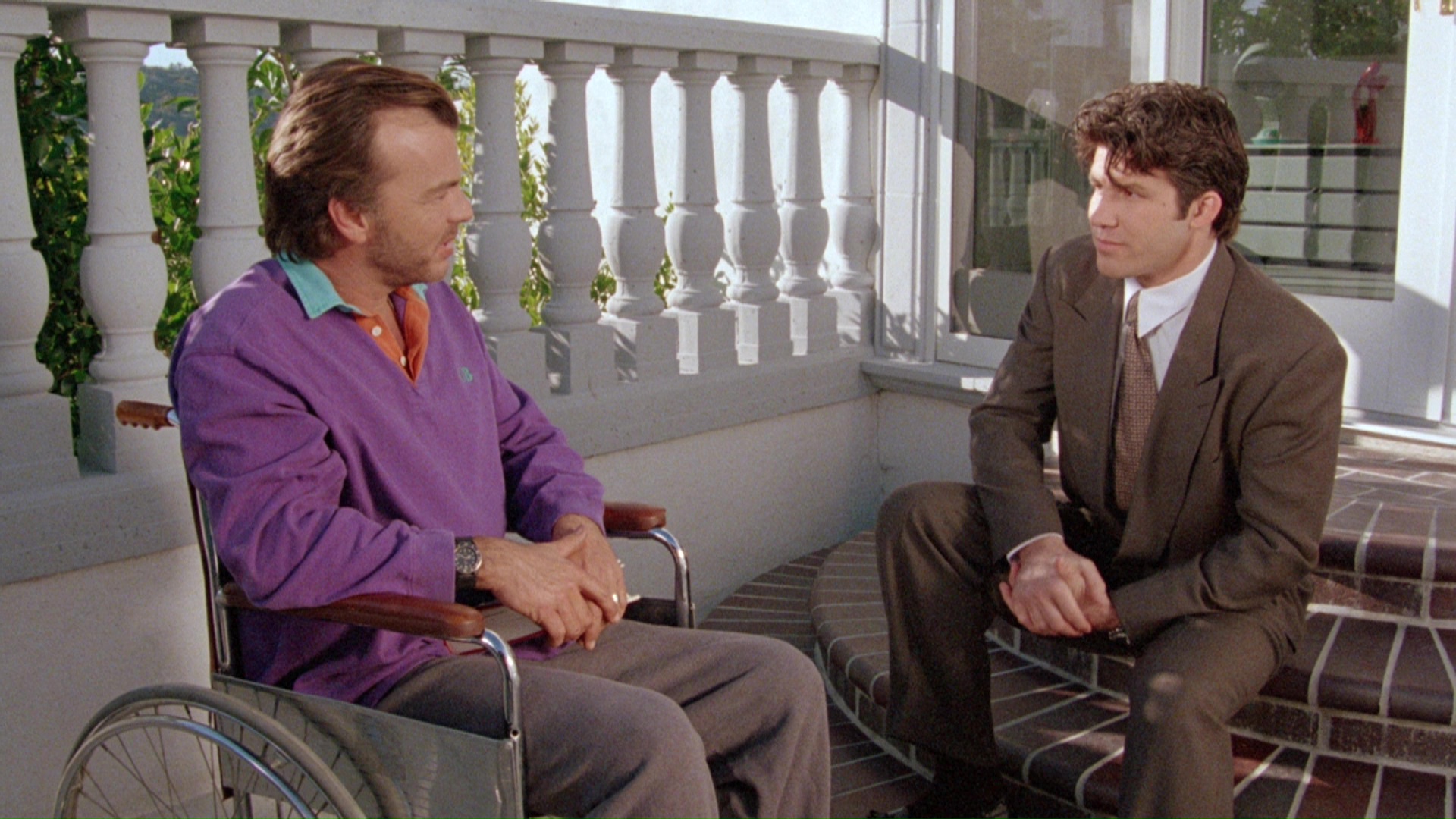 Image in the format's infancy in 1999, bearing an R rating but featuring the unrated VHS sex scenes. For some reason running times on tape releases have been printed as high as 93 to 95 minutes, but the unrated version actually clocks in at 89 minutes unless there's another weird padded cut floating around out there. The Synapse release (as separate Blu-ray and DVD editions) is billed as the "uncensored director approved edition" and is the most explicit one out there, including copious coverage of all of the actresses and the full version of what Wynorski terms the "tongue Olympics" during Larry and Carol's first big scene together. It's still 89 minutes but features extra slivers of shots trimmed from prior releases, including lingering full frontal Strain in the opening and some surprising flashes of Larry's poindexter in his big scene with Swanson. The image quality is colorful and moody, definitely shifting to the darker side compared to the brightened older transfers we've had since the '90s; presumably this is how Wynorski and company originally intended it to look. It's actually shocking to see how vibrant and lush the film looks compared to the anemic DVD, with plenty of flashy lavender and rose lighting turning up whenever something uncanny is in the air. The DTS-HD MA stereo audio sounds great with plenty of bass compared to the tinny earlier video versions, and optional English subtitles are provided. Extras include a pair of commentaries with Wynorski; the first is a solo one in which he goes into more technical detail about mounting the production, which was largely shot in Woodland Hills and marked his first of several with Swanson. Much looser and more entertaining is a second track in which he's joined by none other than horror effects legend Tom Savini, who has fun walking through the film with him and getting anecdotes on the actors (including the sweet-natured Marshall, who had trouble remembering his lines). You'll also find out why Savini doesn't own any porn and why there's no point worrying about continuity with candles when you're shooting a sex scene. Besides, how can you resist any commentary with exchanges like "Every time a woman comes on screen, you can see her boobs!" "Well, why not?! It's a story about erotic witches!"