The premiere festival showcase for fantastic cinema in North America, Fantasia has become the 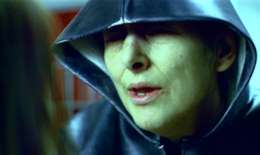 fertile ground from which a number of now-revered genre films and directors have grown. However, its dedication to the short film format has also seen some remarkable entries over the years, and these often neglected jewels get their chance to shine in Synapse's much-needed collection, Small Gauge Trauma. As the cover notes, these 13 shorts span eight countries with a wide varieties of styles and approaches, many of which will seem alien to fans who only cut their teeth on feature-length horror outings.

After a delightful intro by world cinema horror icon Coffin Joe (Jose Mojica Marins), the collection kicks off with "Abuelitos (Grandfathers)" from Paco Plaza (Second Name), offering a grim and very dark (literally and figuratively) tale of nasty doings to the residents (and their families) at a senior citizens home. The look and mood are rather similar to the work of Nacho Cerda, to give you some idea. The horror content ramps up considerably with Dennison Ramalho's "Amor So de Mae (Love from Mother Only)," a

Brazilian tale of a man's torn loyalties between his mother and his black magic-practicing girlfriend, with a truly harrowing finale lying in store in one of the strongest entries on the disc. The French "Chambre Jaune (Yellow Room)" from Helene Cattet and Bruno Forzani is far more experimental as it uses extreme close-ups and jarring editing to depict two female roommates' descent into nasty physical torture with a fixation on straight razors. Interesting but way out of joint with the rest of the films is the rather silly animated short, Benoit Boucher's "Flat-n-Fluffy," about two doofuses who accidentally kill their neighbor's dog and try to cover it up with disastrous results. More in keeping with the horror tone is the other animated entry, "Gorgonas (Gorgons)," about the horrific aftermath of a worldwide disaster in which the world's most popular rock group turns all of their viewers into stone. The closest thing to a standard feature production in tone and appearance is the Portuguese "I'll See You in My Dreams," a scope yarn about a man fending hordes of the undead... including some recent converts a little too close for comfort. Packed with haunting visuals and relentlessly exciting, it's a great showcase for director Miguel Angel Vivas and would make an ideal starting point for anyone starting this collection cold.

Next things get really strange with Guillaume Fortin's Canadian short, "Infini (Infinity)," a downbeat stream-of-consciousness piece in which a junkie's trauamtized memories on Super 8 film have an unexpected effect on their viewer. Then the long (39 minute) Japanese film "L'Ilya" from Tomoya Sato continues the nihilistic theme with the story of a string of suicides filmed by a video artist and integrated into her performance pieces for the public. Things get much, much shorter with another Japanese short,

Tenkwaku Naniwa's single-shot "Miss Greeny," a morbid bit of goofiness that must be seen to be believed. The Spanish "Ruta Destroy!" from Diego Abad doesn't have much to do with horror, but its frenetic mashing of extreme imagery with a musical sensibility shoud appeal to fans of bent fare like Wild Zero. Robert Morgan's stop-motion British short "The Separation" is a particularly dark bit of comic fantasy, as two Siamese twins find their separation far rockier than they imagined and try to cope with rather extreme measures. Then it's back to Britain again for the last two shorts, Philip John's quick-and-dirty "Sister Lulu" (about a novice nun who goes through various ordeals including being buried alive) and Sam Walker's incredibly gory and unsettling "Tea Break," in which an assembly line worker chugs along to his next break while sending human beings through the machinery.

The order of the 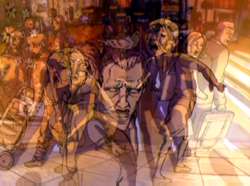 shorts listed above reflects their listing in the short film selection menu, though hitting "Play All" results in a random play effect that jumbles the order around a bit for variety. The shorts are presented in their original aspect ratios; most are 16x9 enhanced and look excellent, usually framed around 1.78:1 (with "I'll See You in My Dreams" the only 2.35:1 title), though a small handful are full frame. The Dolby Digital soundtrack reflects the nature of the source material, usually in stereo but sometimes mono depending on the film. English subtitles are optional for most of the foreign-language selections, though a couple are burned-in (presumably as in the original master). All of the shorts come with bios for the directors and, aside from two (the longest and shortest, oddly enough), sport audio commentaries by the filmmakers offering thumbnail sketches of the stories behind their films. Other extras include an excised scene from "The Separation," a music video by Moonspell for "I'll See You in My Dreams," and a making-of for "Gorgonas." Fantasia itself is represented as well with a brief additional intro by programmer Mitch Davis (Subconscious Cruelty), a Small Gauge Trauma trailer, TV spots, and a promo reel entitled "What Is Fantasia?," plus informative and enthusiastic liner notes by Davis. Certainly one of the most important DVD genre releases of the year (and historically one of the most vital you'll find anywhere), this is highly recommended even to the mildly skeptical.