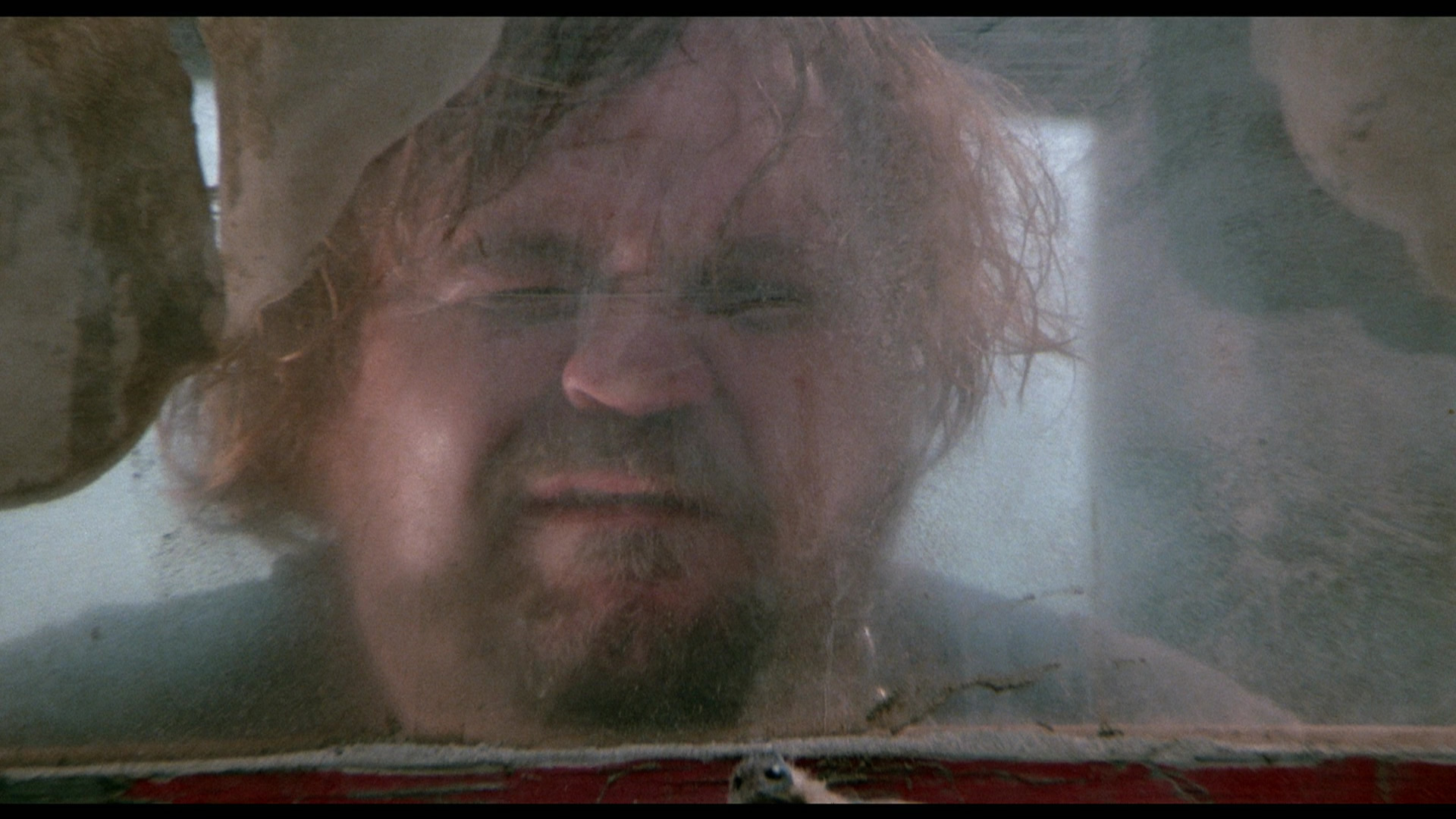 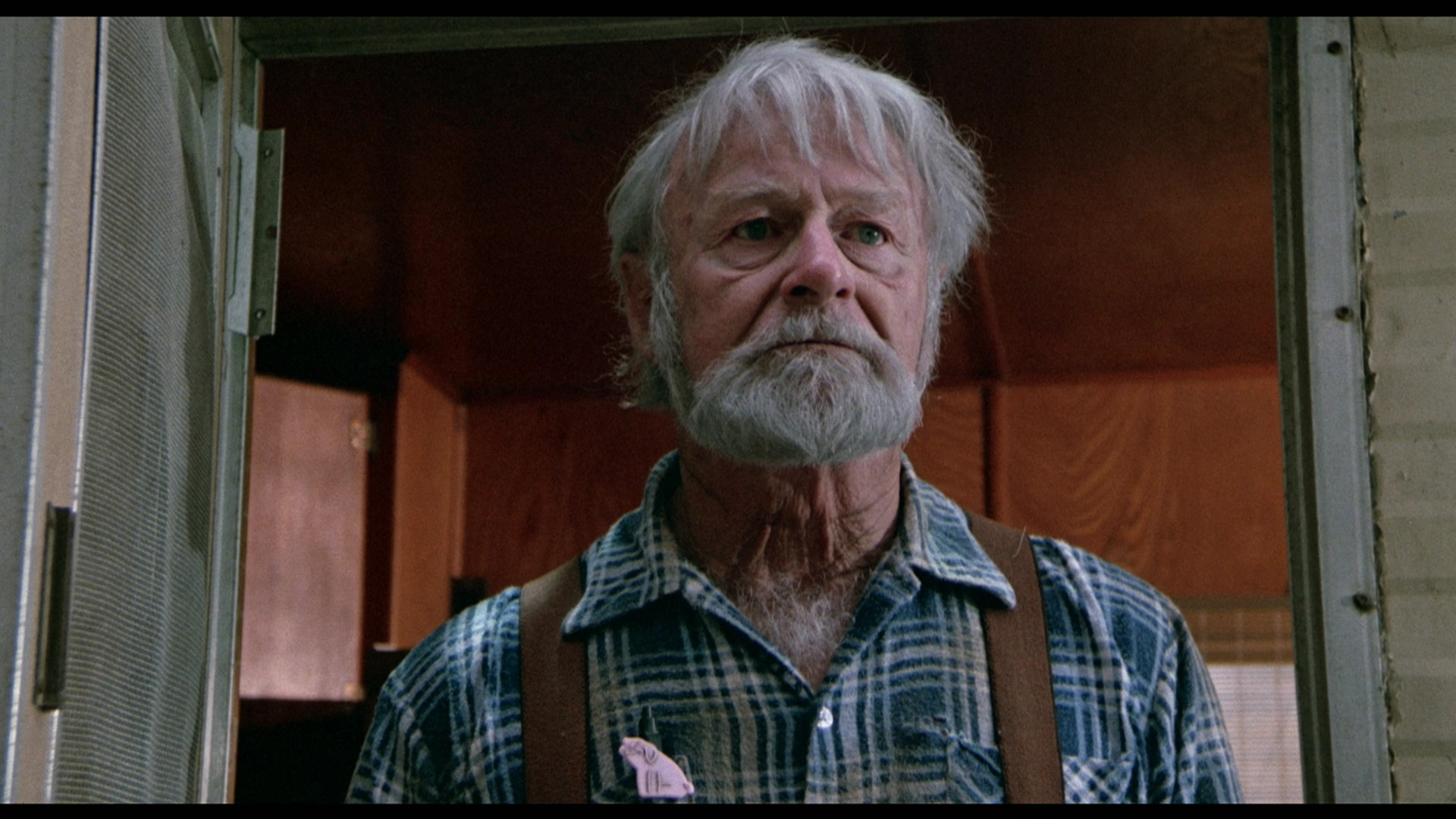 Made at the tail end of the slasher cycle, Slaughterhouse got a lot of fanzine and mainstream horror magazine coverage at the time as a spirited little indie shot around the San Diego area. One-shot director Rick Roessler and his gang decided to spice up the formula by setting it in the backwoods and lacing it with some heavy backwoods sick humor, resulting in a quirky cross between what some critics derisively called the "dead teenager" movie and the more rural offshoots like The Texas Chainsaw Massacre, Motel Hell, and even a bit of Pigs. Unfortunately the theatrical possibilities for films like this had all but dried up by the time it was time for a release, and it was eventually up to VHS for the film to find its cult following that remains pretty steady to this day.

Aging slaughterhouse owner Lester Bacon (Barrett) and his hefty son, Buddy (Barton), are united by blood, insanity, and prodigious facial hair. Buddy isn't the sharpest knife in the drawer, though he certainly knows how to wield one at work (which we get to see in the opening credits over non-explicit but pretty grim actual slaughterhouse footage that'll put you off bacon for a very long time). Lester refuses to go the mechanical route and faces foreclosure at the hands of a greedy competitor, so he decides to enlist Buddy to save the Bacon family business 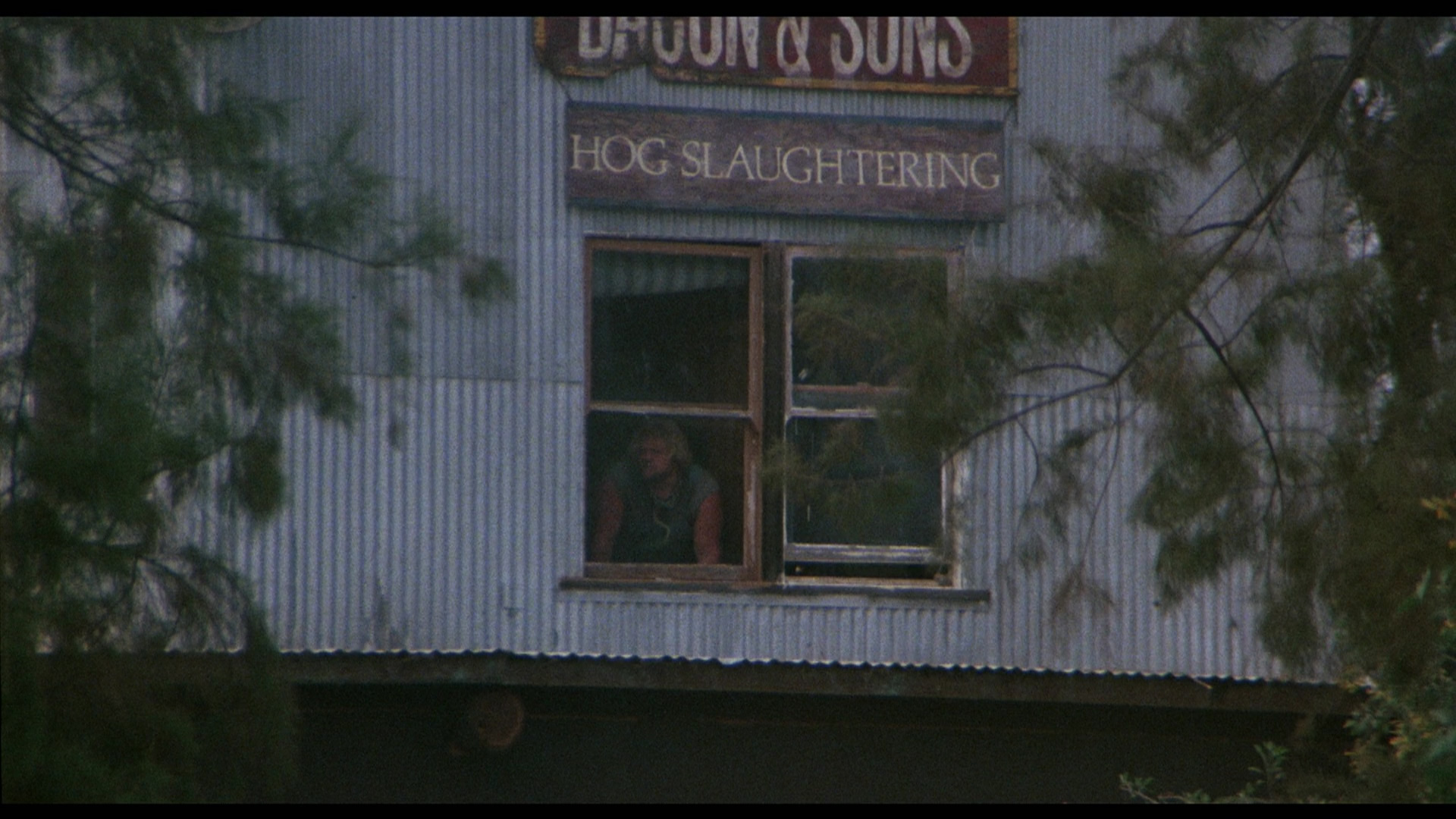 by burying his big cleaver in anyone who stands in their way. Meanwhile some hapless teenagers infiltrate the grounds to shoot a horror video and keep running into the local cops, but their luck turns very, very bad once they run afoul of Buddy and his work tools. 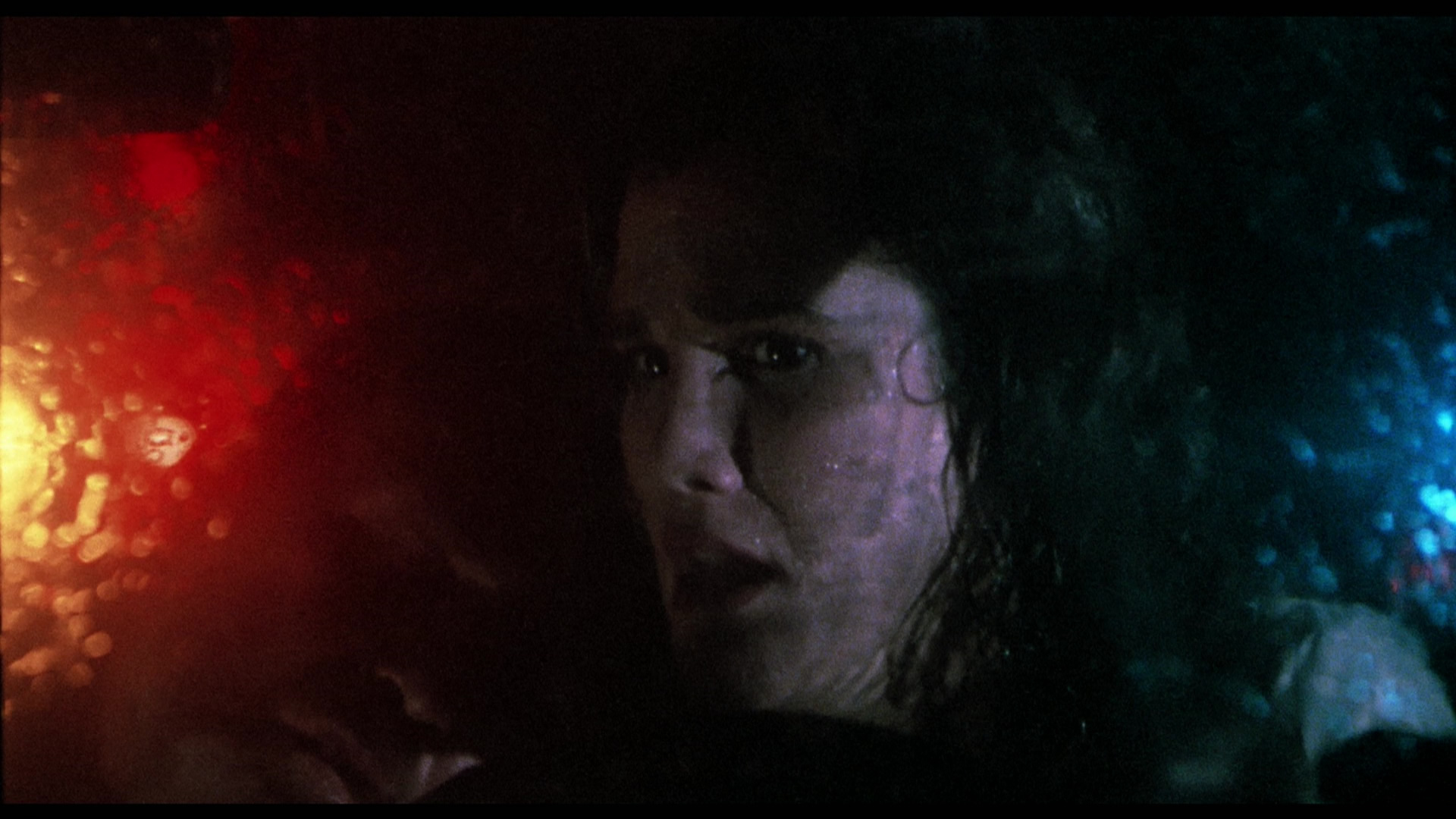 Complete with a catchy synthpop and rockabilly soundtrack (as well as some wildly inappropriate bouncy music over those main titles), Slaughterhouse is tonally all over the map but quite entertaining if you don't mind a horror film that seems to want to be five different things at once. Barton obviously gets the juiciest moments as the deranged but sometimes amusing Buddy, cutting an imposing figure at times as he chases the cast around at night and occasionally plays dress up, just because. The film isn't great art, nor does it try to be, but as far as bloody and disposable '80s horror goes, it definitely gets the job done.

Barely released in theaters by Manson International Pictures, Slaughterhouse got dumped to VHS by Charter Entertainment with a really drab, washed-out transfer that did the film no favors whatsoever. It wasn’t served any better years later when Program Power issued it on DVD via the short-lived Lucky 13 brand, yanked from a dated tape source and still close to unwatchable. At least it was a packed edition with plenty of extras: an amusing audio commentary by writer/director Rick Roessler, producer Jerry Encoe, and production designer Michael Scaglione, focusing a lot on the mostly fortuitous SoCal locations and the macabre gore effects; six samples of unedited footage from the shoot; a 15-minute making-of featurette with Roessler; a 10-minute Encoe guide to “Financing and Distribution of Independent Horror Films;” the 11-minute “Buddy Slaughters Georgetown U” featurette with the star running loose in character (and costume); a 13-minute “Buddy Slashes Washington D.C.” bit along the same lines; galleries of production s tills and promotional material; the theatrical trailer; a cute “no smoking” promo with the two leads; the trailer, teaser, and four TV spots; and DVD-Rom pdfs of the script, budget paperwork, ads, reviews, and other odds ‘n’ ends. 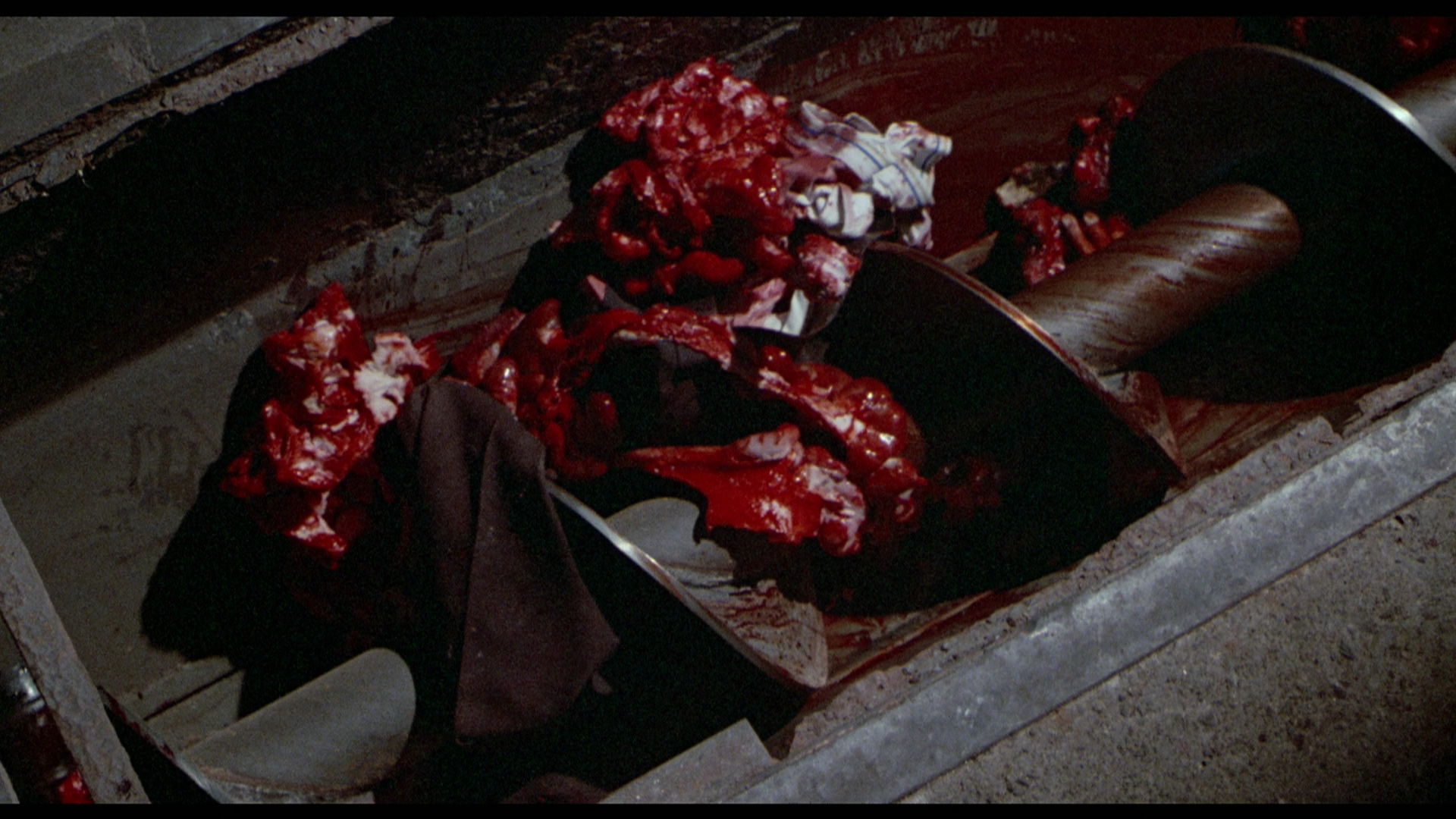 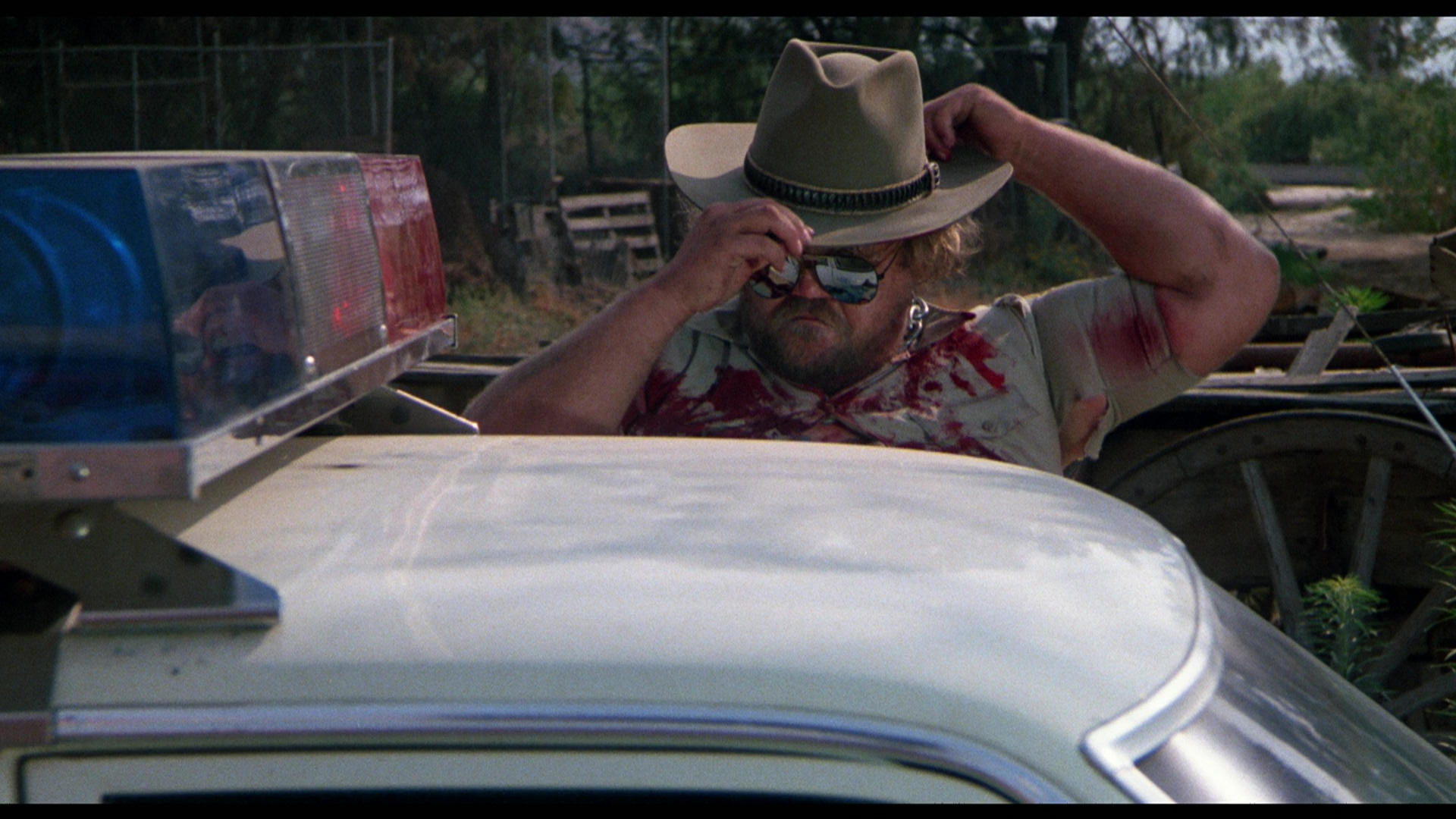 Hopes ran high in early 2015 when 88 Films announced a Blu-ray release as part of its Slasher Classics Collection, and it did mark an improvement of sorts with a grungy but more detailed and colorful but very dark transfer that at least had a semblance of competent cinematography at last. Extras on that release include a different and somewhat more subdued audio commentary by Roessler and Encoe, the older video pieces with both men, 11 minutes of VHS footage from the shoot, a pretty wild 25-minute promotional featurette(?) called “Buddy Meets the Public” with Barton promoting the film in random locations basically gluing together what was separate on the DVD, a trailer, TV spots, the no smoking promo, and a bunch of extra Full Moon trailers for good measure.

The early 2017 edition of Slaughterhouse from Vinegar Syndrome is a different beast entirely, a dual-format Blu-ray and DVD edition with a completely different 2K scan said to be from a 35mm interpositive.  The difference is very obvious here as the film boasts far more vibrant and saturated colors than before as well as a much slicker and more professional look overall, with the long night scenes in particular benefiting from depth and detail we’ve never seen on home video (or a theatrical print) before. In addition to the brighter and sharper appearance, the film also features more horizontal info on the sides and feels far better framed. In short, it looks superb and truly feels like a different movie. For a comparison, check out frame grabs from the UK Blu-ray here and here compared to the Vinegar Syndrome ones seen above. Also significant is the first video presentation of the film’s original Ultra Stereo mix, which was mixed down to mono for every prior release; it sounds pretty great here as a DTS-HD MA 5.1 option with lots of great crashing storm sound effects and the modest score getting some nice channel separation in particular 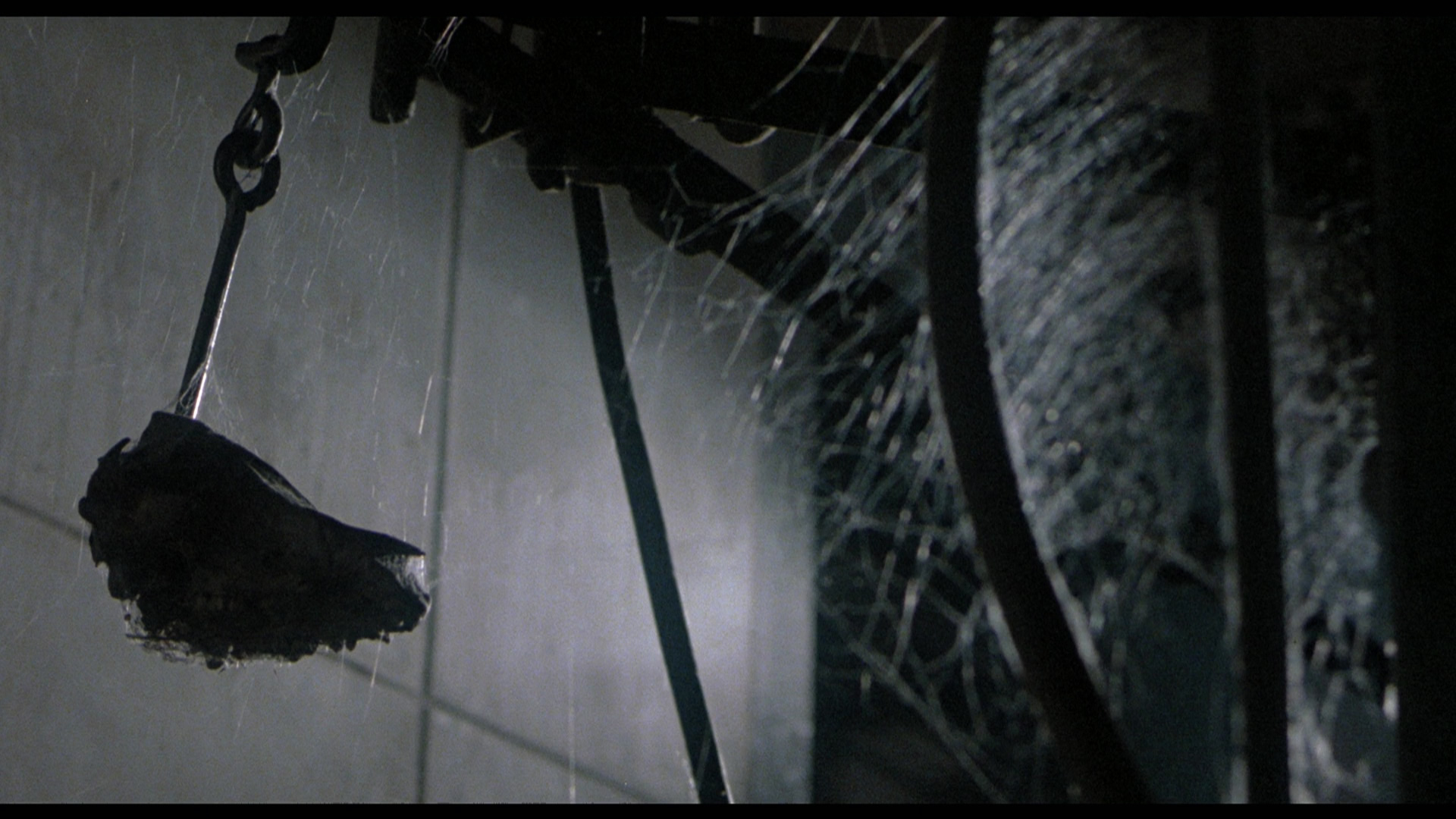 without anything too showy going on. (A 2.0 track is included as well.) Optional English SDH subtitles are also included. 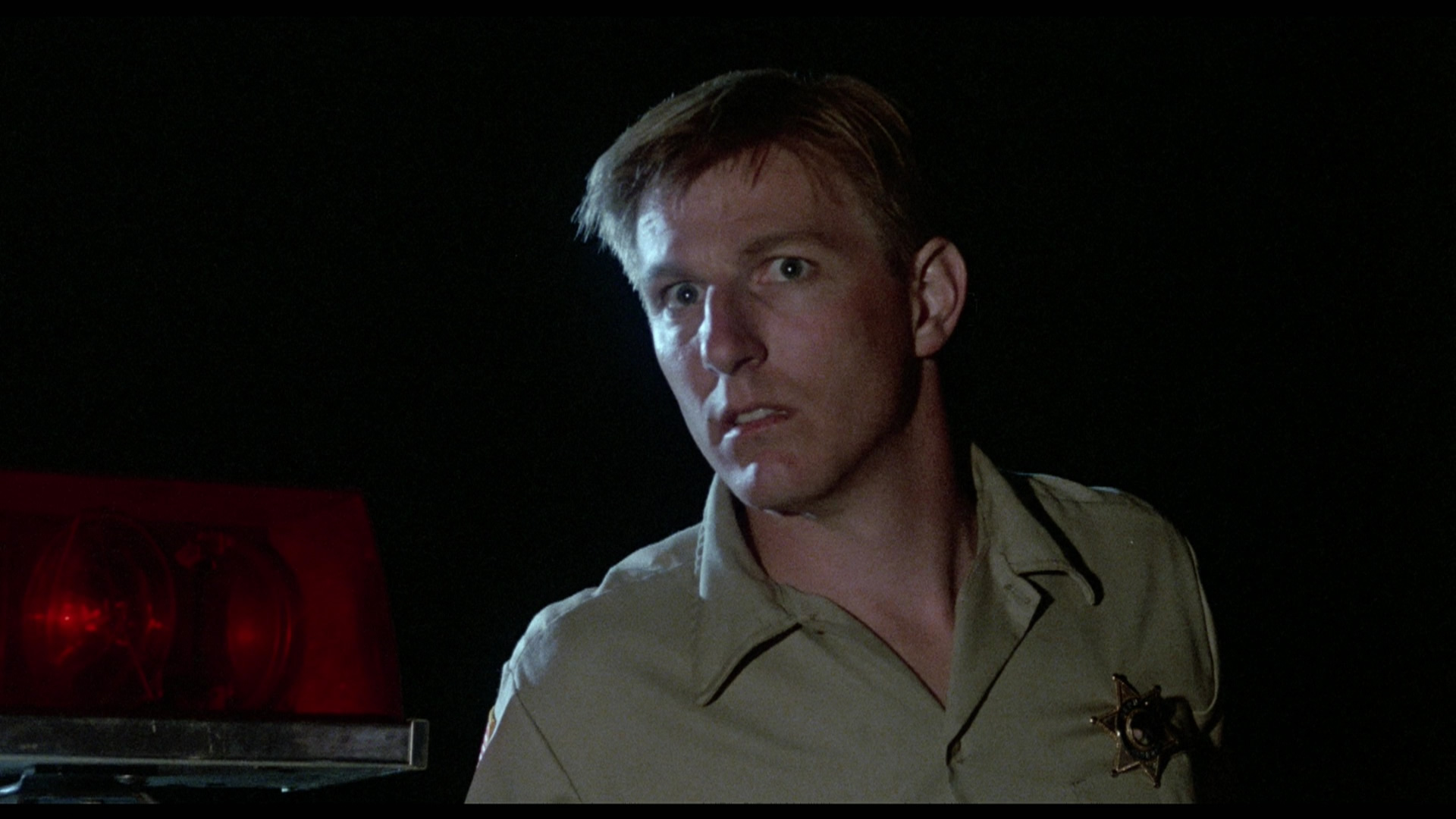 Many of the preexisting extras from the DVD have been resurrected here including the audio commentary, Roessler and Encoe interviews,  and no smoking spot along with the trailer (plus an alternate one tagged on) and TV spots, but there’s a solid amount of new material as well. A 10-minute interview with Sherry (Berndorf) Leigh reveals the emotional tragedy that she used for the finale and how she got the part,  while the 28-minute "Making a Low Budget Indie" has a very enthusiastic Roessler waxing nostalgic about the film three decades later in front of a little waterfall and giving a tour through this “horror film with a plot” scrapped together with a feisty crew willing to pull together on cold nights to make their dream come true. The 5-minute “Producing Slaughterhouse” with Encoe is basically a quicker, streamlined variation on his older featurette as he chats about being Navy buddies with the director and putting the film together for a mere $110,000. A 1-minute "Epilogue: 30 Years After the Slaughterhouse" features radio voice over with an FBI interview functions as a kind of postscript to the story with a “facial recognition program” revealing the silly fate of one key character, while a 5-minute archival radio interview from 1987 features a chuckling Barton extolling the virtues of being scared. A 4-minute “10 News Weekend Report” has some footage of the audience and filmmakers chatting about the film outside of its San Diego premiere (“We went to see some gore, and we got it!”), and an expanded 20-minute “Behind the Scenes” featurette compiles a ton of raw footage including lots of conveyer belt mayhem and some hilarious silent “Pig Out” dancing. Finally you get a 3-minute reel of goofy outtakes, three radio spots, a 12-minute handwritten shooting script gallery, and reversible cover options that basically swap the tagline from one place to another. Pig out!