WALLS IN THE CITY

Jim Sikora really knows Chicago. In particular, he knows the bars of Chicago: the acrid, clinging residue of cigarette smoke, the diffused light that shifts directions from day to night. In his first film, the lowlife triptych Walls in the City, people venture out of bars now and then, but the atmosphere still clings over the proceedings like a shroud. Not 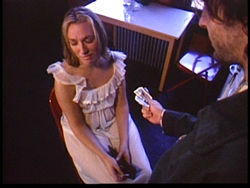 surprisingly, the middle story is adapted from Charles Bukowski's "Reunion," while the other two could easily pass for translations of that famous barfly's work as well. Though not as interesting or satisfying as Barrel's companion Sikora release, Bullet on a Wire, this does make for appropriate follow-up viewing.

In the first story, "Fly on the Wall," self-professed happy amnesiac Ed (Jesus Lizard's David Yow) hooks up with larcenous Regina (Killen), who takes him home for a night of half-conscious double-crossing followed by an unpleasant twist of fate. "Love, After the Walls Close In" (the Bukowski adaptation) charts the volatile relationship of recent parolee Harry (Tony Fitzpatrick) and his beloved Madge (Killen), who professes to love him deeply and to have never slept with another man - despite the fact that he smacks her around, calls her nasty names, and cons everyone in sight. The most striking of the trio is "One Time She Played the B-Side," in which businesswoman Virginia (Killen) decides to spend a long lunch hour at a nearby dive and, while talking to cheerful stranger Charly (Bill Cusack, brother 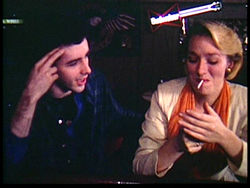 of John and Joan), envisions a tormented relationship in which the two burst into a violent fight over five dollars.

Deliberately grainy and fuzzy-looking, Walls in the City plays more like three short films strung together than a linear feature; even on those terms, its narrative flow is tenuous at best. Mood is the entire game here, and Sikora keeps the film juiced with a succession of eerie images and jarring transitions, such as the cartoony shift between Virginia's fantasy and reality in the last story. Obviously Killen is the main attraction, acting-wise, as she portrays three very different women in what must have been an enjoyable thespian exercise; however, the show is nearly stolen by Fitzpatrick giving one of the best louse performances in indie movie history (along with delivering one of the most unflattering nude scenes ever shot). Yow doesn't get much to do here (though that was rectified with Bullet on a Wire), but Cusack >has some nice moments as well despite the spotlight shining mostly on Killen for the last tale.

To compensate for the skimpy running time, Barrel's DVD comes with a nice array of extras. Sikora turns up for a commentary track in which he discusses the piecemeal production of the film and his approach with actors, while the director's shorter form work can be seen in a fascinating sampler. The hilarious and gruesome "Bring Me the Head of Geraldo Rivera" comes first, following by the chatty and humorous "My Charbroiled Burger with Brewer," the utterly bizarre "Stagefright Chameleon" (which marries hardcore porn with clips from Robot Monster!), and "X-mass '73," along with the Tar music video "Les Paul Worries," also helmed by Sikora.

BULLET ON A WIRE

Though the packaging for Bullet on a Wire positions it as yet another neo-film noir effort, this grungy, black and white character study actually doesn't fit the category at all. More in line with deadpan, indie filmmakers like Hal Hartley and Jim Jarmusch but with a stronger focus on crime and the quirks of fate than witty dialogue, this Chicago-lensed sleeper is an oddball, effectively skewed look at how one person's nastier instincts can lead to seemingly endless repurcussions.

The instigator of this story is Raymond (Strong), a bald and socially maladjusted telephone salesman with a habit of committing

impulsive acts which he later denies. One of the more damaging of these involves calling the mother of young Tanya (Phillips), who recently visited his sister's clinic for a pregnancy and STD screening, and informing her (incorrectly) that she's HIV positive. Things go horribly wrong when Tanya's panic causes her to shoot her brutish stepfather, landing her in the slammer amidst a minor media circus. Raymond's self-denial leads to problems with sister Norma (Paula Killen), exacerbated by his inability to keep his hands off the phone, while Tanya's opportunistic brother, Ed (David Yow), decides to twist the situation to his own advantage as well.

Featuring plenty of strange visual tricks, DIY-style smoky cinematography with an emphasis on sprawling prison spaces and smoky bars, and a bizarre soundtrack obviously designed for counterpoint, Bullet on a Wire doesn't always work but remains consistently engaging, fueled by committed performances and a genuine sense of unpredictability. Strong and Phillips are especially good, filling their roles believably enough to pay off with a surprising, emotionally

resonant finale quite different from the nihilist direction in which these stories usually go.

Rarely seen outside of the film festival and New York/LA circuits, Bullet on a Wire comes to video in high style, which isn't surprising considering Barrel's superlative track record. The soft, dupey nature of the transfer itself looks like more of an artistic choice (or was caused by budgetary limitations), while the audio (listed as stereo but sounding a heck of a lot more like mono) features crystal-clear music and not-so-crystal-clear dialogue recording. The anamorphically enhanced widescreen framing looks fine apart from the opening credits, which seem constricted at the tom and bottom of the frame.

Sikora, Strong, Phillips, Yow, and Killen all chip in for the lively commentary track, which explains how they shot a challenging, multi-location film for peanuts and made use of a surprising existing location for the prison. Other goodies include a behind-the-scenes featurette (raw footage shot by Yow), bloopers and deleted footage, a photo gallery, and a booklet containing a review by Film Threat's Chris Gore, who enthuses about the film's copious visual grain, and notes by Arnie Bernstein.