Easily the most widely-seen and infamous Italian sex comedy of the 1980s late night cable generation, The Sensuous Nurse answered the prayers of countless adolescents 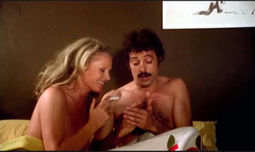 who wondered what that first Bond girl looked like naked. Silly, utterly disposable, and professionally executed without an artistically redeeming bone in its body, this film basically exists to show Ms. Andress in as many provocative positions as possible, both in and out of her fetishistic nurse uniform. On that count it delivers in spades.

The typically threadbare plotline revolves around the ill health of elderly and lecherous Leonida Bottacin Pisu), whose scheming family decides to speed up his demise in order to sell off his winery to a cigar-chomping American businessman pervert, Mr. Kitch (Palance). The patriarch's nephew, Benito (Del Prete), devises a foolproof plan to bring in and train his ex-girlfriend, Anna (Andress), as a nurse bound to kill the old man with overwhelming lust. Meanwhile Anna sets her sights on Benito's young nephew, trying to 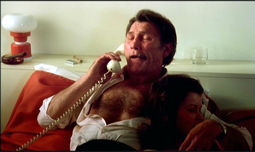 initiate him into manhood despite his suspicions that she's up to no good. Meanwhile the rest of the colorful family engages in foul-tempered shenanigans that usually result in one or more of the characters dropping trou to serve the, uh, story,

Never a particularly good film, The Sensuous Nurse has remained an audience favorite completely due to its goofball comedy and the physical displays of its actresses, including a rare undraped appearance by later Bond girl Luciana Paluzzi (Thunderball). The comedy works fine in a broad, Continental sort of way, relying on sassy "Old World" stereotypes to propel the various characters around like game pieces before finally settling on a final narrative twist that won't surprise anyone familiar with more than one bedroom farce.

Treating this film with respect worthy of a 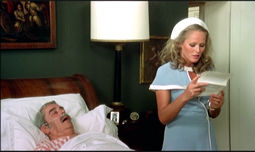 Fellini title, NoShame does what it can with a visually unremarkable film. Neither the director nor the cameraman seem concerned with making the visuals especially pleasing or colorful (surprising considering the involvement of producer Carlo Ponti), but it's all perfectly watchable and well-served by the transfer. (As with previous NoShame titles, it's interlaced and may provoke some viewers into switching their players from progressive scan to avoid any motion bugaboos.) Significantly, this is the full-length version, running quite a bit longer than most cable broadcasts which usually clocked in at less than 90 minutes. The extra footage doesn't add anything to the nudity quotient, but it does restore some amusing character tidbits. For maximum comedy value, skip the wretched English dub and go with the Italian audio track (with optional English subtitles). Extras include a 23-minute featurette, "Calling the Nurse," which features interviews with director Nello Rossati (who later helmed the underwhelming Django 2) and costume designer Toni Rossati, as well as the original Italian trailer, a poster and stills gallery, and appropriately cheeky (not to mention thorough) liner notes and bios by Richard Harland Smith.