More or less derived from the Leopold von Sacher-Masoch's S&M literary classic, Venus in Furs, this oh-so-'80s slice of 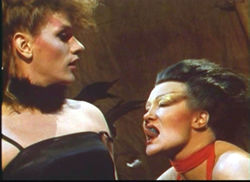 lesbian chic plays like a Fassbinder film stuck in a universe somewhere between The Hunger and Liquid Sky. The often inscrutable plot follows the kinky misadventures of Wanda (Berlin Alexanderplatz's Mechthild), a Hamburg dom who engages in mind games and role playing with her male and female cohorts. For example, a reporter named Mr. Maehrsch (Peter Weibel), gets some first-hand research by licking floors and pretending he's a woman's lavatory (don't ask). Her female lover, high heel fetishist and shoe store owner Caren (Carola Regnier), isn't exactly thrilled when Wanda tosses her aside in favor of the younger and more innocent Justine (Sheila McLaughlin), a Sadaen type from America. On top of that, one of Wanda's theatrical slaves, Gregor (cult favorite Udo Kier), begins to fall for 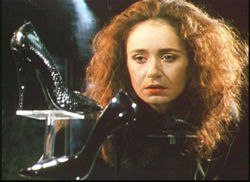 the hard-edged mistress when he's not busy being locked up in stocks and trotted around onstage.

A film more about the dynamics of sexual power than the physical mechanics, Seduction: The Cruel Woman (or in German, Verführung: Die grausame Frau) is a compellingly weird experience with the most extreme use of Dutch angles this side of Battlefield Earth. While some of the visuals steer into tacky territory (especially a frenzied climax filled with lesbians in new wave make-up), the bulk of the film is extremely pleasurable to watch and filled with music video-inspired color schemes. The sexual content is limited to some fairly chaste topless nudity (with nipples covered in black lipstick at one point), so most of the shock value comes from the characters' behavior and the blurring of lines between genders and sexual orientation. 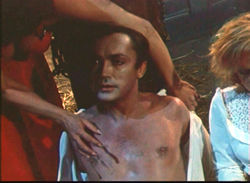 Appropriately, First Run's DVD bears a transfer that will bring back memories of the '80s in more ways than one; the image quality is soft and gauzy, largely a result of the cinematography, though black levels are extremely light and benefit greatly from TV adjustment. Colors are bright, though reds and pinks tend to bleed and smear slightly, and the burned-in English subtitles are legible if not pin-sharp. Co-director Treut (who also helmed the memorably odd Virgin Machine) appears for an English language interview in which she discusses the making of the film, interspersed with bleary film clips from a different source. The package is rounded out with a photo gallery and a handful of not-terribly-Sapphic trailers for other First Run titles, including Merci pour le Chocolat and The Twilight Girls.