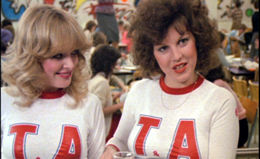 Though no one knew it at the time, 1978 saw a major sea change in the way teen movies would be handled for decades to come thanks to two films: Grease in America, and Lemon Popsicle in Israel. Both were comedies set in high schools between the late 1950s and early 1960s, with smutty jokes and lots of pop culture nostalgia making them palatable to multiple generations. Of course, the Israeli version was much more explicit than its PG-rated but sniggering counterpart, and the two approaches eventually collided together a few years later in the early '80s in Canada, of all places. The result was Porky's, Bob Clark's record-smashing hit about 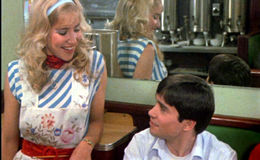 horny guys and girls pulling pranks on each other in high school during the early '60s, with only the mildest lip service paid to the period as the screen was flooded with ridiculous jokes involving characters named Lassie and Cherry Forever. The actors and filmmakers were mostly Canadian, but the film was shot in Florida to ensure broader theatrical play. Not surprisingly, imitations were soon to follow with one of the first out of the gate, Screwballs, making even less of an effort to conceal its Great White North origins. It also managed to be even filthier and more ridiculous than its inspiration, which is why its reputation still lingers today.

At T&A High School, five of the male students wind up in detention one day for trickery involving mirrors, posing as doctors, and stripping in a meat freezer. The new transfer student "from Idaho" is unfamiliar with the pretty Purity Busch (Speciale), the sole virginal holdout in the entire school (where freshman girls are apparently

snatched as soon as they enter the door). Randy hunk Rick (comedian Keleghan), chubby Melvin (Warren), the newbie Tim (Coburn), and snotty trust fund kid Brent (Deuters) conspire to get a look at exactly what Purity's hiding under her prim and proper sweaters, but their plans tend to go wildly awry until they join forces with the rest of the school for a climactic stars and stripes performance unlike any other.

One relentless sight gag and groan-inducing sex joke after another, Screwballs piles on a succession of set pieces designed for very short attention spans with the maximum amount of nudity allowed for an R rating. It's all goofy fun and oddly endearing now, with the unforgettable bowling alley strip-off still ranking as a high point in the teen sex comedy canon. Another scene with the boys all aroused under a library table attempts to outdo the lockerroom contest from Lemon Popsicle (which was not surprisingly remade in '82 for Americans as The Last American Virgin), and director Rafal Zielinski keeps things lively enough that he returned to the same well for more Canadian imitations like Loose Screws and Recruits. (However, the weirdest Screwballs imitator from Canada has to be Oddballs, a film that must be seen to be believed.)

A glance at the credits for Screwballs reveals a few surprises particularly from its co-writers, prolific drive-in director Jim Wynorski (Chopping Mall) and Linda Shayne (the director of Purple People Eater), who also appears in the film as Bootsie Goodhead. The future director of The Gate and I, Madman, Tibor Takács, also had one of his first gigs as a production manager. During the seqeunce in which the boys visit a strip club, that's vivacious Russ Meyer vixen Raven De La Croix (Up!) doing the main performance. And strangest of all, this was co-financed by New World Pictures, which explains the unexpected Roger Corman nods flitting by in the background.

A steady renter on VHS, this film was stuck in various rights issues which prevented a legitimate special edition. That didn't stop mediocre releases from old VHS-era masters popping up in the UK and Germany, but Severin's officially-sanctioned DVD and Blu-Ray is really the way to go. The film looks about as good as possible given its low budget origins (sourced here from the 16mm interneg); colors are extremely vibrant and film-like, and the transfer appears extremely cinematic without any undue digital cleanup. Of course, this isn't exactly artistically accopmlished eye candy, but all the T&A shots look crystal clear. Zielsinski pops up twice on the disc, first for an audio commentary with Severin's David Gregory and John Creegan and then for a separate 11-minute video interview. He remembers a great deal about the production and goes into detail about Canadian indie filmmaking at the time, with tax shelter productions turning the country into an exploitation mill until the late '80s. Wynorski and Shayne appear together for another video piece in which they talk about the film's influences, how they met, and where inspiration came from for some of the most memorable set pieces. Deuters and FX artist Gerald Lukaniuk get shorter separate interviews as well, discussing the original casting choices and how some of the ridiculous visuals were achieved (with Lukaniuk perhaps conjuring up more phallic and breast-oriented visuals than any other commercial film from the decade). For some additional context you also get a great piece with Paul Corupe, editor of the essential Canuxploitation.com, who talks about the film's place in the great and majestic tapestry of tax shelter classics, while modern media legend Mr. Skin and his writer, McBeardo, offer an appraisal of '80s sex comedies and how that era could never be duplicated today. Finally you get the surprisingly raunchy theatrical trailer and a handful of deleted and extended footage taken from a dupey-looking Spanish tape, which are interesting alternatives but nothing essential. It's an absurdly comprehensive and wonderfully entertaining release that puts major studios' treatment of other films from the same era to shame.