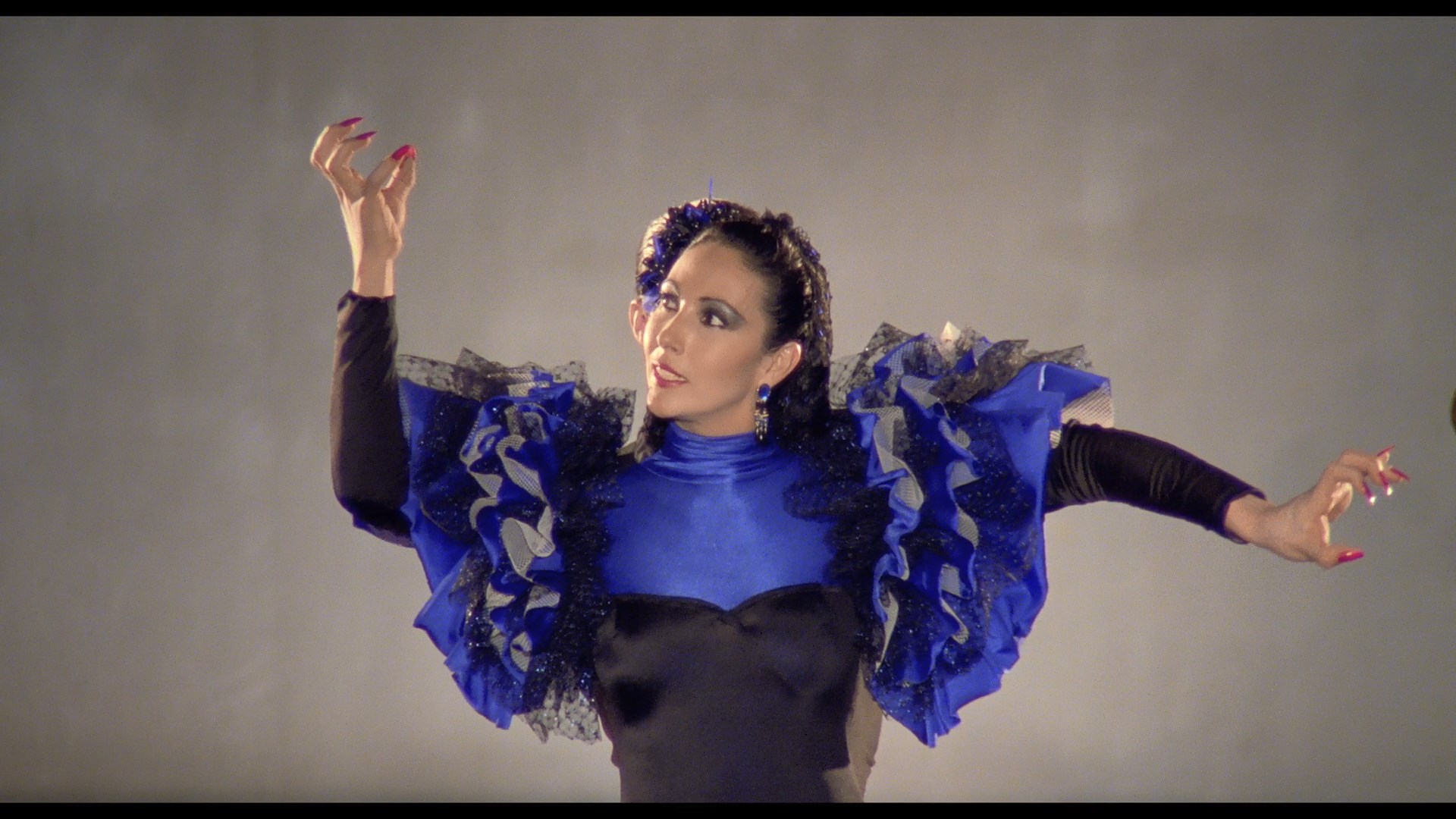 A strong contender for the finest cult film of the '80s, Alejandro Jodorowsky's Santa Sangre marked a much-delayed return to directing for the El Topo and The Holy Mountain filmmaker after the disastrous fate of his prior film, 1980's rarely seen Tusk. Fortunately the 19-year interim allowed him to craft his most deeply affected and accessible film to date, a stunning statement about the nature of human will and the role of violence and bloodshed in everyday life. It also happens to be one of the great hallucinatory experiences in cinema, a visually intoxicating horror trip that makes a perfect introduction for viewers eager to travel down the more rarely explored routes of international film.

Confined to a low-security mental institution, troubled Fenix (Axel Jodorowsky) is haunted by his childhood in a circus where his domineering ringleader father, Orgo (Stockwell), marked him for life with a painful eagle tattoo and fooled around with the libidinous tattooed female half of his knife-throwing act (Tixou). Meanwhile his mother, Concha (Guerra), is a religious fanatic devoted to a fictitious saint, the titular Santa Sangre, a young girl whose rape and dismemberment resulted in a sacred, never-drying pool of holy blood. When Concha catches her spouse in the act one night, she douses his crotch with acid and loses both her arms to his knife blades as a result before he slashes his own throat. However, years later in the institution, she returns to lure Fenix back out in the world where he can serve as her new arms on a strange journey involving performance art and murder. 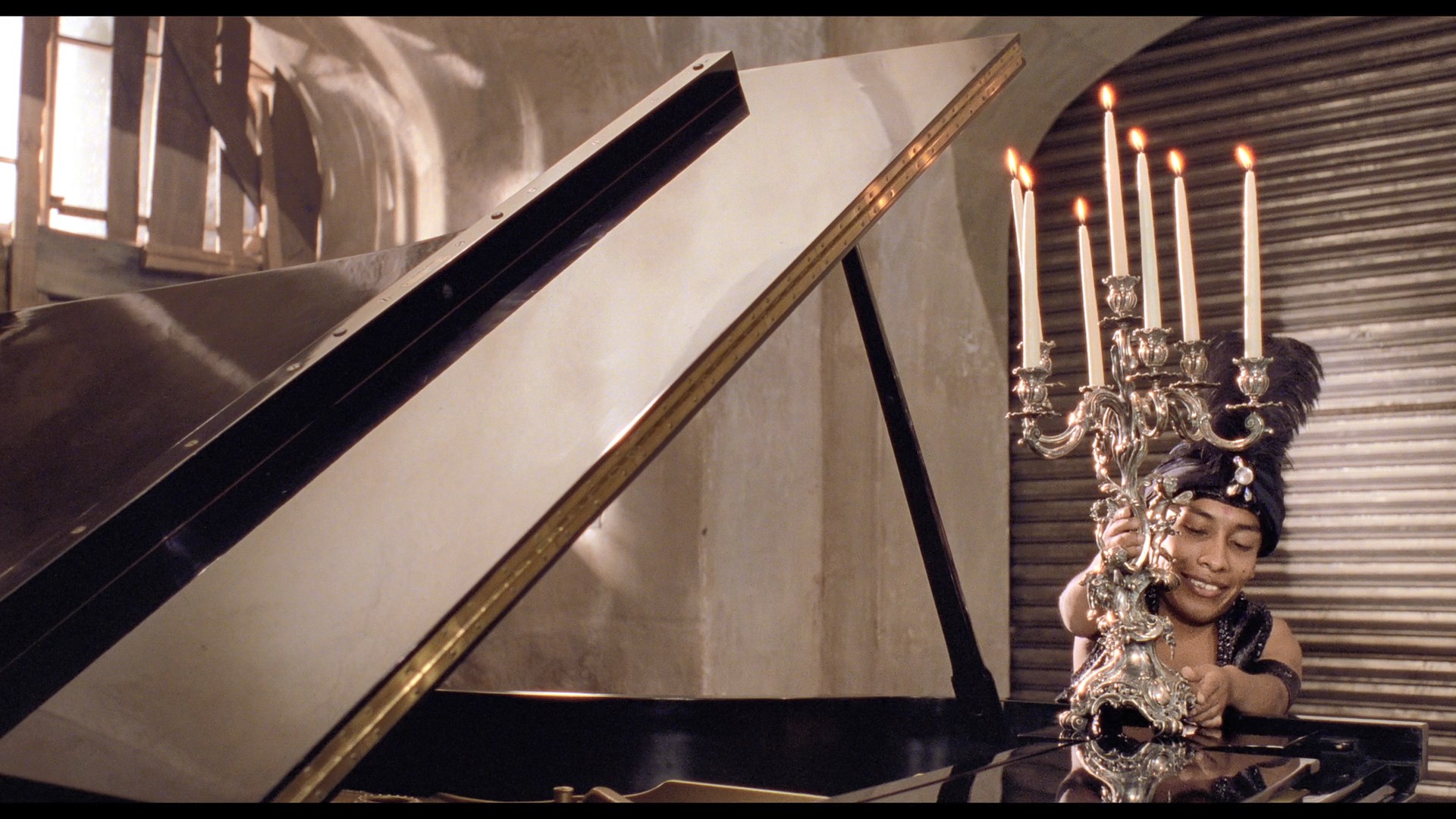 That synopsis doesn't even remotely begin to cover the wild delights packed into every scene of Santa Sangre, which is loaded with vivid characters and incidents including the circus denizens, the real-life downtrodden residents of Mexico City, a gender-bending Mexican female wrestler, four of Jodorowsky's sons in different roles (with the youngest, Adan, playing Fenix in the childhood scenes), and the indelible mute, deaf character of his potential savior, Alma, a white-faced girl played as a youth and adult by the lovely Faviola Elenka Tapia and Sabrina Dennison, respectively. One fascinating influence on the film is producer Claudio Argento, who worked on many of his brother Dario's films and whose Italian financing gives the film a unique multinational flavor. The most noticeable of these is composer Simon Boswell, a veteran of Phenomena, Demons 2, and Stage Fright (not to mention later films like Hardware and Dust Devil), whose haunting electronic soundscapes here still rank among his best work. (More surprisingly, one of the executive producers was the infamous and very prolific René Cardona Jr.; to say the least, this is the greatest film to ever bear his name.)

During the waning days of Republic Pictures before the company was swallowed up into Artisan (and then Lionsgate and Paramount), Santa Sangre was one of their last theatrical releases and barely appeared on a few screens for a week. Most viewers only had the chance to view it via Republic's VHS and laserdisc releases, with the former available in a useless R-rated version and an uncut, unrated one (which most obviously contained the film's most Argentoesque sequence, a spectacular red-lit knife murder that would have done Tenebrae proud). Unfortunately the unrated laserdisc was time compressed to fit onto a single platter, and both versions suffered from that company's tendency to artifically oversaturate colors to the point of excessive bleeding and fake fleshtones. The film fared somewhat better in Europe and Asia where its excesses were more appreciated, though home video versions there was also usually cropped and not very impressive. An official DVD eventually appeared in the UK from Anchor Bay, though it suffered from severe edge enhancement and one of their trademark, unlistenable fake 5.1 remixes; on the other hand, it also contained a handy (albeit very heavily accented) audio commentary with Jodorowsky and film writer Alan Jones, as well as a minor deleted scene, the ubiquitous "La Constellation Jodorowsky" doc (which has appeared on most of his DVD titles dating back to the original Fando & Lis), a live interview with the director, and Adan's three-minute B&W short film, "Echek." 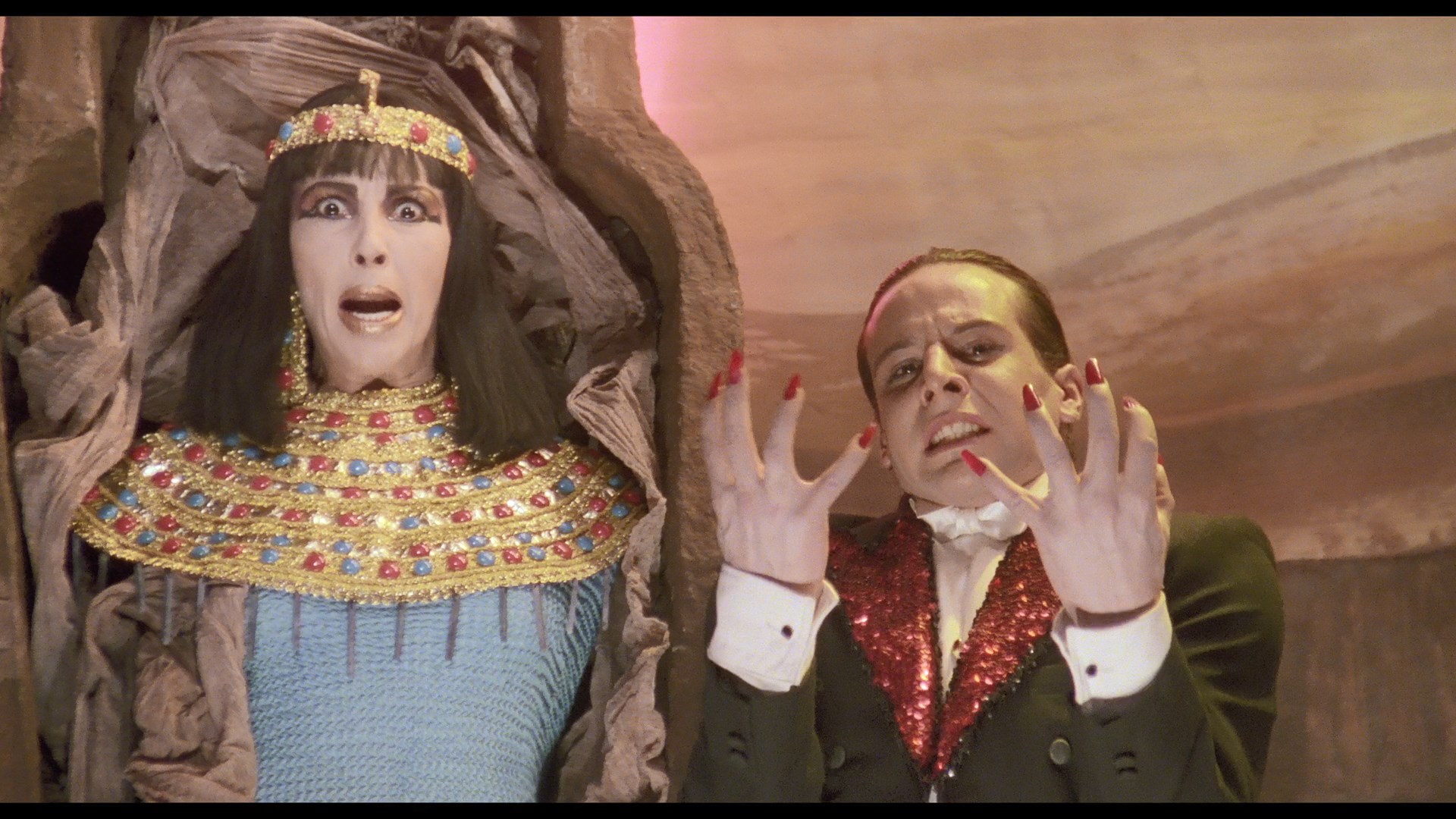 After many, many years of American unavailability, Santa Sangre finally rose again courtesy of Severin on both DVD and Blu-Ray. (Only the DVD was available for review at this time, but expect an update when the HD version arrives.) The transfer is definitely a surprise compared to the artificially tweaked version most people have come to accept; several outdoor scenes looked more muted and naturalistic in comparison, though the rich reds and blues pop through when they should (especially when blood appears, which is quite frequently). The main audio option is the original English track in 2.0 stereo (despite the relooping of some minor characters, English is the original language of the film), along with Italian and Spanish mono tracks and optional English captions. The Jodorowsky/Jones commentary is carried over here as well along with the American and Japanese trailers, an expanded selection of deleted scenes (from a workprint) with Jodorowsky commentary, and bonus Severin promos for Gwendoline, The Hairdresser's Husband, In the Folds of the Flesh, Psychomania, and What?, whose shared audience probably numbers in the double digits. 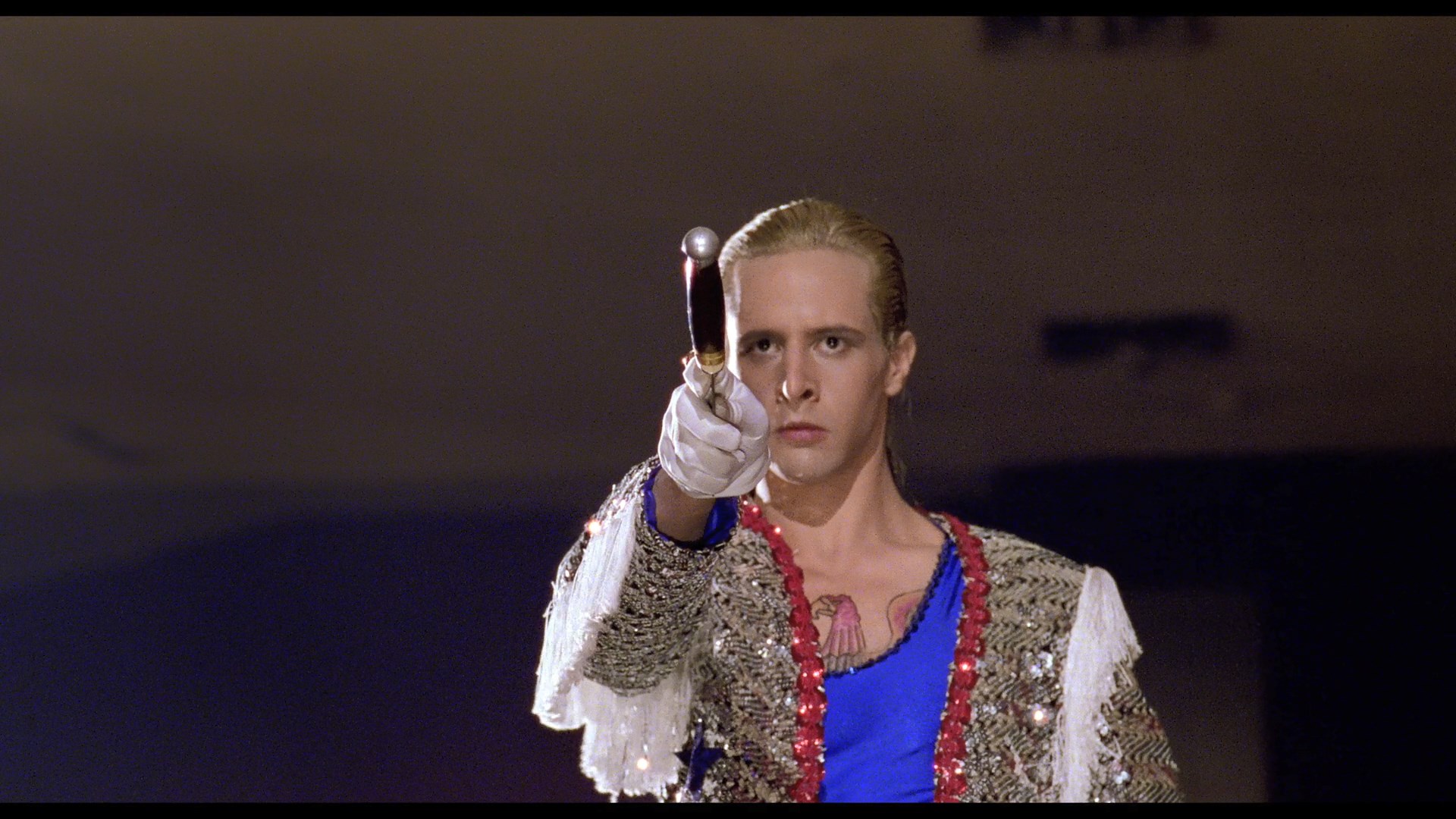 For supplements, the real riches lie on disc two. Chief among these is the incredible 96-minute "Forget Everything You have Ever Seen: The World of Santa Sangre," which features new interviews with virtually all of the surviving principals. Three of the Jodorowskys (Alejandro, Axel, and Adan), Guerra, Boswell, Dennison, and Tixou are just a few of the interview subjects here, and the entire saga of its making is covered in fascinating detail. The director and his sons don't pull any punches talking about the film, including the director's slapping incident with Adan and its unexpected payoff and a lengthy period of estrangement with Axel during the latter part of shooting. Dennison (who is really deaf and speaks with a voice interpreter) is vivacious and has some great moments as well, especially when she talks about the first time she summoned up the nerve to confront the director over a problematic scene. Boswell's participation is a bit limited but covers the ground of his score well enough, while the still gorgeous Guerra talks about the development of her wild pantomime routine (originated from a Jorodowsky piece written for Marcel Marceau) and the hilarious, bawdy technique she used to walk as one with Axel during the intense climax. Easily worth the price of the disc all by itself. Also included is Jonathan Ross' great For One Week Only episode devoted to Jodorowsky (with some unrelated film clips dropped due to copyright considerations); along with the director it includes some other surprising interview subjects including Marceau, Dennis Hopper, and Omar Sharif. Also included is a short but interesting video overview of Goyo Cardenas (the real-life serial killer of prostitutes who inspired the film), the stage Q&A with Jodorowsky from the previous UK disc, a colorful 2003 interview with the director more about his overall influences and thematic concerns, a seven-minute Jodorowsky chat with (an unseen) Simon Boswell, a perplexing (and very brief) short film called "Blink" by Boswell which involves shooting the filmmaker's face, the "Echeck" short film (with optional filmmaker commentary this time), and a nifty music video for "Close Your Eyes," the title song from Boswell's highly recommended album, which features Jodorowsky speaking in a hypnotic voice intercut with wildly edited Santa Sangre clips. Obviously, this is one formidable release for a truly wonderful film whose stature continues to grow every year.