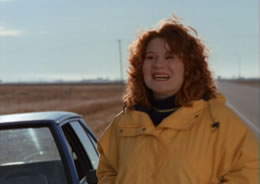 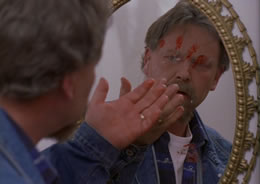 Classified on the DVD box as "comedy/thriller," this utterly inscrutable Saskatchewan offering may be the weirdest Canadian film almost no one has ever seen. Presumably designed to be a seriocomic road movie, it's the kind of film in which every actor seems to be acting in a totally separate story and the script appears to be cobbled together by tossing pages from three random screenplays into one stack for the production crew. After an appearance on Canadian pay TV, the film sank without a trace for years without a single home video release before being salvaged (from a dumpster, according to the liner notes) by the folks at Videonomicon.

Canadian indie fixture Bill LeVasseur stars as the babe-free Ryan, who dodges the angry, gun-toting dad of female stalker Connie (Hitchings) by hopping into his car to take off to Arizona by way of Calgary. Along the way he stumbles through a weird assortment of predatory characters including a murderous socialite (Rossini) who tries to set him for her crimes, a lot of ammo-loving thugs with mullets, a trio of castrating cheerleaders, a nerdy goon named Shakespeare (Waughtal), and many more, hoping all the while for Connie to clear his name after she accuses him of driving her to a suicide attempt -- even when he's busy running for his life or taking a gig as a stripper in maple leaf boxers. 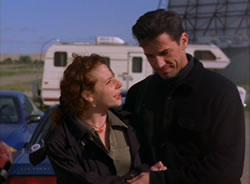 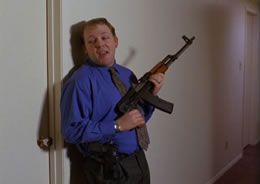 Los Angeles, but it's far odder to see a Saskatchewan attempt to muscle in on the same territory. The packaging repeatedly compares this to the most famous poster boy for this odd cinematic strain, Tommy Wiseau's notorious The Room, but you can find plenty more wackadoodle outings like this ranging from After Last Season to another crackpot Canadian comedy, Joe's Wedding. Here the location makes all the difference as the spacey plot turns, canned dialogue (seemingly all rerecorded via ADR), and wall-to-wall droning synth score combine to create a film that truly defies classification or any rational explanation.

Given its near brush with extinction, it's thankful we've gotten this film in any form at all on home video. It was obviously shot on film, but the opening and closing credits are telltale signs it was edited on video and probably never had a shot of looking better than it does here, culled from the sole surviving Beta SP master. The full frame (apparently open matte) transfer looks fine as long as you know what you're getting, and the standard stereo audio is fine given that it all sounds canned and really, really strange. Limited to 500 units, the DVD also features a pretty astonishing roster of extras kicking off with an audio commentary featuring writer/director Ray Ramayya (a former school superintendent with a thick Indian accent), actor Peter Kooy, and crew member Shayne Metcalfe, moderated by Videonomicon's Tyler Baptist, 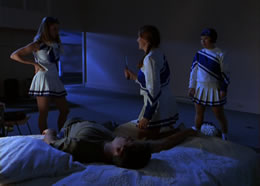 which is often tough to make out at times thanks to some pretty hot audio levels but can be pretty amusing at regular intervals. In "The Road Less Traveled," Ramayya chats for 12 minutes about his intentions for the film, much of them muted by his heavy accent and some pretty harsh sound recording. Then LeVasseur gets his turn with an 11-minute featurette, "Along for the Ride," 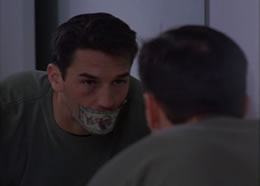 complete with a long plug for his website and various anecdotes about the shoot from the hiring process (thanks to the involvement of his mother-in-law) through memories of his various costars. He's also wearing a pretty great t-shirt and reveals he didn't have a complete script when he started shooting (at the same time as a gig on The West Wing), which is easy to believe.

After that you get a home video promo trailer, a gallery of promotional material and 13 behind-the-scenes stills provided by LeVasseur, and an entire second bonus film directed by Ramayya from 1998, Seetha & Carole. This one's far less weird as it tells a pretty straightforward female bonding story about a female TV reporter, Carole (Beata Van Berkom), whose plans to adopt an Indian boy hit some major speed bumps involving the kid's hostile mother, Seetha (Archana), as well as local villagers and the adoptee's opportunistic father. It's basically an average Lifetime movie, though the very strong Canadian accents contrasting with all the Indian actors give it a slightly offbeat vibe. In addition to the trailer for this film, there's also a folder of DVD-Rom goodies including a batch of promo materials (sell sheets for both of the features on this disc) and higher res versions of LeVasseur's stills.