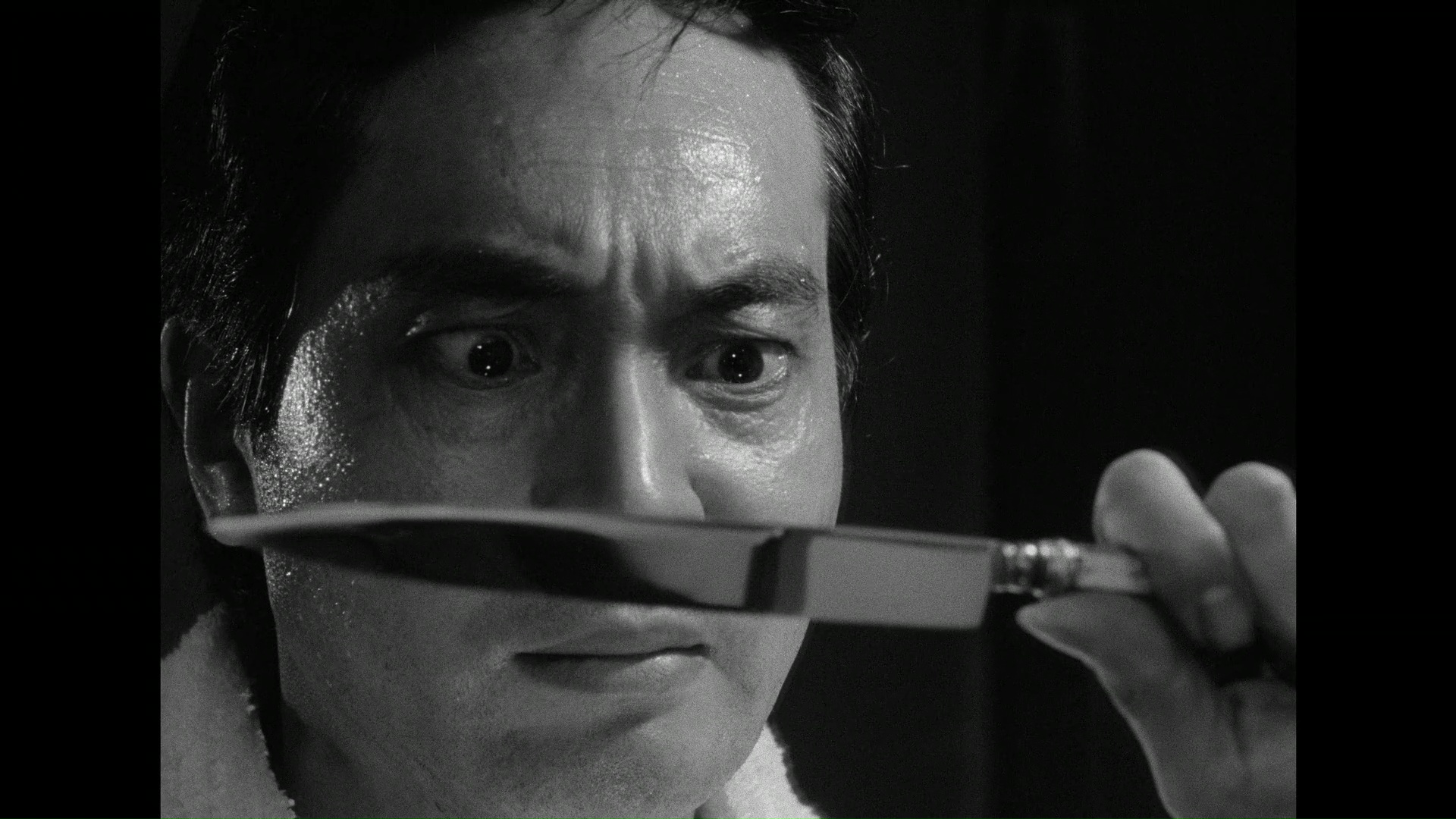 up for an avant garde 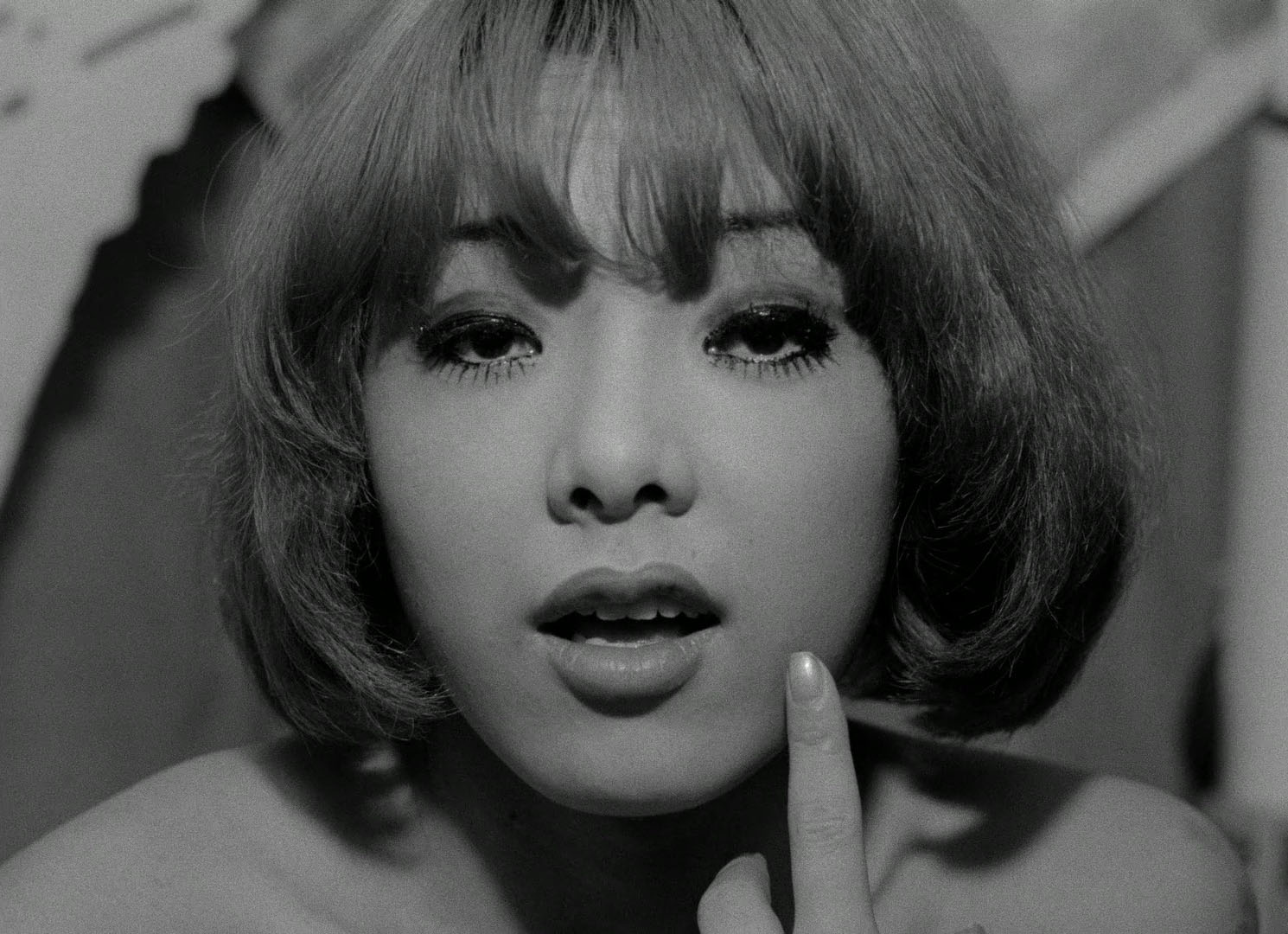 gore/cross-dressing/Japanese version of Oedipus Rex crossed with A Hatchet for the Honeymoon? Well, look no further than Bara no sôretsu, christened in English as Funeral Parade of Roses (and also known as Funeral Procession of Roses). Packed with pop art visuals, cheeky references to Jean Genet, swinging music, and the most thorough audience disorientation outside of a Jodorowsky film, this unique fusion of art house pretense and giddy exploitation is not for the faint of heart but well worth seeking out.

Gender-bending actor Peter (best remembered as the Fool from Akira Kurowsawa's Ran and the madam from Fruits of Passion) stars as cross-dressing club kid Eddie, first seen in the arms of Gureko (Tsuchiya), owner of the Genet Bar in Shinjuku. Tormented as a teenager, Eddie is plagued by hallucinatory, violent memories of his late mother burning his father's face out of a photograph which he now keeps as the only keepsake of his family. Meanwhile he's also fighting for Gureko's heart, since the older man is also being wooed by the nightclub's queen bee, Leda (Osamu). The feud leads to a nasty cat fight and a glamorous funeral, with the escalating drama finally exploding in a bloody, startling climax. Along the way the film is interspersed with "man on the street" interviews with various men of all stripes and a few drag queens, with even the cast getting in on the action to make the film even stranger.

Packed with bizarre tonal shifts and 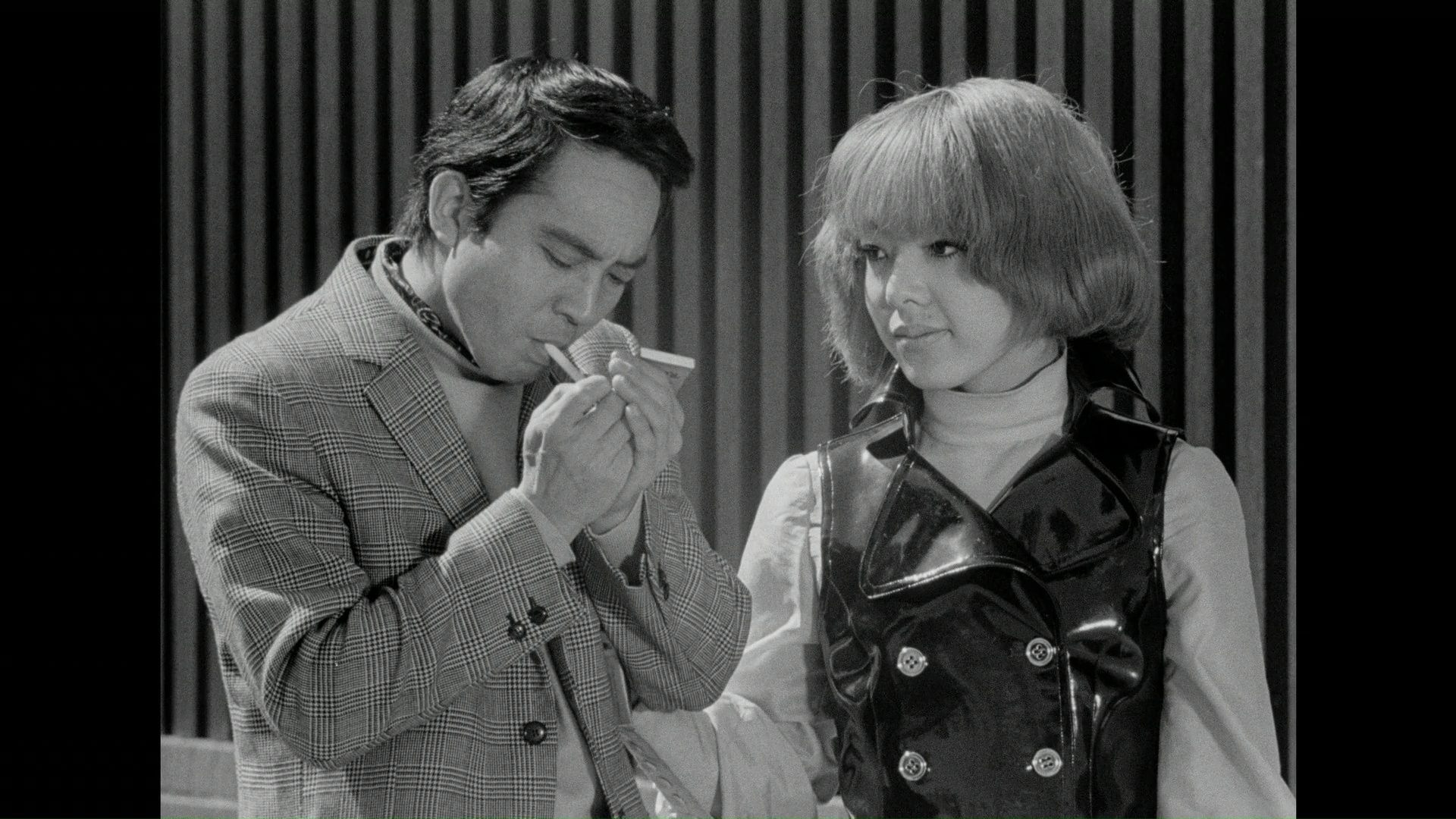 deliberate distancing devices (inserts of film leader, startling bursts of animation and paintings, comic-style dialogue balloons popping out of characters' mouths), Funeral Parade of Roses has been cited in several sources as an influence on Stanley Kubrick's A Clockwork Orange (presumably for its whiplash editing, youth gang 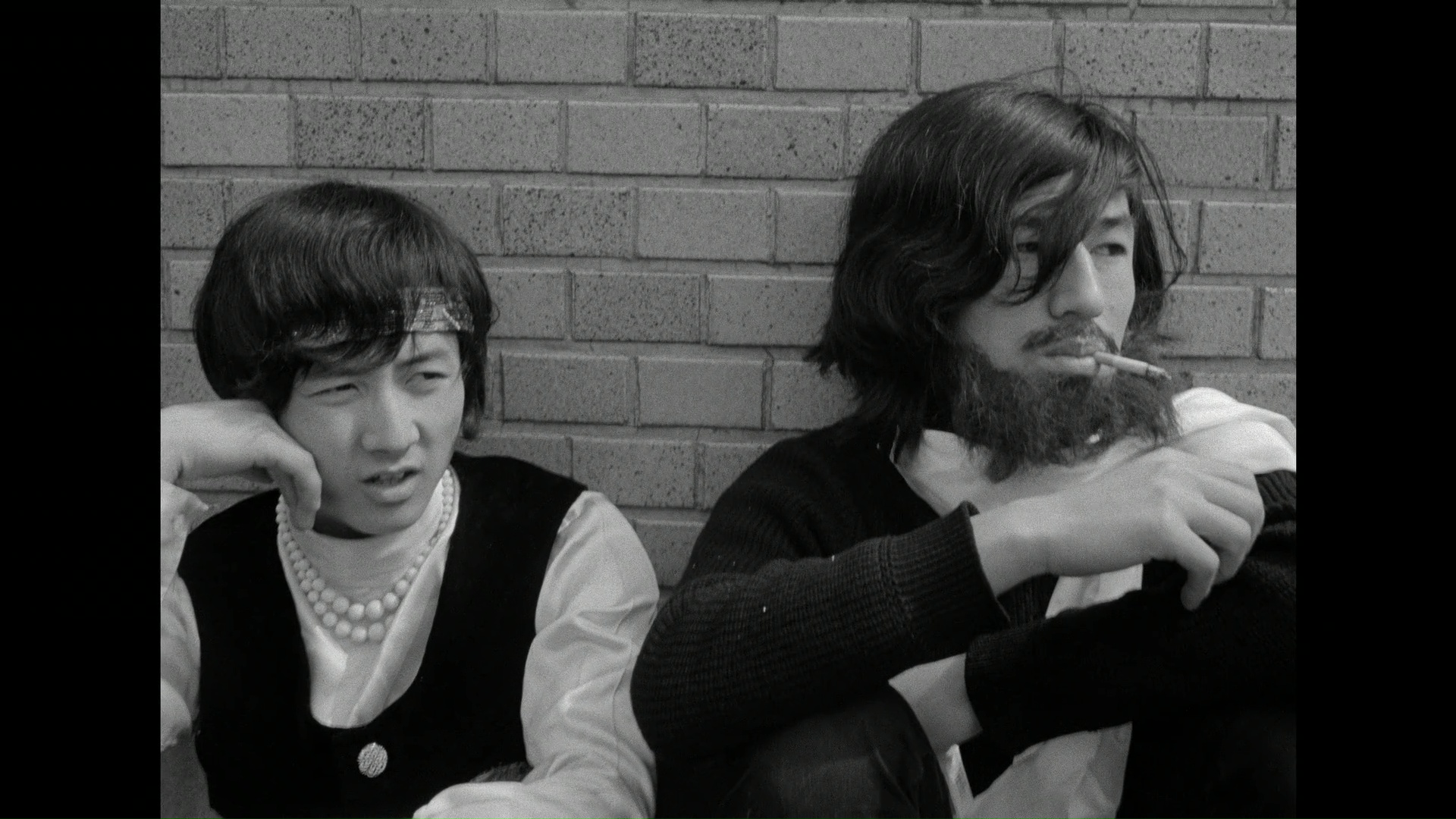 imagery and sped-up montage sequence); whatever the case may be, it's surprising the film doesn't enjoy a larger reputation as it's easily more accessible than anything by, say, Koji Wakamatsu. Certain aspects are awkward now like the occasional wallowing/self-pitying attitude common at the time (see Boys in the Band or The Killing of Sister George for more flagrant examples); however, for the most part the film plays quite well and benefits by draping its flamboyant techniques on a traditional tragic story. The gruesome, cleverly executed payoff is worth the price of admission alone, with some jolting eyeball mayhem that would make Lucio Fulci stand up and applaud.

The Region 2 Japanese DVD from 2000, the first home video option with English subtitles, featured an extremely good transfer in the original 1.33:1 aspect ratio. Contrast and black levels are dead on, and detail level is fine. Extras include an edgy theatrical trailer and a video interview (in Japanese only) with director Toshio Matsumoto. The disc was also available in a pricey, limited edition "Toshio Matsumoto Zen Gekieiga DVD Box" with three other films, Shura (a.k.a. Demons), Juroku-sai no senso, and Dogura magura, and Eureka issued it on UK DVD as well.

It wasn't until 2017 that the film finally made its U.S. home video debut on Blu-ray from Cinelicious Pics, following a limited theatrical run of the new 4K restoration from the original negative. 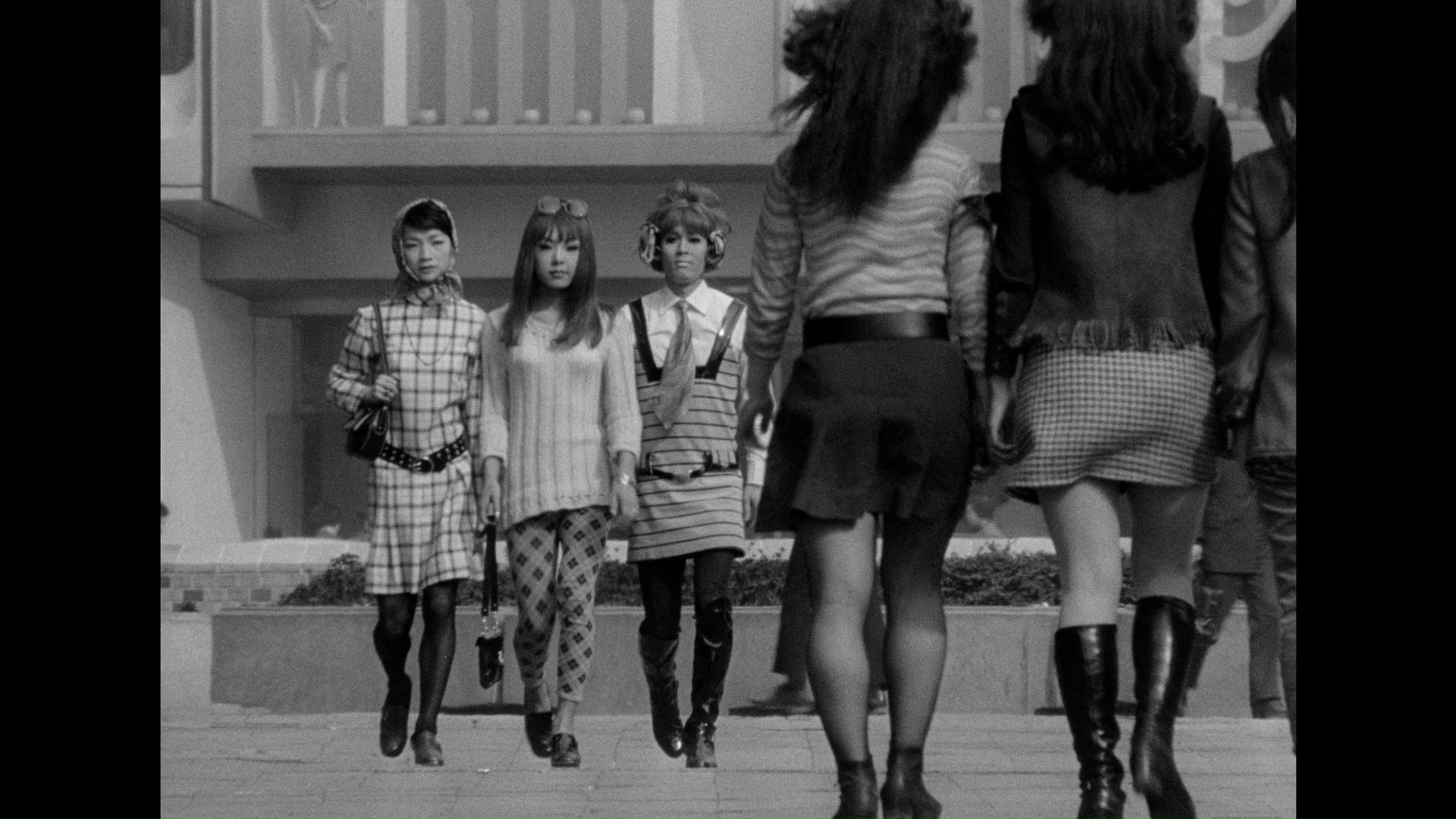 It looks stunning, not surprisingly, with an often staggering amount of additional detail visible. Contrast looks exceptional as well with a rich sense of depth throughout, even in the more 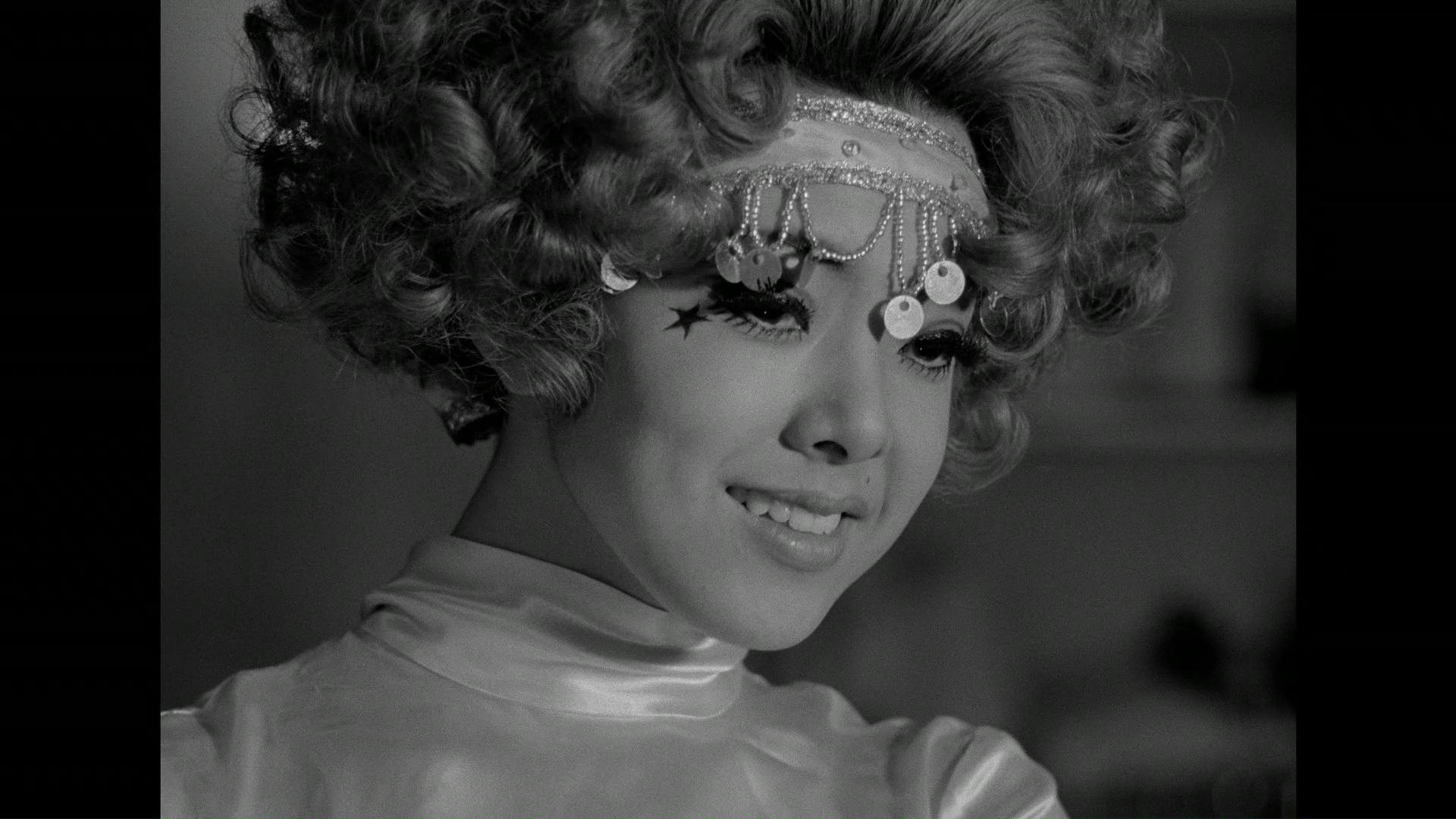 deliberately stylized sequences. The DTS-HD MA Japanese mono soundtrack is also in excellent condition, with optional English subtitles. Film programmer and Japanese cinema expert Chris D. offers a thorough audio commentary including deep reads of the film's symbolism and visual motifs as well as the film's aesthetic ties to the avant garde and the Japanese new wave, including its pop culture elements with real-life figures popping up as themselves (from some famous faces to the non-actor "gay boy" interview subjects). Also included on the first Blu-ray with the feature are the original Japanese trailer and the impeccably edited, striking 2017 trailer for America. A second Blu-ray features a selection of eight Mutsomoto experimental shorts: "Nishijin" (1961, 25 mins.), "The Song of Stone" (1963, 24 mins.), "Ecstasis" (1969, 11 mins.), "Metastasis" (1971, 8 mins.), "Expansion" (1972, 14 mins.), "Mona Lisa" (1973, 3 mins.), "Siko Soku Ze Ku" (1975, 8 mins.), and "Atman" (1975, 11 mins.). All are impossible to synopsize, of course, but the themes run from a monochrome study of developing civilization and nature to eye-popping psychedelic experimentation. In the context of the main film, "Ecstasis" is the most relevant as slivers of it would wind up being used in the feature. The packaging features a liner notes booklet with an extensive essay by Hirofumi Sakamoto, Director of the Postwar Japan Moving Image Archive, with Hiroshi Eguchi and Koji Kawasaki, charting Matsumoto's iconoclastic career in Japan and notes on all of the short films contained here. 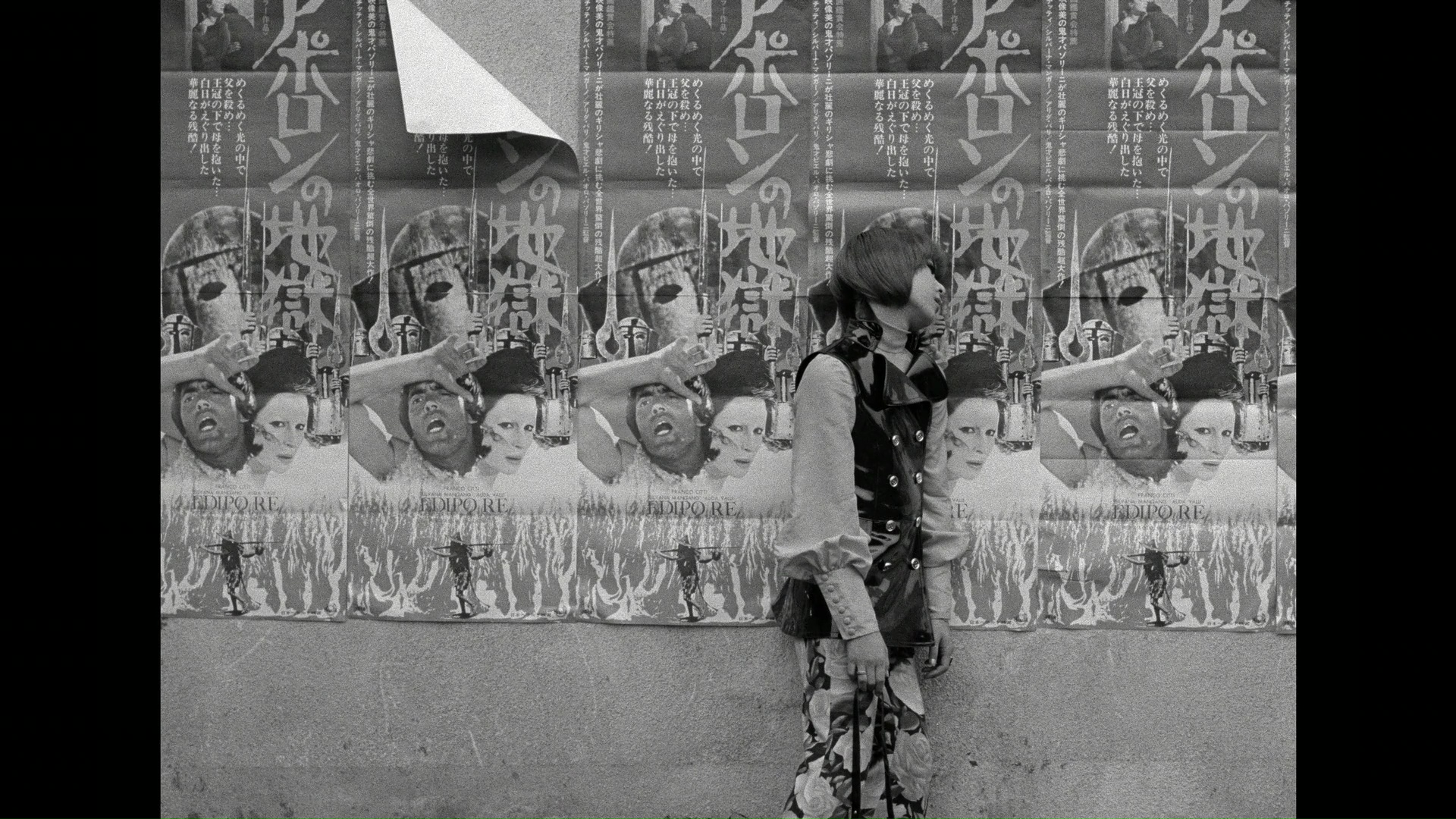 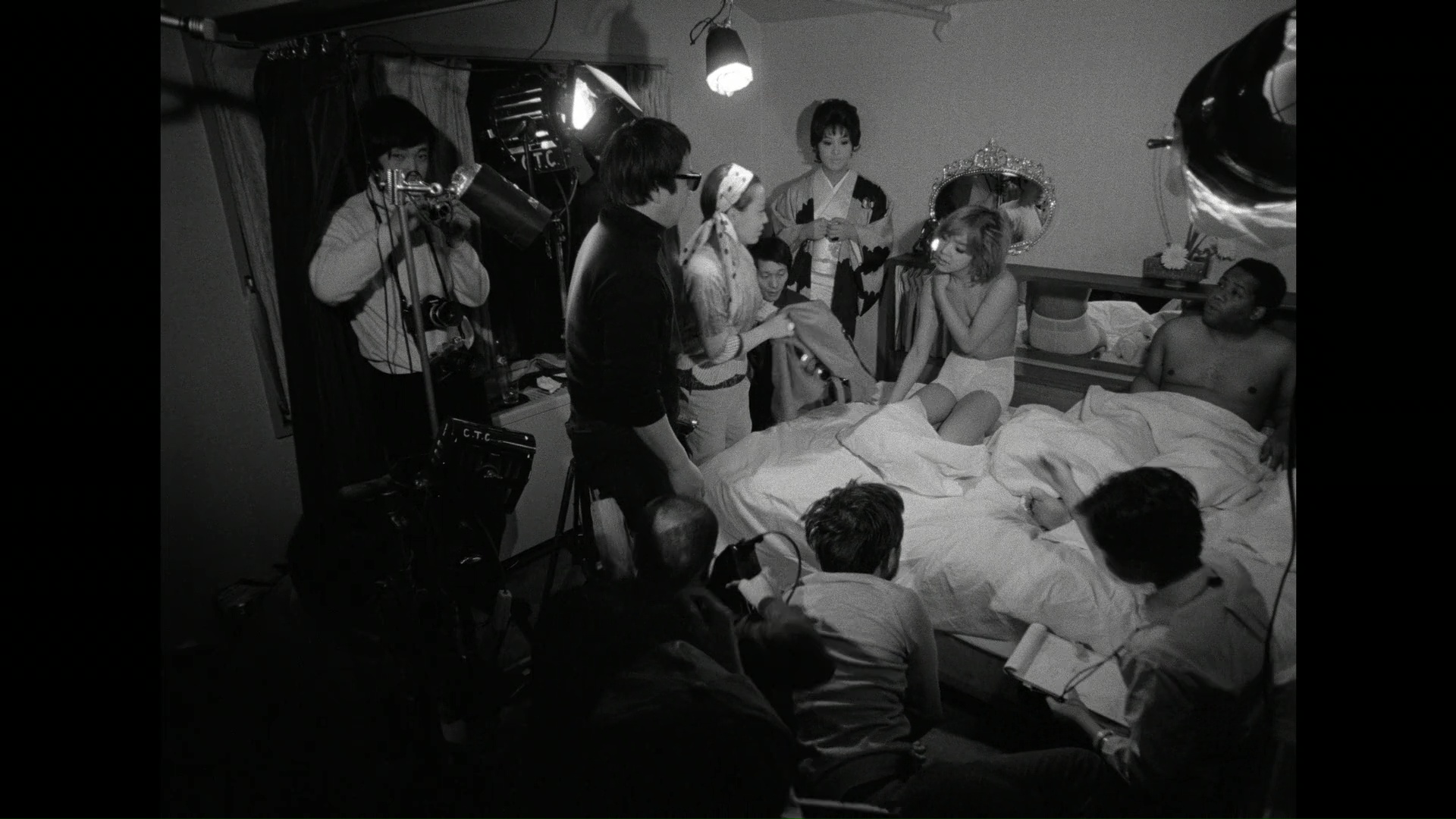 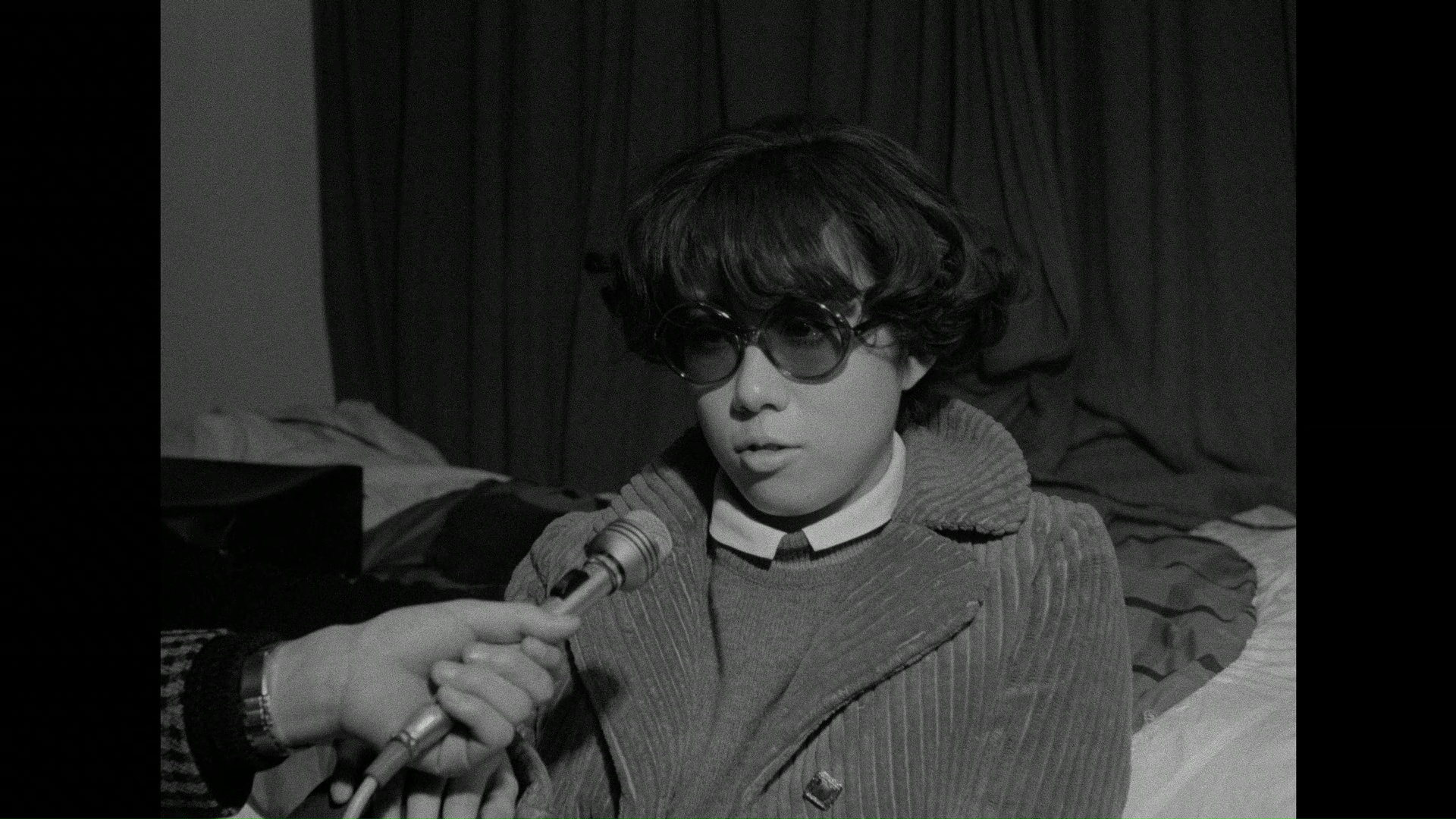 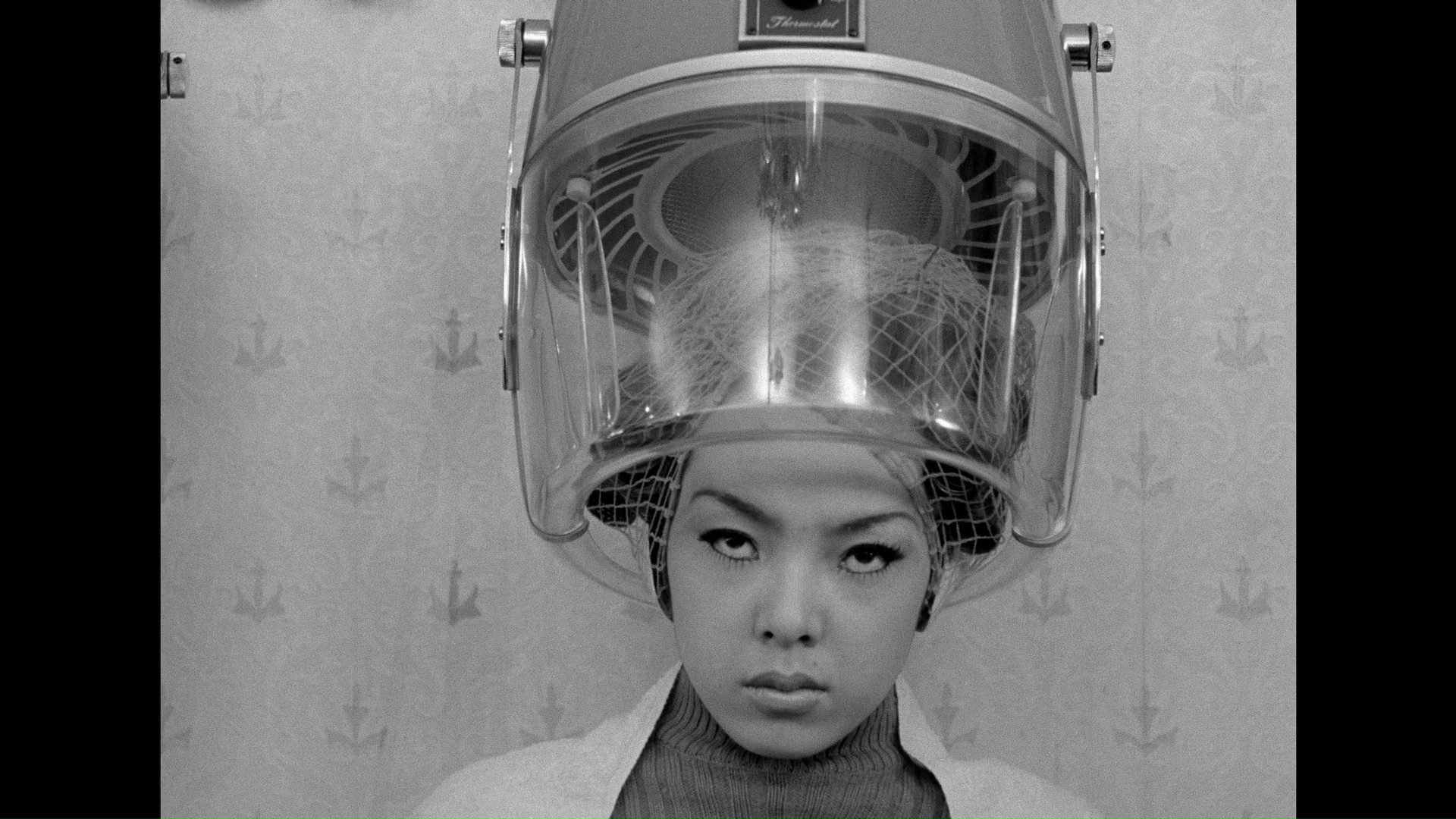 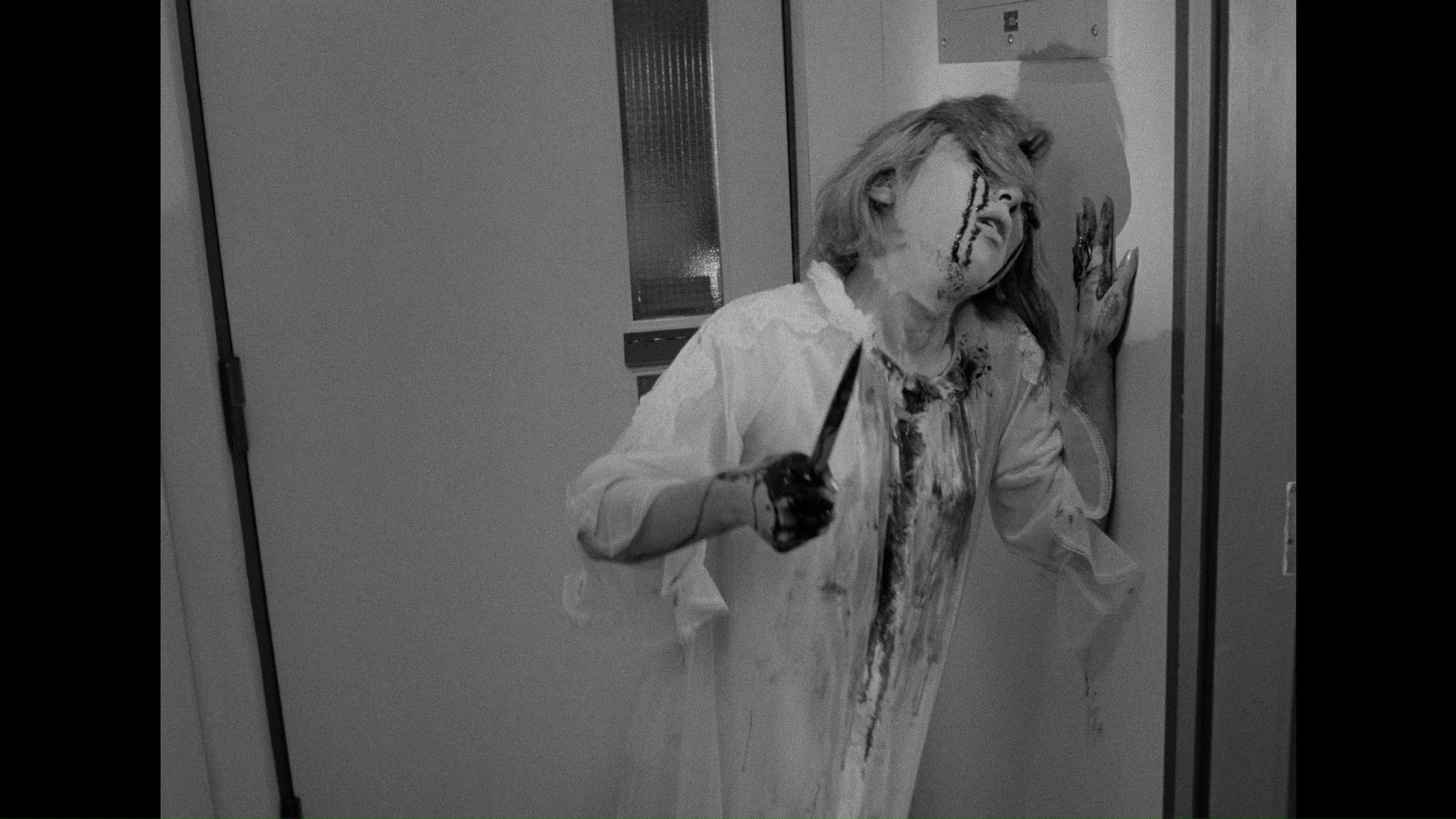 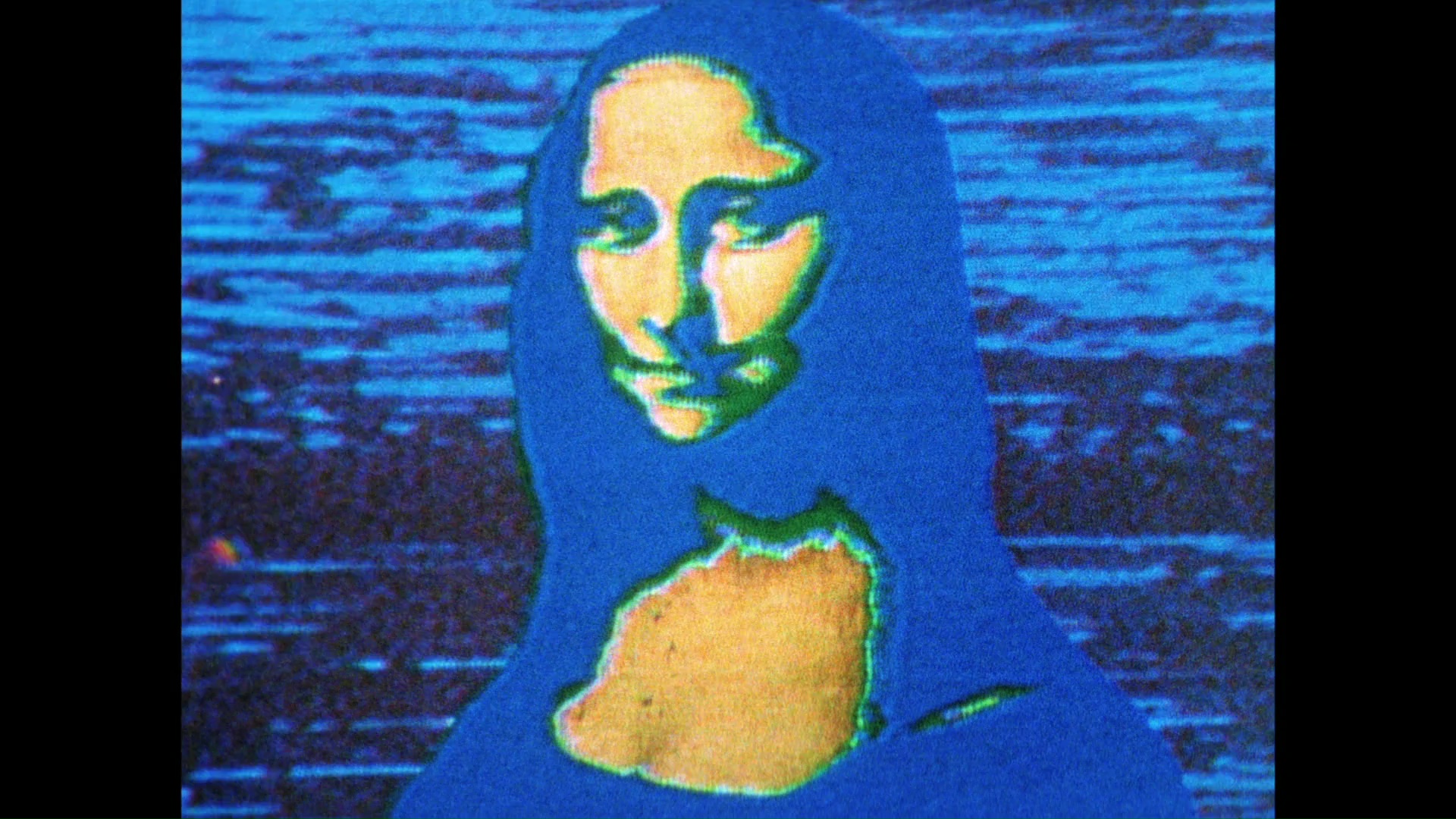 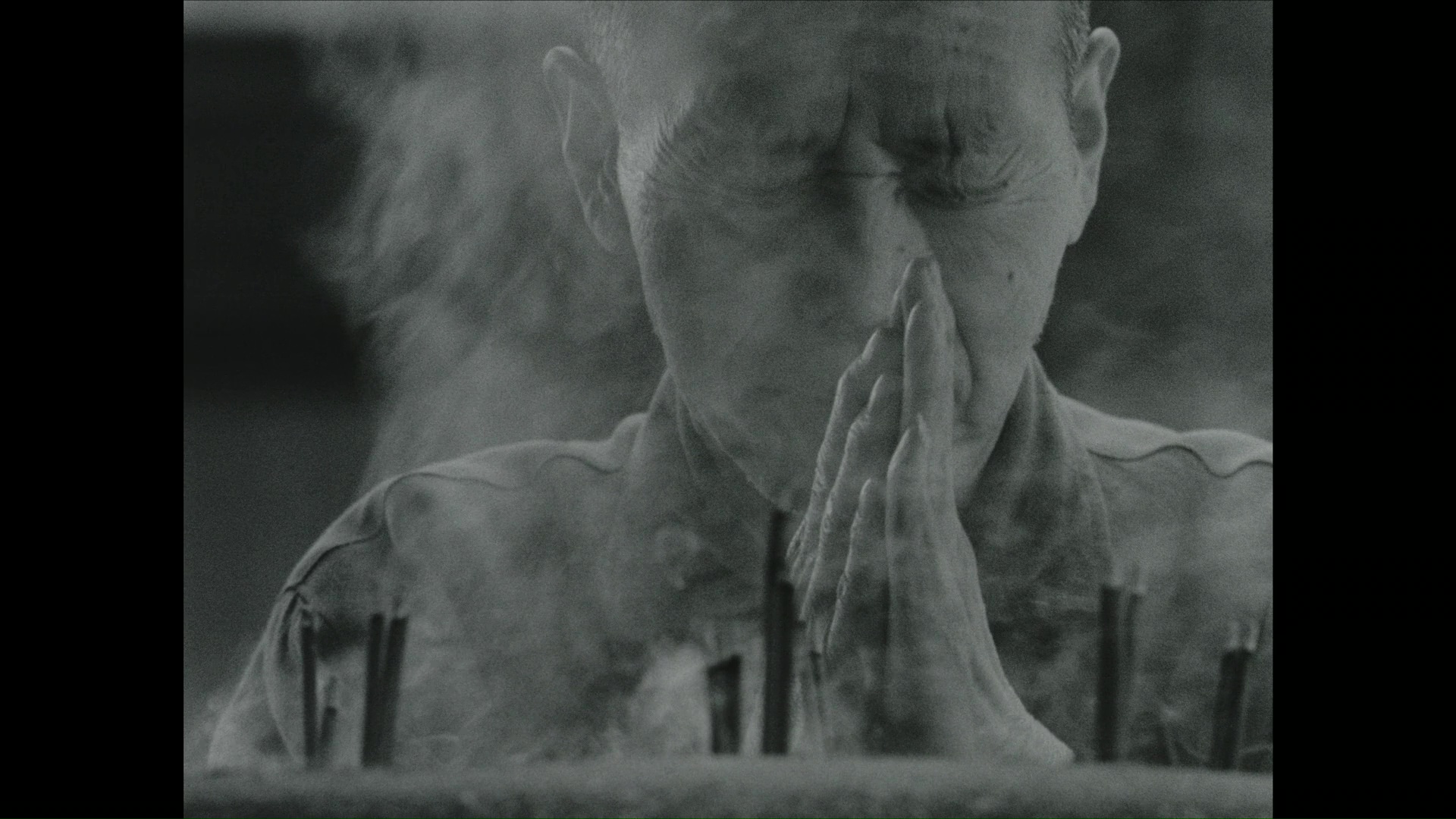