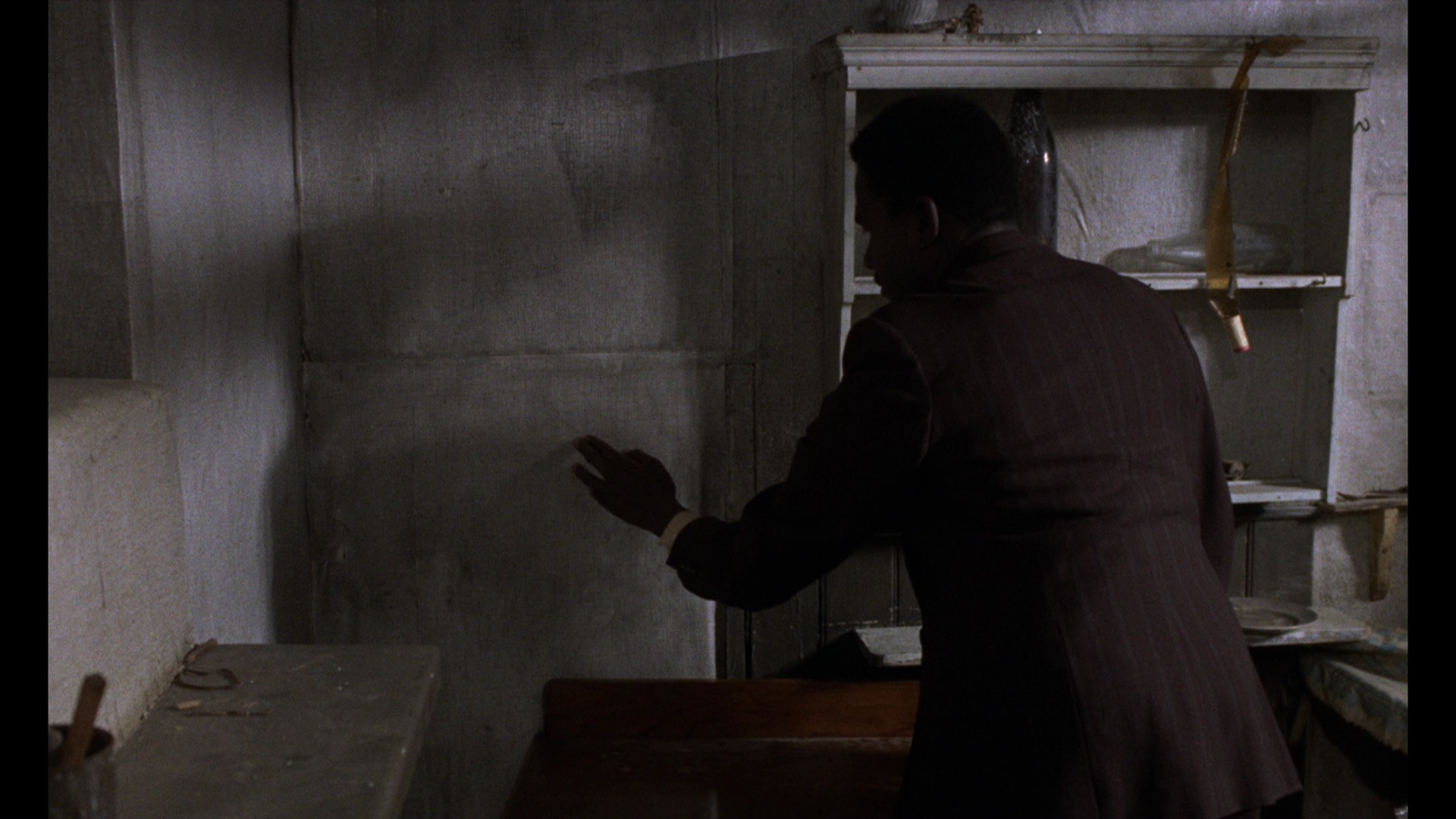 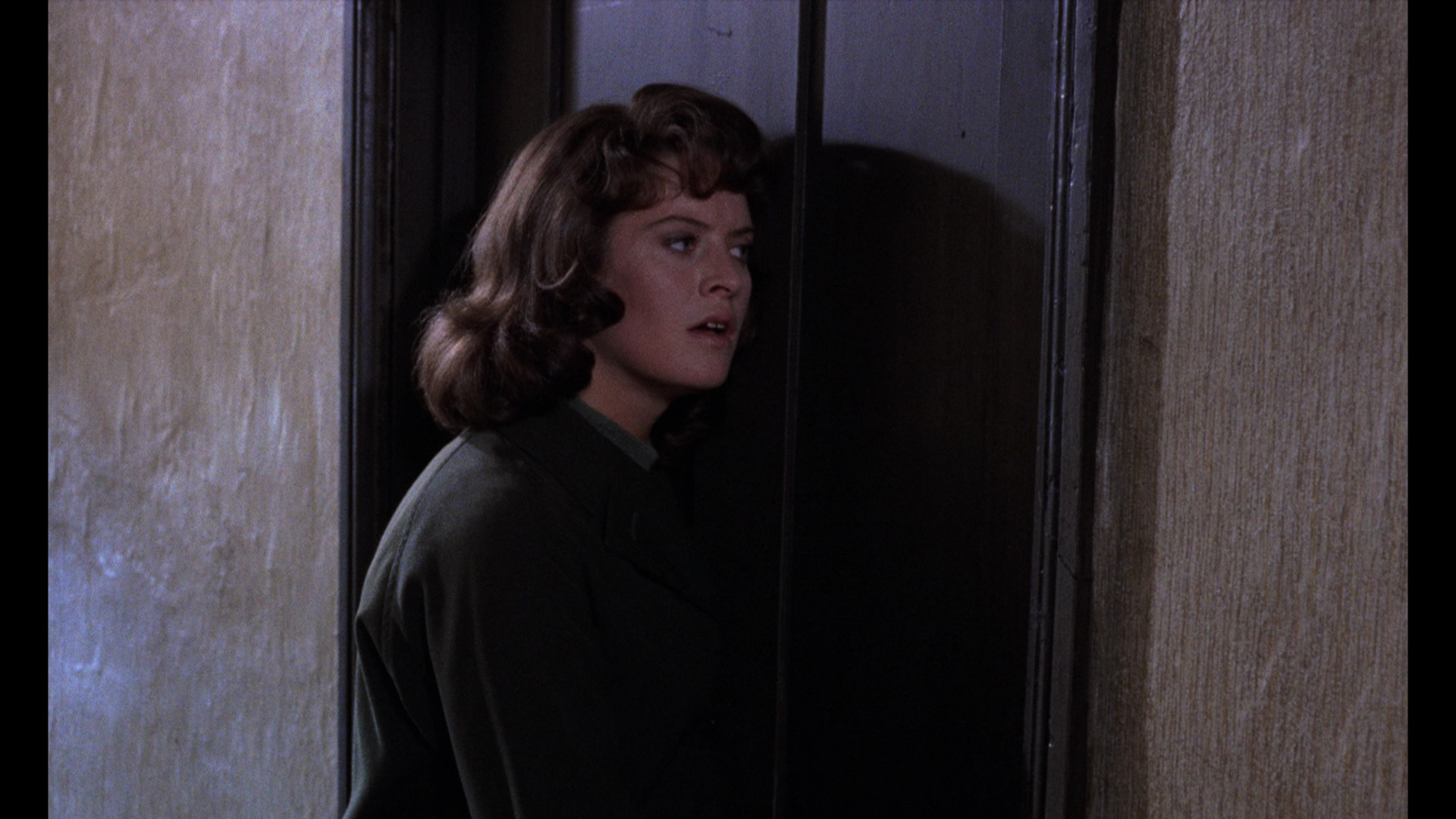 Though he was largely known in the heyday of Hollywood as a director of action-packed spectacles like 20,000 Leagues under the Sea and The Vikings, director Richard Fleischer had a knack for probing the darker underbelly of human nature with a particular knack for intimate thrillers. Some early examples included Compulsion and Violent Saturday, the former a sterling example of the true-crime format that he would perfect with a pair of unflinching films, The Boston Strangler and 10 Rillington Place. The latter might actually be the most chilling depiction of a real-life murderer ever put on film, painting a portrait of psychopathic behavior masked by civility and the dangers of the criminal justice system that still packs an icy punch today.

In 1940s London,  the seemingly genteel, middle-aged John Christie (Attenborough) has developed a terrifying pastime of luring women into his home with promises of medical remedies and murdering them instead, often via drugging and strangulation. His wife, Ethel (Heywood), has no idea of his activities, which take on a fateful turn when new neighbors move in upstairs at Rillington Place: pregnant Beryl Evans (Geeson), her illiterate husband Tim (Hurt), and their baby daughter, Geraldine.  Financial issues have the couple considering an abortion, which Christie says he can provide discreetly – but soon Tim is hurled into a nightmare he can barely even comprehend.

The facts of the Christie case have been common knowledge for decades, especially in Great Britain, but it’s best if you go into this film knowing as little as possible. 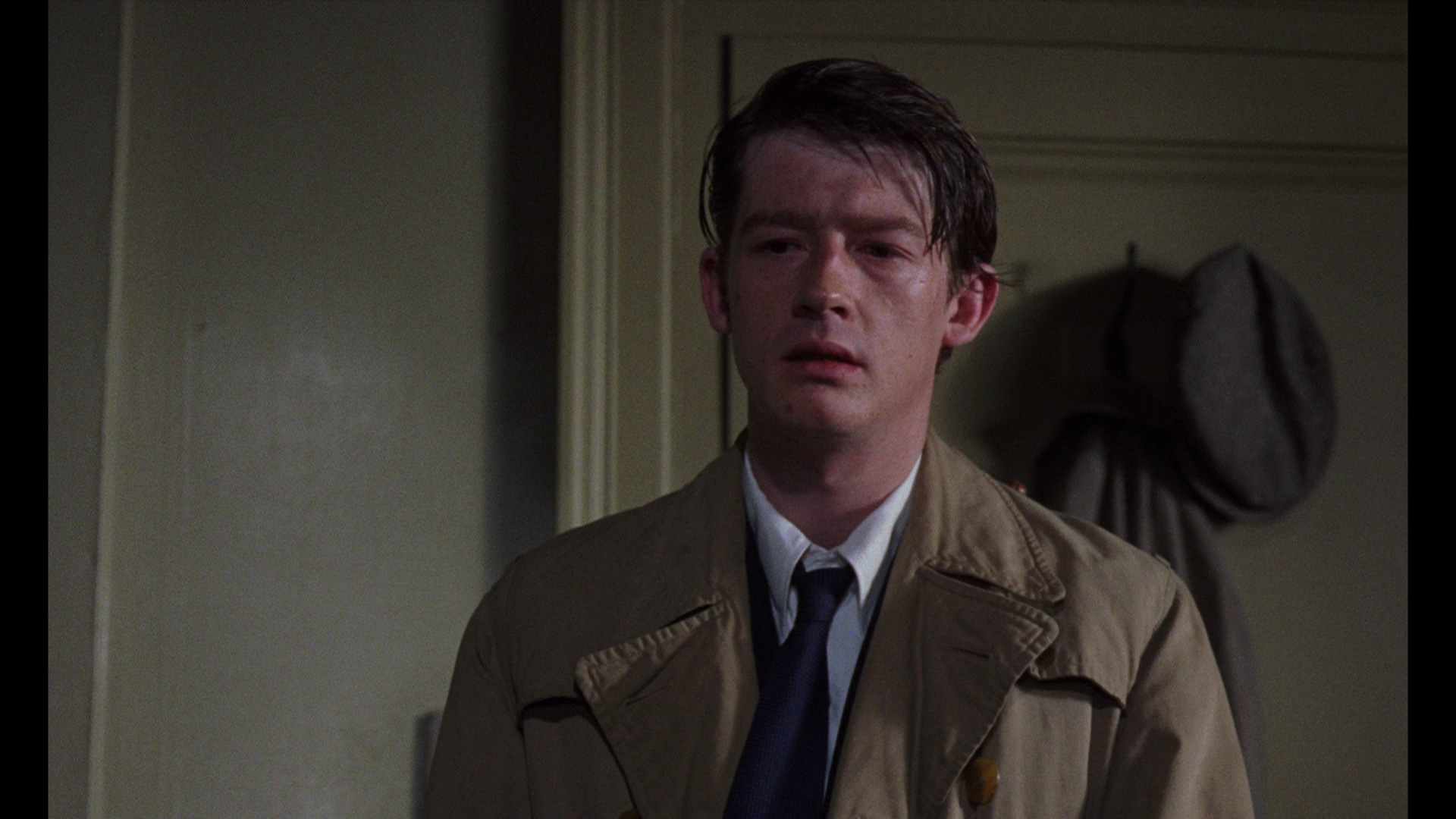 Attenborough is absolutely terrifying as an all-too-believable maniac. The use of courtroom interrogations and an opening murder sequence leave no doubt about who the real culprit is, but the terror lies in watching it unfold in the worst way possible with several grim turns that wouldn’t have been possible with the Production 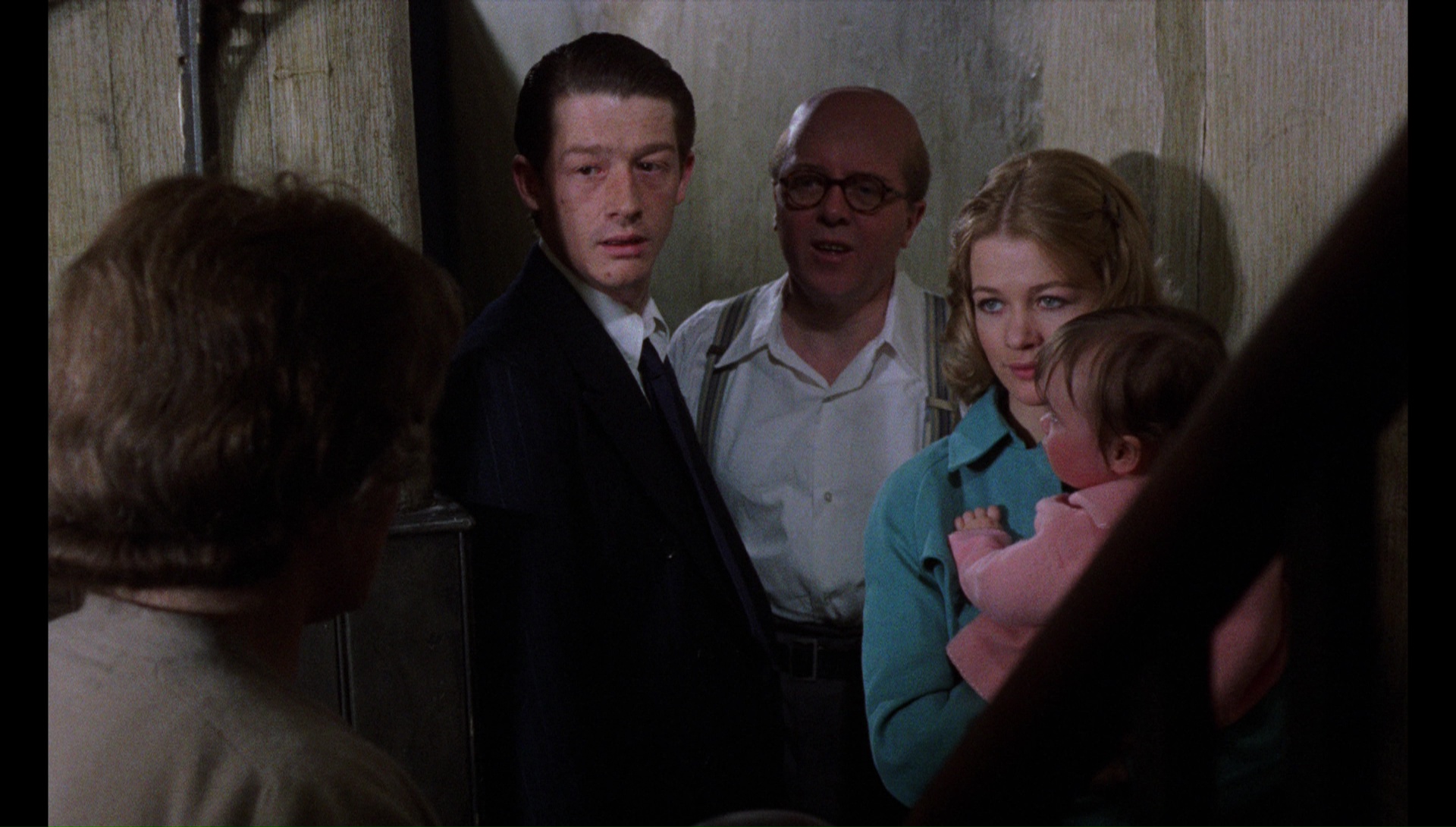 Code in effect a few years earlier. The dark, kitchen sink atmosphere is almost another character in the film as well, with the real Rillington Place serving in exterior shots and convincing studio sets doing the rest of the work.

Despite its wide availability on VHS, 10 Rillington Place wasn’t treated terribly well in North American on home video in the DVD era until a halfhearted MOD release from Sony very late in the format’s history. In the UK it fared better, with a pretty solid special edition including a fine audio commentary with John Hurt who manages to keep his solo chat going nonstop for the entire running time. He starts off by praising Fleischer and the film’s French New Wave influence before covering the real-life facts of the cast, the location shooting, Attenborough’s demanding bald makeup, and the surprising logistics of the hanging sequence, which had to be pulled off with a fair amount of legal maneuvering. Twilight Time brought the film to Blu-ray for the first time in early 2016 with a solid edition sporting a striking but accurately grungy HD transfer supplied by Sony, with extras consisting of the Hurt commentary, an isolated score track spotlighting the minimal but effective music by John Dankworth, a new audio commentary with Geeson, Lem Dobbs, and label head Nick Redman, and the original trailer. 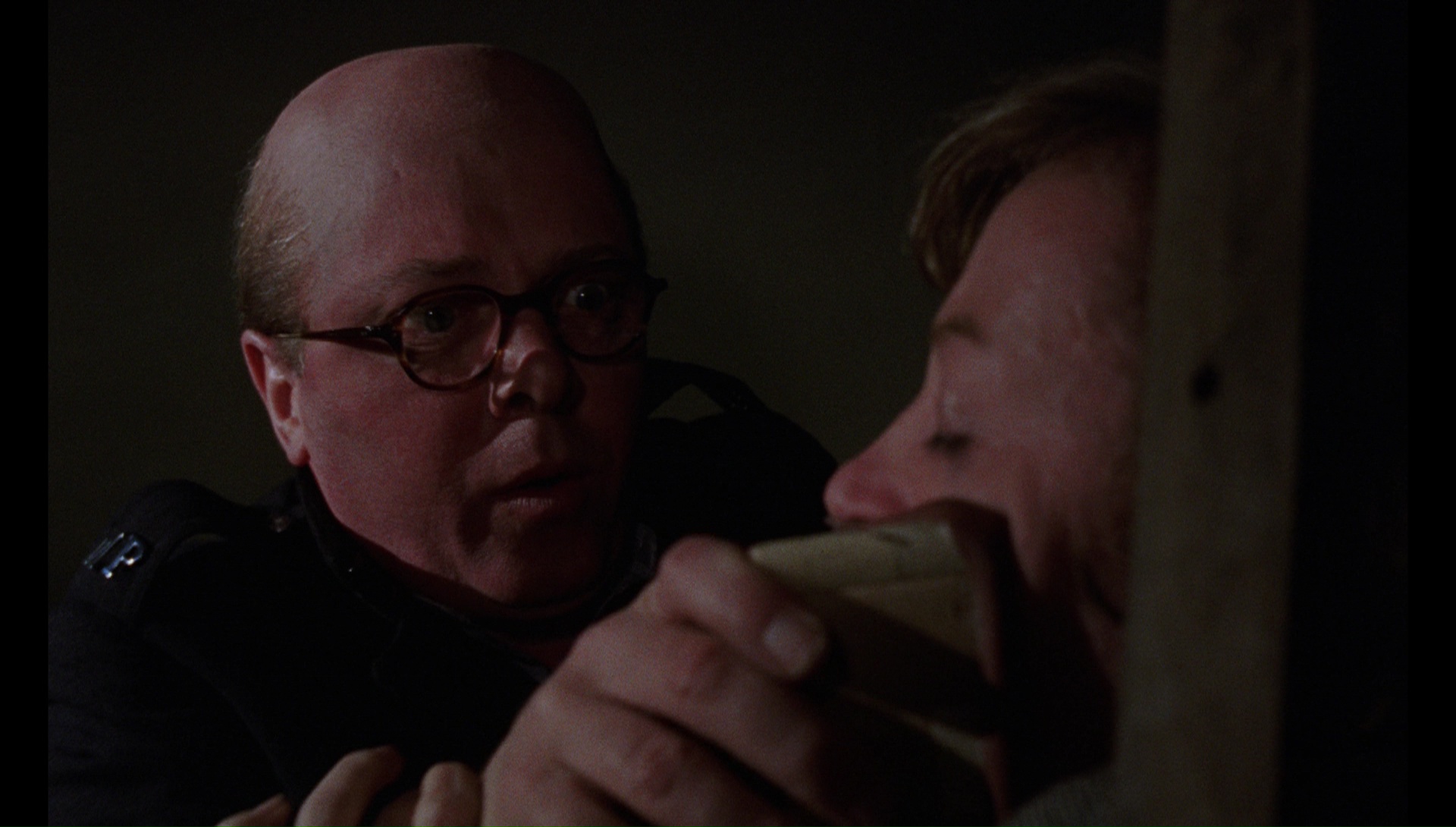 An even more robust special edition popped up as a dual-format Blu-ray and DVD at the tail end of 2016 in the UK from Indicator, whose track record of hefty bit rates and expanded extras continues here with a pleasing presentation that gives the often dark and grainy film as much breathing room as possible. Both commentaries are carried over along with the trailer and isolated music track, plus welcome new improved English subtitles for the DTS-HD MA English mono track. A new 22-minute Fiction Factory featurette, “Being Beryl,” brings back Geeson for a further dive into the making of the film and its quest to make the presentation as “raw” and realistic as possible for an enjoyable shoot with a great deal of admiration for Fleischer. A 22-minute interview with the late Attenborough offers a snapshot of his career at the time including his then-fledgling directorial career, his thoughts on capital punishment, and the extensive amount of research he undertook including meeting several of the people involved in the real case. A quick (under 2 minutes) intro by Attenborough is also included on the release about his pride with the finished product, which comes packaged here with a typically dense and informative booklet.