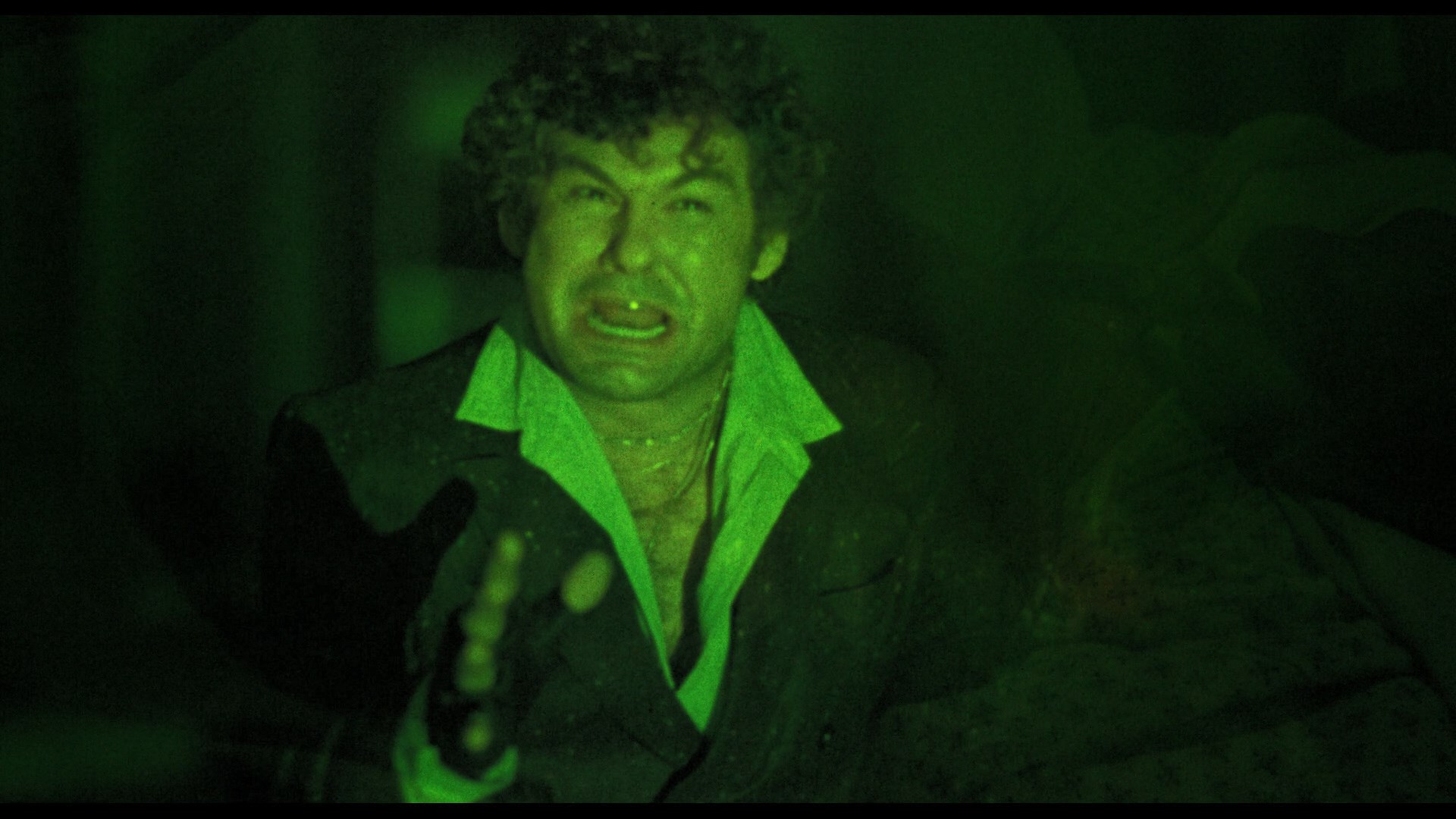 Direct from the height of the music video craze comes this gaudy tale of possession and dismemberment, an entertaining oddity that haunted VHS shel 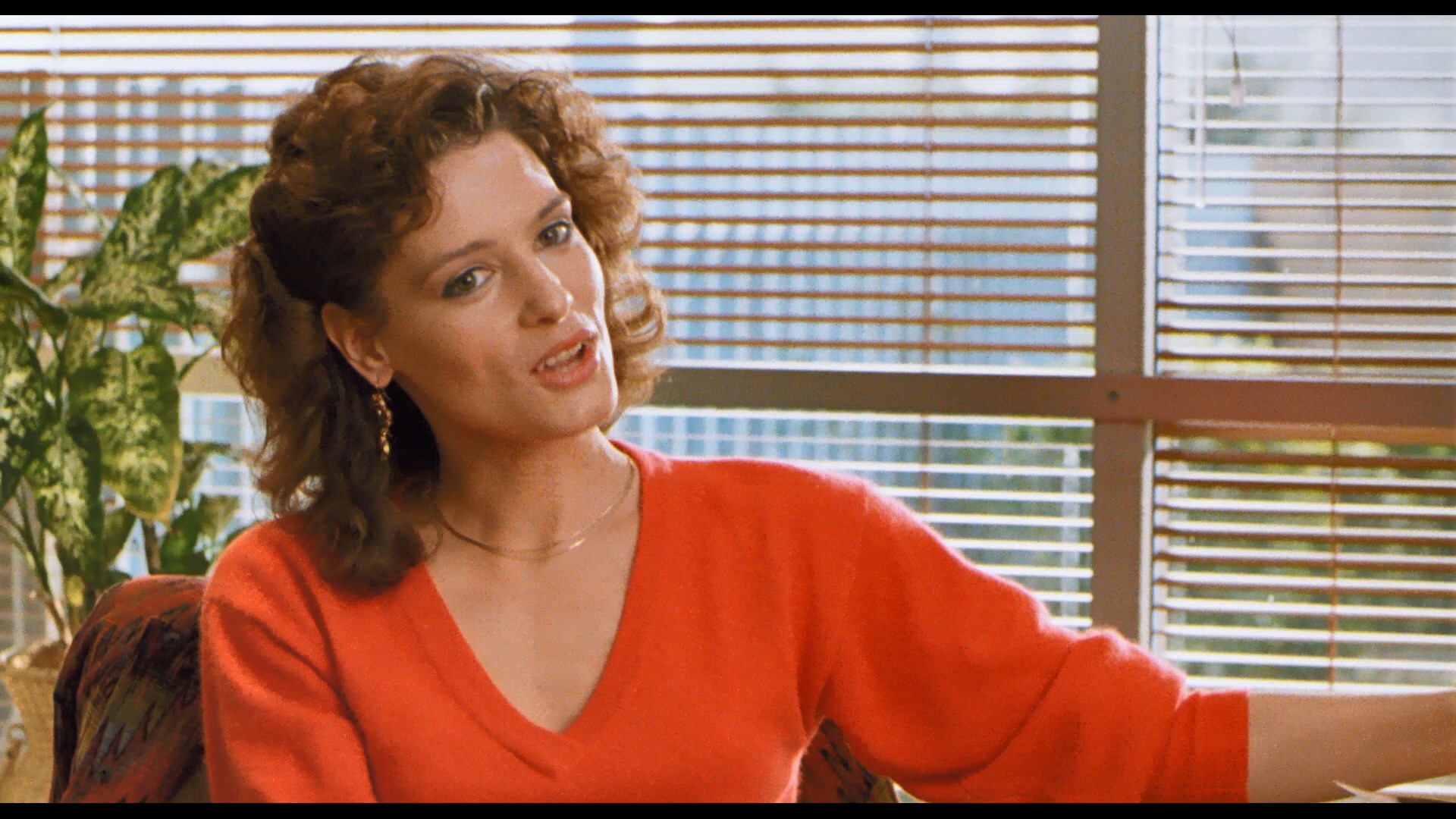 ves for years and startled many viewers with its outrageous color schemes and bizarre death scenes.

The story is simple: on Halloween night, police cars speed through the streets to find costume onlookers at a building where a jumper is about to take the big plunge. George Miller (WarGames' Lipscomb) just wants to end it all, but when he falls several stories and hits the ground, he doesn't die. In fact, a strange green-hued force seems to enter him, and as time passes, George is tormented by dreams involving a man being brutally gunned down by four faceless people. His psychiatrist, Jennifer (Wing), gets him back on his feet enough to reenter society, but he soon suffers a nightmare in which his eyes turn green and he compels a woman to disembowel herself with a kitchen knife. The next day in the newspaper, he finds out that's exactly what did happen -- and Jennifer's doc boyfriend, Alan (Pomerantz), thinks George might be more than just a damaged soul. Meanwhile George does a little detective work and finds out that another man in town was murdered at the same moment George tried to kill himself...

That plot might sound like your average episode of Tales from the Crypt, but this film is so soaked in neon-heavy '80s style that most viewers won't care. The murder sequences are all strange and inventive enough to 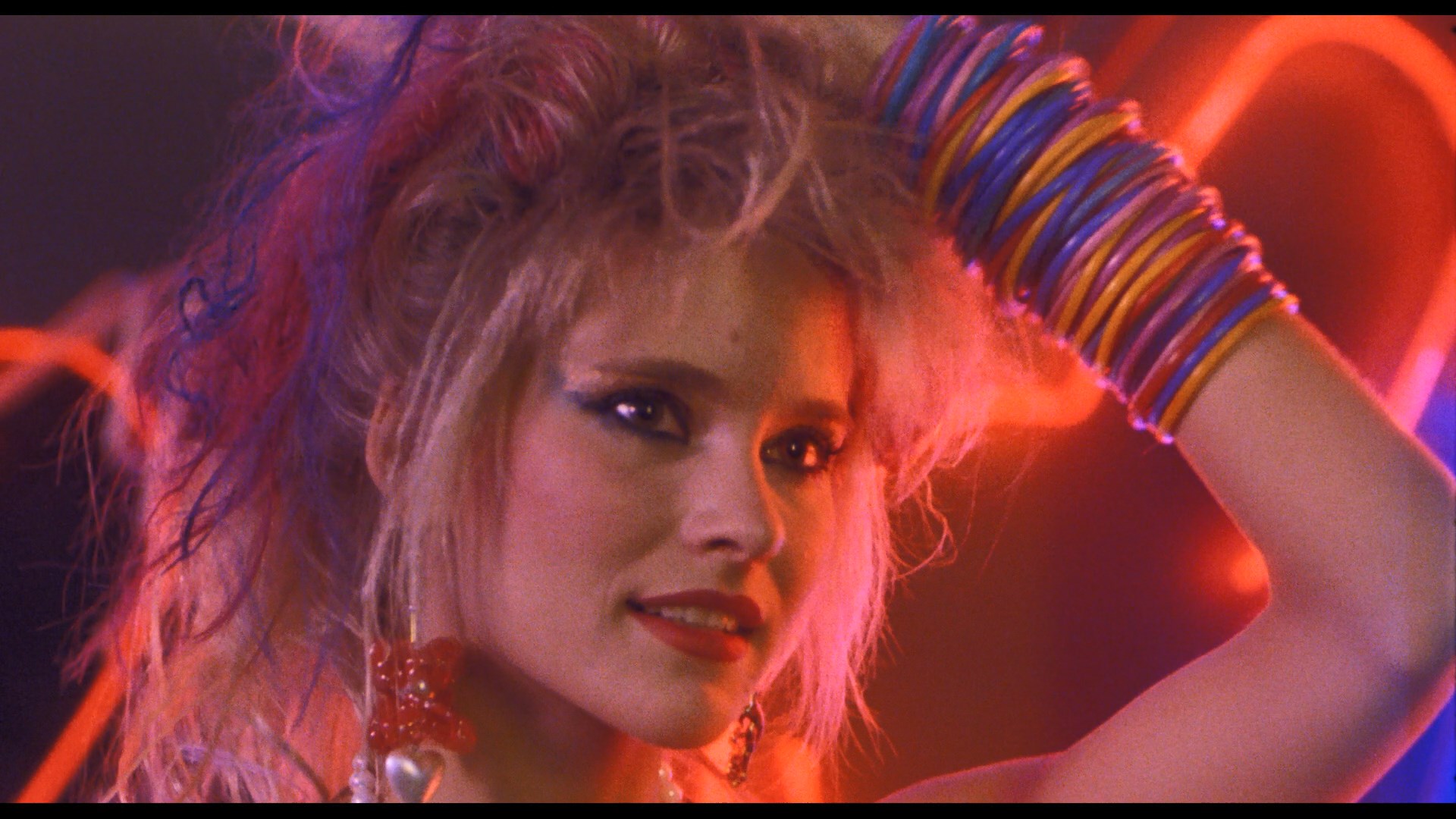 catch the attention of any horror fan, especially a surreal vignette involving a huge pig's carcass at a meat processing plant, and Lipscomb does well in a rare leading role different from his usual TV work. The script itself doesn't quite 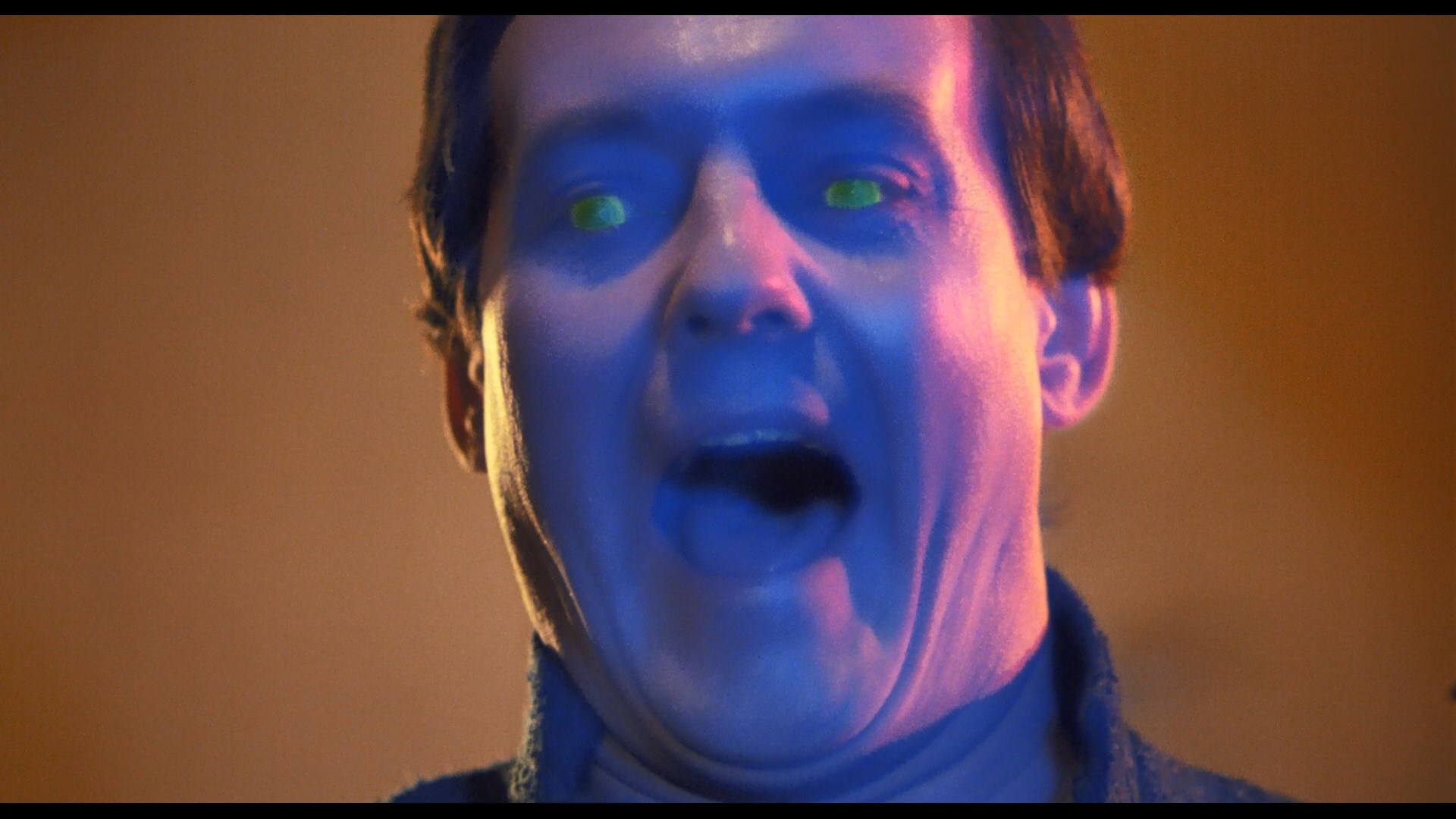 hold together as some characters get far more developed than others; glorified guest star Hoyt Axton (fresh off of Gremlins) basically gets to phone in his appearance as a cop, while the victims don't really get embellished at all due to the structure of the story. That hardly matters though considering this is basically designed as a drive-in thrill machine, delivering plentiful eye candy with a caffeinated synth score by Alan Howarth (in between in his work with John Carpenter on Big Trouble in Little China and Prince of Darkness). The opening sequence is especially effective in this respect, a rapid-fire montage of swirling police lights, creepy Halloween masks, and pounding electronic music.

Barely released theatrically in the US by Taurus, Retribution was widely distributed on tape by Virgin in the late '80s in an R-rated version with slight trims made to three of the most violent scenes. The uncut version popped up on tape in Holland, but most countries only saw the standard R-rated cut. A special edition was first announced from S'more Entertainment in 2011, but that was soon scrapped; instead, a 2012 DVD from Code Red was released in time make it a 25th Anniversary Edition. 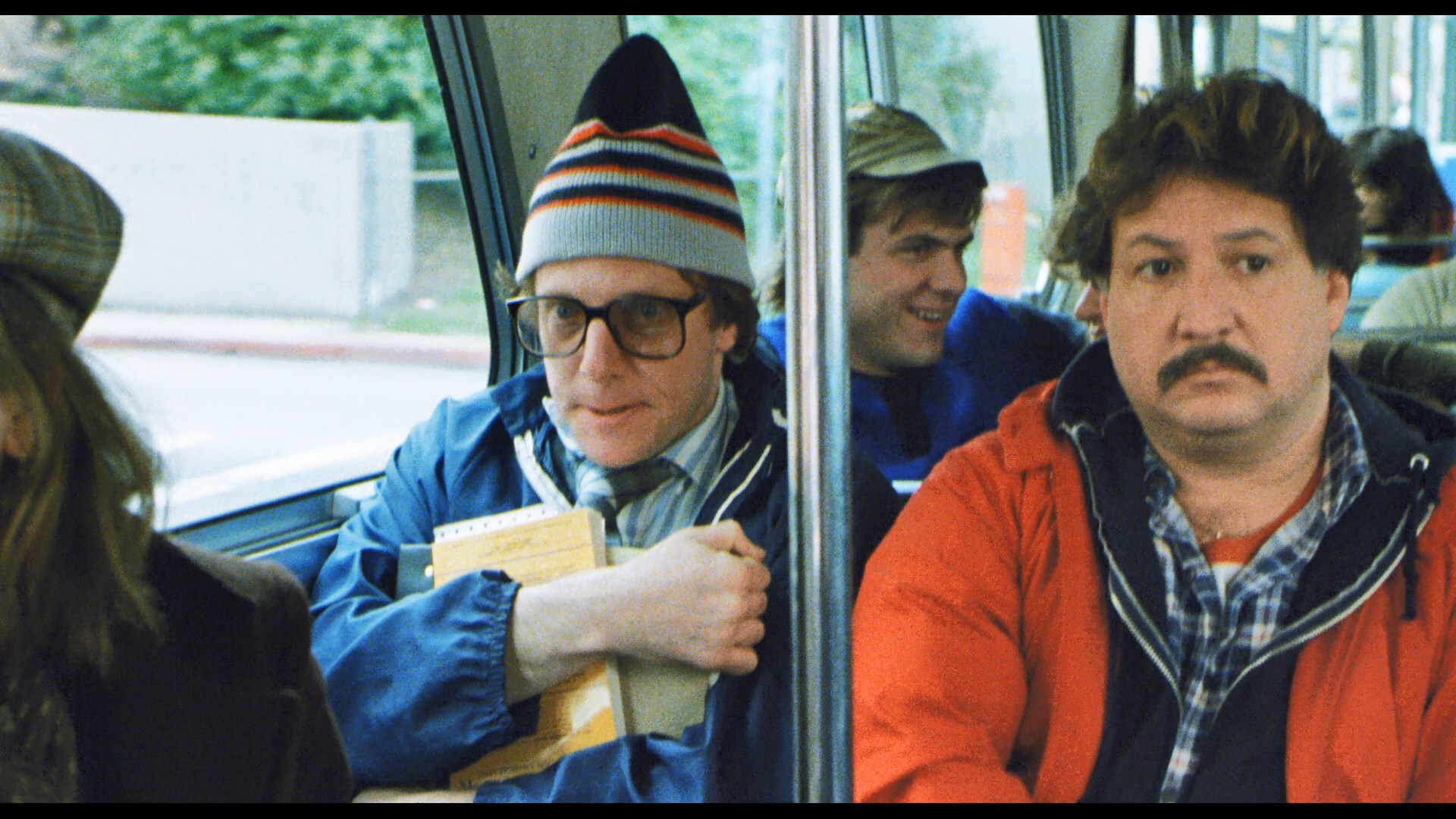 The transfer of the feature itself looks terrific, rendering those crazy color schemes with much more fidelity than VHS could ever capture. The restoration of the 1.78:1 framing also helps a great deal, matting away some extraneous head room and balancing out the compositions more effectively. The Dolby two-channel stereo track also sounds good, mainly focusing on the music and some of the more extreme sound effects during the paranormal sequences. 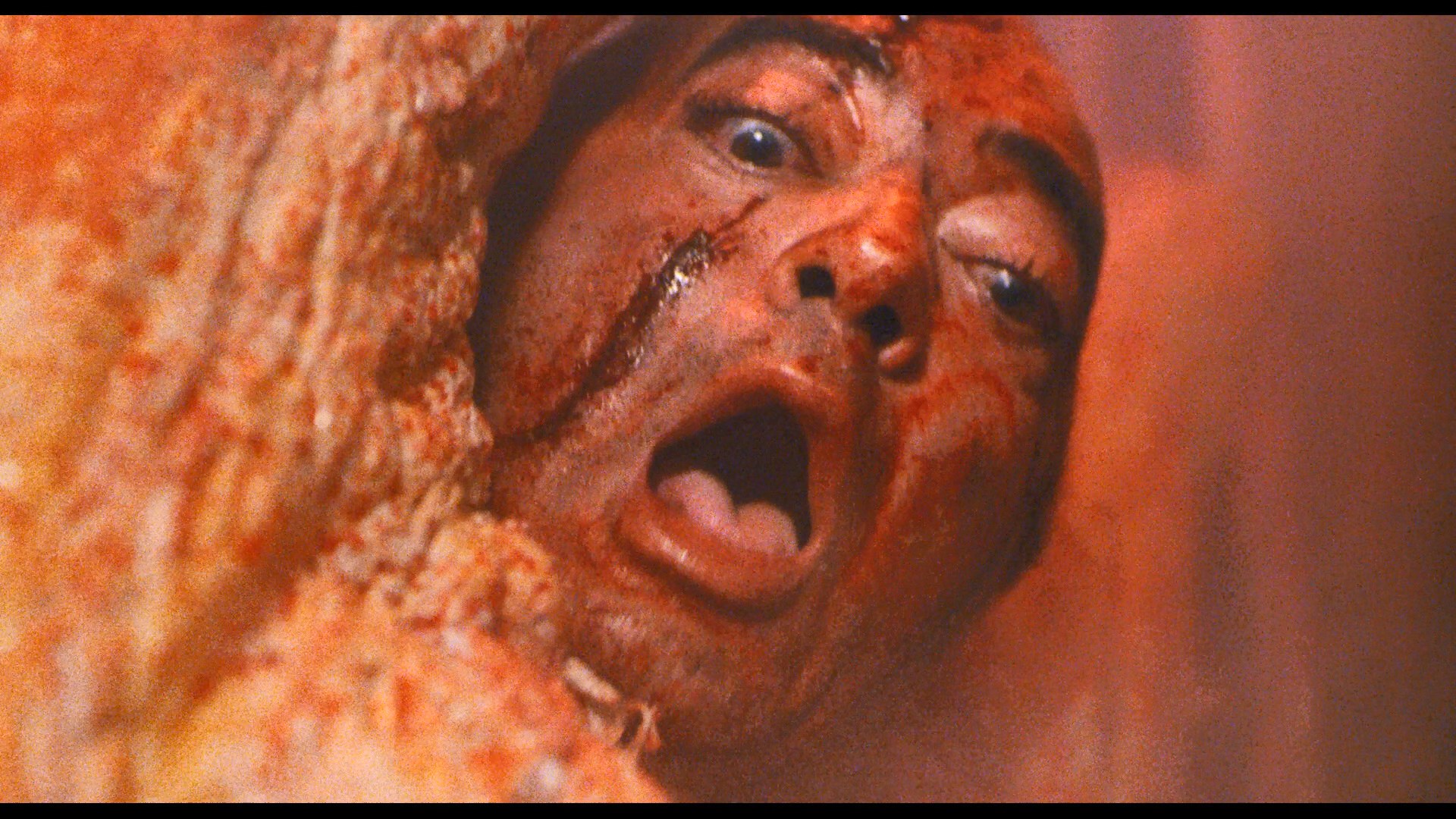 The usual R-rated version is used for the main attraction, but the extra gore footage is also included as a bonus reel (about seven minutes since the murder scenes run in their entirety). Surprisingly, the quality of these full frame bits is very good, too; this isn't a lackluster videotape port here. Some of the extra shots are pretty astonishing, including an extended hand removal via blowtorch and more of that insane butcher scene. On top of that, Magar contributes a commentary track that's... well, let's just say if you can't tell someone's walking through a door, he'll certainly point that out. He really gets into a blow-by-blow description of the film (even calling that butcher murder one of the greatest sequences in horror history), but there are also some informative bits: pointing out his cameo as a cab driver, explaining the freaky glowing eye effects, and talking about the mood he wanted to set with some of his shot set ups. The "Original Trailers" option leads to a VHS-sourced theatrical trailer and what looks like a distribution promotional reel, along with a (brief) photo gallery and bonus trailers for The Last Chase, Family Honor, Mardi Gras Massacre, and Nightmare. As with some of the label's other recent titles, this one is sold directly through their site instead of retailers. 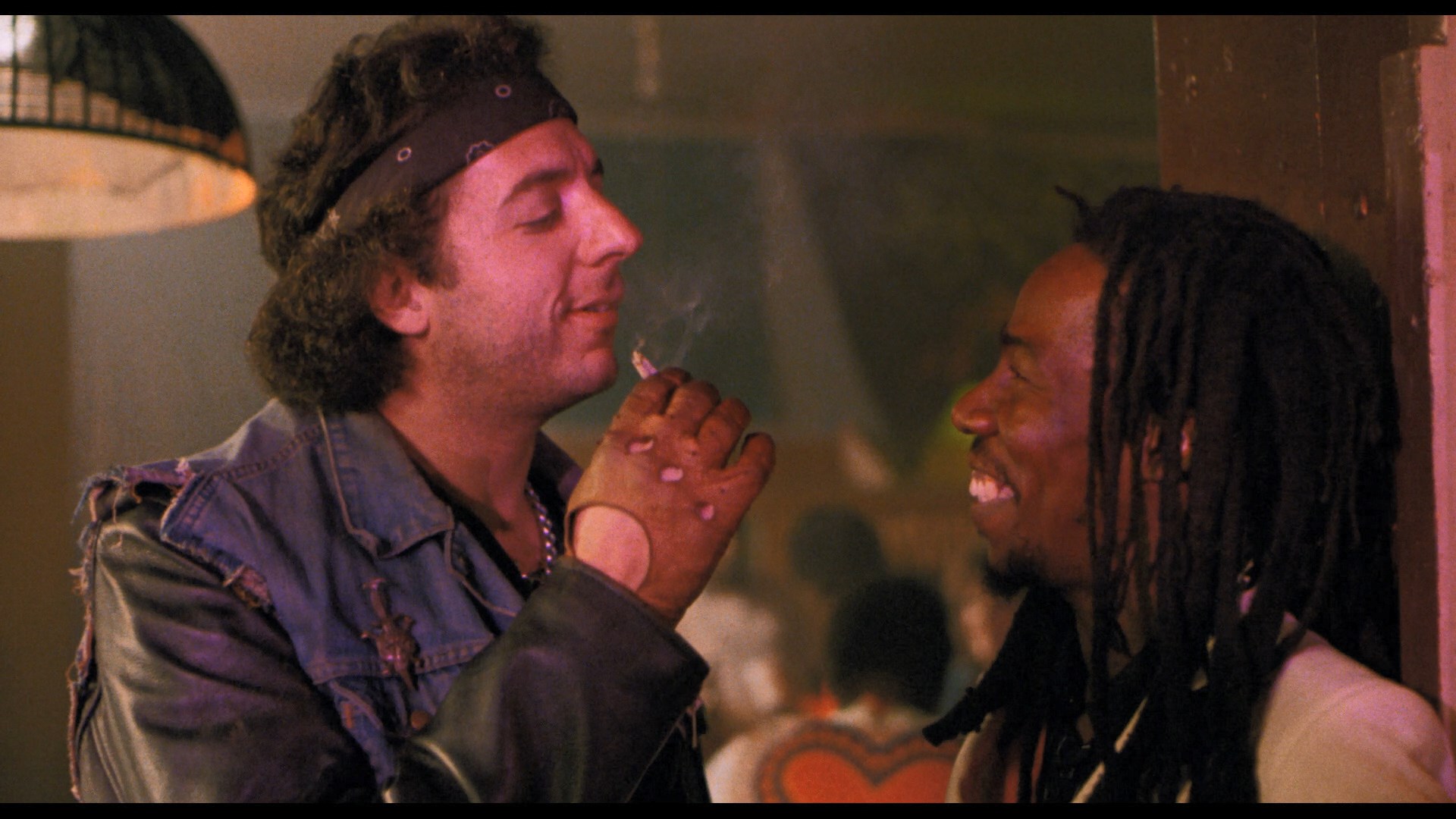 In 2015, the film got a Blu-ray upgrade from Code Red sold exclusively through Screen Archives as a limited 2,000-unit edition. The DVD was obviously pulled from the same HD master but as you'd expect from a 1080p rendering much closer to the source, those eye-popping blasts of red and lime lighting really shine through here thanks to the higher resolution and better color fidelity. Framing and element quality are identical, while the grain and detail bump up a few notches in terms of clarity. All in all, it looks pretty sweet in motion and should make fans happy. The DTS-HD stereo audio sounds strong but is obviously hampered by the limited nature of the original mix, while the most substantive extras, the audio commentary and bonus gore footage, are carried over as well.