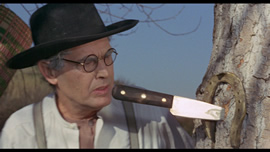 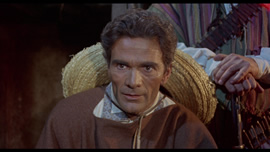 Made at the height of spaghetti western mania, this unusual offering from director Carlo Lizzani came on the heels of his biggest international release, the MGM-distributed The Hills Run Red, so it made sense for him to return to the Wild West again in between in his run of solid cirme films like Wake Up and Die and The Violent Four. What's surprising is that he also turned the project into a politically-charged art film, as much a study in clashing ideals as an indulgence in shoot outs and saloons.

Lou Castel (A Bullet for the General) stars as the title character, so named for his tendency to pray over the bodies of the dead. That trait's been picked up from the Quaker family that raised him after he was found wandering in the desert following the slaughter of his Mexican village at the hands of nefarious Confederate officer George Ferguson (Black Sabbath's Damon, looking eerie and pasty-faced here) and his men. Requiescant is forced to confront the demons of his past when his adopted sister, Princy (Frey), runs away with a theater troupe and ends up in San Antonio as a prostitute under Ferguson's thumb. Fortunately the peace-loving Requiescant turns out to have an affinity for gun slinging and knife throwing, which pits him against the forces responsible for destroying his childhood.

The very violent opening sequence might set up expectations for a rip-roaring action revenge film, but 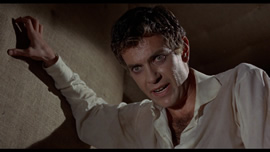 Requiescant has a bit more on its mind with the hero's 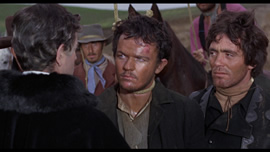 journey mirrored by frequent injections of revolutionary rhetoric and anti-fascist philosophizing. That shouldn't be too surprising since the film features one of the all-time great Italian directors, Pier Paolo Pasolini, as a revolutionary priest, one of the rare occasions he acted in a film directed by someone else. Also in the cast are a pair of familiar faces from Pasolini's films, Franco Citti (as the villain's right hand man) and a young Ninetto Davoli, Pasolini's muse and companion. Castel's also a peculiar but fascinating piece of casting, a long way from the stoic tough guys played by Clint Eastwood and Lee Van Cleef as he smacks a frying pan against his horse's rear end to keep it galloping.

Never given an official U.S. theatrical release, Requiescant made the rounds through Europe and Asia sometimes in English-dubbed form as Kill and Pray, the title used for Wild East for a very limited 2005 release with a so-so, non-anamorphic transfer. Far better is the 2015 edition from Arrow Films simultaneously released in the U.S. and U.K. containing a fresh, vivid new transfer from a 2K scan of the original negative. It's gorgeous and very natural looking with highly impressive textures throughout, and the 1.85:1 framing looks perfect. Both the English and Italian tracks are included, and honestly it's a bit of a toss up as to which one is better. Damon speaks all of his lines in English (albeit dubbed), while the rest of the actors are speaking Italian or something else entirely that matches neither track (or, in a few cases, Spanish). Optional English subtitles are provided for the Italian track, along with an SHD subtitle track for the English dub. Both tracks sound excellent, so try them both and see which one you prefer.

As for extras, Castel appears for a new 13-minute interview (in 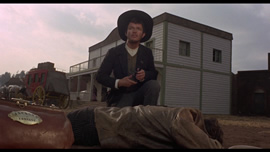 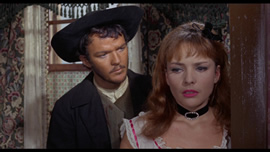 political statements in film, his choice to turn from acting to activism at the time, his work on the wonderfully nuts Matalo!, the anarchist script that transformed with the arrival of communist sympathies behind the camera, and the "Chaplinesque" element he added to his part. A 27-minute archival interview with Lizzani conducted for Koch Media by Freak-o-Rama for the 2012 German DVD is also included, in which he runs through his entire career from early days in neorealism and the process of casting and shooting this film, for which he tried to cast actors who had "resonance beyond behind a movie star" with connections to the cultural battles being waged at the time. Finally the package rounds out with the 3-minute dialogue-free trailer (which only uses the score by Riz Ortolani), the usual reversible artwork featuring the original poster art and a new design by Gilles Vranckx, and an illustrated booklet with a liner notes essay by Pasquale Iannone.