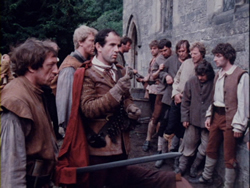 First of all, in case you were wondering, a "redshift" is a physics term 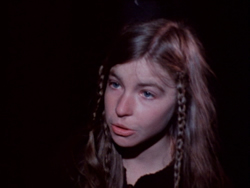 for an object's increased wavelength, be it a sound or even a galaxy appearing to change as it approaches or recedes. It's a catchy title for this fascinating BBC mixture of sci-fi and fantasy originally aired in 1978 as part of the series Play for Today, adapted from a novel by Alan Garner (perhaps most famous as author of The Owl Service).

The redshift here relates mostly to Tom (Petcher, a dead ringer for a young Michael Sheen), an astronomy student saddened by the imminent departure of his girlfriend, Jan (Dunlop). While out for an afternoon in the Cheshire countryside, they discover a path through a desolate village, Barthomley, eventually leading to a mysterious hill called Mow Cop marked by a decaying tower. There they discover an ancient axe head made of stone wedged into the stone and choose it as a symbol of their bond -- which may not be as strong as they think. Their experience triggers two other interweaving stories about young people caught in the forces of history: in the era of Roman Britain, unofficial leader Logan (Hutchison) guides a group of deserting soldiers through the same area and contends with the unstable but physically useful abilities of Macey (Byatt) and an unnamed mystical girl (Lisztomania's Quilligan); and during the English Civil War, Thomas (Bolton) and Madge (Frances) are torn apart by his inexplicable psychic fits (which seem to be tied to the other two time periods after he finds the same axe head) and the provocation of the locals including her ex-suitor.

Red Shift is especially interesting today as an ambitious, rewarding TV work by Scottish filmmaker John Mackenzie, who started off working for Ken Loach and directed the superb, undervalued thriller Unman, Wittering and 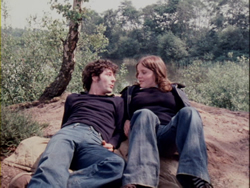 Zigo in 1971. Today he's best known as the director of the 1980 crime classic The Long Good Friday, and his sure hand is in evidence here as he makes a sprawling, challenging narrative compress nicely into an hour and a half. Most of the actors are familiar from TV fare of the era, with Hutchison (Straw Dogs) perhaps standing out the most the same year he starred as Heathcliff in the solid BBC miniseries version of Wuthering Heights. 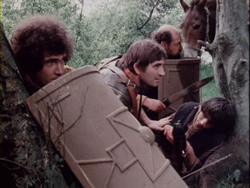 For its home video debut, the BFI presents the film in an impressive 1.33:1 transfer on DVD with sharp detail given the usual film stock the BBC employed at the time. Thankfully the original 16mm film elements were used rather than the videotape copy used for broadcast, which means this restored version is substantially more impressive than what was seen by viewers in 1978. The audio is also very clear with optional English subtitles, and a trio of solid video extras have been added as well. 1972's "One Pair of Eyes: Alan Garner - All Systems Go" is a fascinating 40-minute interview with the author and a good overview of his career at the time, rendered in an appropriately odd and dreamy style. A new 5-minute interview with first assistant director Bob Jacobs and film editor Oliver White covers some of the basics of shooting on location in Cheshire and weaving together the three different timelines, while 1980's "Spirit of Cheshire" offers a 20-minute tour of the area with a Rolls-Royce Silver Ghost (voiced by the great Michael Hordern, of all people) offering a framing device. The package also includes the usual robust booklet with new essays by David Rolinson (who thoroughly covers the film's history , source novel, and color symbolism), Michael Brooke (a Garner bio), a brief new piece by Garner about the novel's inspiration, Sergio Angelini (a Mackenzie bio), and Paul Vanezis and James Blackford (notes on the bonus features).