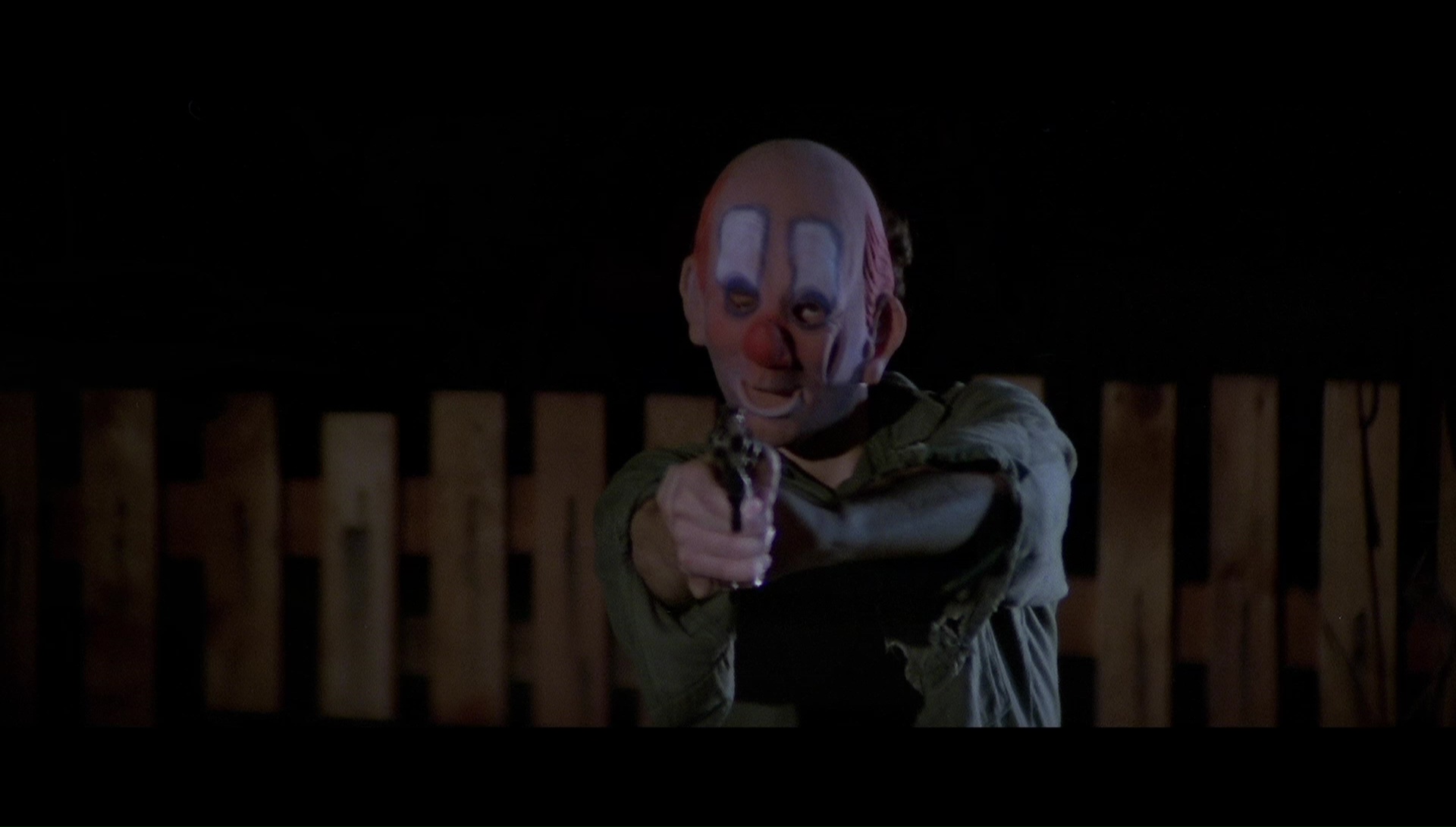 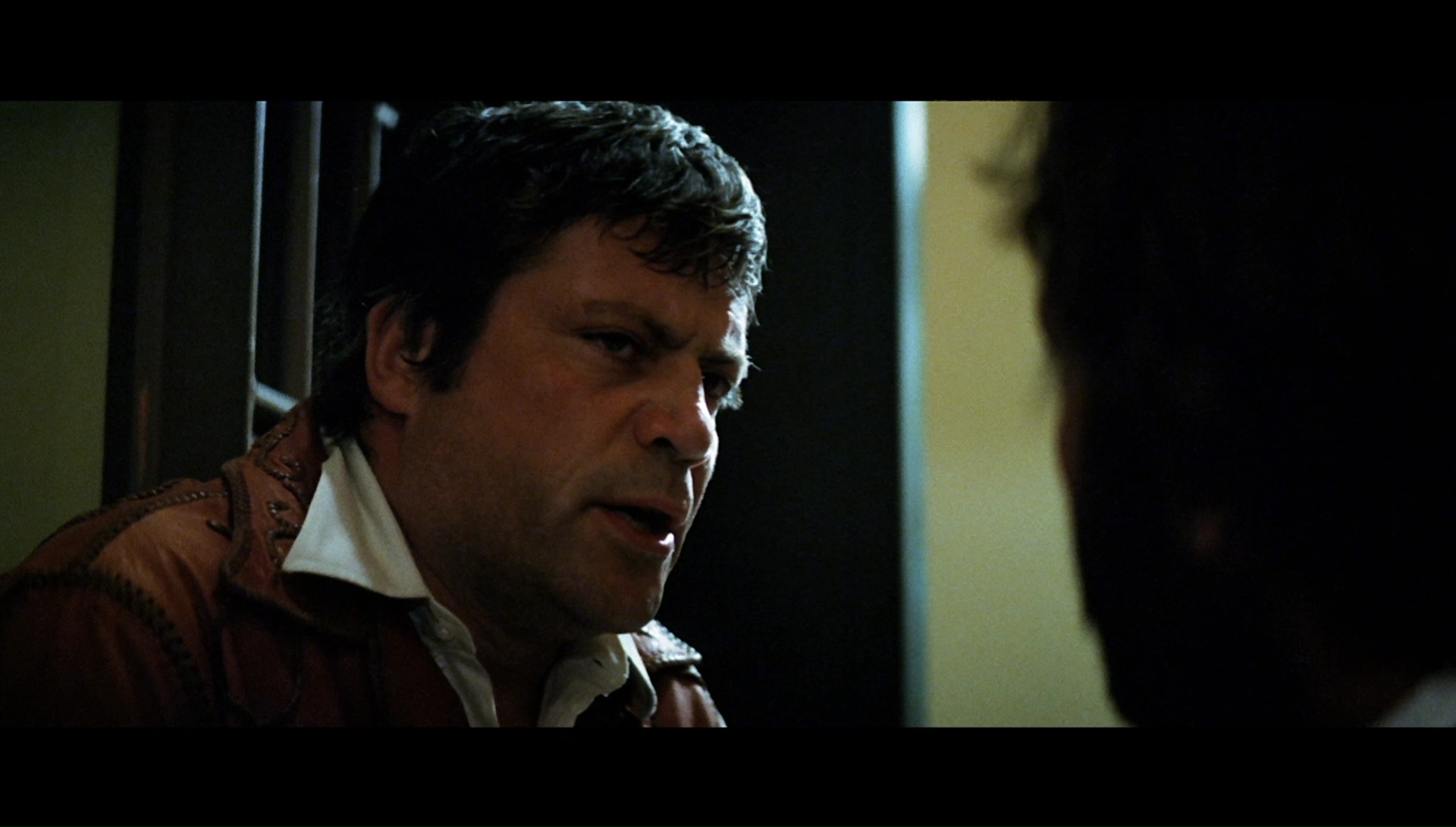 The wide array of titles this film has racked up over the years should give you an idea of how tough it is to classify. Is it socially-conscious action film for the drive-in crowd? A taut suspense thriller with noir touches? An early precursor to the slasher movie craze? The answer is all of the above, yet New World Pictures never could quite figure out how to plant this one permanently in moviegoers’ memories.

In a dusty Arizona town, someone’s terrorizing the populace with a turbo-powered crossbow. As we quickly learn, the culprit is a Native American named Victor (The Omega Man’s Koslo) with a major grudge against society, so after plating arrows in a couple of cops, he’s now demanding a million-dollar cash drop or else the rich fat cats around town will all wind up skewered to death. One of the potential victims, William Whitaker (Whitman), brings in a mercenary named Nick (Reed at his absolute best and booziest) to take care of the situation, which leads to the involvement of reporter Cindy Simmons (Raffin) and hard-bitten Tracker (Mitchum) when the money drop takes some troubling turns and more people in town preparing for a big upcoming festival are put at risk.

Obviously there’s no way any film with that cast could be worthless. Apart from Reed (who makes this a must see all by himself), you also get John Ireland as the local police chief, a freaky score by ‘70s jazz man Don Ellis (The French Connection), a very memorable closing song called “Victor’s Theme: Shoot Him” by The Byrds’ 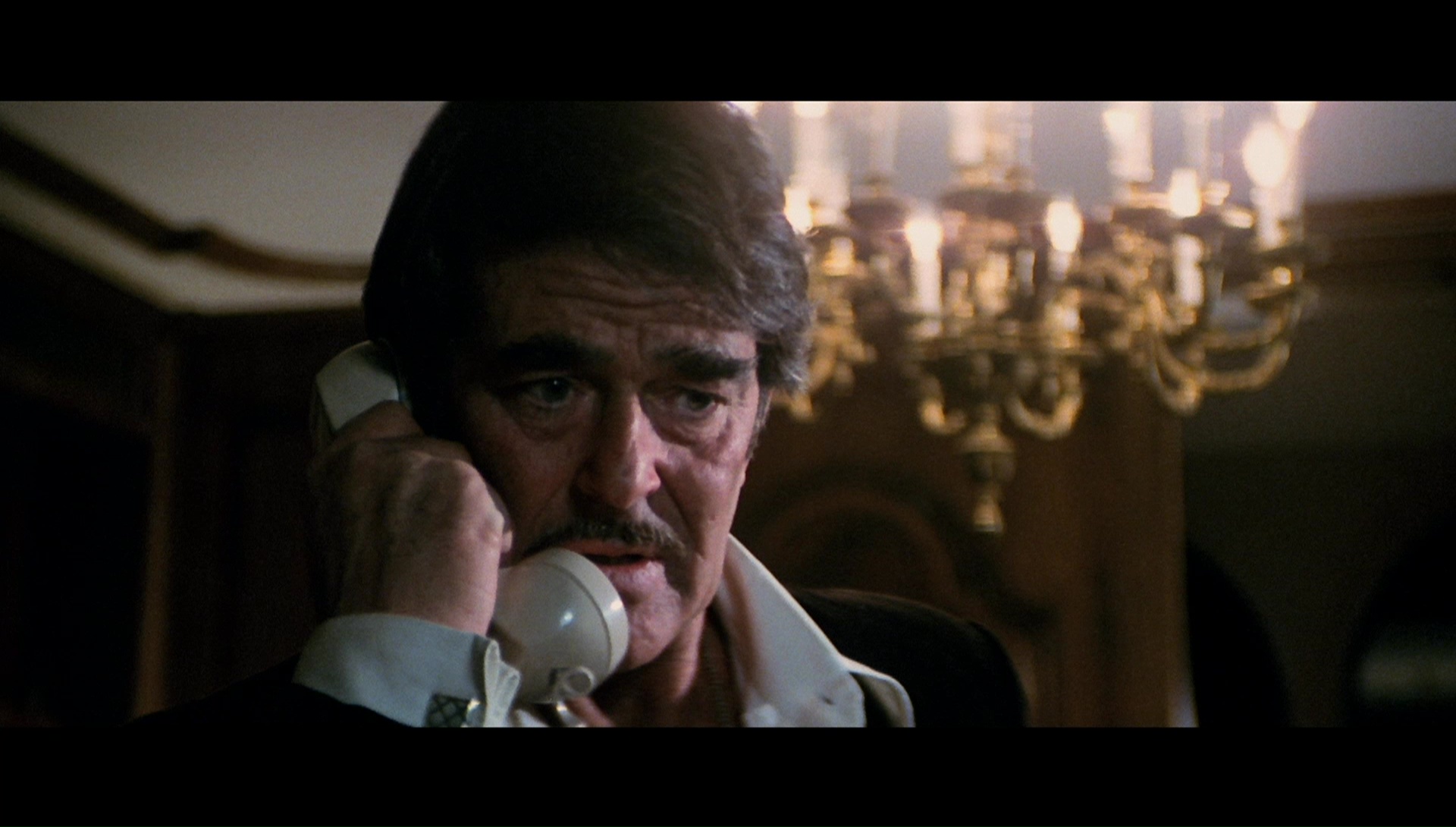 Roger McGuinn and Patrick Ferrell, and a nice feel for the location courtesy of director Richard Compton (not surprising since he also directed Macon County Line and Ravagers before moving to TV-ville). The cheap thrills here aren’t as strong as they could be; the film’s original theatrical cut was given a PG rating, which seems about right given the emphasis on suspense and action over bloodletting or sex. 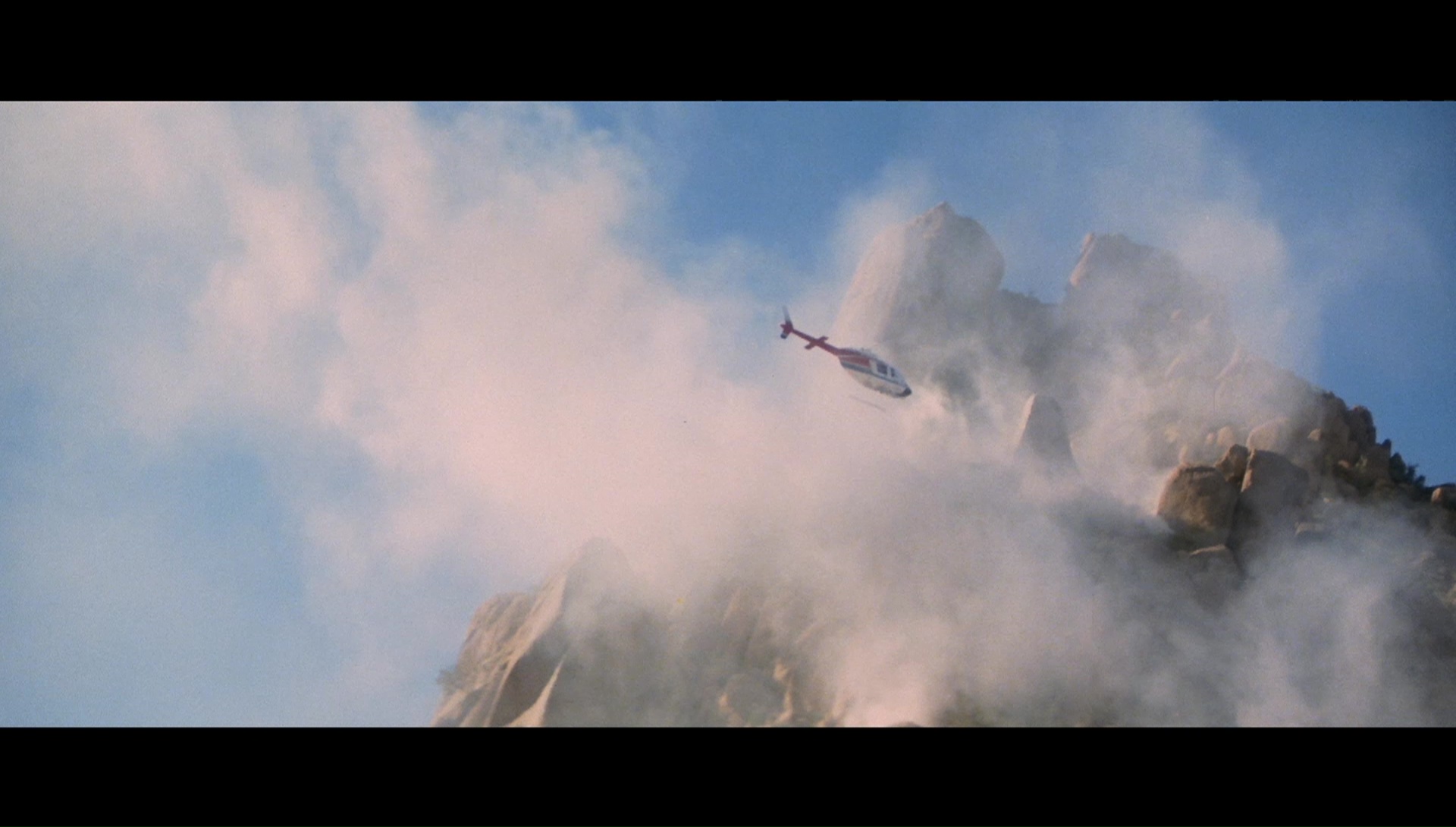 However, if you want a pulpy thriller with a hard-edged and very unique cast, it’s one heck of a way to kill an evening.

Originally shot under the title The Town That Cried Terror, this film bore that name in a few markets but was first issued as The Ransom and then Maniac! (the title used for Embassy’s brutally cropped VHS release) and Assault on Paradise, the name retained for Code Red’s DVD. To spice things up, Corman also appended a new prologue featuring a clown-masked assassin (presumably meant to be Koslo) gunning down a necking couple in a car, which was included on some Maniac! prints. That's the version you get here with the standard theatrical cut and the clown opener, clocking in at 88 minutes. Image quality is a massive improvement over anything we've had before, reinstating the original scope framing and boasting nice, rich colors and a deep, noir-ish look in the night scenes. Anyone who suffered through that old Embassy tape will be in for quite a shock. The DTS-HD MA English mono audio sounds clean and punchy enough considering the original limited sound mix. Incidentally, the film itself bears the Assault on Paradise, but the menu is branded as Maniac!

A generous slate of extras sheds some light on how this film came about, kicking off with an audio commentary featuring co-producer Peter Macgregor-Scott and Code Red's Bill Olsen. They start off trying to figure out that tacked-on opening and then 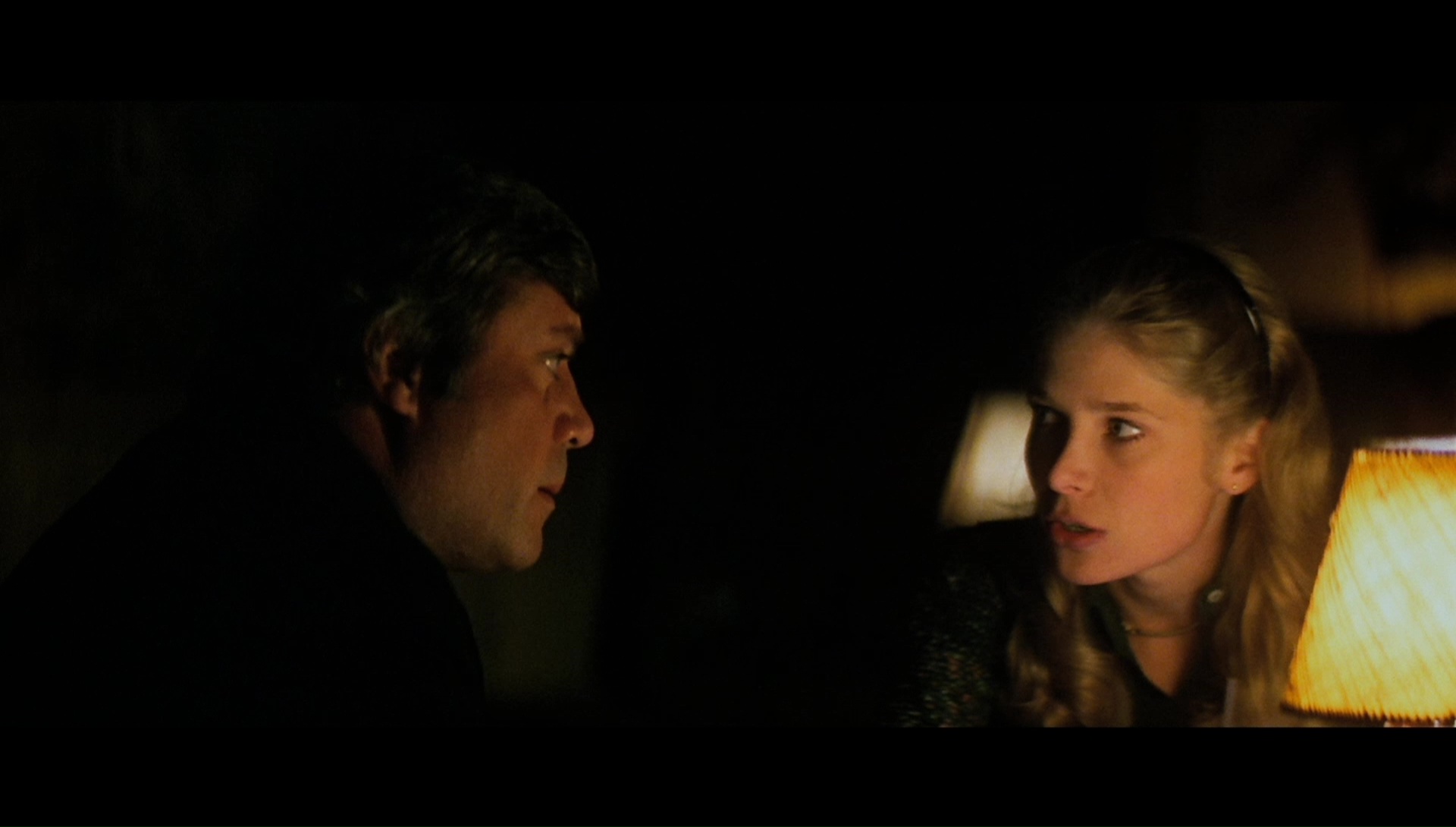 launch into a thorough breakdown of the production including Koslo's method approach to his role, Reed's usual colorful and carousing behavior, the two years it took to get the film to the screen, the scouting for actual locations in and around Phoenix, and plenty more. A fascinating 44-minute interview 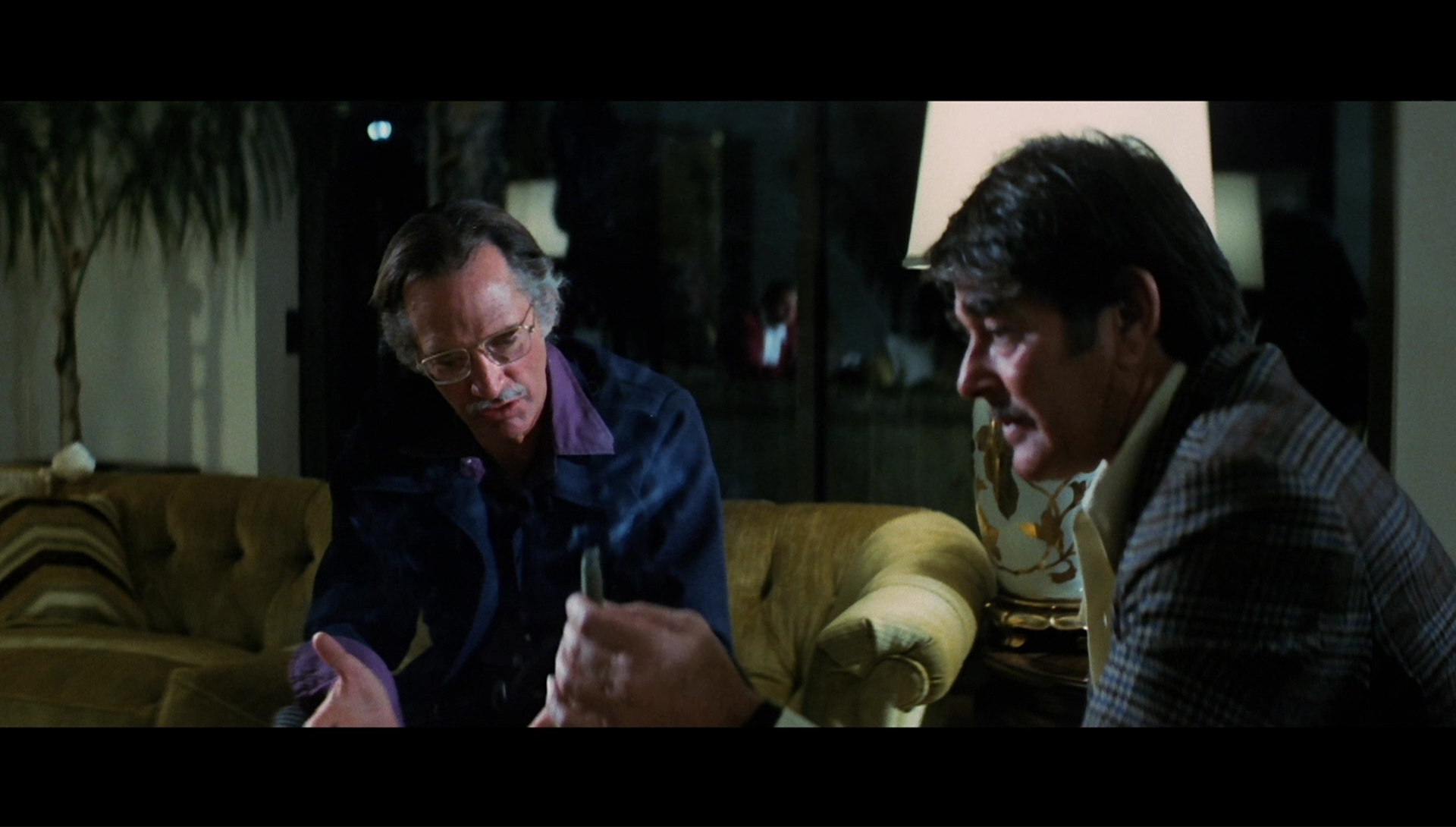 with Koslo touches on this film at the beginning but soon launches into a wild career retrospective with funny stories about gun slinging with Clint Eastwood, getting chewed out by Michael Winner, having loogie dares with Gary Busey, encountering the "beautiful" and "crazy" Oliver Reed's nightly drink binges and Winnie the Pooh performances on a couple of films, and getting fired by Peter Collinson, with films covered including The Laughing Policeman, Lolly Madonna XXX, The Stone Killer, and plenty more. This one's pretty much worth the price of the disc by itself. The second video interview spends 11 minutes with Miller Drake, who reveals how that clown prologue came about during his tenure as head of New World post-production, a tinkering practice repeated in later films like Screamers, Tidal Wave, and Humanoids from the Deep. A "Drive-In Theater Mode" options features wraparound segments with hostess Katarina Leigh Waters, dolled up in Native American gear while she covers the major credits and trivia points for the cast and crew. A theatrical trailer and alternate credit sequence spotlight the Maniac! title, and interestingly enough, these opening credits feature the "Shoot Him" song instead of the instrumental funk and whistling theme on the main version. Last but not least is an extended TV version (bearing an ITC logo and the title Ransom), running a whopping 104 minutes and featuring yet another different piece of music over the credits. It's full frame and sourced from VHS, but there's some interesting extra material here including a lot more with Mitchum (who barely registers in the standard cut), more pillow talk with Reed and Raffin, and lots of bonus bits involving Whitman and the police investigation.