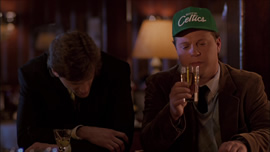 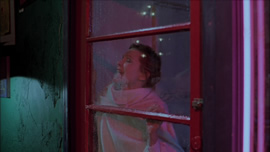 Just as Italian horror and mystery films were starting to die down in their native country, one of the most blatant American stabs at a giallo surfaced in 1990 as the initial title from Roger Corman's short-lived Califilm label (which also turned out The Unborn and Dune Warriors). Deep shadows, colorful lighting, unlikely plot twists, and a stalking gloved killer with a sharp knife easily betray the influence of Argento, Martino and company, though it also bears some stylistic similarities to the more obscure late '80s gialli like Obsession: A Taste for Fear and Too Beautiful to Die, either of which would play well with this one. Unfortunately this came out just as the theatrical market for this kind of fare was evaporating completely, leaving it to play for a token week in a couple of small metropolitan theaters before heading to VHS and laserdisc from RCA/Columbia with one of the darkest, muddiest transfers known to mankind. That presentation definitely did no favors to the work of cinematographer Janusz Kaminski, who would go on to become Steven Spielberg's regular director of photography and rack up Oscars for Schindler's List and Saving Private Ryan. Fortunately this is before he developed a fetish for blown-out white highlights all over the screen; instead he delivered a beautifully shot film that's finally actually enjoyable when you see it with a solid transfer.

Actors Ray Sharkey (who would be dead three years later) and Michael Chiklis team up again one year later after the notorious John Belushi biopic Wired as two cops, Capra and Reese, in the midst of a spree by a raincoat-clad maniac who's knifing rich women to death every time it rains. (Weirdly, Argento would use the same basic 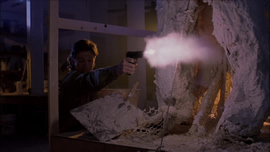 device soon after in Trauma.) Capra's assigned to the case but soon has to deal with a FBI agent, Dalton (Beecroft), who's brought in to work with him; complicating things further is the fact that Dalton's wife, Adele (Coleridge), is part of the same social circle being targeted by the killer. She and Capra soon hit it off a little too close for comfort, while the nocturnal predator with a rain fixation keeps leaving puzzling clues in his wake and a growing 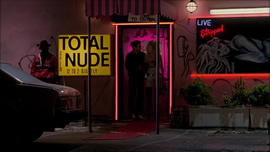 Few viewers will award this one major points in the story department since the killer's identity doesn't come as much of a shock, but it's fun to see Sharkey strut his stuff in a neo-noir giallo riff with lots of stylish murder scenes and surprisingly intense sex scenes, with frequent Corman skin provider Maria Ford doing much of the skin honors here. Chiklis doesn't get much to do besides run his mouth while wearing a Celtics cap, but it's fun to speculate how this might have paved to way to his much more rewarding roles on TV in The Shield, The Commish, and Gotham. The serviceable, synthy music score comes courtesy of Terry Plumeri, who's probably best known for doing Scarecrows just before this.

As mentioned above, this film fared particularly poorly in the '90s on home video with its vivid, primary colors and shadowy aesthetic turning into mush. Thankfully that was finally corrected in 2015 with a DVD release from Scorpion Releasing and a limited Blu-ray available exclusively through Screen Archives. The DVD would definitely be a big step up over what we've had before, but if you're so inclined the Blu-ray is the best way to go since it can handle the heavy saturated hues better than NTSC could possibly manage. It still looks like a '90s film so there isn't the pristine crispness you'd see in features now, but it's a nice, highly effective presentation throughout that pushes the entertainment value up several notches. The DTS-HD MA stereo audio sounds fine for the undemanding nature of the sound mix, and extras include the original trailer and optional wraparound segments as part of "Roger Corman's Nightmare Theater" with regular hostess Katarina Leigh Waters camping it up with an umbrella in a bloody rainstorm and offering some trivia about many of the folks in front of and behind the camera.