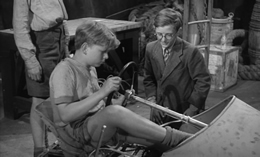 Following the model set by their first triple feature of Children's Film Foundation features made between the '50s to the late '70s, the alternately won 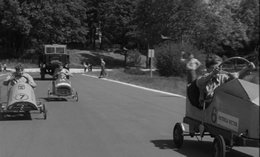 derfully and daffy London Tales, the BFI returns to the innocent days of youthful hijinks across England with another common theme this time: racing. That concept is actually a bit stranger and more whimsical than you might imagine at first, with kids not only racing each other in homemade soapbox cars but flying in the air and getting into other semi-dangerous shenanigans involving a supernatural t-shirt, all with a more or less happy ending for everyone involved.

First up is the earliest of the trio, 1957's "Soapbox Derby," the most realistic of the bunch as well and similar in tone to "The Salvage Gang" from the previous BFI set. Here we have a group of kids, the Battersea Bats, planning to compete in a homemade derby race against their rivals, the Victoria Victors, who don't tend to play fair. The leader of the Bats, Peter (a disorientingly young Michael Crawford, many years before he became Andrew Lloyd Webber's Phantom of the Opera), helps them maneuver their way to the final race by darting in and out across the neighborhood, ranging from new apartment complexes to scrap yards along the way. As squeaky clean as you can get, it's a nice little appetizer most fascinating for seeing a future musical theater legend in one of his earliest roles. 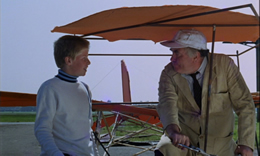 From here we jump to bright, vivid color with 1967's "The Sky-Bike," which starts on a hallucinatory note with young Tom (future Benny Hill player Shires) dreaming of flying through the blue-tinted air. His day-to-day life is much more mundane, but things change when he learns that local Mr. Lovejoy (Redmond, a familiar face from Curse of the Demon and 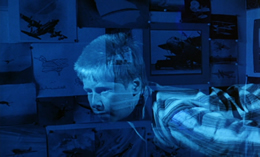 The Ghost and Mr. Chicken) has been working on a foot-pedaled aircraft. Tom becomes convinced he's destined to help bring the sky bike to the air, but his efforts are complicated by baddies with plans of their own.

Buoyed by a sprightly score from composer Harry Robertson (more famous for his later work on all three of Hammer's Karnstein vampire films and Hawk the Slayer), this isn't exactly a special effects extravaganza (you won't have much trouble figuring out how the flying scenes were accomplished), but the barrage of eye-popping colors and the vivid snapshot of late '60s England captured through the eyes of a child makes it a fun piece of nostalgia while capturing a rare non-"swinging London" artifact from the period.

Finally comes the absolute highlight of the set, "Sammy Super T-Shirt," one of the most beloved of the CFF titles and a complete blast for anyone with a fondness for all that bionic-themed TV madness in

the late '70s. Little Sammy (Winch) wants to be a champion track runner in the upcoming Junior Superstar Challenge race, a hope he shares with his best friend, Marvin ('70s TV actor Mark, sporting a fantastic afro). Fortunately Sammy has an ace up his sleeve: a t-shirt jolted with so much electricity it gives Sammy superhuman powers including, of course, accelerated speed. Of course, his special shirt catches the attention of people with no qualms about stealing it for their own selfish ends, and Sammy has to face a few other unexpected twists that might teach him a big lif

Composer Robertson not only returned for this one but also wrote the story, while director Jeremy Summers (who had previously helmed such films as The Vengeance of Fu Manchu, Dateline Diamonds, and House of 1,000 Dolls) keeps things fast, funny, and entertaining. A lot of kids fell in love with this story at the time and during constant circulation throughout the '80s, and it's not hard to see why. The story itself is an ideal kid's adventure with lots of "advanced" technology, bumbling scientists, and a host of great character actors including Michael Ripper (another Hammer vet from films like Dracula Has Risen from the Grave), Julian Holloway (Scream and Scream Again), and Patsy Rowlands (Tess).

Unlike the previous CFF release from the BFI, all three of these features (each running just around an hour) were shot widescreen in varying aspect ratios, presented here anamorphically enhanced. The first two are 1.66:1, while Sammy is 1.85:1, which will probably be a big surprise for those who first encountered it courtesy of TV airings. All three look excellent with very little damage or debris, and the colors on the second and third features make them instant pop culture time capsules in addition to fun family-friendly diversions. As usual there's a handy liner notes booklet containing a general essay about the films by Andrew Roberts, a Vic Pratt history of the CFF, a brief written remembrance by Michael Crawford, and more specific notes on the three films by Roberts and Sonia Genaitay. Great fun all around.