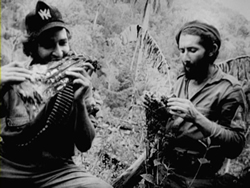 Though he’s best known for a string of left-leaning feature films ranging from Teorema to Salo, director Pier Paolo Pasolini also showed a strong affinity for short-form narratives. Whether contributing to anthologies like RoGoPaG and The Witches or building multi-storied anthology films out of literary classics, he showed no hesitation to working in formats other than the normal three-act film structure. 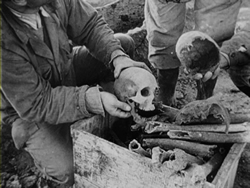 One of the strangest and rarest variations of his experimental tendencies can be found in the film La Rabbia (“The Anger”), a sort of free-form look at the conflict between left and right-wing politics after World War II. Italy seems like an obvious ground zero for a project like this given the fact that it was still recovering from the disastrous leadership of Mussolini, and much of Europe was still wary of the exact direction in which the winds of change might be blowing. Slicing together a slew of newsreels and other archival footage, Pasolini created sort of a cinematic collage about the state of the world including the liberation of third-world countries, the consequences of pop culture, the Cold War, and the decline of the monarchy, among other subjects. It’s all a bit scattershot and feels like a student film at times, but moments of transcendence still poke through thanks to his poetic voiceover which tries to put everything in context as a sort of Marxist-themed state of the world essay.

However, Pasolini was unaware that the distributors would come up with a strange plan to make this film more palatable to the forces that be. Right-wing Giovanni Guareschi, author of the “funny priest” Don Camillo novels, was recruited to create a reactionary counterpart to Pasolini. Using similar footage at times and covering much of the same territory, he reveals very clearly why he 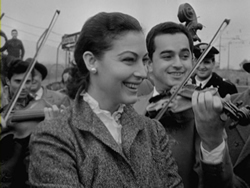 should’ve stuck to writing instead of this one-shot attempt at directing. The unifying thought here is to provide two opposing viewpoints addressing the question of why mankind continues to subject himself to war and suffering, but Guareschi’s thoughts are so unpalatable and xenophobic (not to mention homophobic, sexist, and anti-American) that it’s no wonder the film was essentially buried upon its original release. Weirdly, neither of the men makes any use of his trademarked sense of humor, which would have really helped the film become more universal and appealing for audiences instead of the political diatribes that can wear one down even halfway into the 104-minute running time.

As bizarre, difficult, and sometimes dispiriting as the main feature can be, its history is fascinating enough to easily justify Raro’s DVD release. Pasolini fans alone will have a field day strolling through the film itself and the accompanying 61-minute documentary, “La Rabbia 1, La Rabbia 2, La Rabbia 3… Arabia,” which chronicles the difficult path to the film’s release (which found Pasolini’s original 100-minute version hacked into oblivion and the final cut lost for years due to a peculiar labeling mishap). The transfer itself is taken from the 2007 restoration, which reinstates color footage of paintings by Renato Guttuso (also one of the narrators in Pasolini’s segment) and looks about as good as you could expect for a film pieced together from preexisting footage. Also included are five very different trailers trying to pitch this film to the public (including ones tailored to each of the directors setting up their "duel"), as well as a 17-minute Pasolini short, “La Mura di Sana'a” (a vibrant look at the impact of global progress on Yemen) and a liner notes booklet including essays by the Pasolini Archive's Roberto Chiesi, Giovanni Guareschi, and vintage comments by Italian writers including Andrea Barbato and Alberto Moravia.