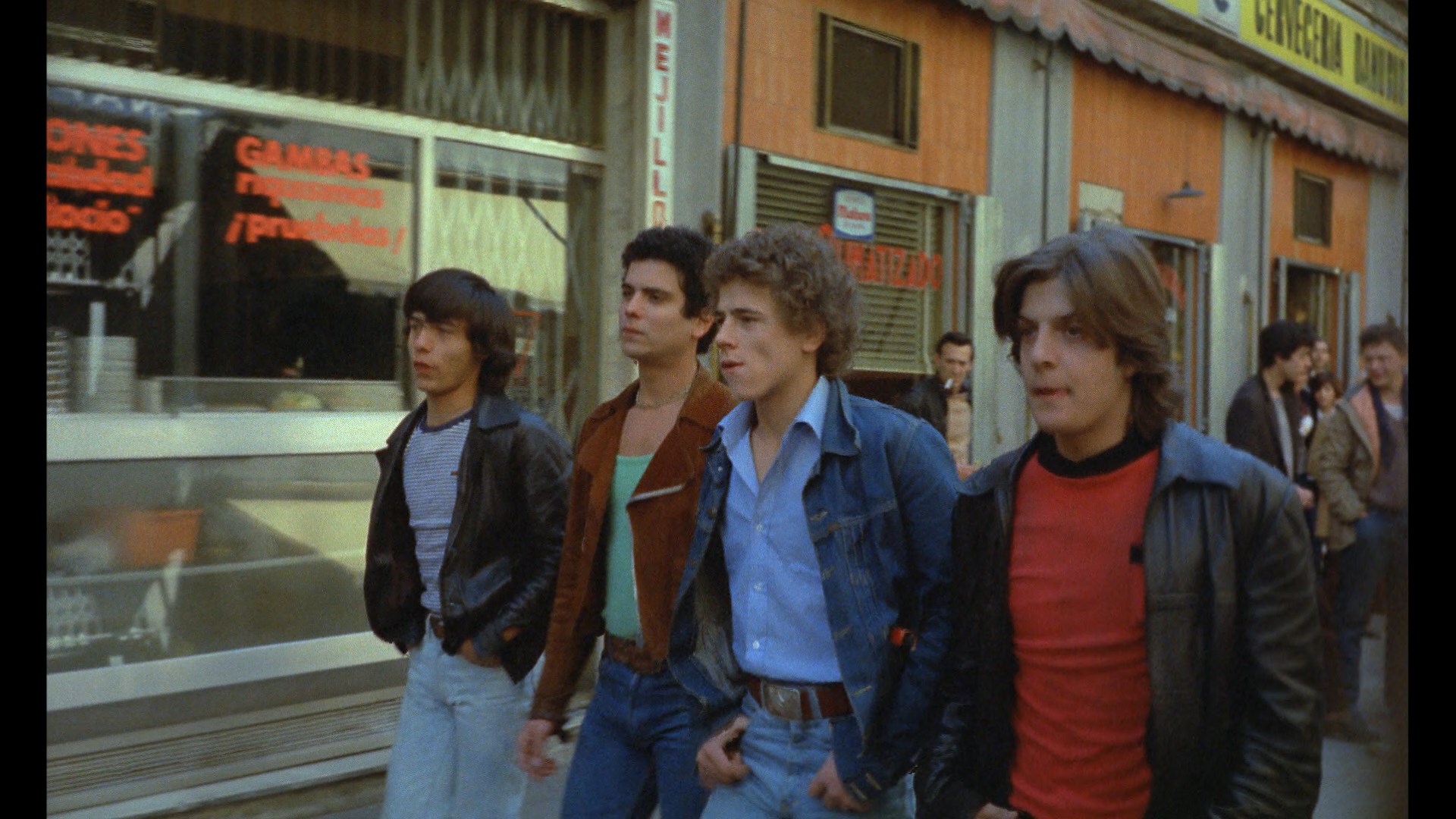 of unavailability outside of Spain, North America 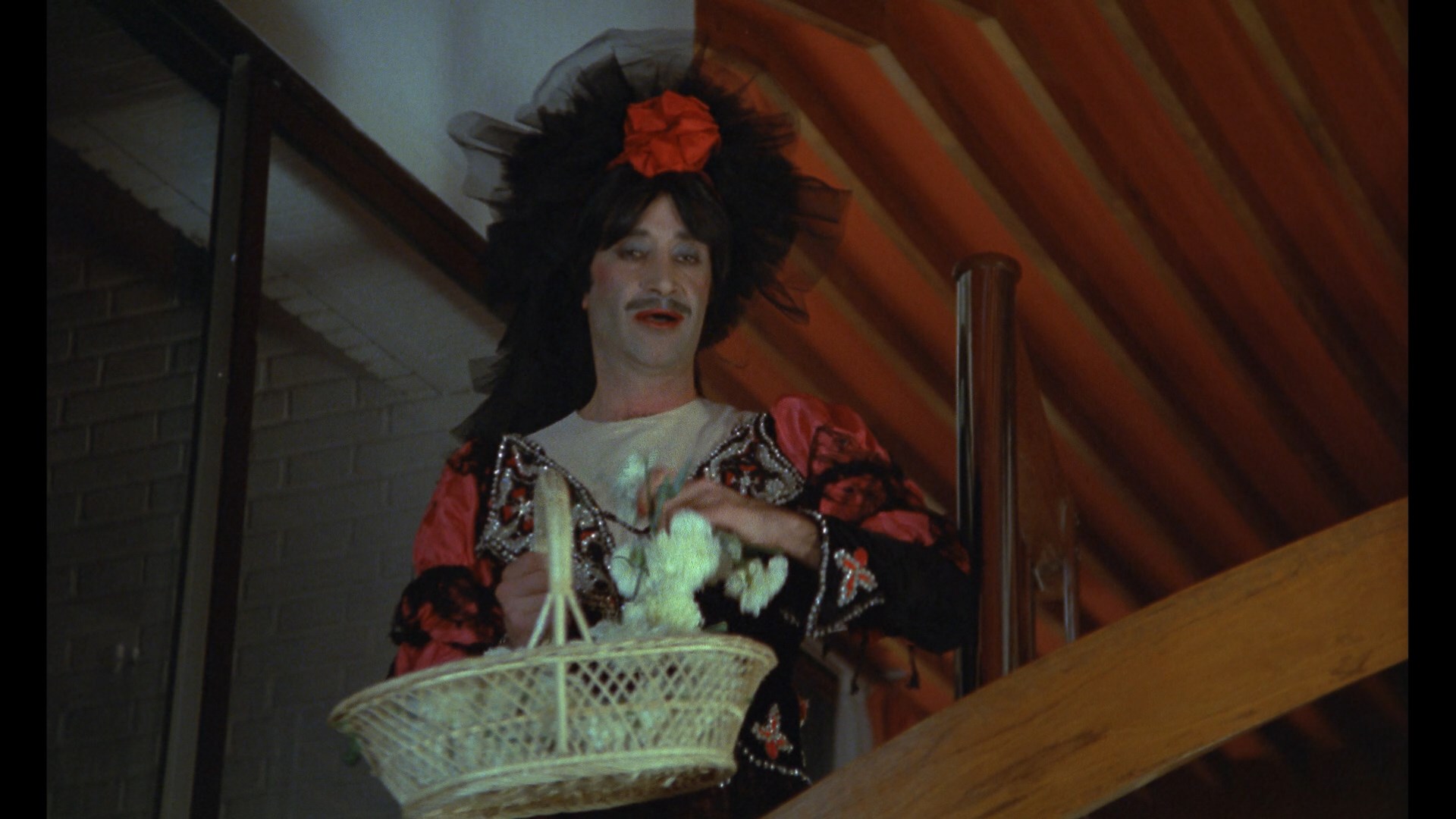 is finally catching up with the "quinqui" wave that hit Spanish theaters for about a decade during the post-fascist period in the wake of the death of General Franco. The considerable loosening of censorship standards on screen went hand in hand with several years of economic strife, with an entire generation of adolescents facing a very shaky future that led to an outbreak of crime and drug use. That was reflected in these modern juvenile delinquent films, many of which were significant hits even if the grubby subject matter and even less attractive visual veneer didn't win over a lot of critics at the time. The leading director of this movement was Eloy de la Iglesia, who had made his name with offbeat thrillers like The Cannibal Man, The Glass Ceiling, and Murder in a Blue World before taking advantage of the new cinematic freedom in the late '70s with an excellent trilogy of films analyzing the intersection of homosexuality, politics, and religion (Los placeres ocultos, El diputado, and El sacerdote, all of which got modest U.S. art house play). In 1981, he found his most famous cinematic calling with the quinqui trend and particularly his most memorable lead, José Luis Manzano, a non-actor he discovered in 1978 along with another signature on-and-off player, José Luís "El Pirri" Fernández. Essentially the 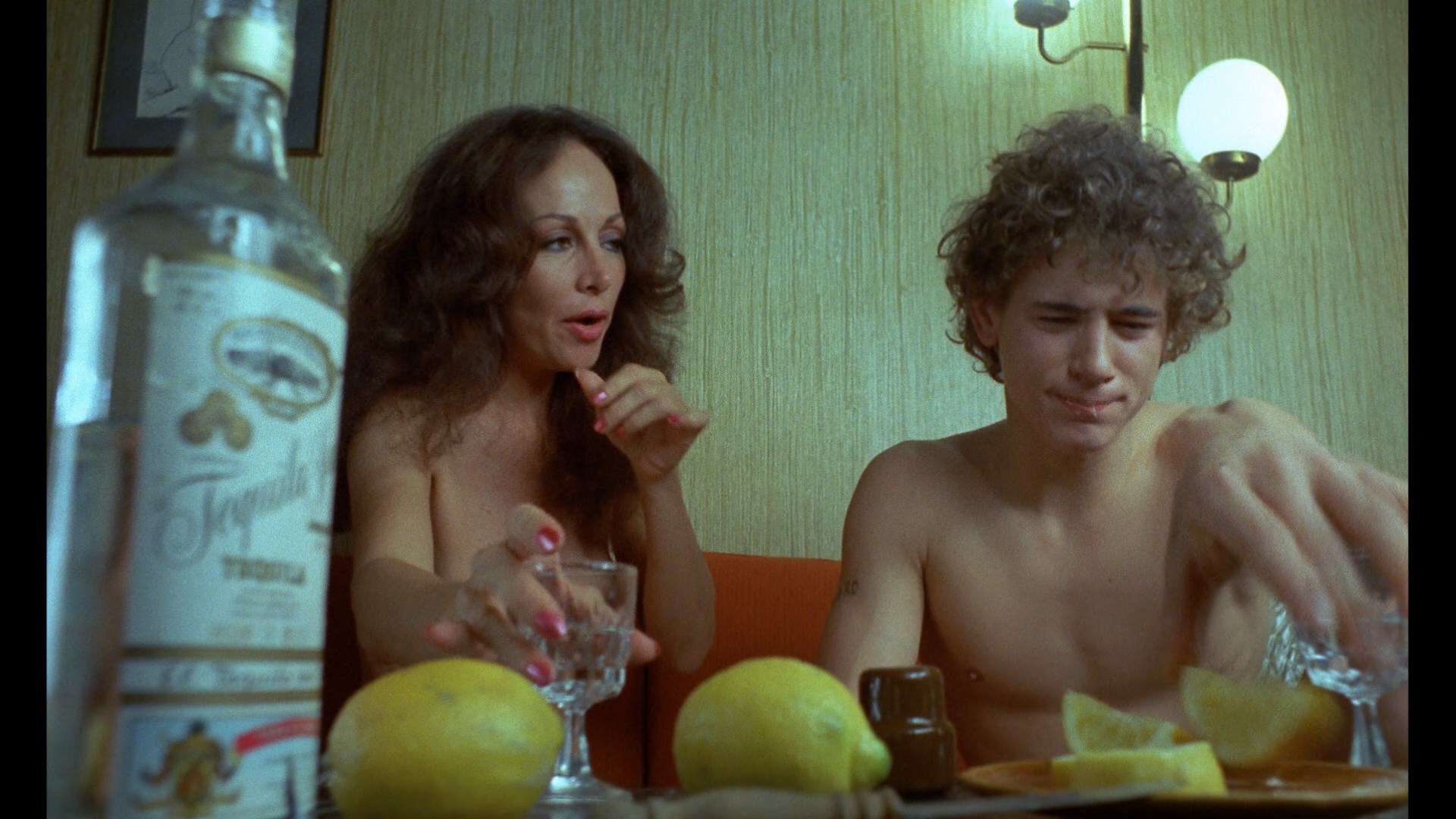 equivalent to the symbiotic relationships between other gay filmmakers and their male muses like Pier Paolo Pasolini/Ninetto Davoli, Paul Morrissey/Joe Dallesandro, and Luchino Visconti/Helmut Berger, Manzano would star in five films for the director, three of which have been compiled in 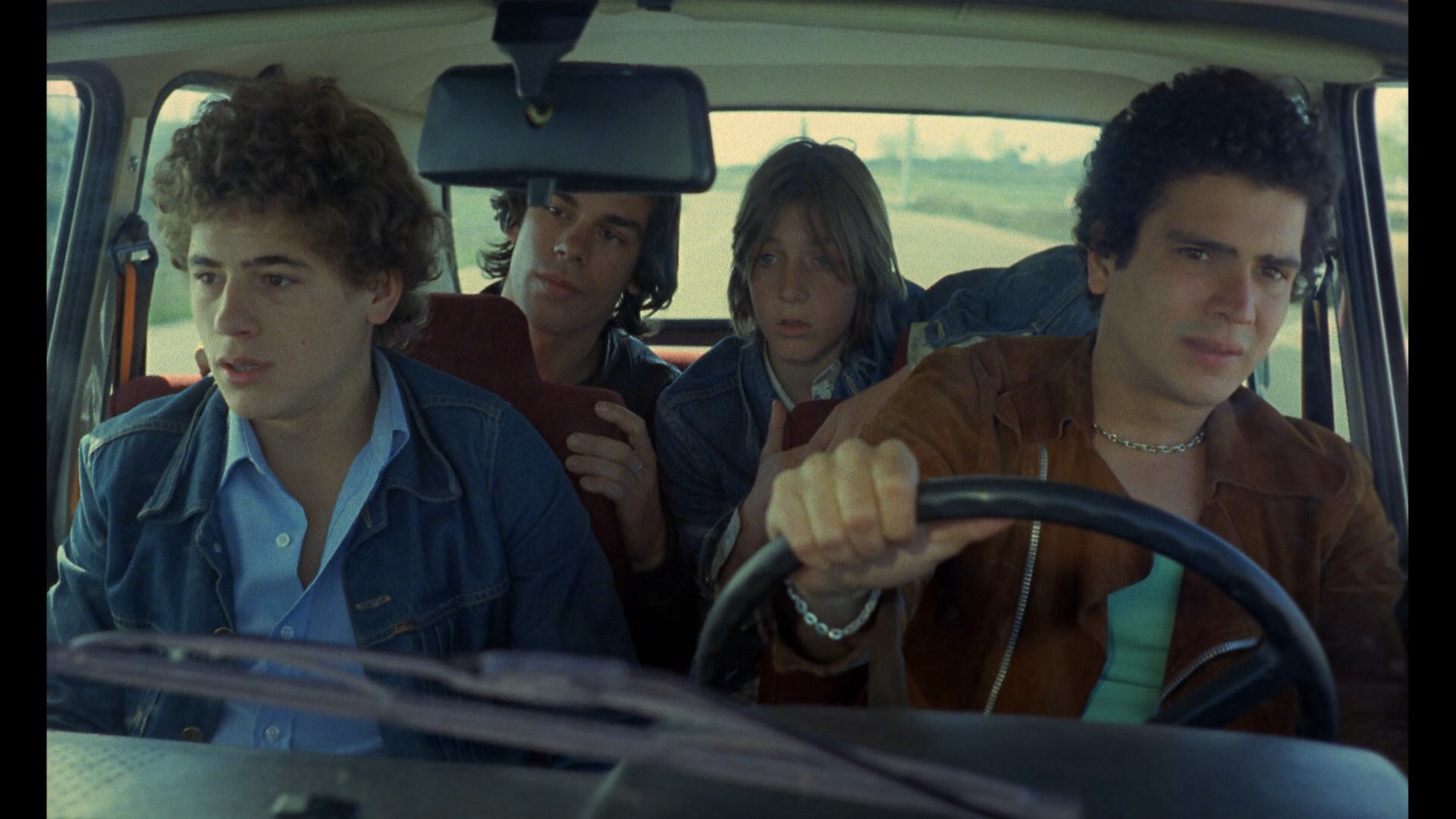 Severin Films' Blu-ray double-disc set, Eloy de la Iglesia’s Quinqui Collection, offering a trio of key entries for the first time with legit English subtitles. In a sad reflection of the films themselves, several of the actors died very young including Manzano, an on-and-off drug addict who passed away in 1992 under tragic circumstances.

First up is Navajeros, a 1981 crime drama inspired by a real-life delinquent, El Jaro (Manzano), who's already a seasoned criminal with several stints in and out of the reformatory and an older brother already doing years of hard time. Finding shelter with an older prostitute named Mercedes, he's formed a petty crime gang with three of his friends and is constantly dodging the police, sometimes by milliseconds. His life takes a dramatic turn when he meets and falls hard for Toñi (Castro), a young heroin addict who goads the gang into higher stakes jobs that pit them against a vicious dealer, El Marqués (San Francisco), with extremely harrowing results.

A powerful updating of the juvenile delinquent formula for modern Spanish audiences, Navajeros proved popular for its mixture of realistic drug use and depictions of the narcotics trade, casual nudity, and brutal violence, including a then-shocking twist on the cinematic rape-revenge formula. Both Manzano and Fernández returned for the following year's Colegas, a story of three friends involved in hustling, drug smuggling, and teen pregnancy; this would be the only film of the cycle to get a North American theatrical and home video release later on in the '90s during the first wave of Pedro Almodóvar mania. As of this 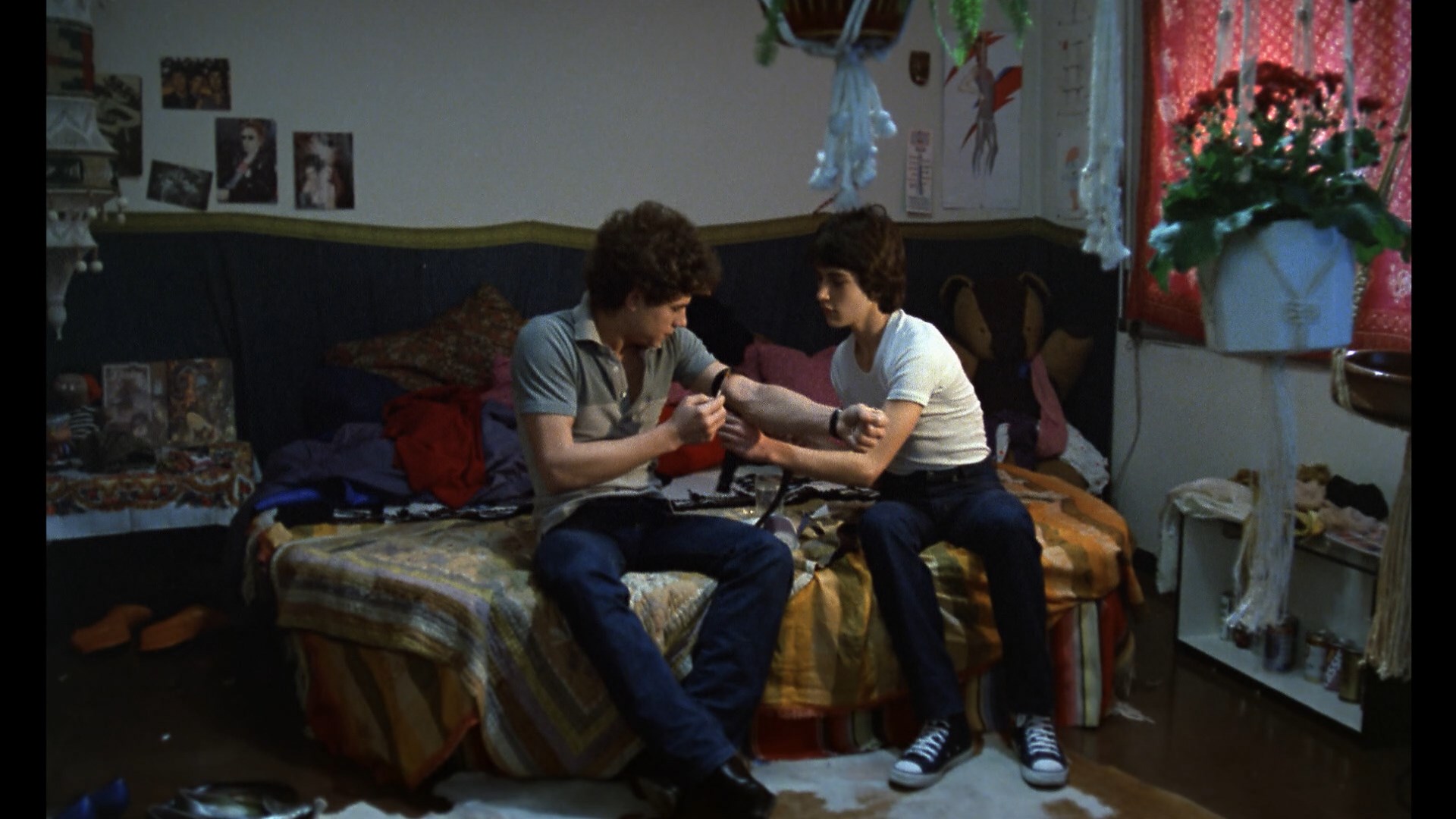 writing, it's currently only available on Spanish Blu-ray without 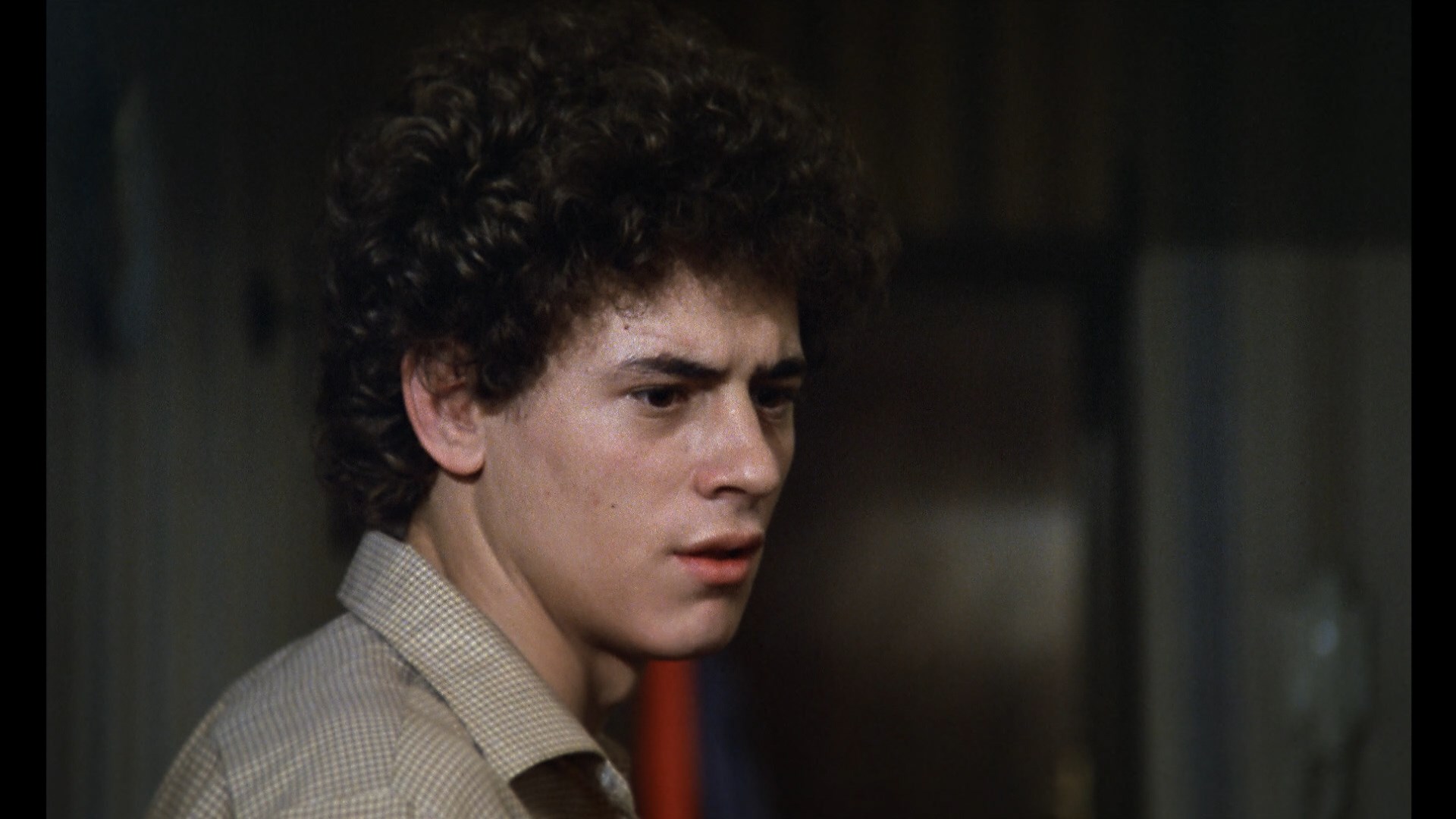 subs (along with the more genteel fifth and final film in the Iglesia quinqui cycle, La estanquera de Vallecas), but is well worth checking out if you can find it. That brings us to the second film in the Severin set and the biggest hit of them all by far, El Pico, which made a big splash in 1983 in Spain (and nowhere else, unfortunately). Paco (Manzano), who lives with his family including an extremely conservative father, Evaristo (Cervino), has fallen into drug addiction with his best friend, Urko (Garcia), who comes from a broken home and a leftist politician dad. Rather than preparing to go to military school, Paco spends his time with Urko as they have sex with Betty (Espinet), who points them into becoming drug dealers. Paco also frequently hangs out with a gay artist, Mikel (San Francisco), who urges him to stay clean -- something that the young man finds increasingly difficult when tensions at home involving his terminally ill mother explode and his father has to take dramatic steps for an intervention.

With its sympathetic portrayal of youths trying to find direction and lured by the temptations of easy, temporary relief from the world around them, 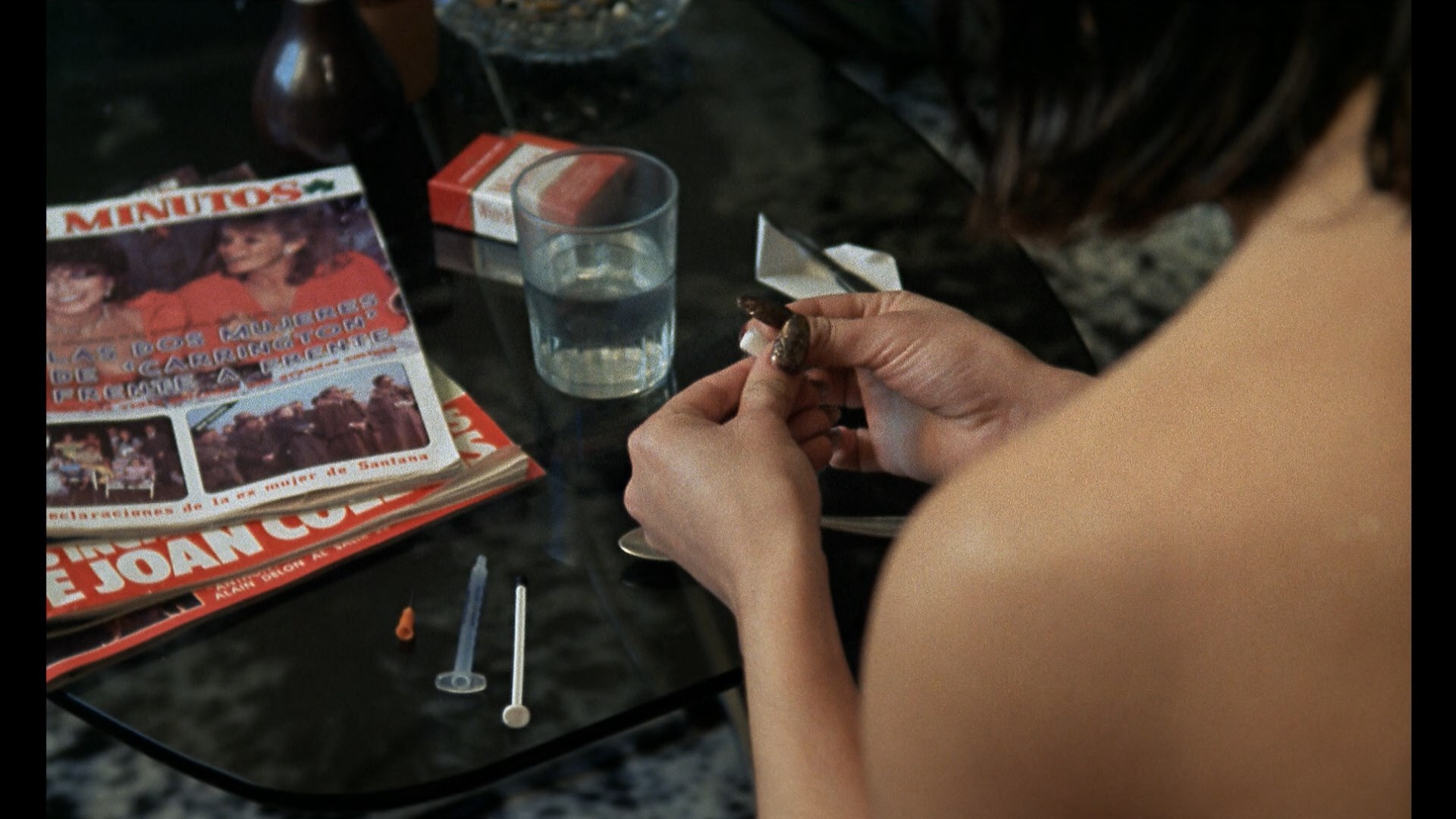 El Pico struck a cord with teen viewers and made Manzano into the indisputable actor figurehead of the teens in trouble trend. However, apart from one film he stuck exclusively with the director who discovered him, something that ultimately proved to be a major obstacle down the road. 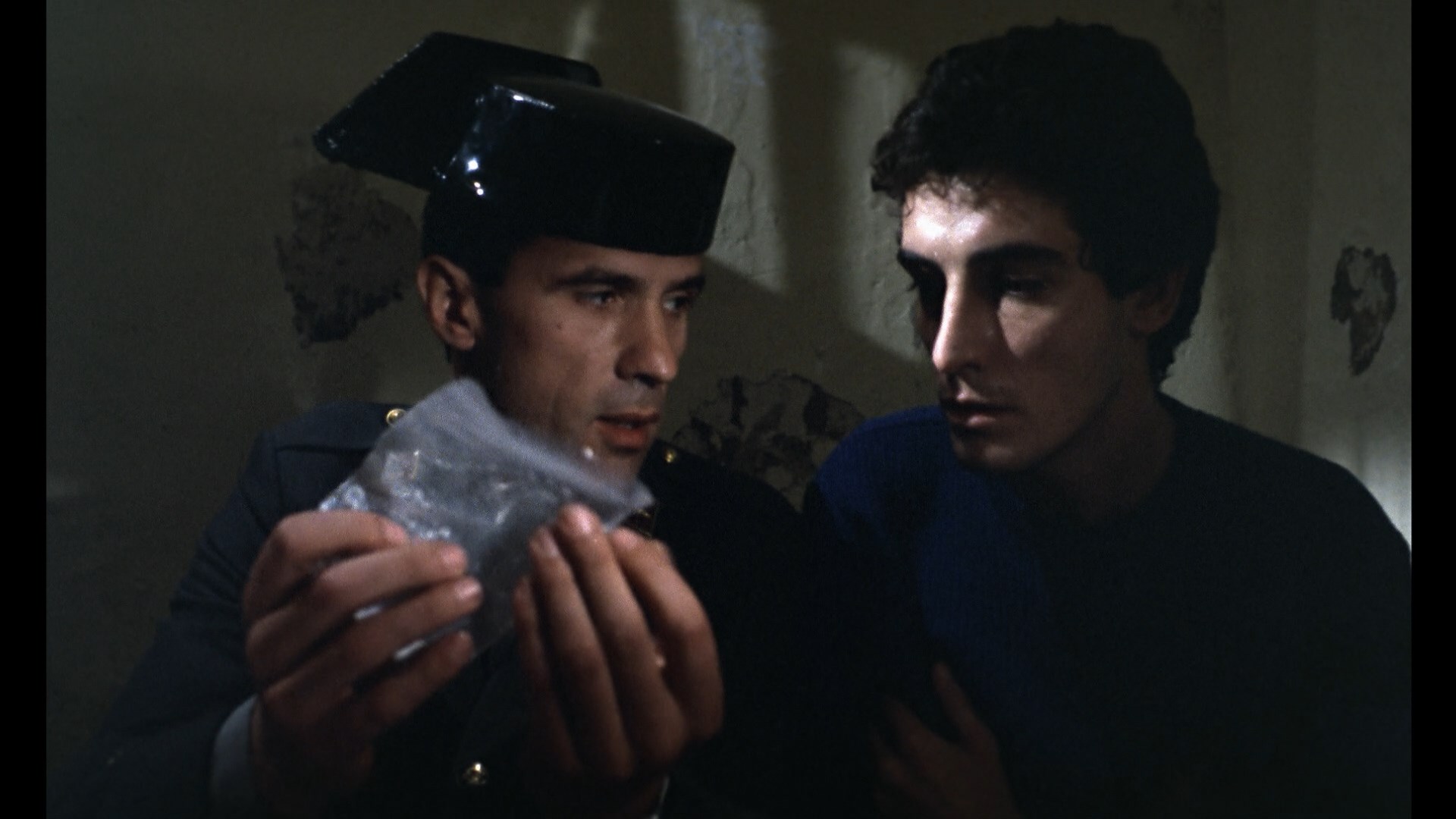 Of course, it was a no brainer that they would team up again for a sequel the following year, El Pico 2, which bares its classic J.D. roots by spending a great deal of time behind bars (likely the reason for its lower box office receipts). Here Paco and his father are picking up the pieces from the multiple tragedies at the end of the prior film and have moved to be with his grandmother, but things take a downturn when the boy, still grappling with the pains of withdrawal, is convicted for one of his previous crimes and sent to jail. There he becomes entangled with several cell mates including powerful gang member El Lehendakari (Valls) and the friendlier El Pirri (Fernández of course), which leads to a gruesome escape plan, a drug-fueled relapse, a reconnection with Betty, and a bullet-laden showdown that will leave multiple deaths in its wake.

What's fascinating about watching these films over the years is how little they remain locked into the era in which they were made, with minimal pop culture trappings apart from a few pop songs and some background posters. The current fascination with them in 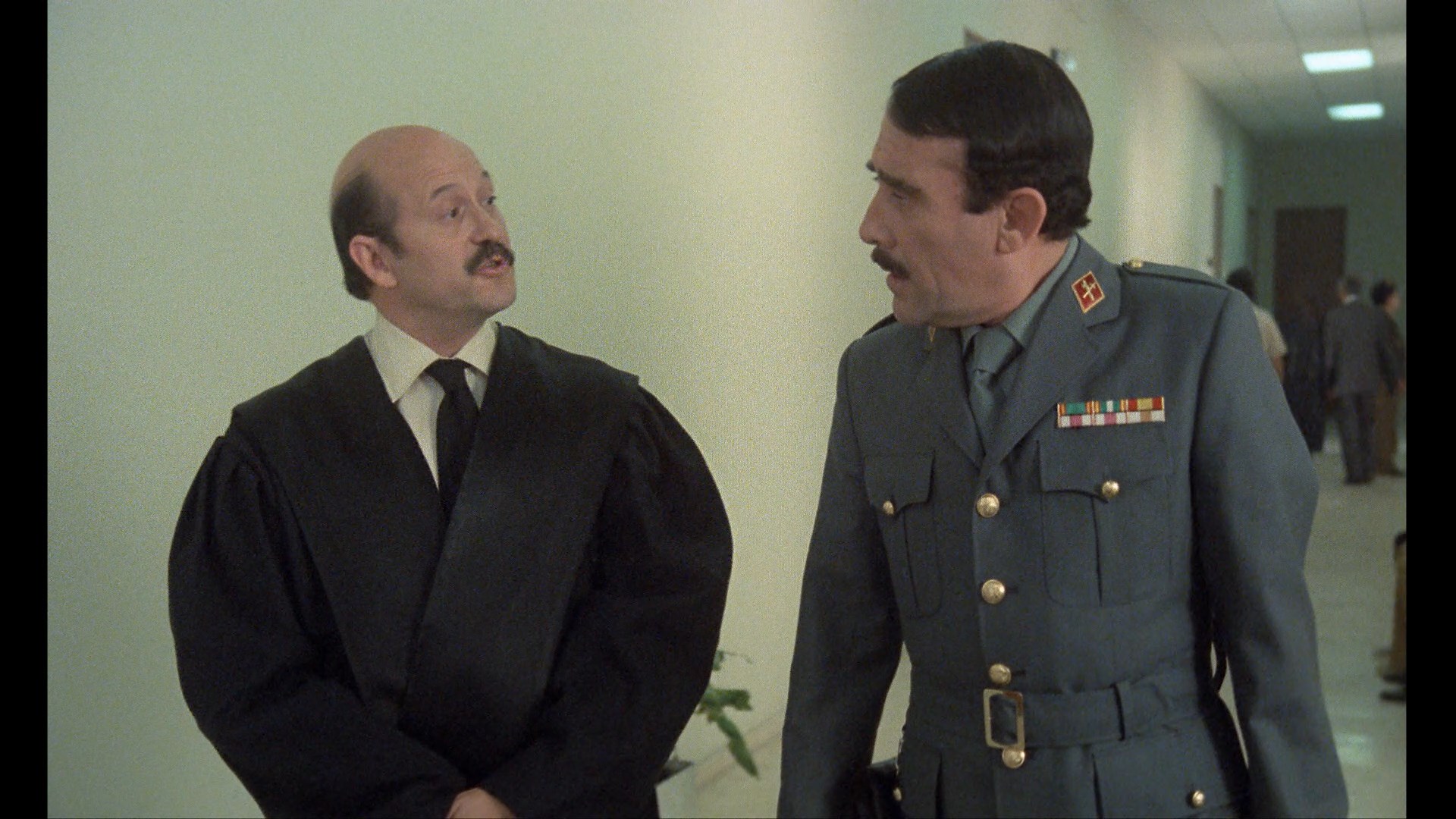 Spain makes perfect sense given how the recurring themes of class oppression, political discord, addiction, and exploitation still resonate today, while the use of mostly non-actors in primary roles gives 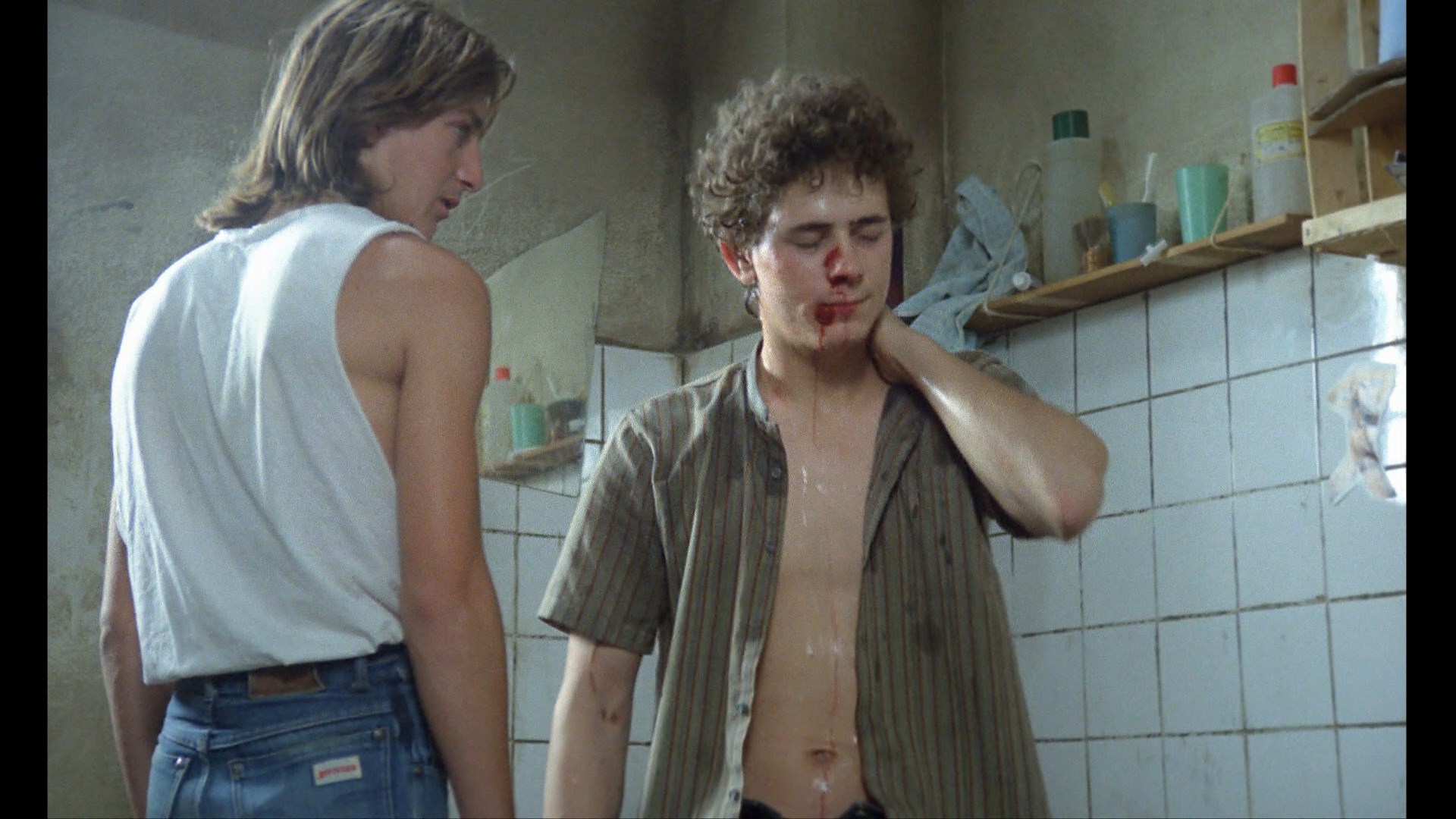 them an authentic feeling similar to what Pasolini was going for in the '60s. It's a miracle to see Severin taking a shot on something as unknown as this with U.S. audiences, who should absolutely check this out for a unique blend of art and sleaze that's still like nothing else out there. All three films are presented in beautiful restored scans from the camera negatives initially prepared for the Video Mercury Blu-ray releases in Spain in 2015, and this marks their worldwide English-friendly home video options in any legitimate format. (Custom subtitles for El Pico have been floating around since the DVD a long time ago, but they were really atrocious.) The DTS-HD MA Spanish 2.0 mono tracks are all in fine shape, with optional yellow English subtitles. Both El Pico films are presented on the same disc with their respective subtitled Spanish trailers as extras, while the more substantial bonus material can be found on Navajeros starting with a video interview with actor José Sacristán (8m39s), who got to observe the director's transition to quinqui films firsthand 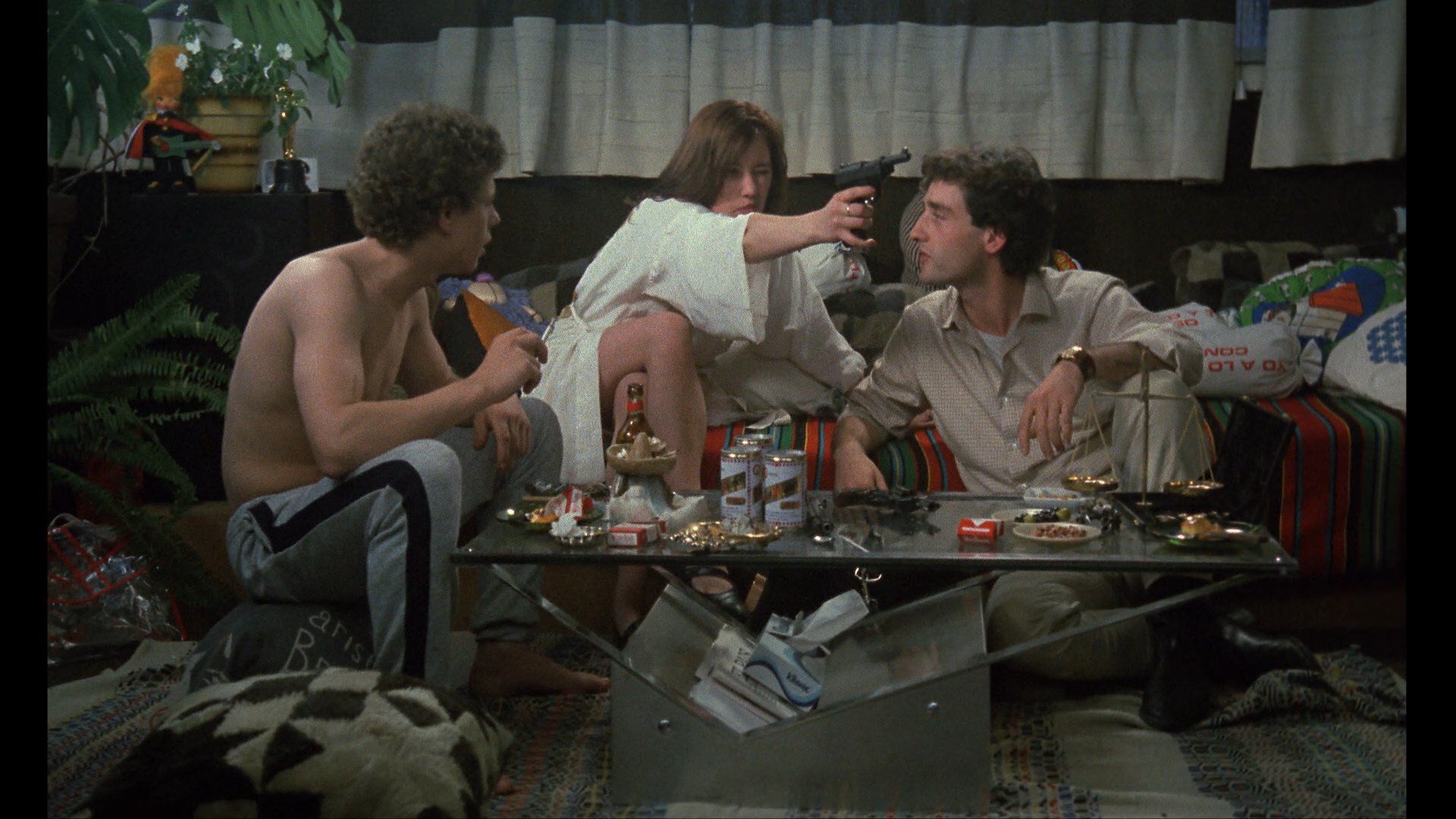 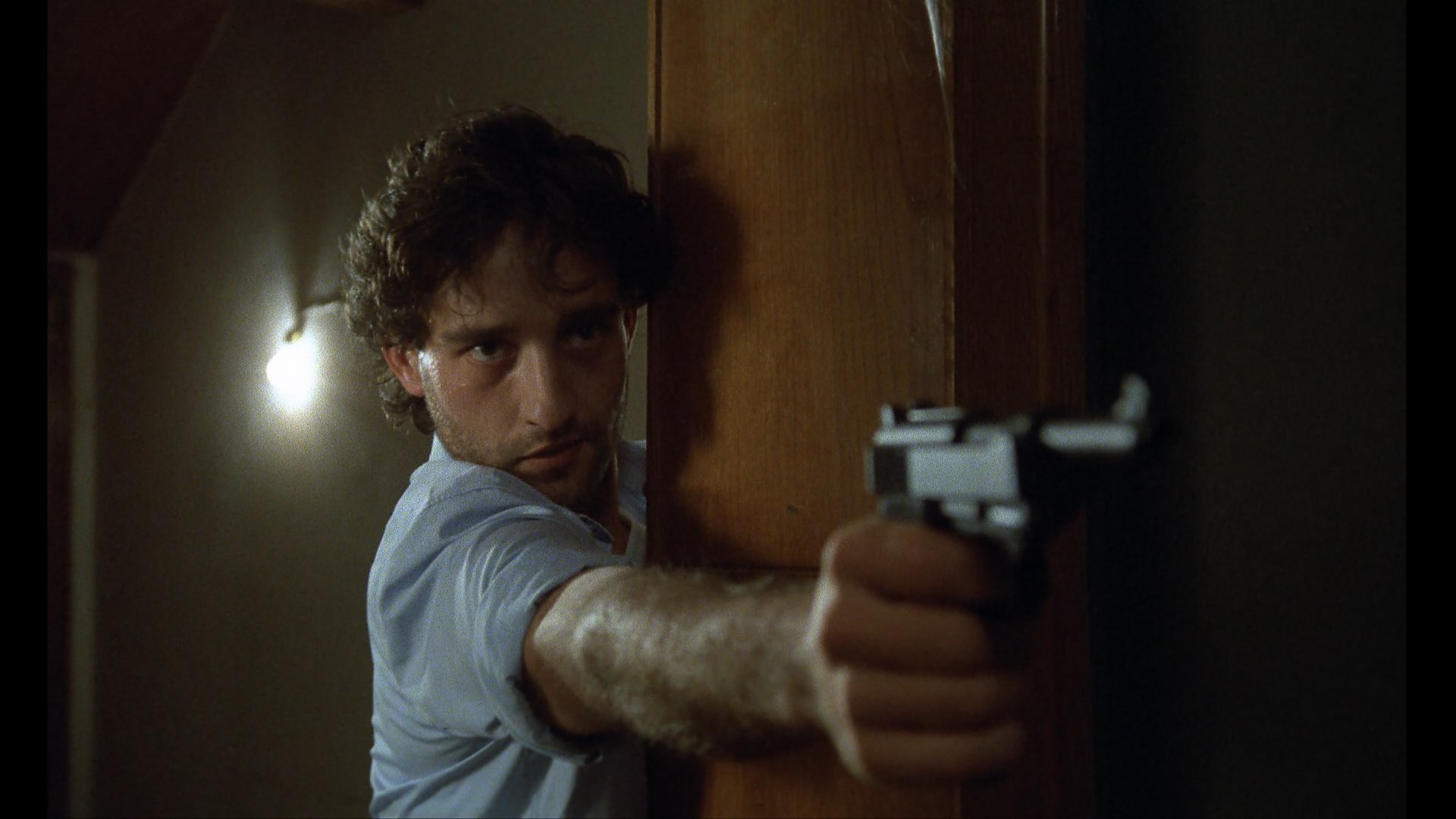 noche. His firsthand stories are all very interesting, and it could've easily gone twice the length without losing steam. If you're new to this strain of film, the best place to start might be the second video extra, "Blood In The Streets: The Quinqui Film Phenomenon" (44m45s), which features interviews with Mery Cuesta and Tom Whittaker (both historians on the subject and authors) who clearly lay out the real-life groundwork for the films, the real-life inspirations, the grim fates of many familiar faces, and a number of wild side stories along the way, all while covering the major titles involved. For the real die-hards, brace yourselves for "Queerness, Crime, And The Basque Conflict In The Quinqui Films Of Eloy de la Iglesia" (67m42s), a lengthy and in-depth Zoom panel with Alejandro Melero and Paul Julian Smith, moderated by Evan Purchell, covering the themes of sexual orientation and identity running through these films (and other key works by the director) as well as the ways the characters' regional backgrounds and political outlooks are intertwined for a portrait of a society in upheaval.