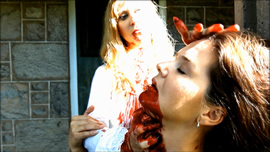 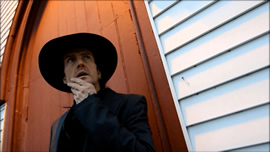 Bearing no connection to the '60s Curtis Harrington sci-fi/horror hybrid of the same title, this bloody, dialogue-devoid art film is the second feature for Chris Alexander, the former Fangoria editor in chief, who designed this as a sort of sequel in spirit to his 2012 vampire film, Blood for Irina. Though it's only noted in a tiny box on the back of the packaging, the Intervision release of this film on Blu-ray (with a separate DVD edition as well) actually contains both titles, making this an unofficial double feature most viewers will probably watch in reverse order.

First seen crawling out of a lake in a soggy white dress stained with blood, the wordless Irina (Henry) spends her opening minutes of Queen of Blood skulking around the pastoral outskirts of a town and laying waste to anyone who crosses her path. If she looks more than a bit like the title character from Jean Rollin's The Living Dead Girl, that's hardly accidental since she even recreates her predecessor's murderous method of plunging her sharp fingers into her victims' flesh to draw out their blood. Title cards split the action into "Birth," "Death," and "Rebirth" as she tangles with locals including a not-terribly-stable preacher (Skinny Puppy's Ogre) and a pregnant widow (Gemmell) whose impending delivery figures in the film's Inside-inspired climax. 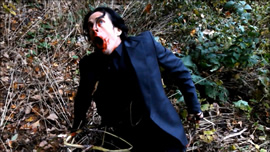 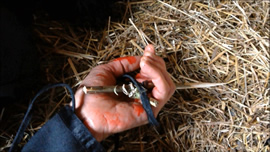 The heavy Rollin influence tones down slightly in the earlier Blood for Irina, whose title tips it off immediately as an homage to Jess Franco's Female Vampire. Here our different incarnation of Irina is a more vulnerable bloodsucker whose body functions are falling apart, causing her to expel the blood she consumes to survive. Her human handler (producer Goodfellow, who also appears in a smaller role in the second film) runs the seaside motel she's turned into her lair, and in a desolate haze, she wanders the neighborhood contemplating her impending oblivion. Into her world steps Pink (Gemmell), a young prostitute who will play a pivotal role in Irina's fate.

That's about it for the plot, and since both films play out virtually silent apart from sound effects and effective, wall-to-wall scores composed by Alexander himself, casual horror fans will probably be left scratching their heads a few minutes into either of them. Both films are basically showcases for Henry, who makes for a solid nonverbal presence whether playing a decaying wreck or a savage predator, and there's no question that Alexander put all of himself into this films with additional duties including shooting and editing. The Rollin/Franco nods 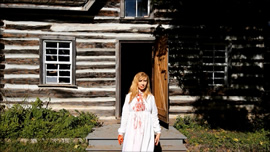 are plentiful and sometimes fun to spot, though oddly enough, the eroticism that fuels both of their films is entirely absent; this is all Thanatos, zero Eros. The slow, dreamy pace is offset by some nice use of color and texture at times, though it's undercut by the decision to shoot both 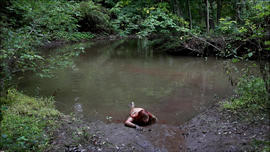 with what looks like differently calibrated consumer grade HD cameras. What comes off as poetic and dreamlike on 35mm film has a habit of turning clunky with 30fps video, and you'll have to fight the urge to mail everyone a light meter when some scenes looking imbalanced and overly harsh. That said, if you can get past the technical limitations there's some pleasure to be found here if you look at these as love letters to a type of cinema that's almost entirely extinct on mainstream movie screens.

The limitations of the productions (which were presumably shot for pocket change) mean the Blu-ray presentation ranges from crisp and impressive to chunky and pixellated depending on the scene, with Blood for Irina looking weaker due to some odd lighting conditions in a handful of night scenes. Both titles feature LPCM audio tracks that do a fine job of supporting Alexander's score, and since there's barely any dialogue (just some voice over in Blood), there's no real need for subtitles or other audio options. Aside from the two films, extras include three minutes of juicy "Gore Gaffes," five minutes of behind-the-scenes footage with "Directing Ogre" (including some unexpected twerking comedy), a 36-second Ogre intro (recorded in a very noisy location), two alternate endings (one a slight extension, the other a much more explicit tie-in to Irina), the single-shot trailer, an Alexander commentary, and a 23-minute cast and crew Q&A (Alexander, Henry, and Gemmell) from the Toronto premiere with the Blood in the Snow Canadian Film Festival. The latter two extras overlap a bit as Alexander cites some of his primary influences (including Malick, Herzog, and Lynch) and goes more into detail about how he planned this as a body count western, with several production anecdotes included about the Ontario shoot.