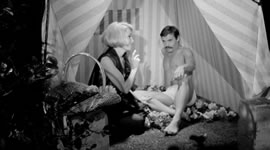 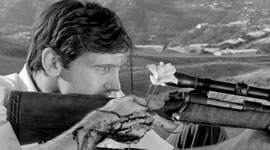 One of the more unorthodox Hollywood figures of the Eisenhower and Kennedy eras, Albert Zugsmith started his career producing tawdry but striking studio films like Touch of Evil and The Tarnished Angels before branching out on his own to deliver pure, unadulterated exploitation for the masses. He's best known for titles like Sex Kittens Go to College, and Vinegar Syndrome even made him the subject of one of their earliest Blu-ray double features, Fanny Hill and The Phantom Gunslinger. Now here's another Zugsmith double header, pairing up a couple of lurid oddities he churned out between 1965 and 1966.

First on the packaging but second on the DVD is one of his more high-profile titles from the era, On Her Bed of Roses, which credits its source material (and alternate title) as Psychopathia Sexualis, the legendary 1886 psychological manual by Dr. Krafft-Ebing that introduced a host of kinks into the public consciousness. What we have here is essentially a modern case study sort of in line with one of the vintage case studies as young Stephen Long (Warren) is first seen getting sweaty and distraught in a rose garden. Afterwards he hops into his car with a guitar case containing a haunting rifle, drives out to the dusty outskirts of town, and starts firing at passing cars in the middle of the 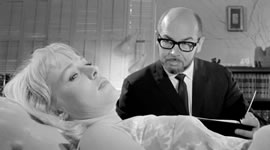 afternoon (with a rose clutched against the trigger). As the cops close in, he turns the gun on himself and leaves a puzzling mystery behind for the authorities and doctors to pick apart. Stephen's girlfriend, Melissa (Lynn), 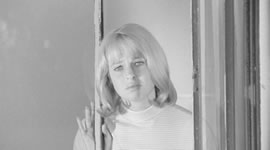 goes into heavy duty therapy with Dr. von Krafft-Ebing (Gladden) and passes out screaming at the sight of a rose, which ultimately inspires her to spill the goods on the "highlights" that led to Stephen's rampage. As it turns out, the murderous youth was deeply affected by a smothering relationship with his promiscuous mother (who seems to harbor some incestuous impulses of her own), a smattering of sexual dysfunction, and the fact that everyone else in the neighborhood besides the defensive, bitchy Melissa seems to have a turbo-fueled libido. Suffering from a massive daddy complex of her own, Melissa likes to throw weird costume parties when her mom's away while her dad offers Coke or 7-Up to her hard-drinking, underage pals, including one-shot scene stealer Lovey Song who runs off with dad to the bedroom before it all erupts into a swimming pool cat fight. Melissa strikes up a friendship with the naive Stephen (who doesn't know what "roll in the hay" means), which leads to a disastrous romantic encounter in his rose garden that holds the key to both of the kids' screwed-up psyches.

Complete with oddball dubbing, overheated therapy sessions, and even a wacko stringer of an ending, this was released in theaters by Famous Players, the distribution arm at the time for Zugsmith's films, and it even scored a surprising vinyl release for its 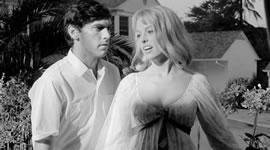 pounding jazz soundtrack by Joe Greene. The acting is wooden in the extreme, which somehow seems appropriate given the nature of the film, and it all has that brightly lit, businesslike veneer found in most of his films at the time. The film became slightly notorious back in the '80s when its VHS release from Something Weird was pulled over legal threats, a fate that also befell Mondo Keyhole, and it's been essentially impossible to see since then until Vinegar Syndrome's officially licensed release. As with Sex Kittens, Zugsmith shot this film in both a "hot" version for international audiences and a cooler, more clothed one for the United States; in this case, the DVD uses the spicier version as the main feature in 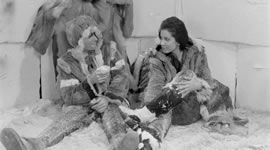 Also on the disc is The Incredible Sex Revolution, which opened a year earlier and also uses the whole therapy gimmick as a narrative device. In fact, Gladden himself is back since this purports to be based on the real-life shrink's book, The Dr. Gladden Study on Changing Sex Mores in our Modern Civilization, so you could argue that this is a prequel of sorts. It also shares a huge chunk 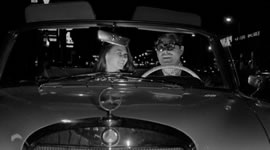 of the other film's cast (including Lovey Song again, who gets way more screen time, much of it with an eye patch), and Gladden stays in character as himself welcoming the viewer to this depiction of (dubbed) depictions of standout cases from his past two decades of psychological sex research. From today's adultery-happy society to the origins of Adam and Eve, we get a look at how humanity has evolved over the centuries (with TV actor and future Blade Runner writer Hampton Fancher turning up as Adam, believe it or not). Polygamy, polyandry, Eskimo "wife lending," a wild west booze and sex game called "post office" (which foreshadows swinging key parties), and so on, before we get to some semblance of a 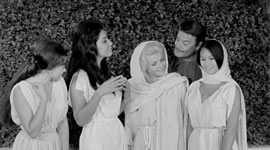 plot with Song visiting Gladden to figure out why she's such a psychosexual mess involving "guilt and something else I find difficult to put into words." Despite the fact that she's married, she keeps falling into sordid situations whether dealing with her philandering nudie painter husband Aaron, filling time after moving to California with a phone sales job, or hanging out at debauched apartment shindigs. Along the way she dips in the pool and romps around with most of her cast mates from the prior film including Warren (billed here as "Christopher" for some reason), plus an appearance by Horrors of Spider Island's Alex d'Arcy for good measure. 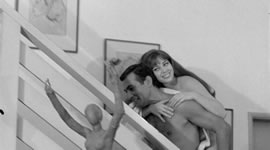 more questions on several occasions), but this is a much lighter, goofier affair with the historical reenactments and outrageous scenarios involving our heroine offering some much-needed contrast to Gladden's yammering behind his desk. It's also loaded to the gills with nudity, finding excuses for a topless woman to bounce across the screen every few minutes to demonstrate exactly how this great sex revolution is going down.

Again this film was shot in both hot and cool versions, with the much more revealing option playing as the feature itself. Three minutes of alternate shots are also included as a separate reel, reflecting the Adam and Eve (which adds hazy optical fog over Eve's breasts for a very long time) and house party sequences. Image quality is again immaculate throughout, and the audio is cleaner than the prior film as well, which is surprising considering this is by far the rarer of the two features. Highly recommended, obviously.