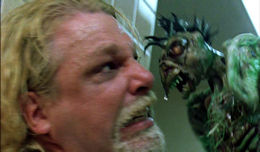 As the low-budget horror landscape has shifted almost entirely to home video, enterprising indie companies have become far more choosy about which projects to give a big theatrical push and market as tentpole releases for a wider audience. Troma, one of the most prolific companies of the entire video age, has become a good case in point, with only a few select titles -- usually helmed by company founder Lloyd Kaufman -- gracing theater screens in the past 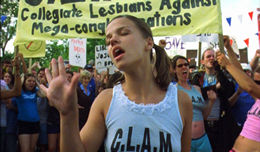 decade, such as Terror Firmer. Easily the most ambitious and aggressively promoted Troma film in years, Poultrygeist: Chicken of the Living Dead had some high expectations to meet among fans, who were promptly greeted with a gore-drenched monster comedy featuring Native American chicken zombies, numerous musical numbers, scheming lesbians, a Ron Jeremy cameo, and a possessed gay fast good sandwich. Needless to say, it's a unique experience that covers so many bases you're bound to raise a chuckle and gag at the same time throughout the entire film.

While making out in a cemetery containing the remains of numerous Native Americans, homebound Arbie (Yachanin) and college-bound Wendy (Graham) are interrupted by an axe-wielding peeping tom who drives them off and gets attacked from behind (literally) by a ticked-off zombie. Soon the cemetery is razed to the ground to make way for the opening of a new fast food restaurant, American Chicken Bunker, whose racist founder, General Lee Roy (Watkins), is about to visit for the grand opening. Unfortunately the celebration is hampered by a horde of protestors including a gang of ticked-off lesbians led by Micki (Sereboff), who has stolen Wendy away from Arbie -- who decides to go work for the chicken chain to get revenge. The franchise owner, Denny (Olatunde), hires him as a counter girl (with a "Daisy" nametag) to work alongside the burqa-wearing fry cook Humus (Ghavami), closeted Jose Paco Bell (Rivera) who enjoys adding his own special sauce to the chicken, and animal-loving idiot Carl Jr. (Emerson). Oh, and they've tossed all the exhumed bodies from the cemetery out back in the dumpster. Soon all the dead chickens and Indians combine to form a supernatural perfect storm in which customers and employees are infected one by one by a monstrous contagion that turns them all into beaked, feathered, flesh-eating zombies intent on inflicting fast food mayhem on the surviving humans. Can Arbie and Wendy fend off the fiends before they become the next meal? 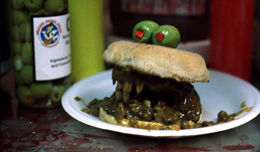 Aggressively gross, stupid, and sophomoric, Poultrygeist is also rip-roaring fun if you catch it in the right mood and benefits from setting its sights higher than usual, particularly the big, gore-spraying zombie attack near the one-hour mark that gives George Romero a serious run for his money. The musical numbers range from utterly dispensable (Arbie's duet with Kaufman, both wearing skirts and little else) to surprisingly inspired, such as a topless lesbian sing-along that, judging from the making-of documentary, caused Sereboff more than a little trauma. The usual infantile Troma obsessions are here: jokes about blind people, deliberately offensive jabs at various creeds and sexual orientations, anti-consumerist grandstanding, and explosions of bodily fluids with an emphasis on blood and feces. However, what makes the difference here is the surprisingly sturdy story structure and some amazingly committed, fearless performances, with Yachanin and the pretty, very game Graham and Sereboff swiping the film as they effortlessly bounce between the numerous tonal shifts. Here's hoping we see much more of all of them in the future. The fast food jabs are surprisingly funny as well (check out the names of all the major characters); in fact, the reincarnation of the dead Jose into a cute, wisdom-spouting chicken sandwich with pimento eyes might be the funniest running gag in the entire Troma library. And at the very least, this does almost as good a job at warding viewers away from junky eating habits as Food, Inc. For Troma fans, it's also worth noting that this film closes hilariously with a very familiar car crash that seems oddly perfect. 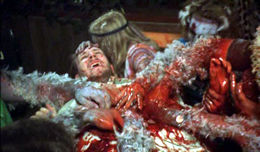 After a successful limited theatrical run that caused a surprising ruckus in some major cities, Poultrygeist made its way to DVD in two versions, a standard two-disc edition and an "Eggs-clusive 3-Disc Collector's Edition" that's frankly not that amazing, as it basically just tacks on Karaoke versions of all the songs along with some random trailers. You can probably still find it tucked away on the shelves of a few Best Buys if you look hard enough. In any case, the DVD contains an anamorphic transfer that's the best-looking transfer of any Troma film to date, though it's hampering by some distracting motion blurring, interlacing issues, and way too much compression to fit in on the disc with a horde of extras. Speaking of which, the goodies include an audio commentary by Kaufman and co-writer/editor Gabe Friedman that lays out the basic groundwork of how the film came to be and some of the many, many, many hurdles overcome along the way. You also get a quartet of deleted scenes (none necessary, all somewhat interesting, such as a jettisoned happy ending with Ron Jeremy), a couple of music videos, and a gory extended trailer labeled as outtakes from Bergman's The Virgin Spring. Disc two is highlighted by the feature-length (83 min.) "Poultry in Motion," an amazing documentary about the making of the film that covers everything from initial casting to the premiere. You'll see just how much trouble a poverty row budget can cause with a production of this scale, as everything from the effects to the "free talent" causes rifts in filming. You also get smacked with some surprisingly explicit nudity during the audition process, so prepare yourself. The opening cemetery sequence alone was a nightmare to pull off for reasons that will become soon apparent, and it's amazing it still holds together as well as it does. Other extras include footage from the New York premiere with the cast, footage from a roof reshoot including an appearance by Debbie Rochon, and additional short featurettes about the effects and sound editing.

However, Poultrygeist will also go down in the history books as Troma's first Blu-Ray release. Given the company's history of bumping over VHS-era masters through the entire DVD age, fans were justifiably curious about whether Troma would make the leap to HD by bumping up the old version or actually delivering the goods. Fortunately the latter turns out to be the case, as the Blu-Ray fixes many of the issues with the DVD; it's much cleaer, smoother, and more film-like, with a definitve boost in detail (check out the protest signs and flyers) and much better compression. Film grain is light but thankfully still present enough to look like celluloid, even giving away a few scenes where film stock actually switches from shot to shot. Some occasional black flecks appear on the left side of the screen during the first and last reels (a flaw also on the older version), which seems to be an issue with the original source material itself. (Bear in mind also that the opening company logo and much of the cemetery sequence, which was actually shot at night, still look kind of cruddy.) Sound is also punchier and features better separation during the musical numbers. Hi-def junkies still won't do cartwheels given the nature of the film and its scrappy shooting conditions, but all in all it's heartening to finally see a Troma film on home video looking like this. The Blu-Ray ports over all the extras from the standard two-disc edition apart from some Troma cross-promotional trailers and the obligatory Kaufman intro, which is replaced here with a new, shot-on-HD intro about the company's move to Blu-Ray (dubbed "Brown-Ray" here, of course) complete with a pretty funny demonstration involving a Tromette. However, this release also sweetens the deal by adding a new commentary track with leads Yachanin and Graham that's pretty much worth the upgrade itself as they give an actor's perspective on the shooting and recall some wild stories from the set, with the antics of the cast and crew taking up much of the time along with some hilarious observations during their unforgettable first scene together. Given the low price tag and added value, Troma fans should... ahem... cluck with delight.