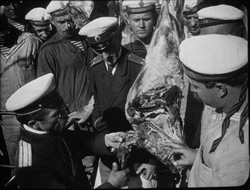 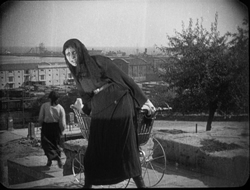 One of the essential building block films for modern cinema, Sergei Eisenstein's Battleship Potemkin has been absorbed so completely into the language of film that many newcomers may not even appreciate how influential it is. The political aspects of the film, only the director's second, have largely been overshadowed now by its groundbreaking technique including the rapid-fire editing of the legendary Odessa Steps sequence, though it's also a valuable historical depiction of a ship crew's rebellion against their callous Tsarist superiors (symbolized by the unforgettable image of maggot-infested meat). Interestingly, the film was so impressive to audiences of all political stripes that its propagandist aspects didn't prove to be much of a barrier getting it into theaters in America, though the story wasn't quite the same in England. There the BBFC considered it off limits for public exhibition, though cinema clubs exempt from their rules were allowed to show it in special cases. Four years after its release, Battleship Potemkin was presented by the London Film Society on a double bill with Drifters, John Grierson's documentary about a herring fishing ship from Scotland to East Anglia, which was stylistically indebted to Eisenstein's film (incredibly kept from wide public UK exhibition until 1954) and proved to be influential in its native country as well.

Battleship Potemkin was essentially considered a public domain film for decades, a status that proved to be both beneficial (since it could be shown and distributed widely, making it easy to see and study) and destructive (since elements weren't treated kindly over the years, and subpar edited versions were usually used to create video masters). Finally a much-needed restoration was undertaken by the Filmmuseum Berlin-Deutsche Kinematek, the British Film Institute, and Kino Films, with extremely impressive results which provided the most complete edition possible. This version also features the film's first official score, created for its Berlin debut in 1926 by Edmund Meisel. This edition mad 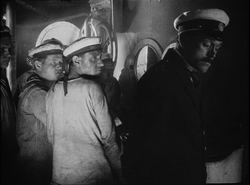 e its HD debut in 2010 from Kino in the United States, sporting a DTS-HD 5.1 track, a photo gallery,

an eight-page booklet with liner notes by Bruce Bennett, and a 42-minute German documentary about the film's history and restoration for the new edition's premiere in 2005.

The 2012 BFI release (dual format as usual with both Blu-Ray and DVD discs) takes a somewhat different approach, presenting the same restoration in an equally superb 1080p edition with PCM 5.1 and 2.0 audio options. However, the title header of "The Soviet Influence" (making its reappearance after their pairing of Turksib and Night Mail) gives a good indication that there's a lot more to come, beginning with the co-feature. Also presented in a new HD transfer with the original tints, it features a score by avant garde beatboxer Jason Singh and looks rather good if nowhere near the sharp precision of the first film.

Grierson's "Granton Trawler" comes next, an 11-minute short film from the GPO Film Unit which represents the transition here to sound filmmaking and is basically a non-narrative atmospheric snapshot. Some unused snippets from Drifters were used along with other GPO elements to create "Trade Tattoo," a 1937 six-minute short by Len Lye. Finally the 32-minute "North Sea" from 1938 is Harry Watt's cinematic recreation of seaman fighting a rough storm at sea, decades before George Clooney and company battled a fake CGI version. Finally you get a thick booklet containing liner notes by Henry K. Miller, Patrick Russell, and Michael Brooke. It's loaded with useful material and should probably be read before jumping into the set as it covers Grierson's background as critic and documentarian as well as a fascinating account of Eisenstein's visit to England to appear at classes and a screening of his film.