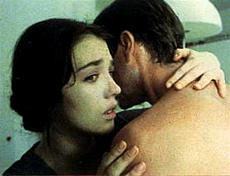 The best known and most widely distributed film from idiosyncratic Polish director Andrzej Zulawski, Possession combines his familiar themes of thwarted love and psychological torment with a completely insane parable about monsters and murder in Berlin, a combination one doesn't see on the screen very often. Many viewers have been known to run screaming from this film, which is deliberately abrasive and queasy from the opening scenes and never stops to let the audience breathe. However, those who know what they're getting into should be receptive to Zulawski's challenging, fascinating layering of interlocking symbols and storylines, which forces one to connect the dots and fill in plot threads more than any American film would ever dare.

Returning home from a vaguely defined government mission, Marc (Sam Neill) is alarmed to discover that his relationship with his wife, Anna (Isabelle Adjani), has disintegrated into complete disgust and hostility. Completely oblivious to the needs of their young son, Marc and Anna viciously rip into themselves and each other, both literally and metaphorically. Marc hires private detectives to follow Anna and learns that she has a lover, Heinrich (Heinz Bennent). However, Heinrich believes that Anna has yet another lover she meets in a grungy apartment; unfortunately, intruders quickly learn that Anna's secret companion is not exactly human. 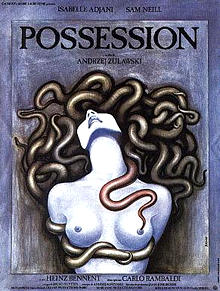 A technically astounding film, Possession's camera wavers and swerves constantly under the steady hand of master cinematographer/director Bruno Nuytten (Adjani's lover at the time), while Zulawski obviously relishes the opportunity to vent his own personal demons on such a broad canvas. Neill and Adjani truly seem to be possessed in this film as they scream almost every line, their dilating eyes always transfixed by some force beyond the viewer's perception. Adjani's award-winning performance defies any rational description as she alternates between the character of Anna and her peaceful doppelganger, the schoolteacher Helen, who becomes Marc's bed partner. Anna's showstopping miscarriage in a Berlin subway has become known as the film's outrageous high point, but frankly, it's hard to find a peak in a film constantly on the verge of a total breakdown. Most people acquainted with European cinema have already heard the stories of the butchery performed on Possession when it hit American theatres in 1982. Not only did it lose 50 minutes, but the distributors randomly reshuffled entire sequences from the middle of the film to the beginning, wiped over the music score with a droning batch of generic horror cues, and bathed the edited climax in garish solarized effects for no discernible reason. The result was a hobbled, gibbering mess that did nothing for the reputations of anyone involved.

The longer cut became available in a nicely transferred letterboxed Japanese laserdisc from Daeie (and a subsequent DVD with non-removable Japanese subtitles), though the prohibitive price tag caused many horror fans to resort to bootleg tapes instead. UK viewers could also find two VHS editions of the complete print, first in the early ‘80s from VTC and then in the late ‘90s from Visual. Not surprisingly, Anchor Bay's DVD lays waste to all previous versions with a beautiful uncut, widescreen transfer that perfectly captures the film's unearthly blue and green color schemes. Much of the film was shot on varying types of stock footage, resulting in deliberate film flaws and grain in some sequences, so this edition of Possession is, relatively speaking, quite pristine. The audio is noticeably cleaner than the Japanese disc, with many lines of dialogue now easier to understand. Zulawski also appears for a fascinating, invaluable commentary track which thankfully leaves many of the film's tantalizing questions still unanswered. Instead he discusses the circumstances under which the film was produced, why it takes place in Berlin, how his World War II upbringing influenced his psyche (check out the last scene), and how he addresses the issues which run throughout his body of work. Other extras include the US (1.85:1) and European (2.00:1) trailers; for once the US one is a lot more entertaining and tantalizing, a much finer piece of work than anything in the American cut of the film itself.