A film as famous for its tumultuous production and distribution history as its overall quality (which is considerable), this magnificent horror/fantasy adaptation of the classic Stephen Vincent Benet story offers a twist on the durable Faust saga with a distinctly Americana twist. The storyline is 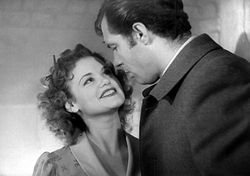 simplicity itself but filled with memorable flourishes; New England farmer Jabez Stone (James Craig) makes a deal with the devil, offers to sell his soul in exchange for a good luck streak. Sure enough, a tobacco-puffing Old Scratch (Huston) appears in the barn doorway and offers seven years of good fortune. His family, including wife Mary (Anne Shirley) and mother (Jane Darwell), benefits from the results, but Jabez notes a few odd occurrences over the next few years, such as the supernatural arrival of sexy nanny Belle (Cat People's Simone Simon), one of the devil's more attractive minions. When the deadline for payment finally closes in, Jabez panics and solicits the aid of legendary lawyer Daniel Webster (Arnold), who accepts the case under extremely perilous circumstances: if he loses the case before a jury of famous damned men, both the lawyer and his client lose their souls to Old Scratch.

The Devil and Daniel Webster was released the same year as Citizen Kane and in many respects is the horror/fantasy equivalent to that legendary film. Like a colonial etching sprung to life, this is a visual marvel with expert use of light and framing; the device of streaming light as a harbinger of evil is a terrific reversal of expectations (and technically more accurate in theological terms), while the pacing and 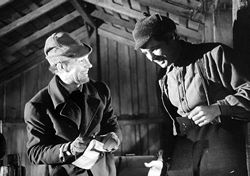 performances are honed to perfection. Huston and Arnold get the juiciest dramatic moments, of course, but the charming Simon also makes a searing impression in her limited screen time. Like Kane (which shares the same composer, Bernard Herrmann), this is filmmaking but also more than a bit chilly and austere at times; director Dieterle later imbued a bit more passion in the sloppier but more heartfelt Portrait of Jennie. However, that's a minor quibble with what is absolutely essential viewing for lovers of film fantastique.

Financed as an independent production and subjected to endless recutting and retitlings, The Devil and Daniel Webster (widely shown as All that Money Can Buy) became something of a critical cause for film restoration during the early 1980s. Eventually Criterion restored the film to an approximation of its original condition with a welcome laserdisc in the company's early days, the 85 minutes of pristine material were fleshed out with recovered 16mm footage of the excised scenes, resulting in a patchwork of a vital cinema classic. The DVD goes one better with a transfer as close to immaculate as this film will probably ever be; while the restored footage is still identifiable by a very slight image softness, the results are much smoother and cleaner. Element damage is extremely minimal; there's a barely visible hairline scratch during the extended 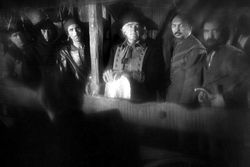 opening sequence, but for the most part this is a very satisfying presentation similar to the restoration done on Warner's The Thing (from Another World) disc. Carried over from the laser is an excellent audio commentary by film historian Bruce Eder and author/Herrmann expert Steven C. Smith; it's an extremely fast-paced and informative talk, still one of the finest in the Criterion canon. The reasons for the film's troubled history are laid out in detail, with much attention paid to the use of historical details (both visual and musical). The rest of the supplements, amusingly tucked away as a "Scratch's Notebook," kick off with a video comparison between the finished product and an alternate preview version entitled Here Is a Man. The editing differences are fairly minor, but it's an instructional look at the tweaking done to a film on its road to release. In a nice companion piece to the commentary, Herrmann's music score is analyzed on a cue-by-cue basis; written comments are provided for each composition, after which one can skip to many of the musical highlights of the film. Other goodies include a radio production by the Columbia Workshop (with Herrmann music), an extensive gallery of behind-the-scenes photos and promotional materials, a written essay by author Tom Piazza, and most interestingly, a reading of the original story by Alec Baldwin, whose own production of the same story encountered even more drastic difficulties before its eventual completion.