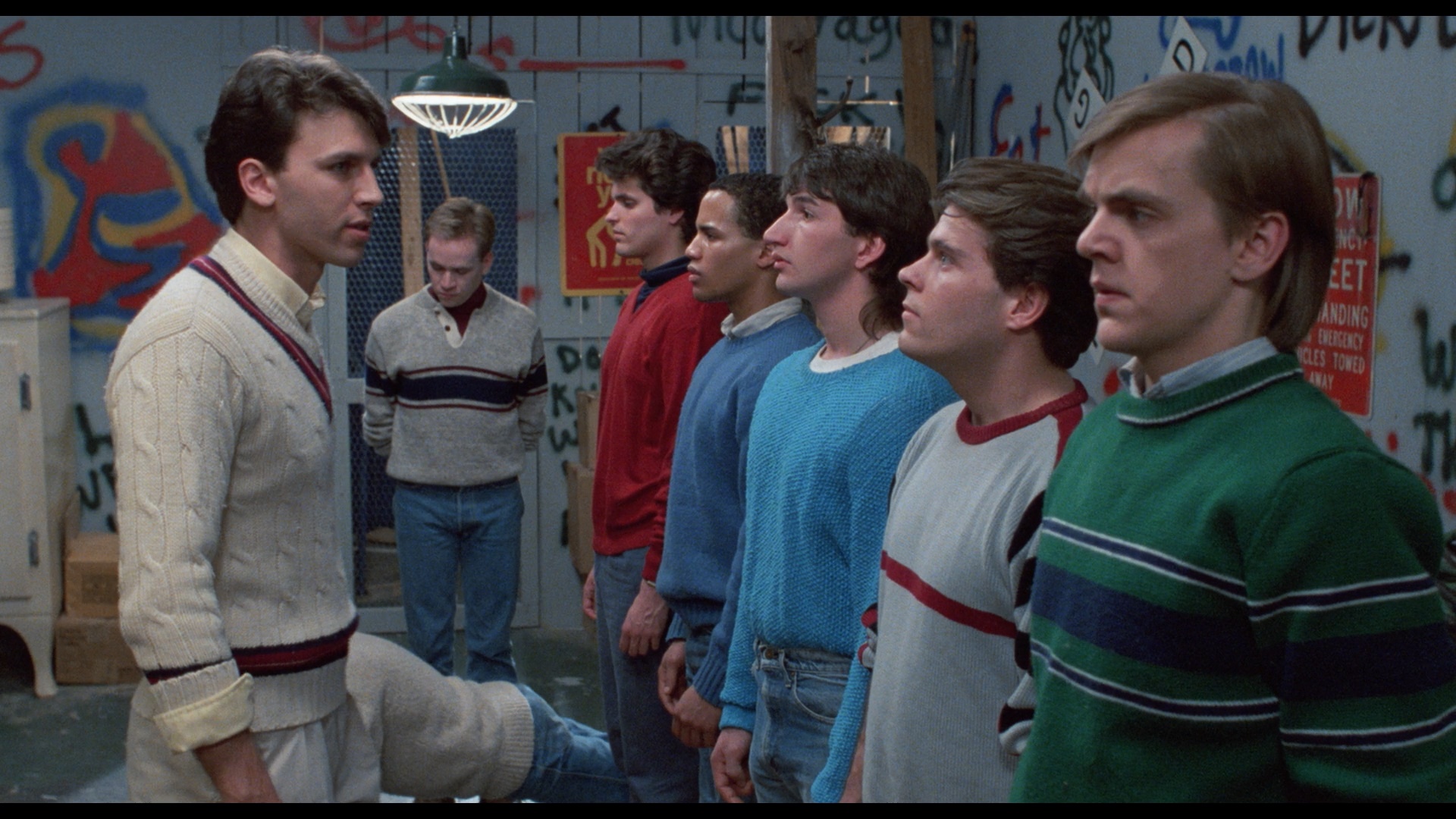 of those strange hybrids that crept 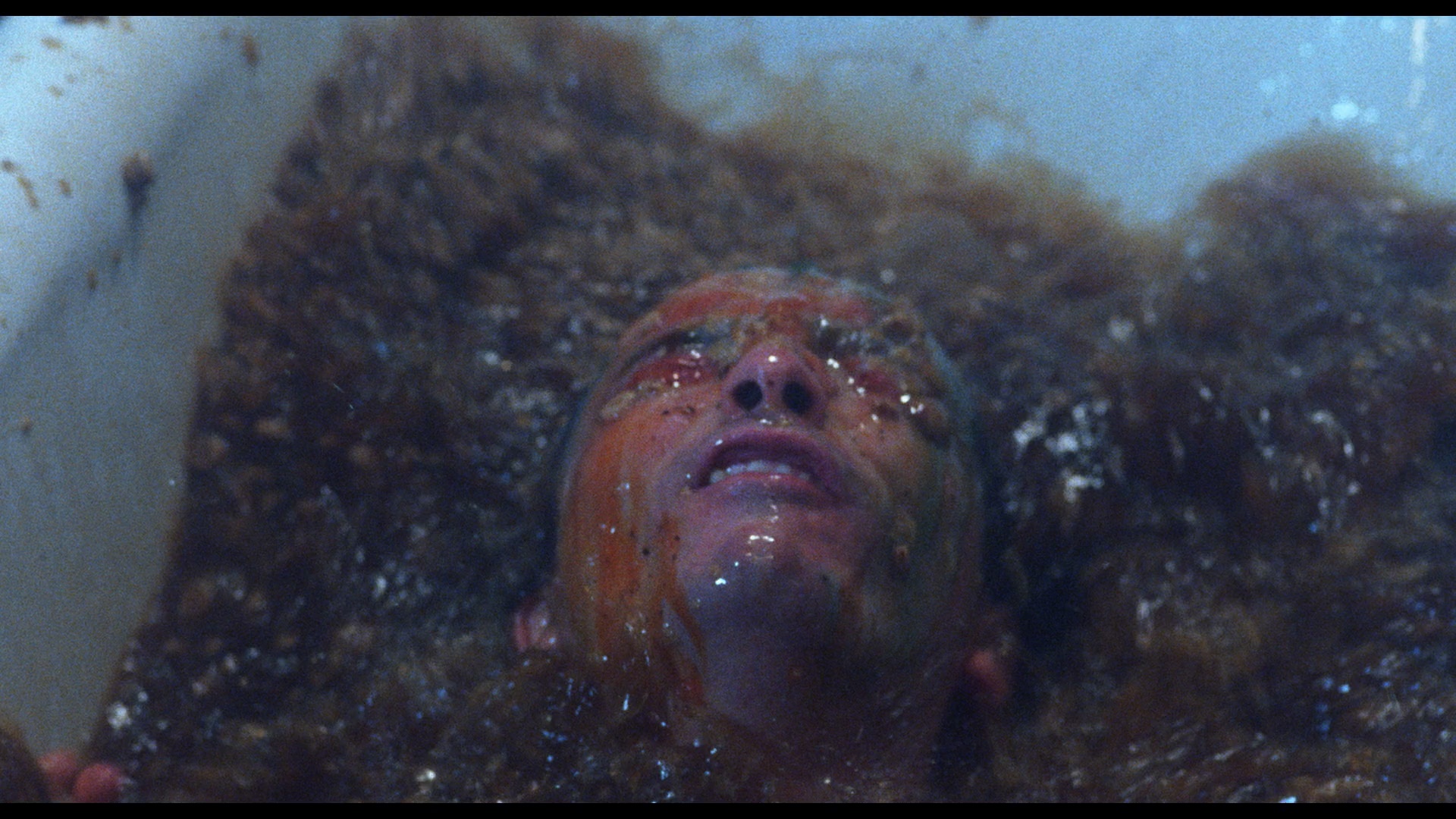 out during the dying gasps of the original slasher phase when filmmakers started throwing strange supernatural twists into the mix, Pledge Night seems like your average campus horror movie but actually delivers something much quirkier-- and ultimately more memorable. On top of that it features a small but key role for Anthrax singer Joey Belladonna, which would explain the band's presence on the soundtrack as well.

At a typical American fraternity where everyone's focused on ridiculous hazing rituals and pranks instead of studying, the latest batch is being put through it with particular fervor by their potential brothers. Most of the activity tends to involve butts, strippers, blowing stuff up, or any combination of the three, but eventually we find out that the frat has one dark secret in its past: Sydney Snyder, a.k.a. "Acid Sid," who was supposed to take a gross bath in cornflakes and body fluids but instead got doused in acid. Supposedly he died, but soon a gruesomely disfigured Sid (now played by Kempe) is back on campus and looking for blood. Everyone ends up being picked off one by one by a wisecracking force that seems to be a lot less than human than it initially appears.

Originally shot in 1988 (which makes sense), Pledge Night barely made a blip when it was released on VHS by Imperial Entertainment in 1990 to satisfy the high demand for horror product in the rental market at the same time labels like Troma were riding high. The original distributor, Shapiro Glickenhaus, had to trim the film down thanks to an incensed Jack Valenti at the 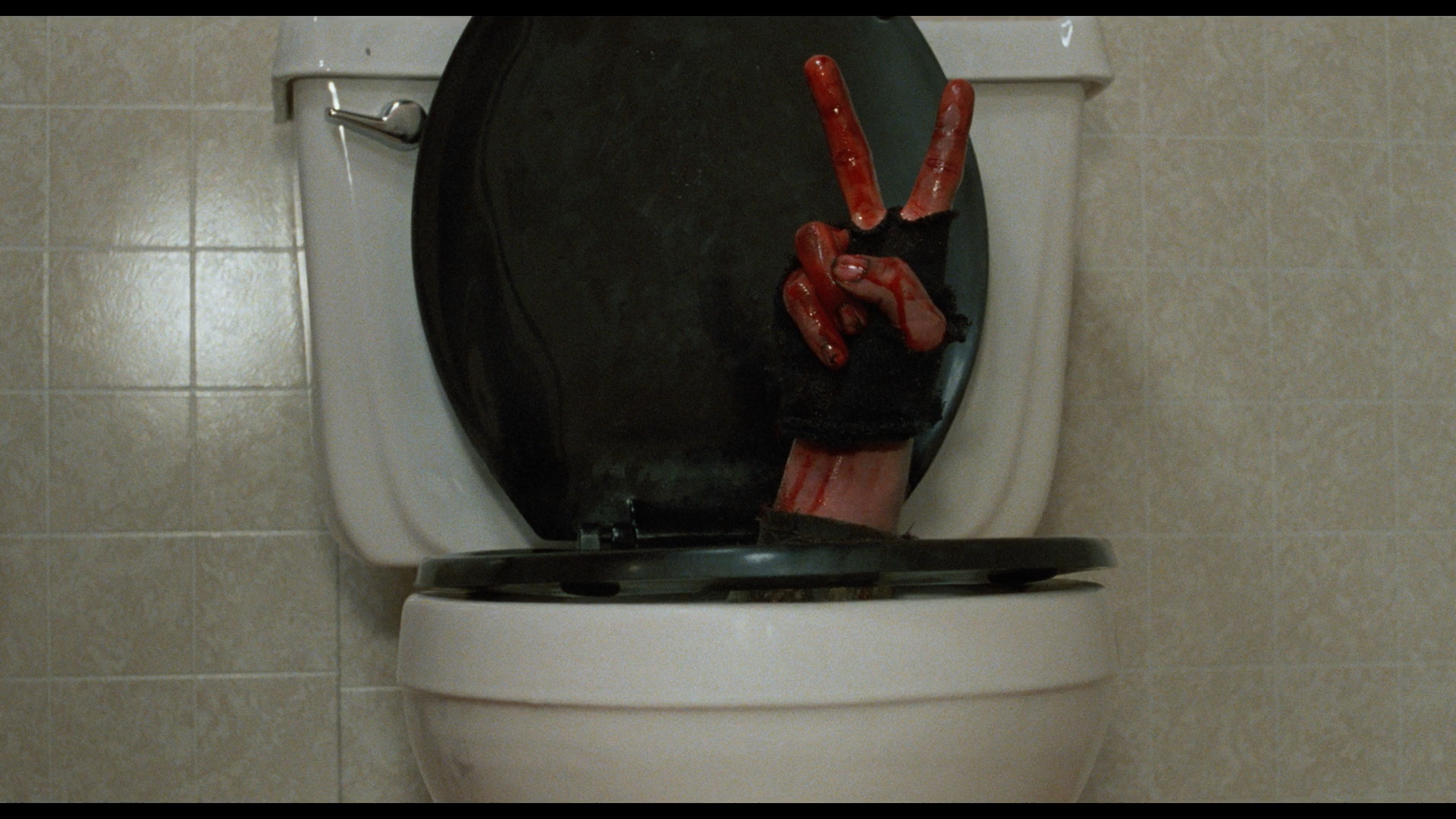 MPAA who demanded five different submissions before it could get an R rating. 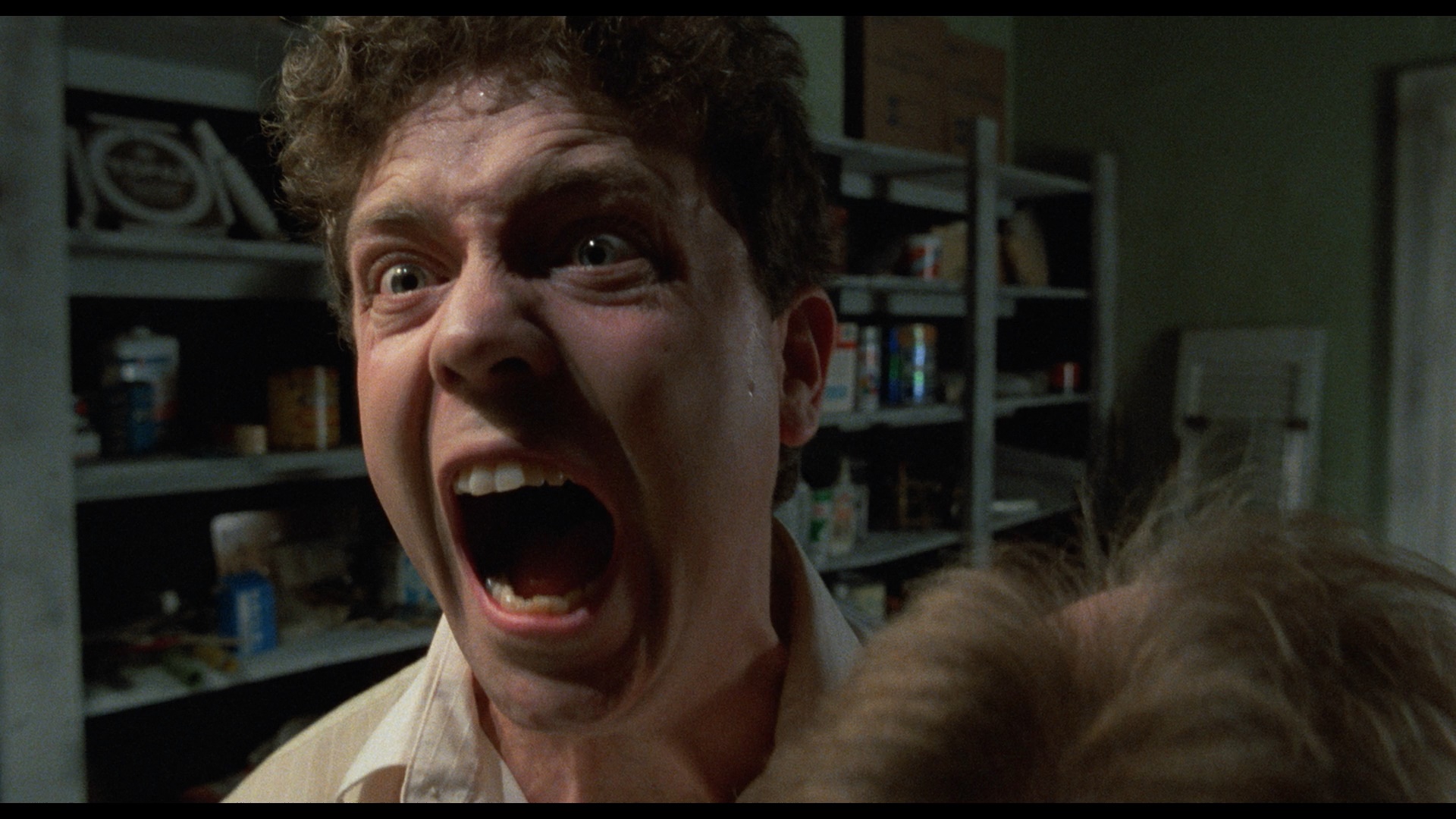 Regardless, the end result has a unique structure with the first half essentially functioning as a raunchy college sex romp before it suddenly shifts gears halfway through into a very gory, twisted body count film. It's definitely not a typical title to throw on for horror newbies who might wonder what the heck's going on for the first 45 minutes, but if you want something pretty crazy and definitely different, this one goes all out to keep you entertained.

Apart from a handful of various DVD editions in Germany (as Pledge Class), this film has flown mostly under the radar for a very long time until the 2019 edition from Vinegar Syndrome (as a Blu-ray and DVD combo pack as usual). The new 2K transfer from the original camera negative looks as gorgeous and immaculate as you'd expect from the label's track record, injecting fresh new life into a film that's never been seen in prime condition before by the general public. The DTS-HD MA English 2.0 track is also in good shape and much crisper than the old tape by a long shot; optional English SDH subtitles are provided. In the new featurette "Hell Weeks" (15m22s), director Paul Ziller talks about studying alongside other little names like Spike Lee, Jim Jarmusch, and Barry Sonnenfeld, as well as making this film deliberately for the "home video boom." He also goes into great deal about the MPAA problems that eventually led to a complaint to the Justice Department! In "Graduating to Horror" (10m44s), writer-producer Joyce Snyder explains how she came 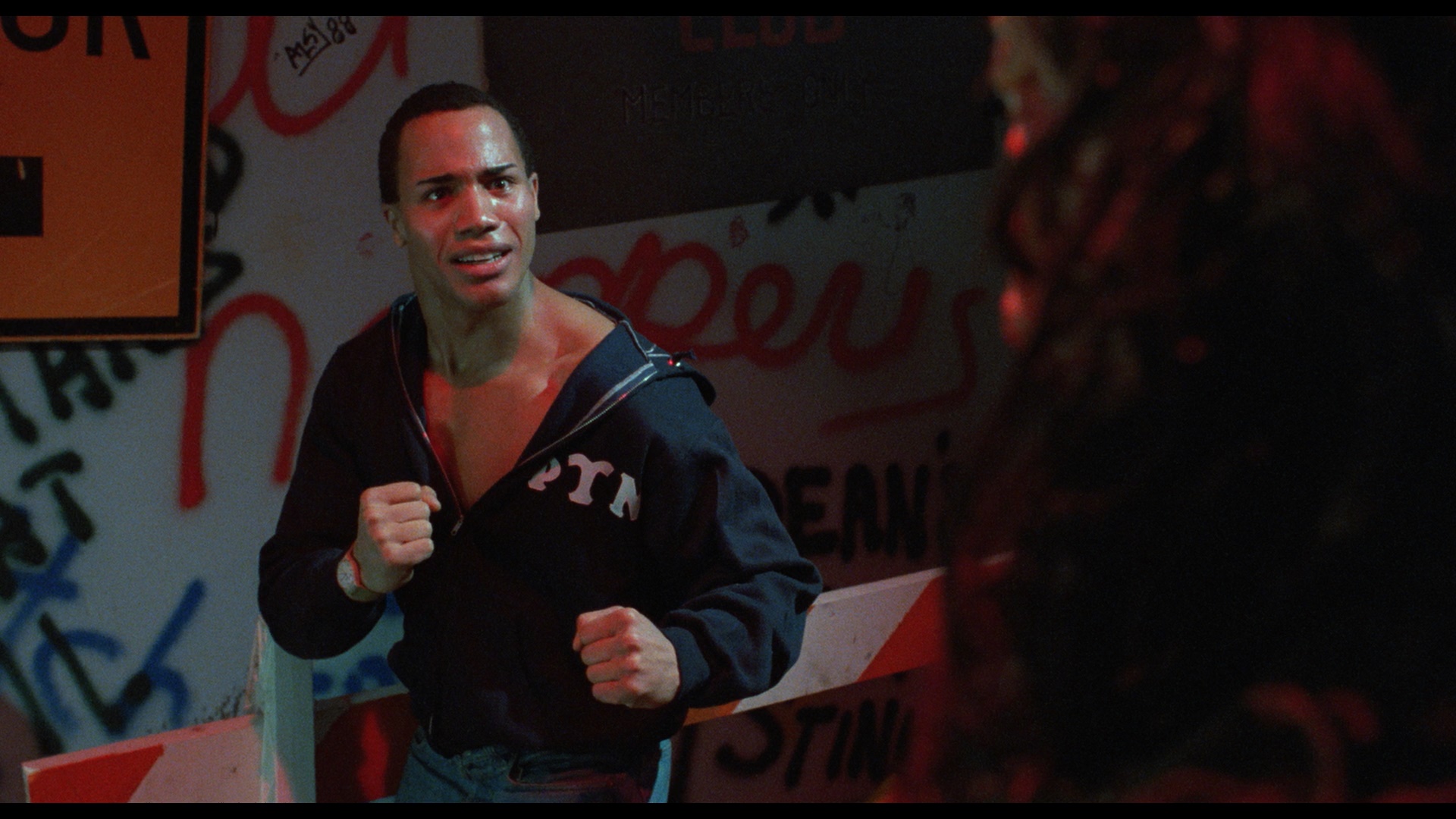 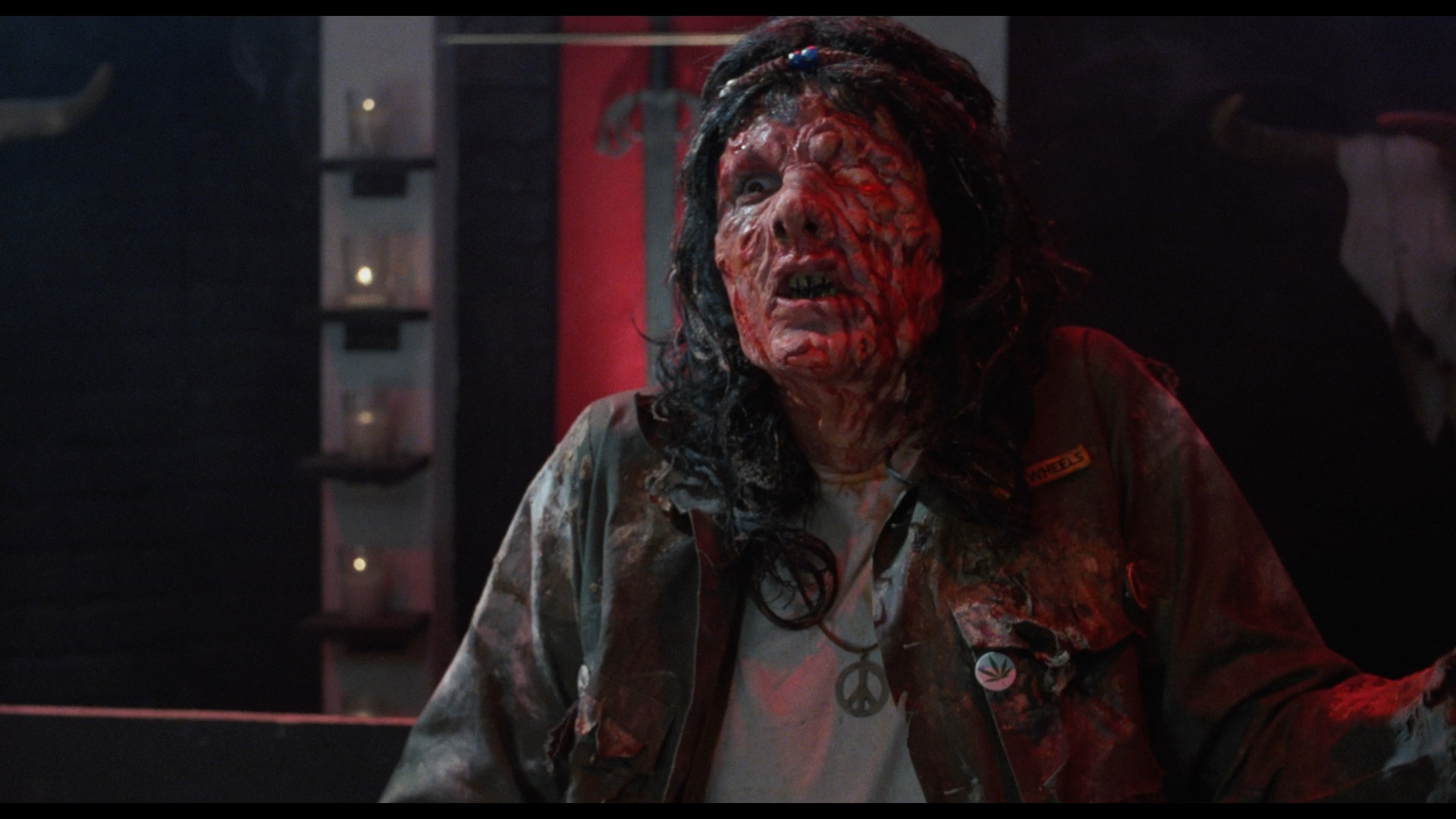 while working as the editor for X-Rated Magazine and did extensive research on hazing to make the film as accurate as possible. (Yep, the egg and cherry stuff and the pig parties are all based on fact.) She also has praise for the late Dean Kartalis, whose extensive makeup work gave him the roughest time on the set. Amusingly, she also reveals that Belladonna was the only real whiner during production even though he had the least to do. In "The Bad Man” (27m6s), actor Arthur Lundquist chats about his acting career and how being willing to look stupid helped him get cast more than his peers. He also goes into the inspiration he took from The Creeping Unknown and the conception process behind Vicious Sid as a maniacal hippie at the center of the film's "slow descent into the supernatural." Finally, “Hazing From Hell" (12m32s) with actor Robert Lentini touches on his entry into acting through a guerrilla project around Times Square and getting hired through Backstage, which was the source for pretty much everyone who ended up on this film. He also admits that "I think I picked up a cherry" during one of the more outlandish scenes. Also included are the theatrical trailer and a location featurette (2m59s) with Snyder narrating a video tour including various spots around Rutgers. The release also comes as a limited embossed slipcover edition.