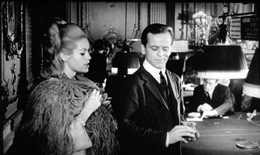 Though the title conjures up a naughty European romp in vein of the same year's Radley Metzger hit The Dirty Girls, this charming little slice-of-life portrait of mid-'60s English youth is actually more closely affiliated with the previous year's The Pleasure Seekers (itself a remake of Three Coins in the Fountain), which let three fun-loving girls loose in Spain. Here we have five bright young women living in the same Chelsea neighborhood who spend a memorable weekend discovering themselves and undergoing life changes ranging from the minor to the drastic. Most of the events are seen through the eyes of Sally (Dune's Annis), the latest arrival who's about to start modeling school. At a Guy Fawkes party she catches the eye of Keith Dexter (Deadwood's McShane), a skirt-chasing photographer with a sensitive streak. Meanwhile the more well-off Dee (Lust for a Vampire's Leigh) is having an affair with gambling slum lord Nikko (Kinski, of course), who's still married and tends to push his tenants around. Then there's Marion (Nichols) who finds herself pregnant by a very unreliable father, the lovelorn Angela (Doctor Who's Wills) looking for love in a landscape of prettier people, and Aussie emigree Cobber (Fitzpatrick) tr 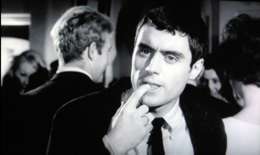 ying to fit in among the swinging scene.

Snappy, brisk, and entertaining, The Pleasure Girls was the second feature film for director Gerry O'Hara, who's been experiencing something of a revivial courtesy of the BFI with the releases of That Kind of Girl and All the Right Noises. Together the films form a neat trilogy of sympathetic portrayals of the pitfalls of love in modern England, with this entry definitely the cheeriest and most visually flamboyant of the bunch. From a firework-festooned party to a glittering gambling hall and even a mild orgy, the film never looks less than terrific and provides a solid showcase for a cast loaded with familiar, extremely young faces; McShane in particular looks like a little kid! One of the most fascinating elements of the film is the casual, positive portrayal of neighbor Paddy (Tanner) and his boyfriend a mere four years after the indendiary release of Victim began to assault England's anti-homosexuality laws. It would be years before American films were this comfortable with the concept, and here his rapport with the girls remains one of the film's highlights; you can easily see him and Wills spinning off into their own version of Will and Grace. 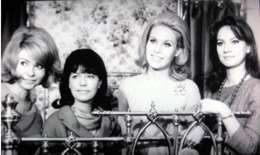 Easily keeping up with the BFI's sterling track record of Flipside releases, The Pleasure Girls features a gorgeous black and white transfer that really pops on Blu-Ray. Detail is exceptional throughout, and element damage is nearly nonexistent. Top marks from top to bottom. The disc is one of their dual-format releases with a DVD on the flipside, though only the Blu-Ray also contains the film's alternate export cut which clocks in a minute longer but actually contains several minutes of alternate footage, mainly some coy topless shots and some mild S&M with Kinski! The alternate bits are provided as a separate extra on the DVD. Along with the theatrical trailer, he two other video supplements are a pair of short films from the same period involving romance in '60s London, James Scott's "The Rocking Horse" (1962, about a female painter romancing a teddy boy) and Mamoun Hassan's "The Meeting" (1964, a dialogue-free exercise in style about a woman meeting her lover at a train station). Both are intriguing miniatures and worth watchinig. The disc comes packaged with an essential thick booklet containing appreciative liner notes by Sue Harper (who traces a few of the then-current events which inspired aspects of the story), recollections by O'Hara (who talks about being booted from the final cut which led to the pretty lackluster theme song being tacked on at the beginning), an O'Hara bio, and notes about both of the shorts by Hassan and Christophe Dupin. A real pleasure all around.