Apparently H.G. Lewis leading man William Kerwin (or as Blood Feast fans know him under his nom de sleaze, "Thomas Wood") was too busy to star in the third and last installment of the director's notorious Blood Trilogy, Color Me Blood Red, but Kerwin later teamed up with his younger brother, Harry, to pen and star in a jaw-dropping twist on the same plot, Playgirl Killer. Also known to late night trash TV viewers during the '70s and '80s as Decoy for Terror and Portrait of Fear, this one doesn't really 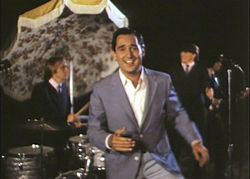 deliver in the nudity department and only offers a few scant splashes of gore, but don't let that scare you away from this pure, unadultered slice of Z-grade drive-in heaven.

Struggling artist Bill (Kerwin) is desperate to create his masterpiece, a painted tableau of beautiful women in Greek mythological outfits standing around in a lot of fog. Unfortunately his attempts to translate this vision to canvas are stymied by his first model, whom he drags out for sketches near a mountain lake. She refuses to sit still for long and begins giggling at the would-be Picasso, so he responds by firing a speargun into her chest. After the main titles play out over Bill being chased through the woods, we cut to a nocturnal shindig where bikini-clad girls are go-go dancing their hearts out around the swimming pool while a pudgy Neil Sedaka sings the unforgettable "Waterbug." (Apparently Sedaka was so pleased with his "Jellyfish" theme song in Sting of Death three years earlier that he had to encore with another nautical creature ditty.) Here we meet most of our future female victims, including primary target 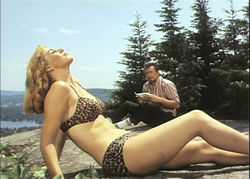 Arlene (Jean Christopher) who's seen snuggling up to the crooner in the film's most terrifying moment. At this happy estate Bill takes a job as a handyman and spends his free time bumping off young ladies, then stashing their bodies in the basement where he continues to paint his heart out.

As if the sight of a goateed, overacting Kerwin doing his crazy artist routine weren't enough, Playgirl Killer is stuffed with enough late '60s kitsch to keep trashhounds giddy with delight. The funky lounge score, day-glo outfits, hideously "elegant" decor, and wooden acting all combine for a cheapo delight. The film does work up a few memorable images thanks to the frozen female bodies on view during the finale, which caps off with an amazing comeuppance guaranteed to raise a chuckle or two. 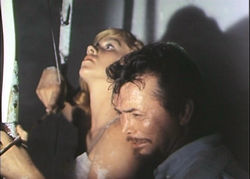 Though it bypassed regular U.S. theatrical venues, Playgirl Killer was trotted around the TV wasteland by New World and eventually turned up on that company's video label in the mid-'80s (with a later reissue by Anchor Bay under the Starmaker label). Though not known for its top of the line transfers, the Platinum DVD offers a surprisingly sharp appearance with some wonderfully bouncy and saturated colors. Like most of the H.G. Lewis films this so closely resembles, this sickie was shot open matte at 1.33:1. (Masked off to 1.78:1 or so on a 16:9 display it still looks fine, however, apart from some tight opening credits.) For the laughably low price tag, this one should be a no-brainer. The disc also contains gushing bios for Kerwin and Sedaka, but the real doozy is New World's howler of a video teaser, consisting of soft focus "erotic thriller" style cheesecake photos and ominous narration, accompanied by Rick Wakeman's theme from Crimes of Passion! It's hard to imagine how short-changed video patrons must have reacted when they actually set eyes on the movie itself...