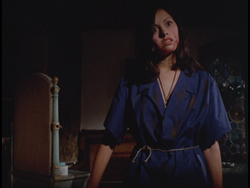 Considering he had hundreds of films under his belt before his death, 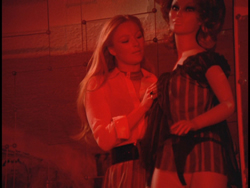 it's challenging to determine the busiest period in the career of director Jess Franco, who could bounce between idiosyncratic horror films, sex comedies, and erotic mindbenders in the span of a week. However, he was really on fire between 1973 and 1974, a period in which some of his best work with producer Robert de Nesle remained unseen for decades by most English-speaking fans. Among the highlights of this fertile period were Countess Perverse, Lorna the Exorcist, Sinner, and this particular film, released by Mondo Macabro under its obscure UK release title of How to Seduce a Virgin but better known among Franco fanatics by its evocative French name, Plaisir à trois. It's also a significant entry in Franco's career as it offered the first significant role for Lina Romay, who became his companion for life and his primary screen siren in an increasingly astonishing roster of exhibitionistic performances.

Shot in the Canary Islands in 1973 back to back with Countess Perverse (which shares essentially the same cast), the film recounts the simple but twisted tale of Countess Martine de Bressac (Franco staple Arno), a libertine existing in a private erotic realm of her own creation alongside her equally decadent husband, Charles (Woods). We already know she's a bit off since she's done time in an asylum after hacking off the manhood of one of her lovers, and now the happy couple also keep a collection of immobile human captives (who seem to be almost but not quite dead) posed in the gothic basement of their estate. Also on hand are their mute house girl Adele (Romay), the odd manservant Mathias (Vernon), and even a 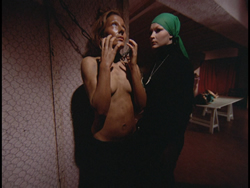 voyeuristic gardener (Baillou). However, everything changes when the debauched couple spies a young woman, Cecile (Busselier), pleasuring herself on the grounds nearby, and with a little parental manipulation, the girl soon becomes their house guest. 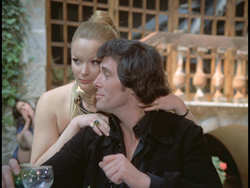 Twisted fun and games ensue as Martine and Charles decide to corrupt the girl as much as possible, with the other inhabitants taking stabs of their own as well.

Though it flirts with elements of horror and the director's most obvious literary inspiration, the Marquis De Sade, How to Seduce a Virgin has an oddly quirky, artistic atmosphere that makes the subject matter more palatable than one might expect. There's a huge amount of sex, of course, including Franco's beloved recurring scenario of scantily clad women performing with mannequins, but the film's visuals are also worthy of other European art house practitioners of the time. The villa's striking, angular construction makes for some eye-catching compositions throughout the film, creating an effective sexual battleground as well as an effective filmic fantasy where the usual rules of right and wrong don't seem to apply.

As with Franco's other elusive French productions from the same time, this film was given a much-needed restoration for an uncut release on home video. This debuted first on French DVD at the end of 2012, albeit without any English language options whatsoever. A much better option is the Mondo Macabro release, which finally features English subtitles and looks gorgeous. It's a much darker film overall than Countess Perverse so the transfer pop quite as much, but given the source material, it's hard to imagine it looking any better in standard def. The articulate, perceptive Stephen Thrower turns up for another video analysis, this time a 21-minute dissection of the film's production and themes including its obvious voyeuristic slant and the disquieting nature of those "dead" people downstairs. He also puts this in perspective within Franco's career at the time, explaining how it really comes part and parcel with the films around it as the actors seem to shift power dynamics between each title. Writer Alan Petit also appears for a 12-minute interview (in front of an eye-catching wall of Franco video releases) focusing on the film's literary inspirations and Franco's "love affair" with De Sade, including his frequent contemporary takes on the characters of Justine and Eugenie. Also included are the usual extensive "about the film" text essay, bios for the actors and Petit, and the usual sizzle reel of other Mondo Macabro releases, all of them about as essential as you can get.