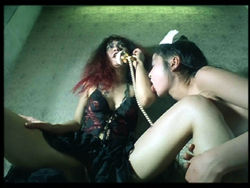 whose influence can still be felt in countless music videos. Though he only contributed two titles to date, director and former musician Shozin Fukui proved himself among the most adept at utilizing cyberpunk for a full narrative film beginning with 964 Pinocchio, a loud, aggressive slap in the face still capable of leaving viewers twitching and jittering on the floor.

Almost as indebted to David Lynch and David Cronenberg as the nascent cyberpunk template (and an odd forerunner of Spielberg and Kubrick's A.I. as well), the film follows the deranged misadventures of the title character (Suzuki), a sex slave humanoid whose latest client dumps him on the street after he fails to provide full satisfaction. Stumbling around in utter confusion, he is taken in by a young woman, Himiko (Chan), who tends to him, attempts to teach him to speak, and winds up copulating with him for one night. Afterwards she begins to treat him cruelly, chaining him to a rock and taunting him with claims that he now belongs to her alone. Meanwhile Pinocchio's creators scour the city in search of their rogue product, leading to a suitably fluid-spattered finale. 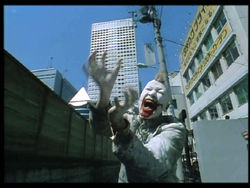 Complete with outlandish camerawork and low budget images of technology and flesh melding in a very uncomfortable synthesis, 964 Pinocchio is crafted with an extreme amount of care; its abrasive soundtrack and increasingly frenetic activity are all choreographed to achieve a desired emotional effect, including such deliberate audience provocations as explosions of blood and vomit from characters' orifices. Throw in some kinky nudity, insane dialogue, and hilarious shoplifting, and you've got a one-of-a-kind experience best viewed very late at night, preferably after a few drinks.

Widely circulated on bootleg video but more known by word of mouth, 964 Pinocchio comes to DVD in high style thanks to an immaculate presentation from Unearthed. The full frame transfer preserves the original aspect ratio (shot in 16mm), and the quality is light years ahead of the smudgy VHS versions most fans have grown to know and love. The stereo audio is 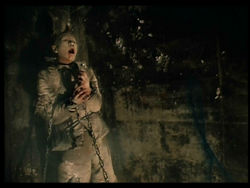 also very effective, and alternate English subtitles ensure you can chuck any fan-subbed prints into the nearest trash can. The disc also comes loaded with extras, including Fukui's 1988 32-minute short, "Caterpillar," an 8mm oddity mixing concert performance footage, a girl in a geisha outfit, and a young boy wandering a city wearing a surgical mask and having fits on crowded sidewalks. Fukui appears for a new video interview in which he spends 33 minutes covering the genesis of 964 Pinocchio, the peculiar story of how he came to become a director, and the difficulties of shooting an indie project without permits (much of the film was shot guerilla-style around an underpass, causing nearby neighbors to complain until they were paid off with boxes of candy!). He also offers a few witty observations and even a few funny self-deprecating comments ("I loved the way people said that I was stupid. That's all right with me because I am basically stupid."). Also included are trailers for Rubber's Lover, Electric Dragon 80,000 V, and Junk.

Contrary to the title, this monochromatic nerve-shredder has nothing to do with contraceptives, at least in the traditional sense. Tweaking the 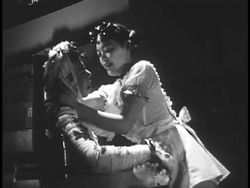 frenzied cinematic style seen in his 964 Pinocchio, director Fukui offers another serving of fluid-soaked dementia this time mainly contained within a darkened scientific lab - "the Center" - where psychic experiments reminiscent of A Clockwork Orange result in one successful mutant who becomes encased in a body rubber suit, with less than pleasant results. This rubber get-up is hooked into a system called the DDD, or Direct Digital Drive, which erodes the human will and consciousness to unleash the more primal, destructive forces underneath. When funding gets pulled, the four researchers in charge go to increasingly dangerous means to realize their work; along the way the viewer is treated to plenty of fetishistic groping, the scariest man in a speedo ever committed to film, jets of oil-black 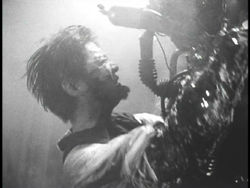 Even more than its predecessor, Rubber's Lover is powerfully influenced by the rhythms and philosophies of punk music and its progeny; the scenes move from one to the next in a jagged, disorienting fashion barely clinging to a semblance of a plot. If the point of the film is to induce a state of instability similar to the experiments onscreen, the filmmakers have to be credited with a success; this is not one to show to the faint of heart or mind. The anime influence can be felt as well (particularly the finale, which vaguely echoes the apocalyptic psychic visions of Akira), while the supporting theme of Pinocchio - that the powers-that-be, 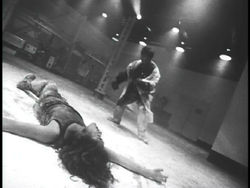 such as funded scientific groups, harm the individual and only take responsiblity for their actions when their own reputations are at stake - here becomes the primary concern, with the kinky researchers inflicting mayhem on outsiders and their own group all for the sake of an ultimately worthless brass ring. It also serves as sort of a prequel to Pinocchio for reasons best left unexplained, but it should still be viewed after for the full effect.

As with its companion film, Rubber's Lover looks excellent on DVD and greatly improves on past illicit video dupes. The black and white photography looks a bit grungy, dirty, and grainy, but that's all intentional. (Despite critics' attempts to read profound meaning into the film's look, Fukui explains on the disc he simply shot it this way because the rubber suit looked silly when filmed in color.) Extras include a Fukui 8mm color short, 1987's "Gerorisuto;" running 10 minutes, it follows a girl in a black dress terrorized and corrupted by an unseen force on a subway and turned into a vomiting mess afterwards, a la Isabelle Adjani in Possession. (Not surprisingly, this scene would later be reworked several times in both of his feature films.) Fukui also contributes another video interview, this one a shorter (20 minute) discussion about the making of Rubber's Lover. Also included are a gallery and the same three trailers found on Unearthed's Pinocchio disc.