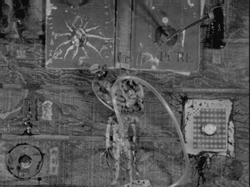 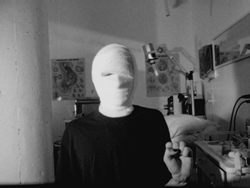 Underground cinema has always thrived on producing shocking, unshakable imagery which could never appear in front of a Hollywood camera. In the tradition of Richard Kern, Nick Zedd, Jorg Buttgereit, et al, the 16mm black and white film Pig is largely an exercise in shock value packaged as an art film, and quite an effective one at that. However, if you're even the slightest bit squeamish, approach with caution.

Co-directed by and starring indie artist and death metal performer Rozz Williams (who headlined Christian Death and hanged himself the year this film was shot), this skull-rattling 23 minute helltrain uses a barely linear narrative to explore the nature of evil and the limits of man's moral transgressions. Even more strangely, it doesn't feature a single actor's visible face or a word of dialogue (in English, anyway). A faceless maniac (Williams), whose pig mask in the vein of Motel Hell justifies the literal meaning of the film's title (seen carved on a victim's chest), abducts a young man (James Hollan) in the desert who is then subjected to a variety of ordeals. And that's about it, really, as far as the story goes; much of the running time consists of abstract collages illustrating madness, a diabolical text, sign language, an out of body experience, and so on, all accompanied by a jarring, musique concrete soundtrack. Hardly enjoyable in the traditional sense, this is a good way to drive some humility into those who claim they've seen it all.

First released on VHS in 1998 (and originally intended to be projected at music performances with an improvised soundtrack), Pig made the jump to DVD in 2002 as the first installment in Cult Epic's abbreviated Underground Cinema series comes in a limited edition DVD packed with a surprising amount of extras for such a marginalized title. Director/Cult Epics founder Nico B, who co-directed the film and also served as producer, writer, editor, and cinematographer, 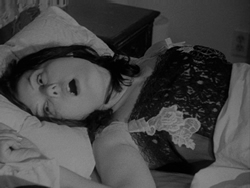 provides a commentary for both the film and a string of outtakes; he has some useful insights into the making of the film and his collaborative relationship with Williams. Other extras include an audio interview with Williams by John E. Ellenberger, a behind-the-scenes image and photo gallery accompanied by previously unreleased Williams music, a Super-8 test reel in black and white featuring the aforementioned pig gear, a tribute video by Nico B, and a very heavy, lavish booklet, "Why God Permits Evil," modeled after the text seen in the film. There's also an odd litt 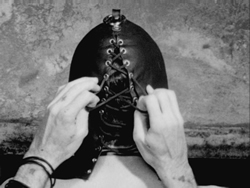 le Easter Egg showing Williams' apartment prior to filming, accessible from the unsettling menu design. Image quality is about what you'd expect for a zero budget, ragged black and white film, though the compression appears to be fine. The heavily layered soundtrack is also rendered with deeply disturbing 2.0 stereo.

Not surprisingly, the DVD sold out fairly quickly and began demanding very high prices from third party sellers. A 2012 revisit from Cult Epics brings Pig back into circulation along with a 2012 sequel of sorts, 1334, both packaged in a dual-format edition as a Blu-Ray and a DVD. 1334 (a number also seen prominently in the first film and frequently associated with Christian Death) refers to the year the Black Plague was unleashed in full force, killing millions of people. The film of the same name, directed again by Nico B., is something of a macabre meditation on Williams and his legacy (following the filming of Pig, according to the liner notes), with Bill Oberst, Jr. (who also played the lead in Abraham Lincoln vs. Zombies!) playing the tragic musician/performance artist in what amounts to an apocalyptic ghost story. Some uncredited women who reportedly figured in real-life uncanny events following Williams' death also appear in the 17-minute slice of free association, which mixes elements of gnosticism, classical art, reversed film printing, and more creepy masks into a slippery meditation on darkness and the meaning of death. 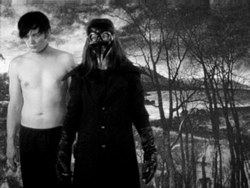 This time the extras from the prior DVD of Pig have all been jettisoned for whatever reason (music issues, perhaps?), though both films come with 2.0 stereo tracks along with pretty darn effective Dolby Digital 5.1 mixes, which push Williams' often unsettling soundscapes to each channel for maximum disorienting effect. Too bad they aren't lossless, but you can't have everything. Shot on 16mm, Pig looks pretty solid apart from the usual minor damage it's always displayed (mostly in the opening minutes). Being far more recent, 1334 looks more slick despite a generally similar, grubby black and white aesthetic. Both are presented full frame as originally shot with black pillarboxing on the 1080p Blu-Ray. The only real bonus here is the enclosed booklet, which features notes on both films and a sort of script/scrapbook for 1334 breaking down the events and elements in the film while pointing out some of the occult text references that might otherwise fly by unnoticed in the finished film. The package comes with a cardboard O-card cover (containing the original Why God Permits Evil book art) and a regular insert sleeve featuring an interesting color shot of the final scene from 1334, which plays out in black and white in the actual film.