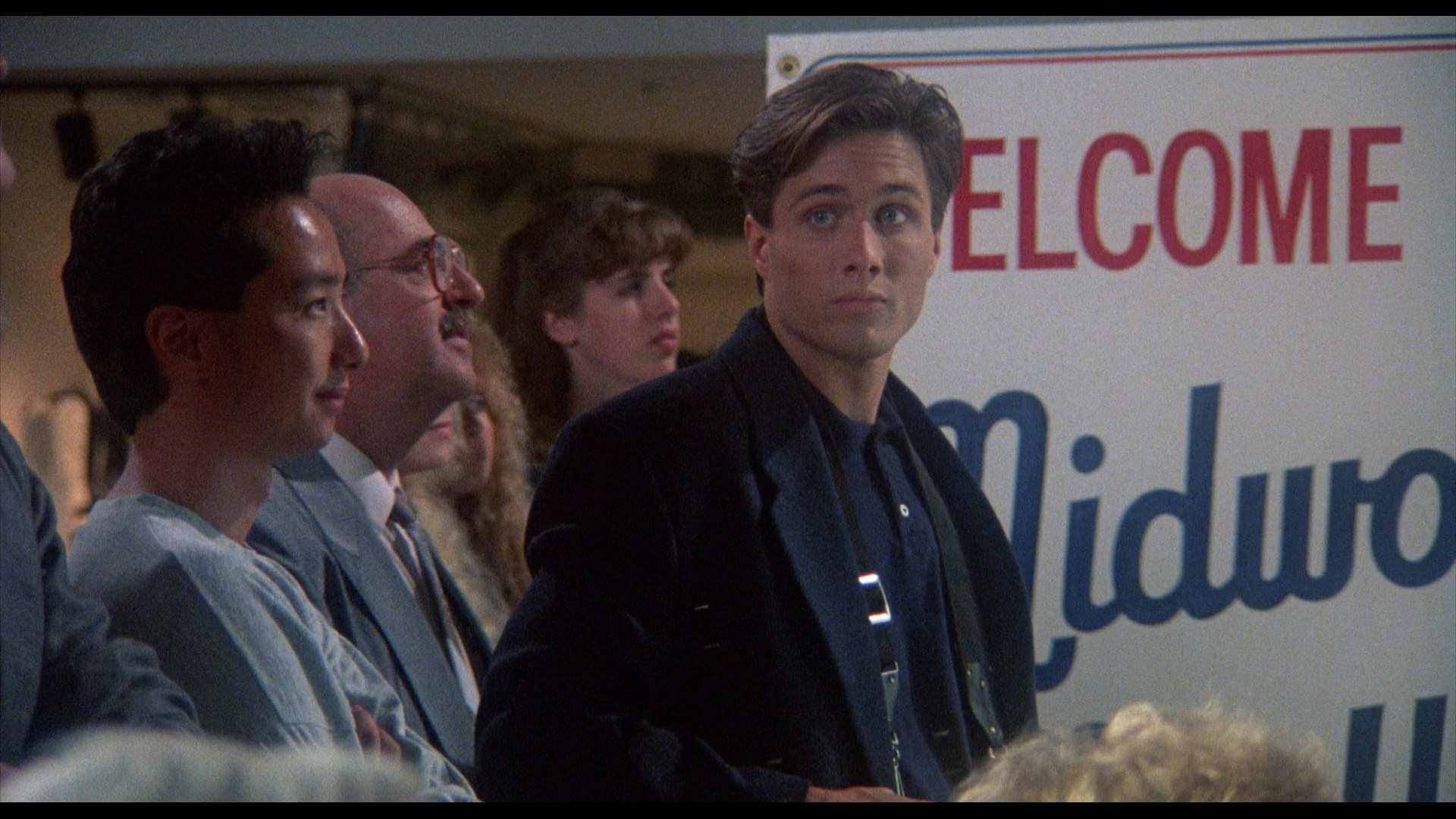 the confusingly titled Phantom of the Mall: Eric's 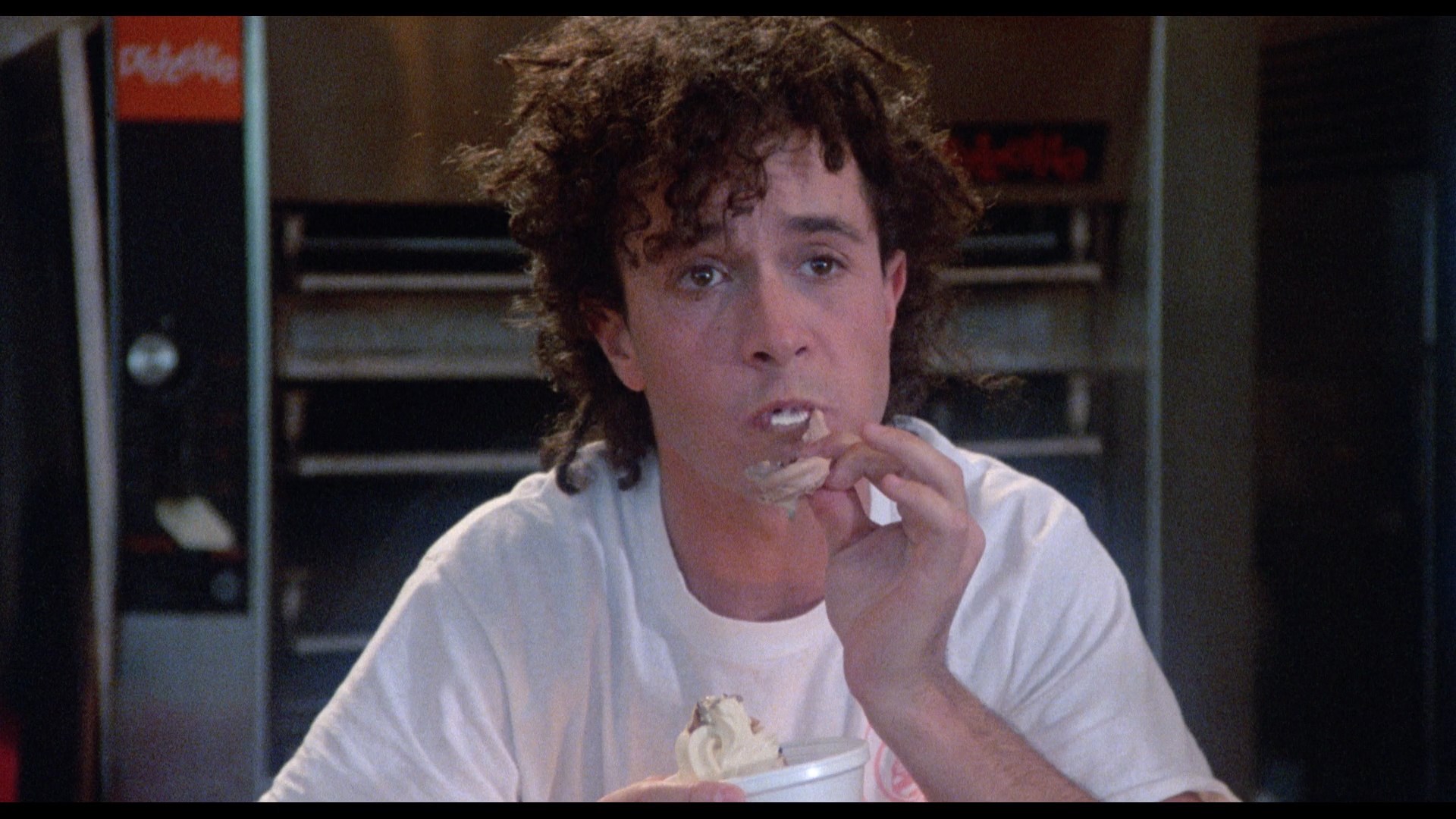 Revenge barely made a blip on the big screen but has built up a minor cult following over the years thanks to the miracle of home video. Not a sequel to anything, it was dreamed up as a teen spin on the recent fad for all things Phantom of the Opera, from the smash Andrew Lloyd Webber musical to the stylish, bloody 1989 version starring Robert Englund. As you can probably guess, this one places its tragic, disfigured phantom in the middle of a SoCal shopping mall instead of an opera house, here pining after a retail employee. Today the main curiosity value is its insane cast including Morgan Fairchild in full bitchy fashion goddess mode, Dawn of the Dead's Ken Foree in a glorified cameo as a security guard, a pre-fame Pauly Shore as a prankster ice cream scooper, and future Melrose Place and Silk Stalking star Rob Estes... all rubbing shoulders in the same horror movie.

Midwood Mall is poised to be the hottest shopping spot in town thanks to the efforts of crooked property owner Harv Posner (Goldsmith) who's in cahoots with Mayor Karen Wilton (Fairchild). With the big 4th of July grand opening coming up fast, something sinister is lurking deep within the building and obsessed with one of the employees, Melody (Whitman), who lost her 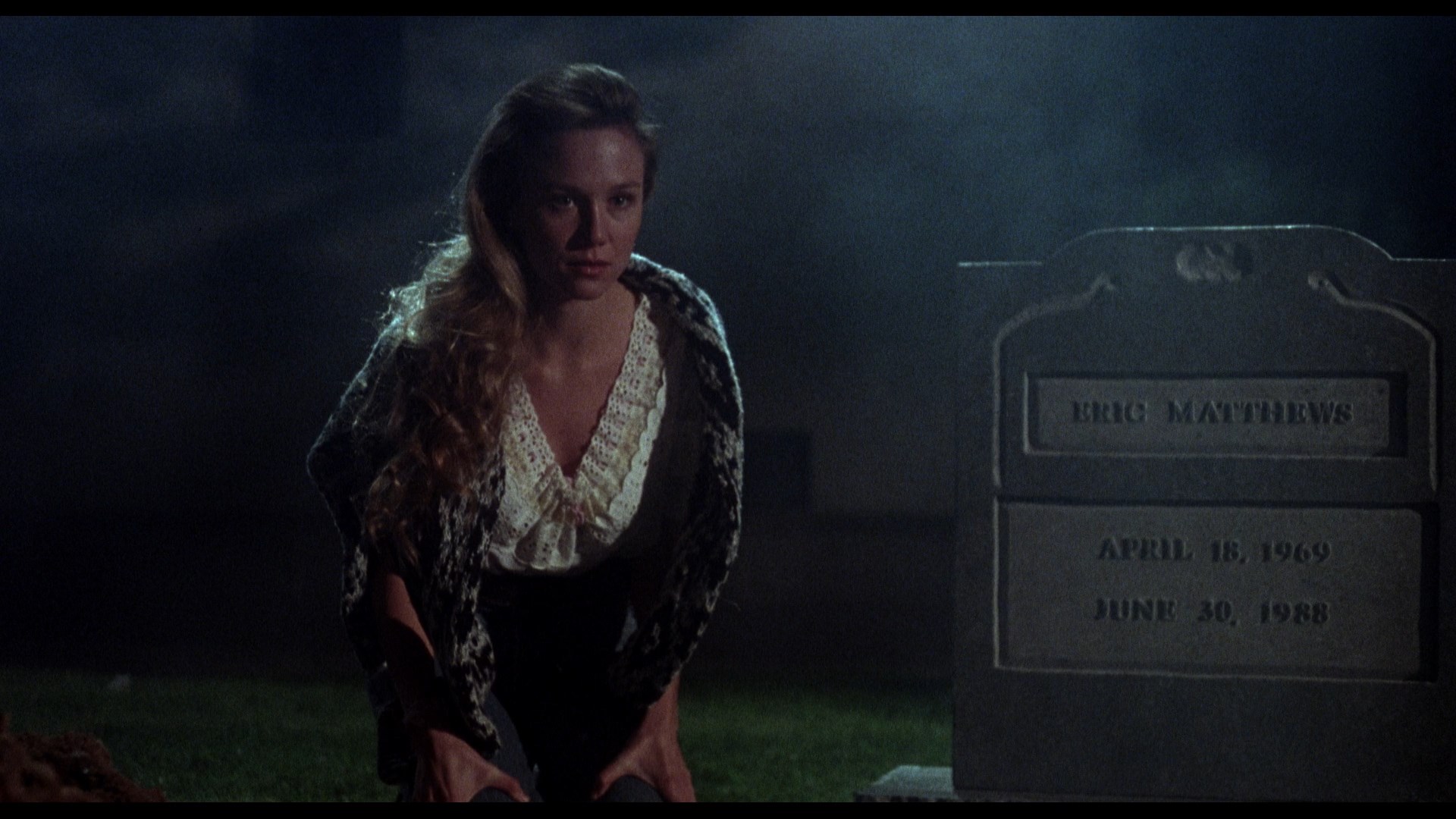 boyfriend, Eric (Rydall), in a suspicious fire one year ago. Reporter Peter Baldwin (Estes) is on hand to cover the preparations, which soon turn bloody when a security guard gets off late at night. Using 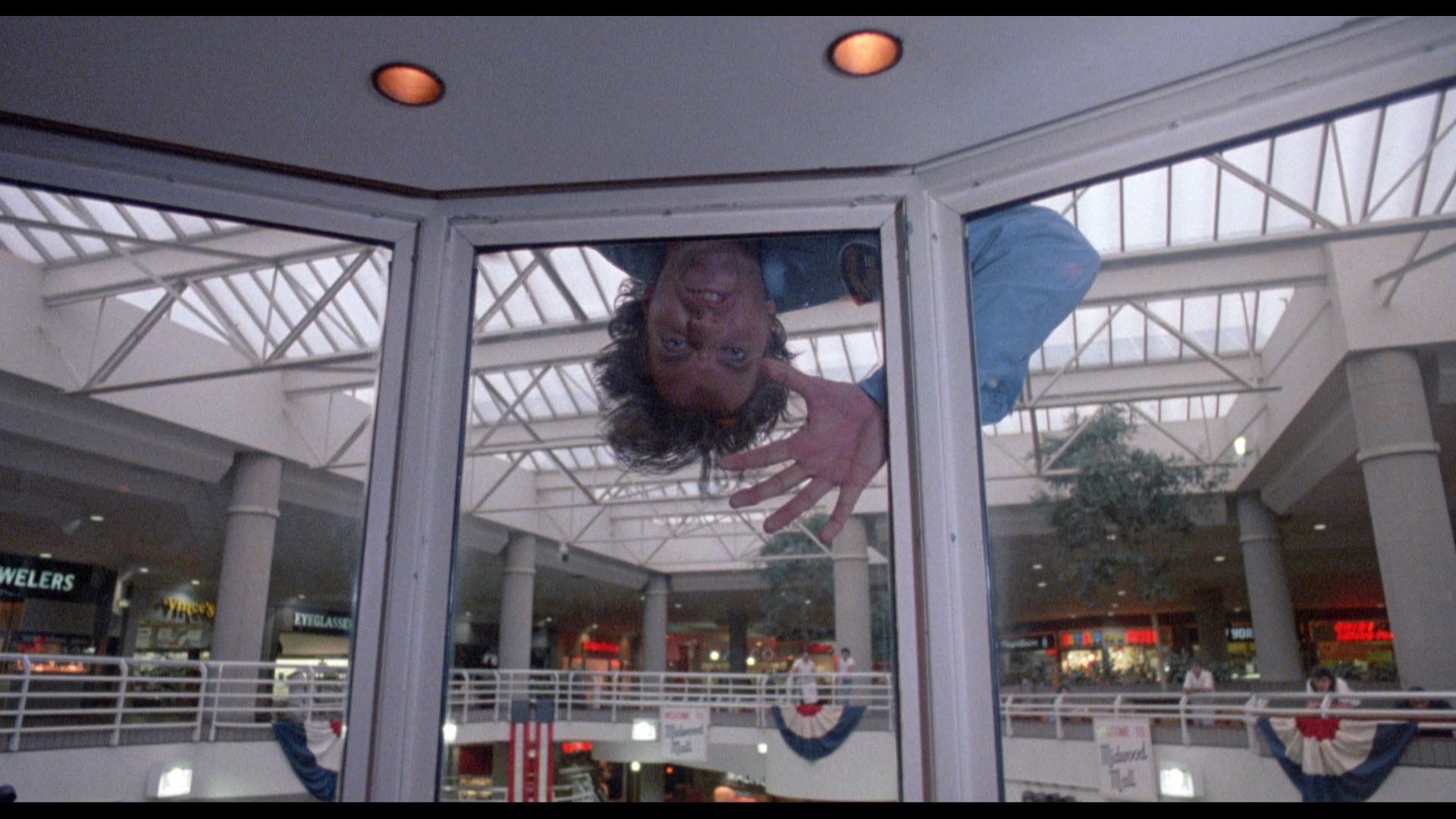 everything from a crossbow to a snake, the masked man -- who quickly turns out to be Eric, of course -- seems hellbent on protecting Melody, who's trying to move on with her life thanks to the help of coworker and best friend Susie (Sissons). Meanwhile Harv and his minions, not to mention his grotesque spoiled son Justin (Fridley), seem to be tied to something about the mall's history involving with the escalating bloodbath.

As a slice of late '80s mall culture, this one's virtually impossible to top with tons of great coverage of the new unrecognizable Sherman Oaks Galleria, which had already become a cinematic fixture thanks to films like Fast Times at Ridgemont High, Commando, and of course, Chopping Mall. Between the cast and the occasionally nasty kill scenes, there's a lot of fun to be had if you're accustomed to that odd muted vibe common in horror films around this time. However, as the bonus features on the 2021 Blu-ray from Arrow Video explain in ample detail, the original concept was severely overhauled with diminishing results during the pre-production process, and director Richard Friedman (Doom Asylum, Scared Stiff) keeps 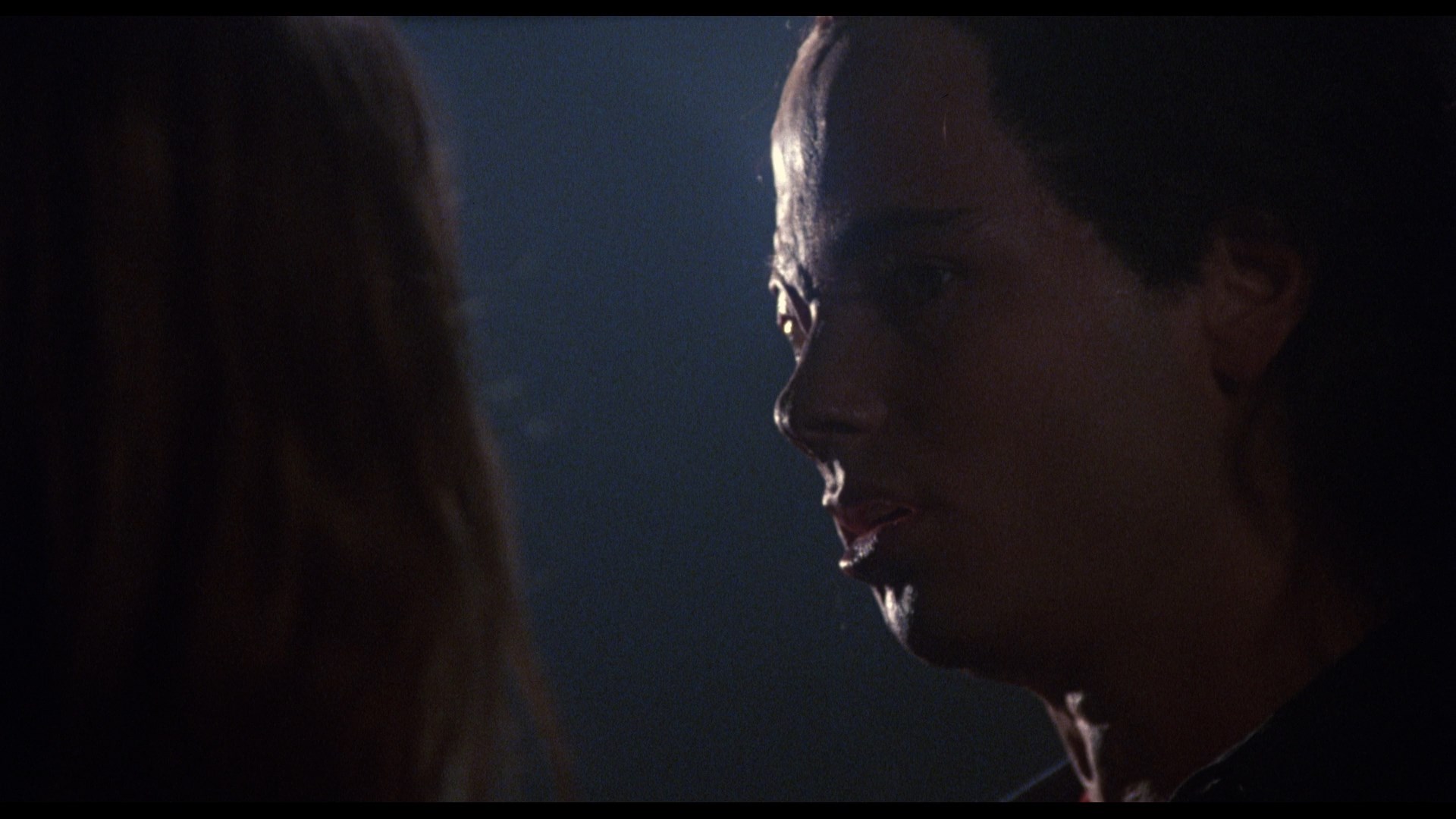 things moving along without much muss, fuss, or tension along the way. The result feels like an unusually violent cable TV movie, with a 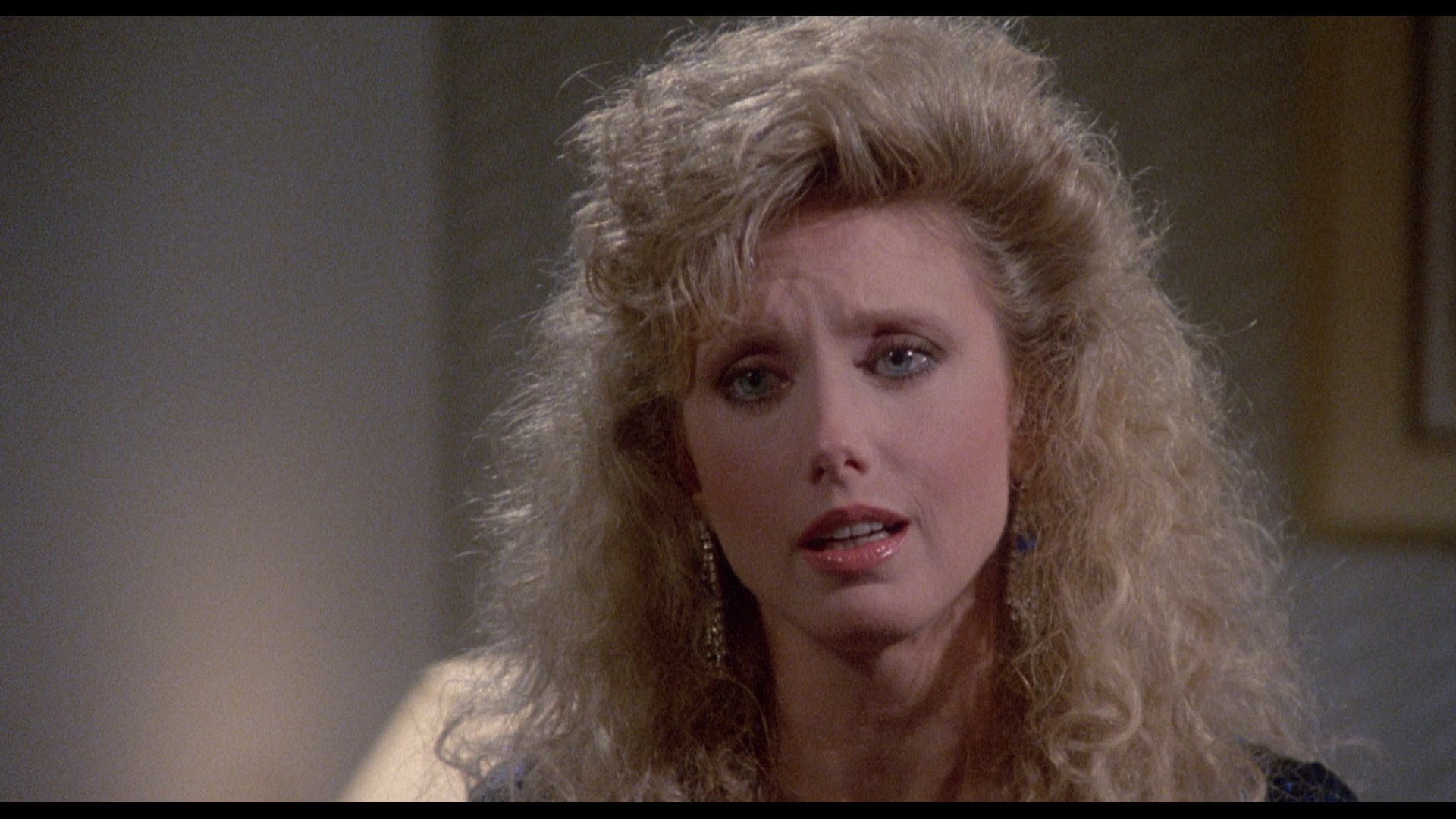 little out-of-left-field nudity thrown in just because. The teen romance aspect is definitely in keeping with the lovelorn approach to Gaston Leroux's more monstrous original phantom in the past few decades, with a far more time spent on Rydall's normal face via flashbacks than most of his Eric-connected peers usually enjoy. Plus you get a phantom running around in a baseball cap attacking someone with an escalator, so that's definitely one for the movie history books.

Phantom of the Mall was one of the more high-profile films from the short theatrical period for TV-heavy Fries Entertainment, who also gave you The Siege of Firebase Gloria, Troop Beverly Hills, Steel and Lace, and Night Angel before folding the following year. It's had a very spotty home video history ever since its 1990 VHS and laserdisc incarnations from Fries and Image Entertainment. A very mediocre DVD popped up briefly from Echo Bridge Entertainment in 2005, taken from a dated tape master and impressing nobody. The Arrow Video overhaul is far more satisfying, decked out as a two-disc limited edition featuring no less than three(!) cuts of the film and a wealth of new extras. The packaging just notes "original film elements" as the source of the transfer, but this is a significant and very welcome upgrade over the old DVD with far more coherent dark scenes, natural film grain, and very nice color saturation with that unavoidable '89 emphasis on salmon and turquoise. The DTS-HD MA 2.0 mono audio (with optional English subtitles) 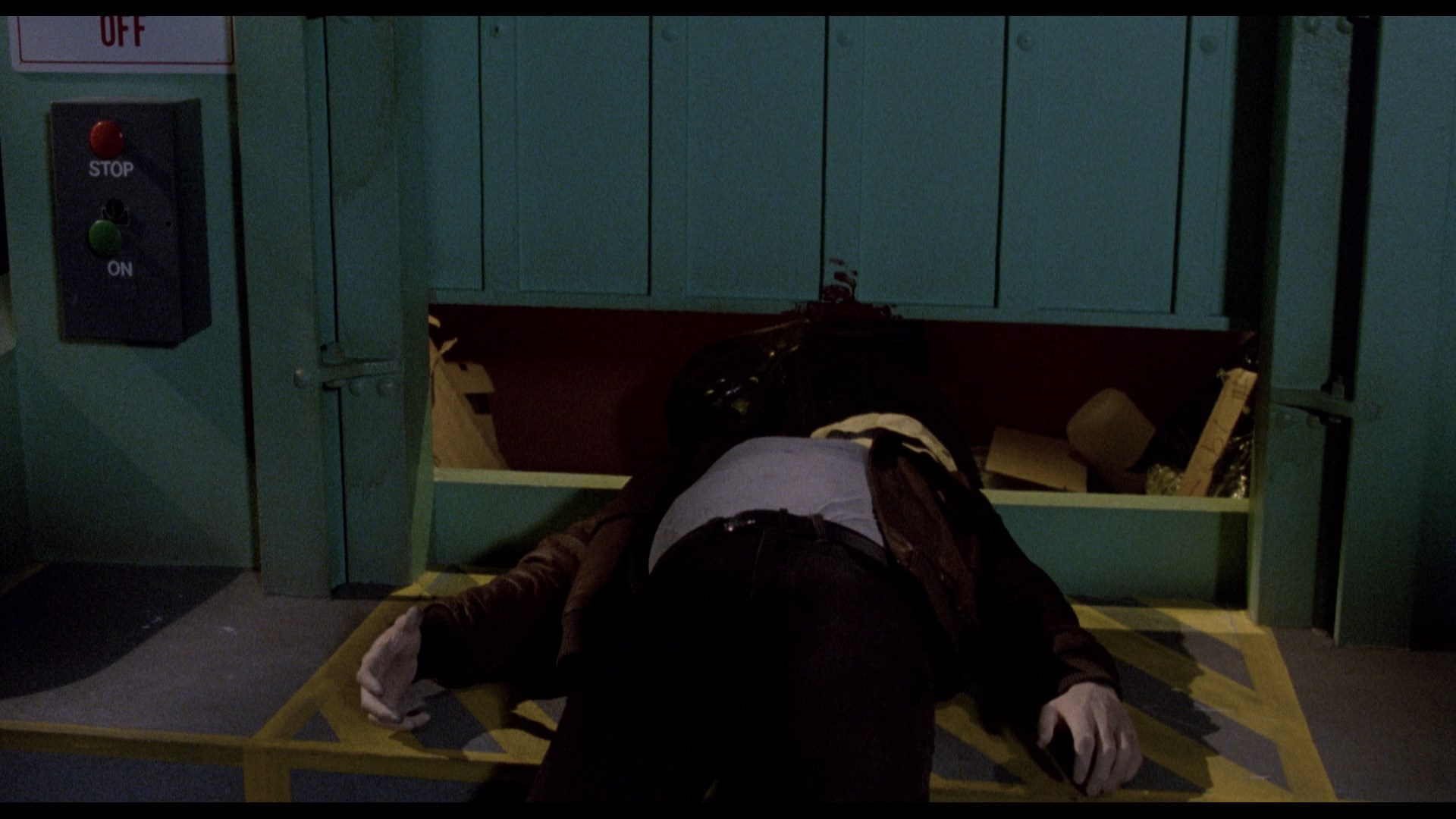 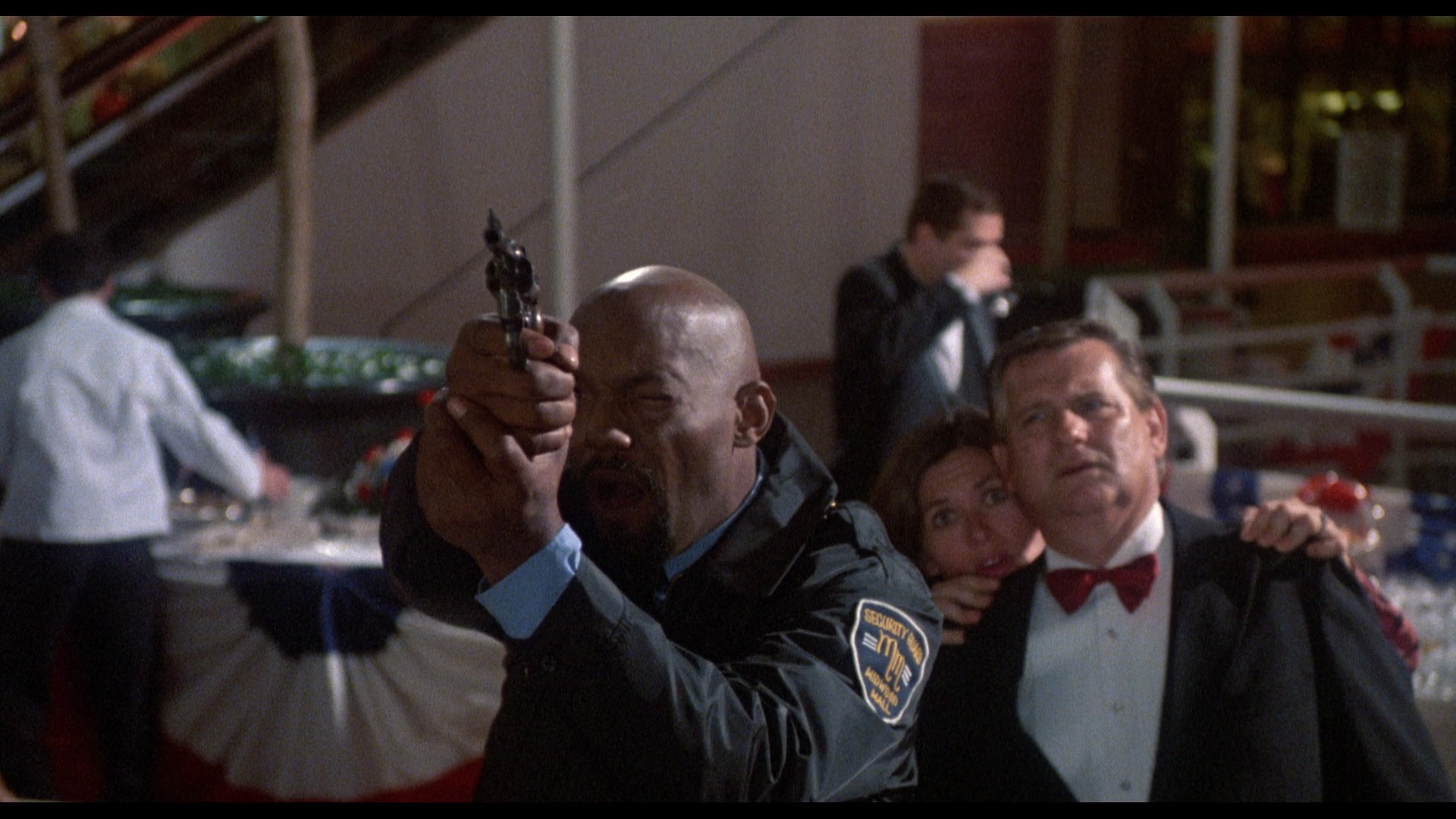 given the source, which is a pretty standard, flat mix for a film that should've at least gone Ultra Stereo by this point. Disc one features the theatrical cut in nice quality all the way through, plus three(!!) audio commentaries: Friedman with Red Shirt Pictures' Michael Felsher; Arrow's Ewan Cant and Made for TV Mayhem's Amanda Reyes; and a Felsher-hosted track cut together from interviews with composer Stacy Widelitz and associate producer Robert J. Koster, which wraps up around the 82-minute mark. That last track isn't listed on any of the advertised extras, so it may have been a last-minute addition. All three are definitely worth a listen, with the personnel from the film charting its bumpy road to completion with stories about the casting, the various locations (with two more malls subbing in a bit for the Galleria in some scenes), and the state of Fries at the time and its founder, TV maven Charles Fries (who passed away a few months before this release). The Cant-Reyes track is obviously from more of a fun analytical and fan perspective as they juggle an overview of the film's history (including its major budget cuts), the joys of mall culture here, and the film's promotional and home video history. "Shop 'Til You Drop!: The Making of Phantom of the Mall" (42m22s) is a particularly strong video piece bringing together Friedman, Rydall, screenwriters Scott Schneid and Tony Michelman, actor Gregory Scott Cummins, filmmaker Tony Kayden, and special make-up effects creator Matthew Mungle. It's all very candid about the major script drama and the financial constraints among other things, but it's also quite joyous and funny at times with a good mixture of stories from the set. "The Vandals Go the Mall" (12m56s) features Joe Escalante of The Vandals chatting about the creation of the film's memorable theme song, as well as the history of the Orange County punk band to that point. A batch of six scenes from the film's TV 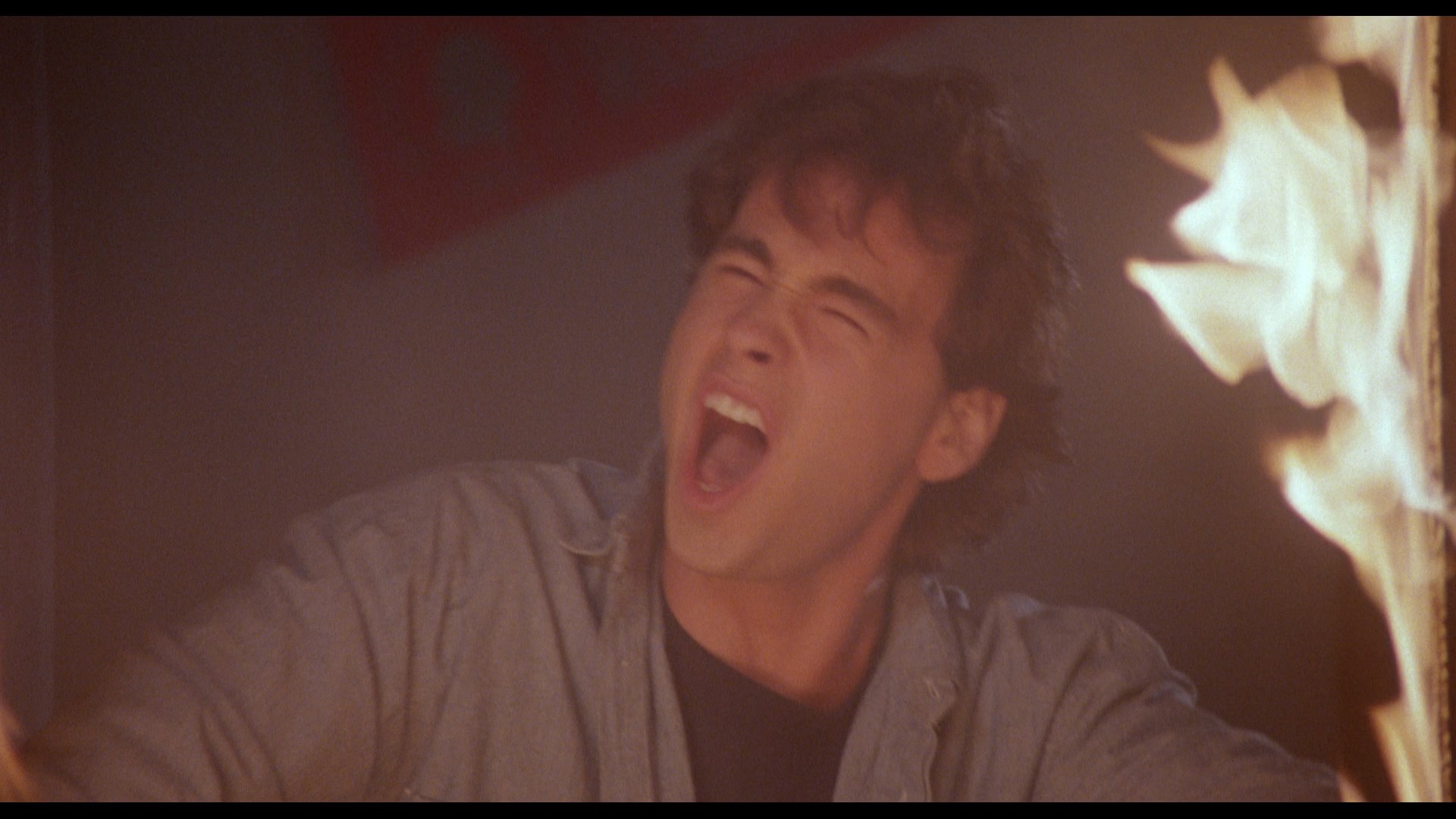 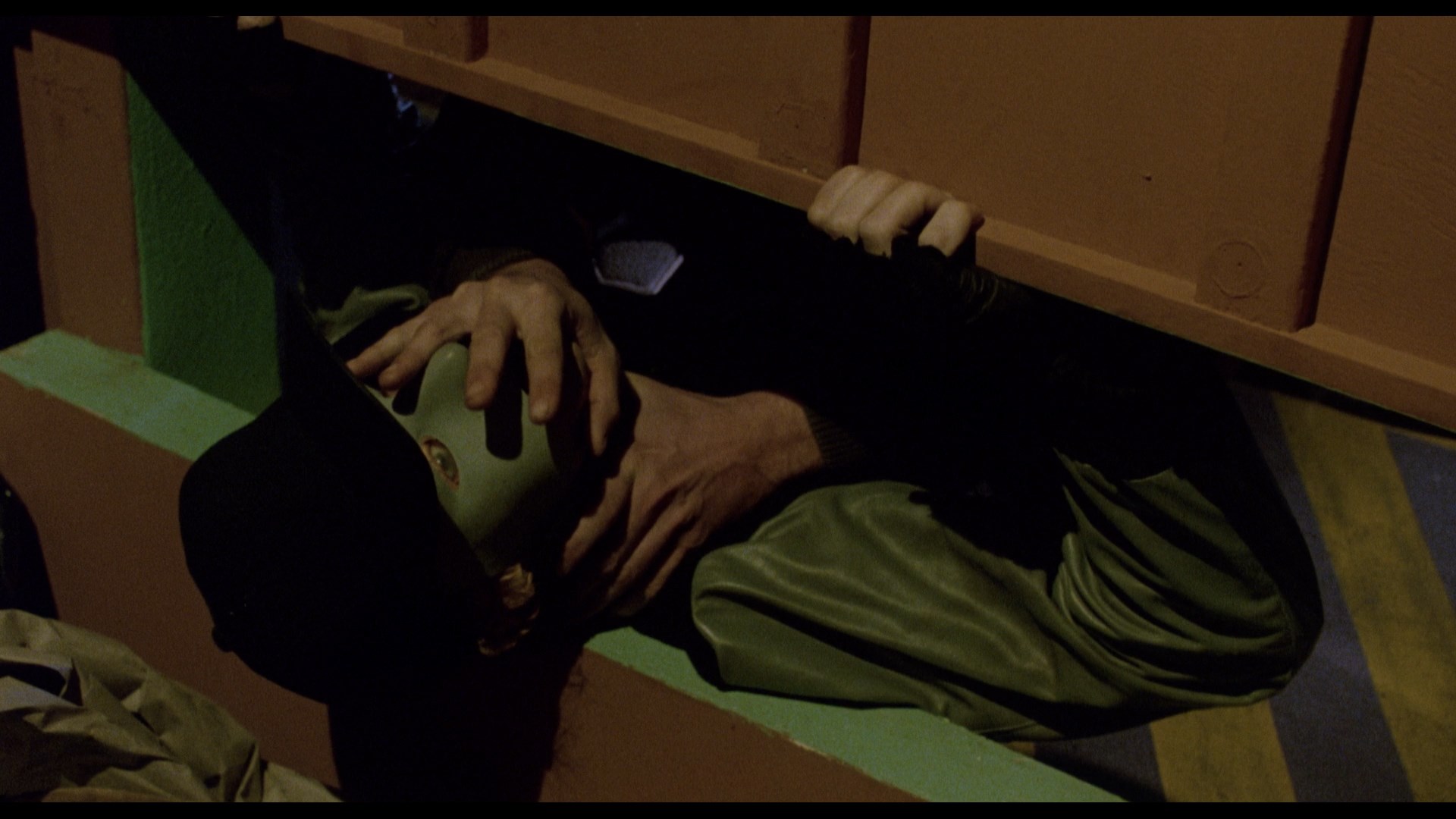 Time," "Lock Picking," and "Air Duct." Finally disc one wraps up with the domestic and international trailers (both from decent film scans) and a gallery of production photos, stills, and marketing material.

But that's not all! Disc two features the TV version (88m36s), which loses all the gore, nudity, and profanity while adding those extra bits seen on disc one. The quality here is SD of course but fine for what it is from what appears to be a broadcast master rather than VHS. Taking a page from Arrow's previous releases of Blood Rage and The Prey (both of which were also Cant labors of love), there's also an integral cut (96m18s) editing together all of the possible footage into one turbo version. The TV footage is matted to 1.85:1 here so it all plays consistently, and while this obviously shouldn't be the first choice for new viewers, it's a great gift for fans who want to see how it all plays together. The release also comes with a 60-page illustrated book with essays by Reyes and Daniel Budnik, a fold-out poster of the new cover art by Justin Osbourn, and six postcard-sized lobby card reproductions.