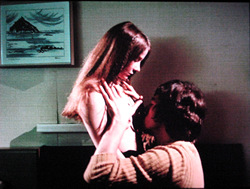 In a bustling London on the cusp between hippie fallout and 70s decadence, young new girl Suzy (Stride) finds a pad to crash and makes friends with auburn-haired vixen Fiona (Singleton), who enjoys long, revealing bathtub soaks when she isnt knocking boots with the scruffy lead singer of a psych-rock group called Forever More (and sometimes with his band mates as well). However, this freewheeling lifestyle takes a dark turn when Suzy hooks up with a string of ill-advised bedmates including the bands lecherous older manager (Prime Suspects Wynne), a grabby, big-breasted lesbian in a hotel room, and ill-fated loose cannon Pogo (Daubigny). This being the early 70s, it all ends in utter tragedy. 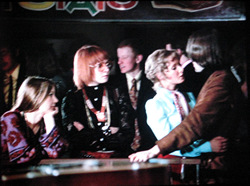 A peculiar and always entertaining mixture of exploitation (including more female nudity than average for the time), post-Woodstock artiness, and moral hand-wringing, Permissive is obviously a product of the same twelve months that produced the likes of Groupie Girl, Model Shop and The People Next Door, all of which utilized similar rock music to depict the rapidly-changing youth culture that seemed to be speeding in an unknown, possibly terrifying direction. Here the main attraction is the performance footage of Forever More and Titus Groan, intercut with great shots of Suzy wandering the streets of London during its pop culture zenith. Its even more interesting as part of the truly bizarre career of director Lindsay Shonteff, who directed a pair of interesting horrors for Richard Gordon in the 60s (Devil Doll and Curse of the Voodoo) before swerving into multiple genres including the ridiculous fantasy The Million Eyes of Sumuru and the trashy, T&A Ripper outing, Night after Night after Night. He certainly knew how to construct a marketable piece of drive-in hokum, and in this case he slips in enough sex and turmoil to keep the kids happy (along with a surprise appearance by Playboy models/Hammer starlets Madeleine and Mary Collinson as two minor groupies). The strange combination of leering cheesecake imagery and downbeat scolding was hardly new at the time, even affecting most of the sex comedies of the period like Whats Good for the Goose and on into the 70s with such unlikely variations as Dracula A.D. 1972. 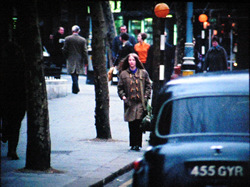 This completely forgotten time capsule makes perfect sense as an entry in the British Film Institutes laudable Flipside series, dedicated to reviving forgotten filmic arcane for new generations. Context is everything here as a film lost in the shuffle becomes much more interest in retrospect, with the raw performance footage jolting things to life every time the story threatens to collapse into pure formula. The transfer is extremely impressive and razor sharp, presented full frame (the correct aspect ratio; dont even bother trying to crop it off on a widescreen TV) with robust hues and only one unavoidable bit of water damage to the negative visible during one early sequence in a nightclub hallway. The optional English subtitles come in handy as well during a few mumbled dialogue exchanges.

The major extra here is Bread, a 1970 short feature (68 minutes) primarily dedicated to performance footage of music festival participants Juicy Lucy and Crazy Mabel, loosely held together by a negligible story about a bunch of teens who split their aspirations between throwing a music bash after going to the Isle of Wight and making stag films to earn some, yes, bread. The musics great, and many viewers will probably hit the fast forward button a few times to skip over some of the inane connecting tissue to keep the energy level up throughout the film. This transfer has been taken from the only surviving good film elements (most from the incomplete negative) with some additional outtakes also included as a separate extra. The later 1973 short film included here, Ave You Got a Male Assistant Please Miss?, is basically a rock-scored educational film about how girls can go about preventing pregnancy before they have to resort to abortion (which leads to a memorable closing piece of onscreen text). The title refers to a suitors discomfort buying condoms at a pharmacy, a sequence that will no doubt seem a lot funnier to anyone familiar with Amazon Women on the Moon. Also included are the original Permissive trailer and the usual thick, informative liner notes booklet including informational overviews of the two features and short by I.Q. Hunter plus comments by members of contemporary musicians Comus and Lee Dorrian. All told, its a laudable, rewarding, and fascinating treat for anyone with a love of 70s ephemera.