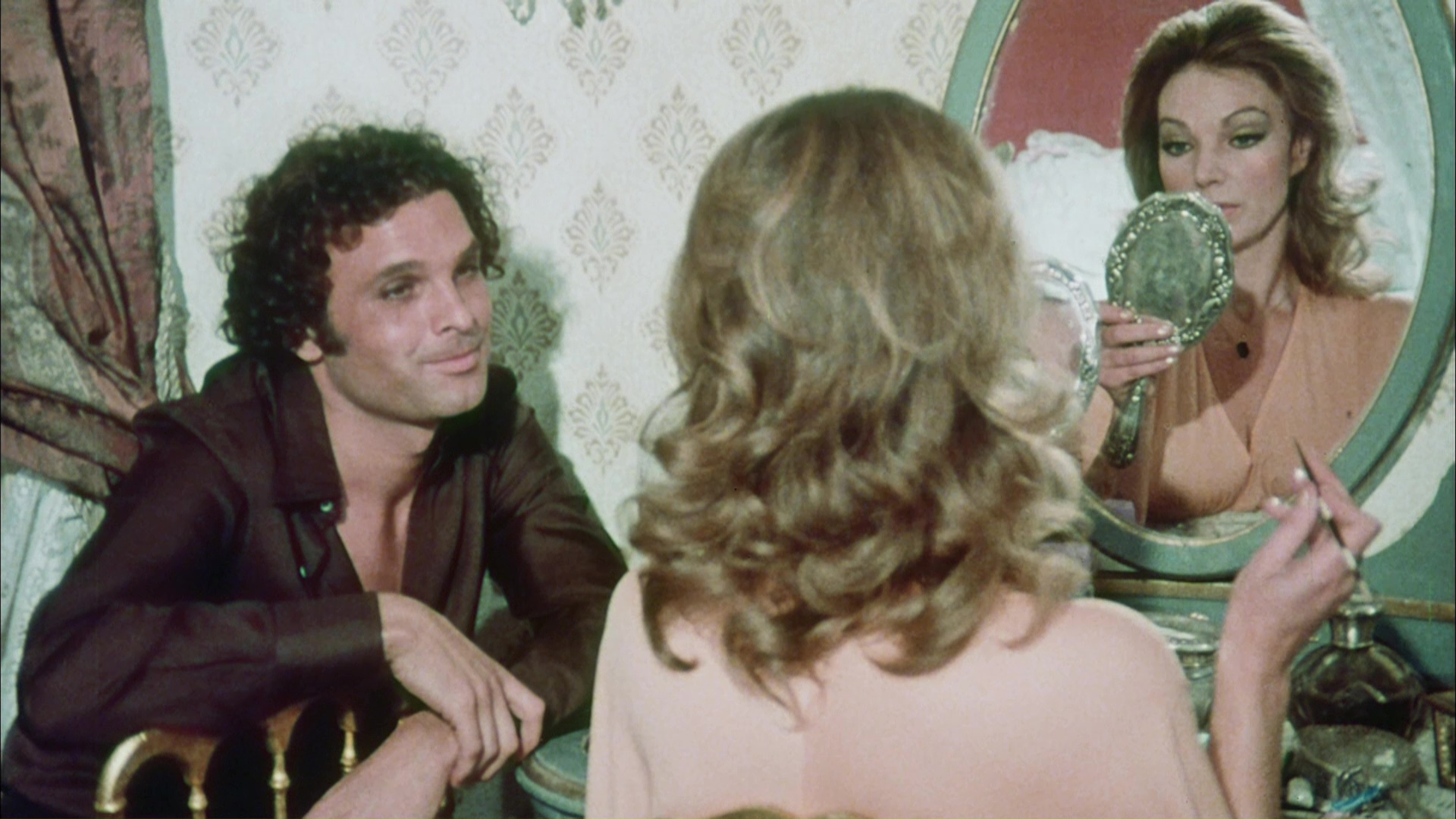 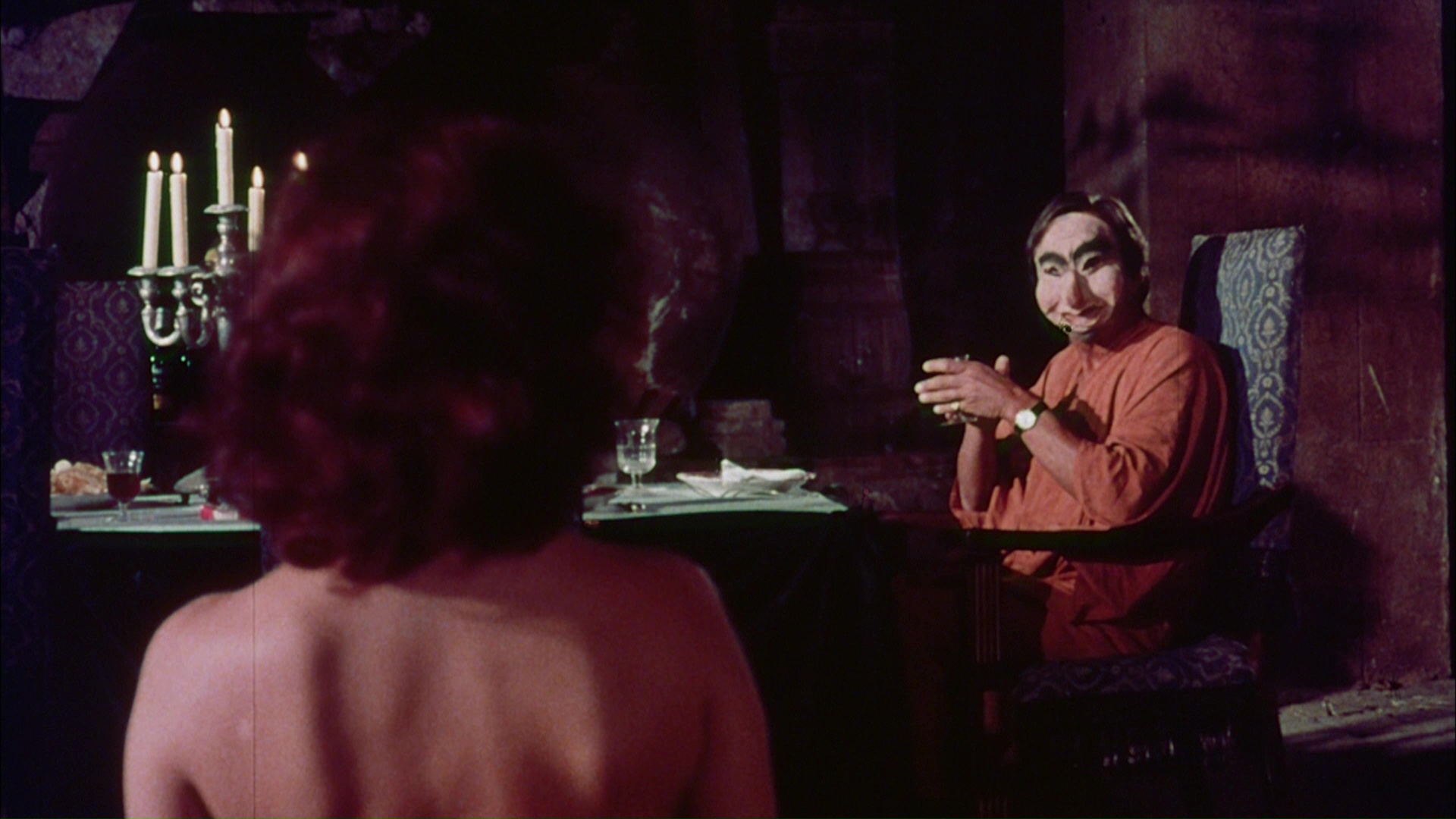 When they weren't busy teaming up for '70s Spanish monster movies like Werewolf Shadow, Vengeance of the Zombies, and Dr. Jekyll and the Werewolf, actor Paul Naschy and prolific director León Klimovsky turned out this peculiar and strangely haunting horror/sci-fi hybrid inspired in equal parts by I Am Legend and The Day of the Triffids. Naschy actually takes on more of a supporting role here as Borne, a macho hunter type who joins a bunch of debauched upper class businessmen and their female companions for a weekend of fun and games in the countryside. That includes gathering in the basement to put on creepy pig masks and parade the women around in see-through gowns for some kind of kinky swingers' ritual, but they're cut short by an earth-rattling explosion above that sends a blind pigeon crashing to the floor. The maid shows up blind, too, with completely white eyes, and soon they realize that some kind of apocalyptic attack above ground has rendered most of the population dead or completely sightless. As the party hounds try to gather munitions, the blind locals become bent on irrational vengeance and start to gather outside the house as those inside also find their sanity beginning to break.

Far from your typical horror exploitation film, The People Who Own the Dark feels much more like a creepy art film than the usual Klimovsky fare. Part of that may be due to the presence of cowriter Vicente Aranda, the director/screenwriter of The Blood Spattered Bride and Lovers, whose penchant for dark surrealism is well in evidence here. The first third of the film feels like a dark 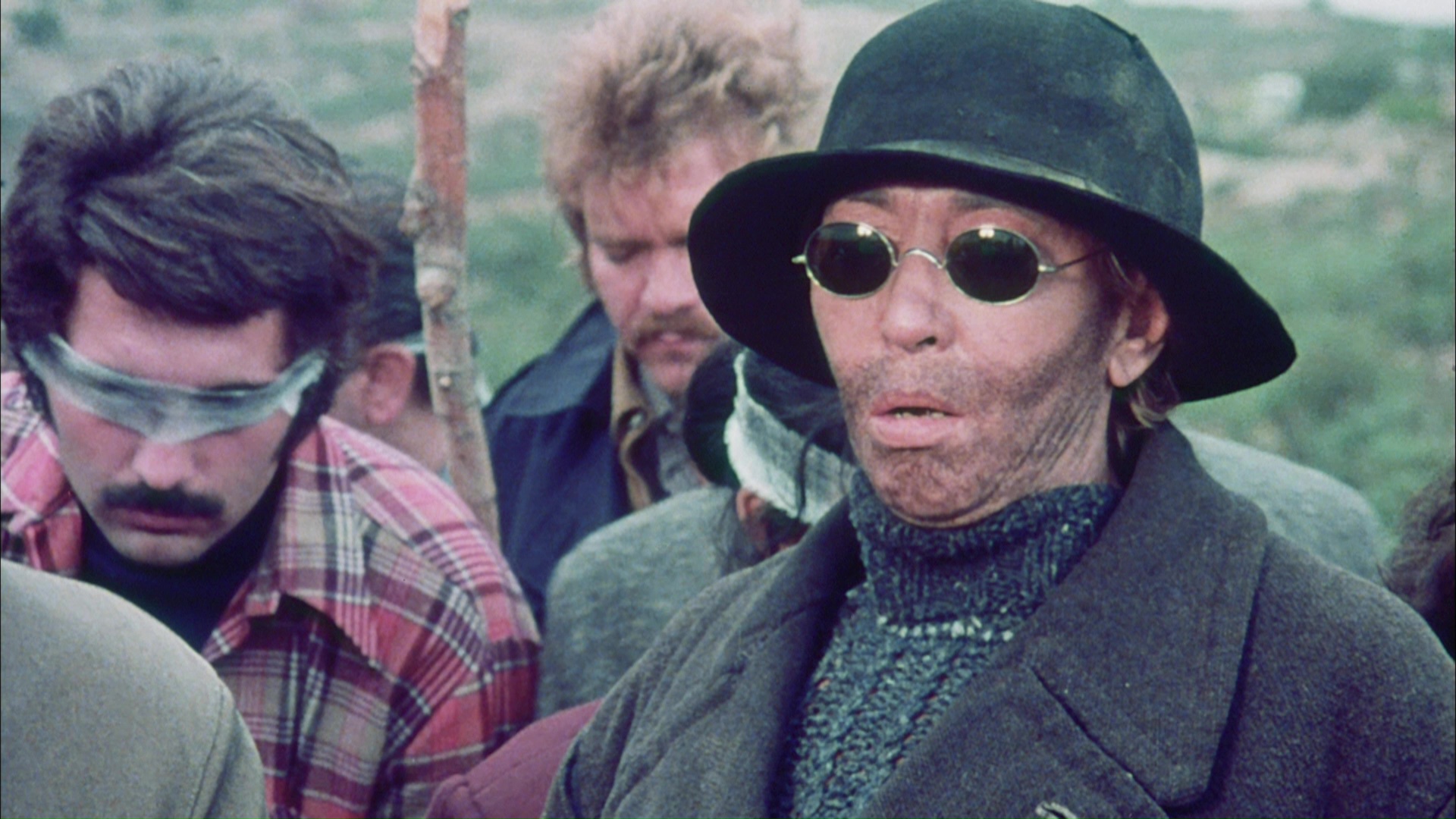 comedy in the vein of Luis Buñuel or Marco Ferreri (think The Exterminating Angel or La Grande Bouffe reconfigured as a drive-in movie), 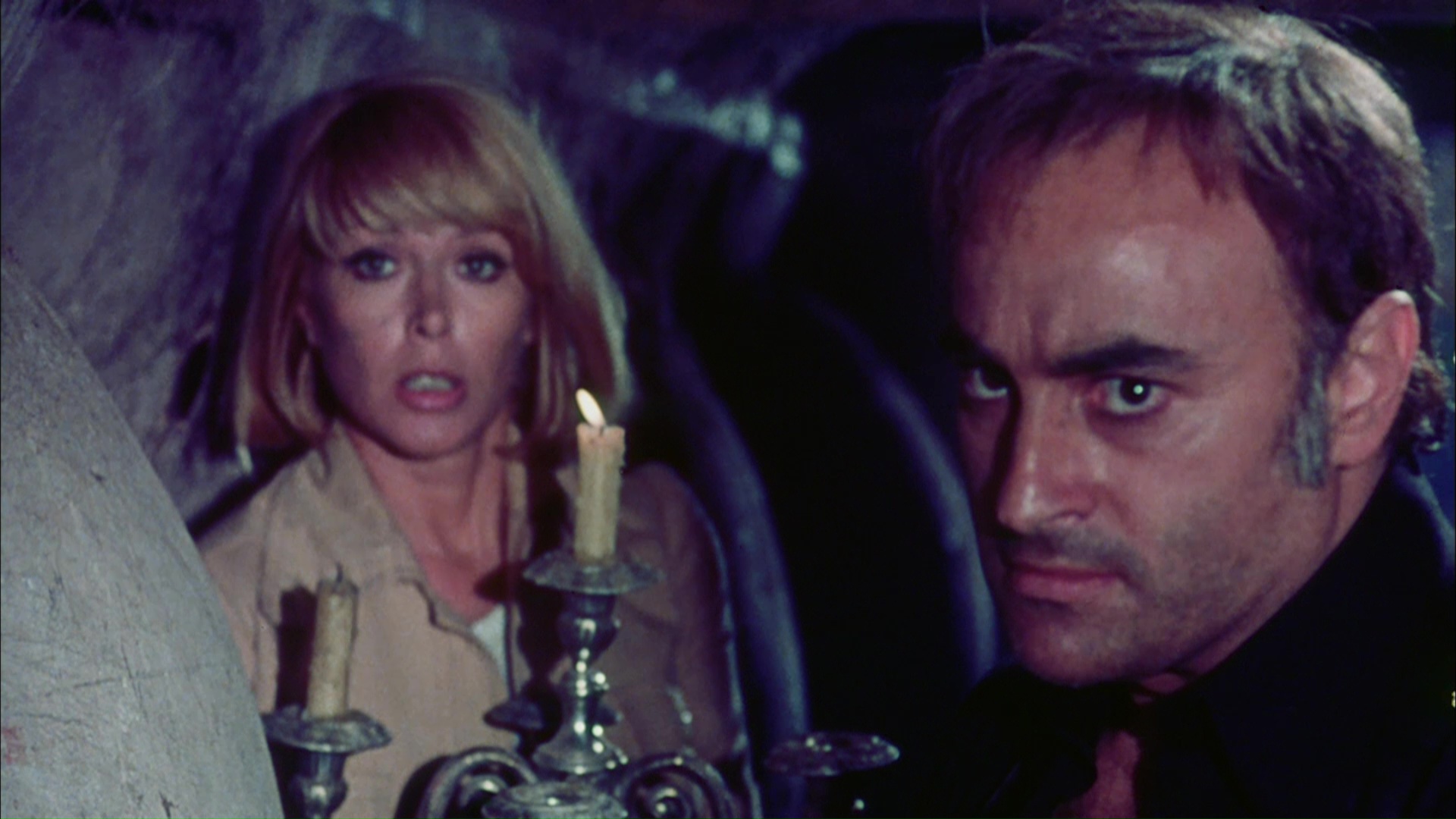 but the story then takes a number of increasingly bizarre and irrational turns: one unhinged survivor taking to crawling around unclothed and lurking in the corner in his pig mask (a scene worthy of Twin Peaks), the spooky gatherings of the titular people outside the house at night, and especially the jolting final five minutes, a truly grim turn of events strangely similar to the finale of the later Japanese horror/gangster film Gonin. It's all a little too disjointed and uneven to call an unqualified success, but there's more than enough creepiness here to recommend this for anyone looking for a potential cult item off the beaten path.

Barely released with a pretty nifty poster by Cinematic in America, this was very briefly made available in dubbed form on VHS from Sun Video back in the '80s. That same artwork adorns the cover of Code Red's DVD from 2012 (sold directly online), apparently the first available anywhere in the world. This one was never even mentioned for the round of Naschy titles remastered several years ago for BCI, so one has to wonder whether the original negative's even around anymore. The first option is what's referred to on the packaging as an "abused" grindhouse print, which means it's pretty heavily damaged and features loads of splices, lines, and random debris. The opening minutes fare the worst (the title card barely appears on screen), but after that it gets smoother with the second half being downright acceptable. If you could make it through Death Proof, you can handle this, too. That damage of course causes a few seconds to fall by the wayside here and there, bringing the running time up to a little over 78 minutes. 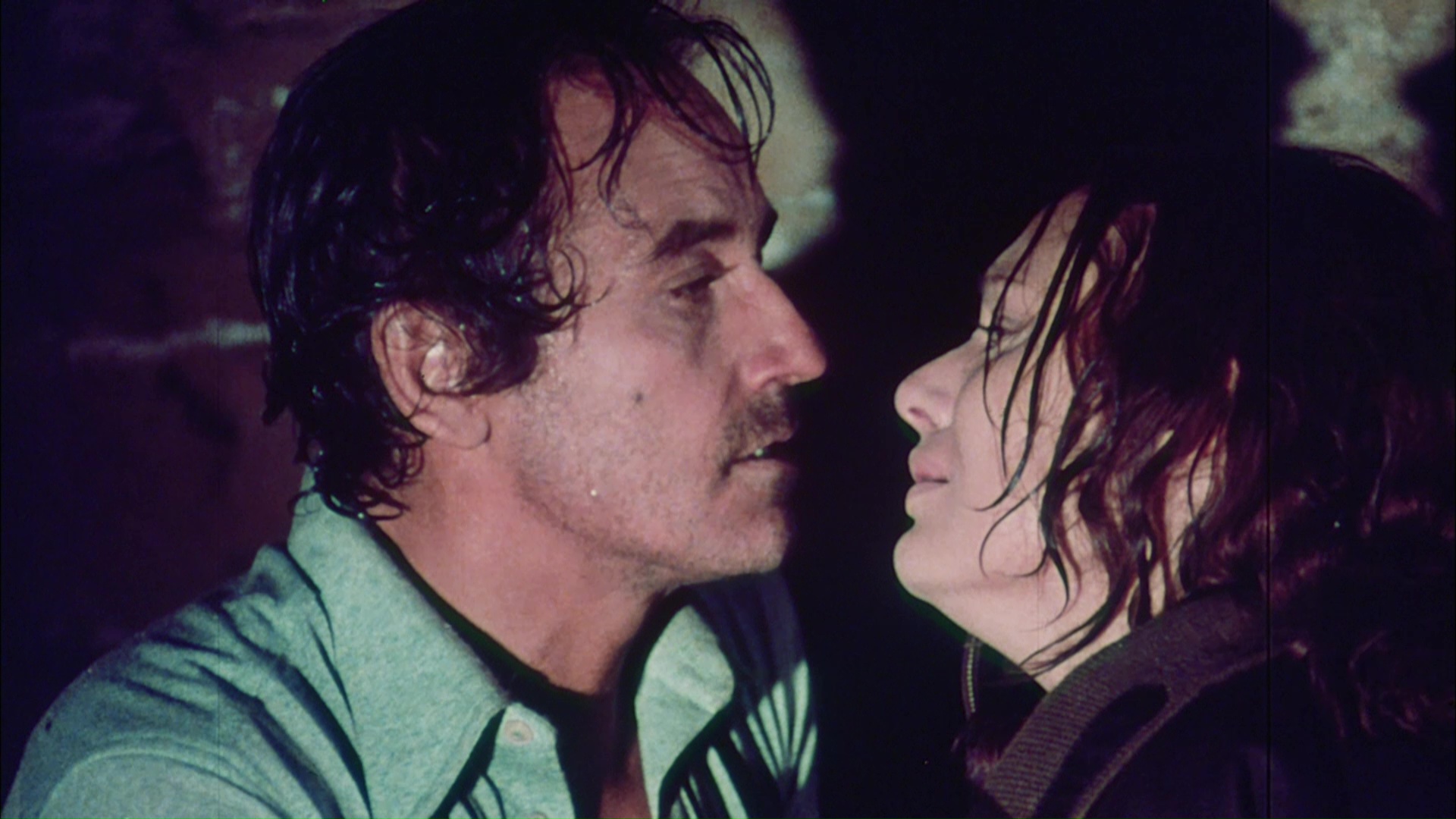 The English-language version used for the VHS release clocks in about three minutes longer, so that edition is presented here as well (as the "portable grindhouse" version) in all its 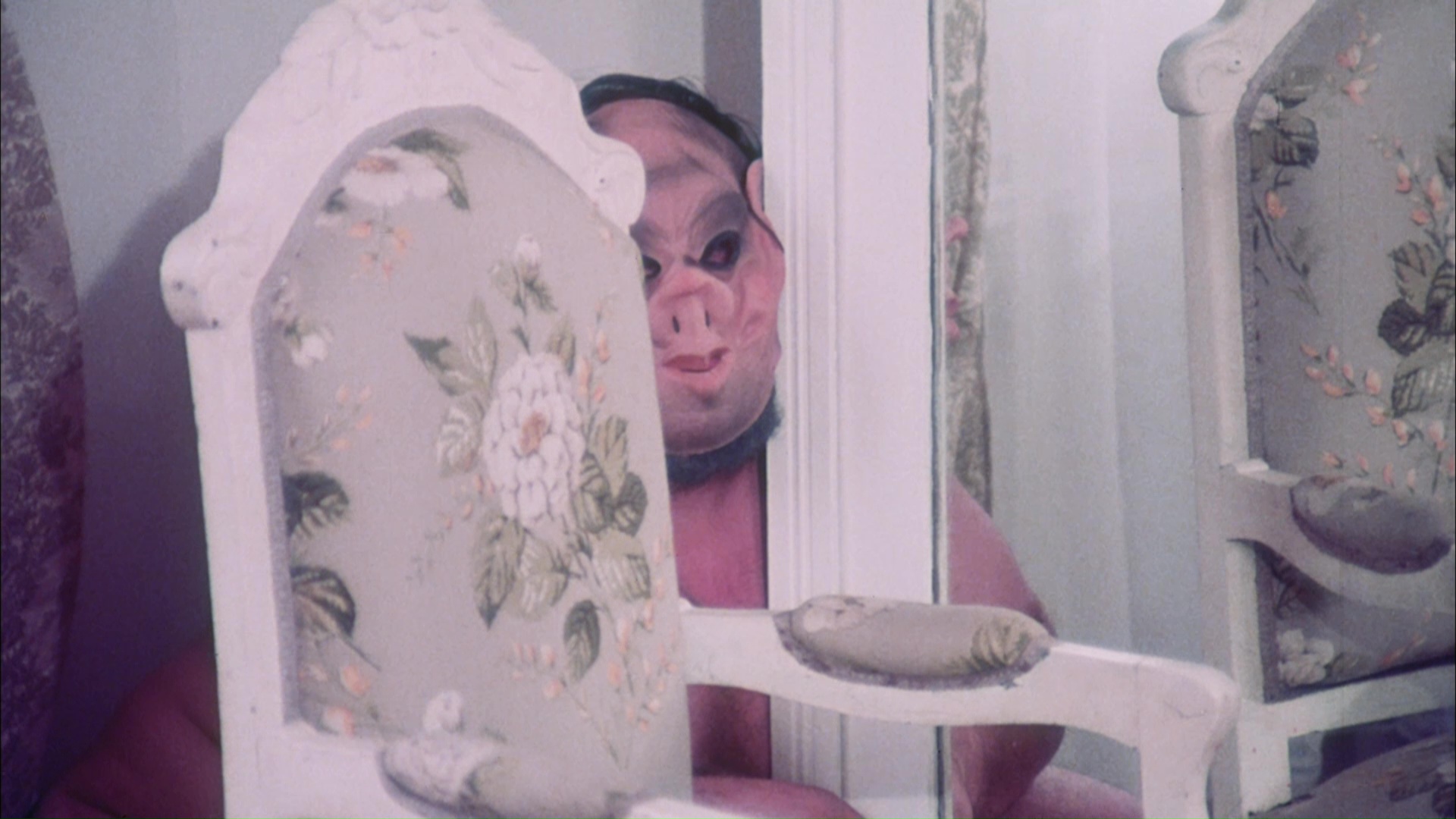 analog '80s splendor. Flat letterboxed at about 1.66:1 for most of the running time with a few open matte shots here and there, it looks exactly like a lower-tier tape title from the period; don't get your hopes too high, but if you want to see the film without any damage-related problems, this "retro" option may be preferable. Some sources list a Spanish running time of up to 94 minutes; if anyone's actually seen a version running that long, please write in and report. In its current form, nothing really seems to be missing-- so who knows? The US theatrical trailer is also included (from what appears to be a VHS source) along with the usual Code Red bonus trailers, with Family Honor playing before the feature as usual. The back of the DVD sleeve carries over the US poster's baffling claim to the film being presented by Sean S. Cunningham (Last House on the Left), while the synopsis itself hilariously refutes it.

Nearly four years later, Code Red revisited the title for a late 2015 Blu-ray release sold directly though their store. Surprisingly (in the best possible way), they've derived their HD transfer from an entirely different print running 83 minutes, restoring many of the small bits that were damaged before. There's still a sliver of missing frames before the end credits, but it's a massive upgrade all around with far less damage and a good combination of the best aspects of both versions on the DVD edition. There's still some damage, not surprisingly (including a thin intermittent yellow scratch in the first couple of reels), but the uptick is very substantial and should make Spanish horror fans happy. The image is also a bit brighter with more detail visible in the darker scenes, which is nice since that's about 80% of the second half of the movie. The brief opening credits are in substantially rougher condition, so don't panic when the film first starts up. The DTS-HD MA mono audio sounds fine given the nature and age of the source, and the theatrical trailer is also included in its usual lo-res glory.