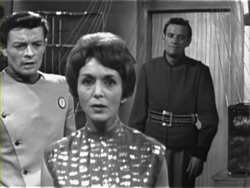 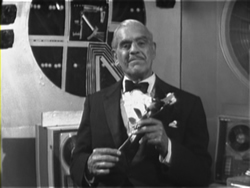 hosting the chilling series Thriller, that wasn't his only hosting gig around that time. In England he also introduced episodes of Out of This World, a one-year sci-fi series in 1962 featuring adaptations of works by noted genre writers like Isaac Asimov and John Wyndham. The success of this endeavor led its personnel to move on to another anthology series, Out of the Unknown, which proved to have a much longer life.

Unfortunately all of the ABC series was lost in the usual process of tape purging that claimed far too many gems of that era, apart from one episode. Adapted from an Asimov short story, "Little Lost Robot" stars Maxine Audley (who had recently appeared in Michael Powell's notorious Peeping Tom) as Susan Calvin, a "robo-psychologist" in a futuristic time when artificial intelligence is on the rise. A recurring character in Asimov's fiction, she's brought in to help when a scientist working on a hyperspace project on an asteroid tells one robot to "get lost"-- which it takes literally by losing itself among a room filled with a fleet of other identical robots. However, this particular model has been created with a different directive that could allow harm to befall human beings, so the hunt is on to smoke it out before the rest of the world finds out about its existence.

An engrossing little drama with parallels to Asimov's more famous novels involving the same themes, this is a commendable production with a good turn by Audley at its center. The mystery gimmick is also a fun hook to keep the action moving for the hour, and of course, it's always great to see Karloff in any capacity at all. 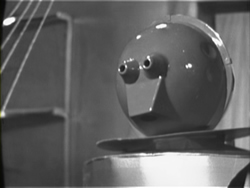 The BFI DVD release marks the first official release of this great little chapter in TV sci-fi history, culled from a filmed recording of the original broadcast. The quality is fine considering the history of the source, and there's also an interesting alternate "VidFIRE" presentation correcting it back to the original frame rate as seen when it first aired. (It looks similar to those Tru-Motion functions you see as a default on many TVs, which actually works in this case.) The main extra for the episode is an audio commentary with series producer Leonard White and Mark Wood, an expert on series creator Irene Shubik, moderated by actor Toby Hadoke. There's a lot of ground to cover here as they go over the entire history of the show in less than an hour, so don't expect much dead air here.

Also included are surviving audio recordings of two additional episodes, "Cold Equations" (written by the prolific Clive Exton and featuring the great team of Jane Asher and Peter Wyngarde) and Philip K. Dick's "Imposter" (adapted into an American feature film much, much later), which is incomplete and in rough condition but still a valuable asset. A pdf of the script for the series' pilot episode, Wyndham's "Dumb Martian" (which was refitted for Armchair Theatre at the last minute) is also present. The obligatory illustrated booklet features essays by Oliver Wake and Simon Coward, who cover the main players in getting the series to the screen (including Shubik and Sydney Newman) and the missing episodes, all of which sound rewarding enough to make one wish they had somehow found a way to survive in the early days of TV production.