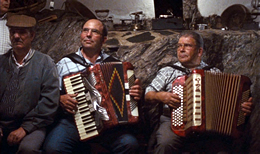 Already established as one of the world's premiere labels for uncovering hidden gems of world cinema, the UK's Second Run label sets its sights on a comparatively recent film from Portugal with Our Beloved Month of August (Aquele Querido Mes de Agosto). Though the title may sound like some sort of artsy analogy, it's actually one of the few truly literal things about the thing since it refers to the time of year in which a mountain village, Arganil, explodes with a vital local fesival filled with parades, amateur music p 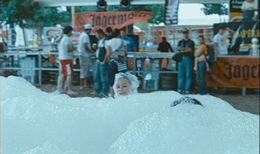 erformances, hunting, and the reinforcement of family and community ties. Mixed in with this documentary approach as it goes along is a self-reflexive approach in which the process of making the film becomes entangled with a fictionialized story about two cousins (Bandeira and Oliveira) whose mutual attraction is discouraged by her father. That description doesn't really do justice to the two-plus hours of the film, which borders on purely fantastic cinema at times as integrates folklore and tradition into the mix with surprising skill and unpredictability.

Some of this unique approach sprang from necessity when the original, more streamlined production was put on hold, forcing director Gomes to forge ahead anyway with a small crew shooting in 16mm during the real August festival. The experiment pays off as a seemingly straightforward snapshot of a colorful community ritual turns into a cinematically unique meditation on the act of storytelling itself. Are the people we meet in the beginning of the film real? Where does the line between scripted or improvsed playacting begin? After a while you won't care; soaked in vibrant images and sounds captured in rough but disarming quality, it's a notable 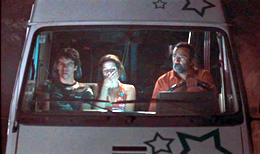 filmic gamble that should be more widely seen.

Second Run's DVD features a new anamorphic, director-approved transfer, which appears to be accurately framed at 1.66:1. The visual appearance here can be a little rough and even slapdash at times, but this is a quality inherent in the challenging shooting conditions. Overall it's very punchy and thoroughly pleasurable to watch, and optional English subtitles are included fro the stereo Portuguese soundtrack (reportedly the first English-friendly video release of this film anywhere worldwide).

Also included is an earlier 2006 short film by Gomes, "Cantico das Criaturas" ("Canitcle of All Creatures"), a wild, free-associative look at the divine nature of animals structured in unexpected methods around the story of St. Francis. The 16-page enclosed booklet also contains liner notes by Sight & Sound deputy editor Kieron Corless (who talks about encountering Gomes' work at Cannes and this film's unusual structure) and a brief note from the director about the project's origins.