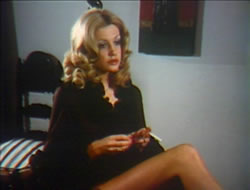 Tormented by nightmares involving her dead father and confined to a wheelchair, young and beautiful Melissa Comfort (Sinner's Prous) certainly has enough problems without having to worry about her conniving, backstabbing aunt and sister (Hansa and Tovar) whom the family butler believes want to kill off Melissa when the right occasion arises. Concerned about her mental state, Melissa's uncle calls in a mysterious shrink named Dr. Orloff (Keoma's Berger) who seems to know an awful lot about Melissa's past and seems to know his way around a hypnotic trance. Soon Melissa's having brand new nightmares involving the deaths of family members which might be happening in real life, too... 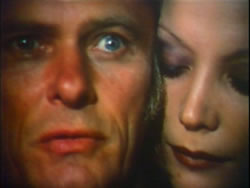 (or "Orlof," as he was originally named) in his first horror film, The Awful Dr. Orlof, and trotted him out every few years (usually played by the marvelous Howard Vernon) in a string of odd, mostly unrelated films, climaxing with the weird "greatest hits" package of Revenge in the House of Usher. The Sinister Eyes of Dr. Orloff is easily one of the most obscure entries of the Orloff cycle, with even the fleeting Spanish VHS tape ages ago failing to circulate much on the gray market. Oddly enough, it was later remade in the early '80s as Alone against the Terror starring Lina Romay (who has a quick role here), which circulated far more widely even if it never earned an English-langauge release either.

Intriguing Bangkok-based video label InterVision kicks off its diverse slate of releases with this title, salvaged from a video master reportedly uncovered in Budapest(!). The full frame presentation (complete with unnecessary black sidebars for 16:9 playback -- click on the frame grabs here for examples -- that will make this a maddening experience for the few folks left with 4:3 televisions) definitely hearkens back to the VHS era; it's soft, dull-looking, and slightly cropped from the original aspect ratio (probably 1.66:1 judging from the credits), but that's about the only option for now unless someone uncovers any film elements someday. Judging from 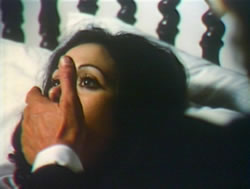 the 75-minute running time compared to the 82 minutes listed everywhere else, it appears to be an uncorrected PAL conversion, too. The packaging really pushes the sleaze angle hard, which does the film a bit of a disservice. It's a moody, fairly sedate thriller and a major change of pace considering he made A Virgin among the Living Dead and Female Vampire the same year. There's no nudity, while violence consists of a little bloody bathwater and a climax containing, as the MPAA would label it, "mild peril." What it does have in its favor is an interesting central concept, a compelling central performance from the Austrian-born Berger (who's a far more restained doc than Vernon would have played), and a nifty music score. Francophiles will find plenty to enjoy here, but if you're expecting a crazy sex-and-violence freakout, you're in for a surprise.

Along with the main feature (whose optional English subtitles are, to put it charitably, very idiosyncratic and prone to disappearing at odd passages), the DVD also includes a typically entertaining interview with the frail-looking Franco. He speaks in thickly accented English about the Orloff series, the reasons Vernon had to sit this one out, and the background of some of the more enigmatic crew members. He always seem to enjoy the films from this period and, as such, doesn't really get the opportunity to trash anyone in his usual fiesty style; add this one with modest expectations to your Franco library along with the mad doc's other, more readily available adventures in medical malpractice.